The Sacra di San Michele, an ancient medieval abbey in Val di Susa, is one of the landmarks of the Piedmont. It is also one of the most enchanting places in Italy, important not only for tourism, but also for Italian history and literature. A source of inspiration for countless forms of art, it has always evoked an intense mystical atmosphere frozen in time.

"Laughter kills fear, and without fear there can be no faith." (Jorge of Burgos in "The name of the rose")

The correct denomination of the Sacra di San Michele is actually Abbazia di San Michele della Chiusa. It is a monastic complex perched on the top of Mount Pichiriano, in the Municipality of Sant'Ambrogio di Torino, just 40 km from the Piedmontese capital. It seems to merge into the summit at almost 1000 meters above sea level and completely dominates the valley, offering beautiful images from any perspective. It is wonderful at any time of the year, but in winter, when it is covered in snow, it looks like a truly surreal landscape.

The Sacra di San Michele is built in Romanesque-Gothic style. Its construction began at the end of the 10th century, perhaps thanks to the will of the archbishop of Ravenna. The current appearance is however due to various phases of enlargement, from the 11th to the 14th century. One of the most unique details is the Staircase of the Dead, a stone stairway built on rocky outcrops, leading to the church. The complex is obviously dedicated to St. Michael the Archangel and is in fact located along a pilgrimage route that unites 7 sanctuaries dedicated to the saint in a straight line from England to Apulia. 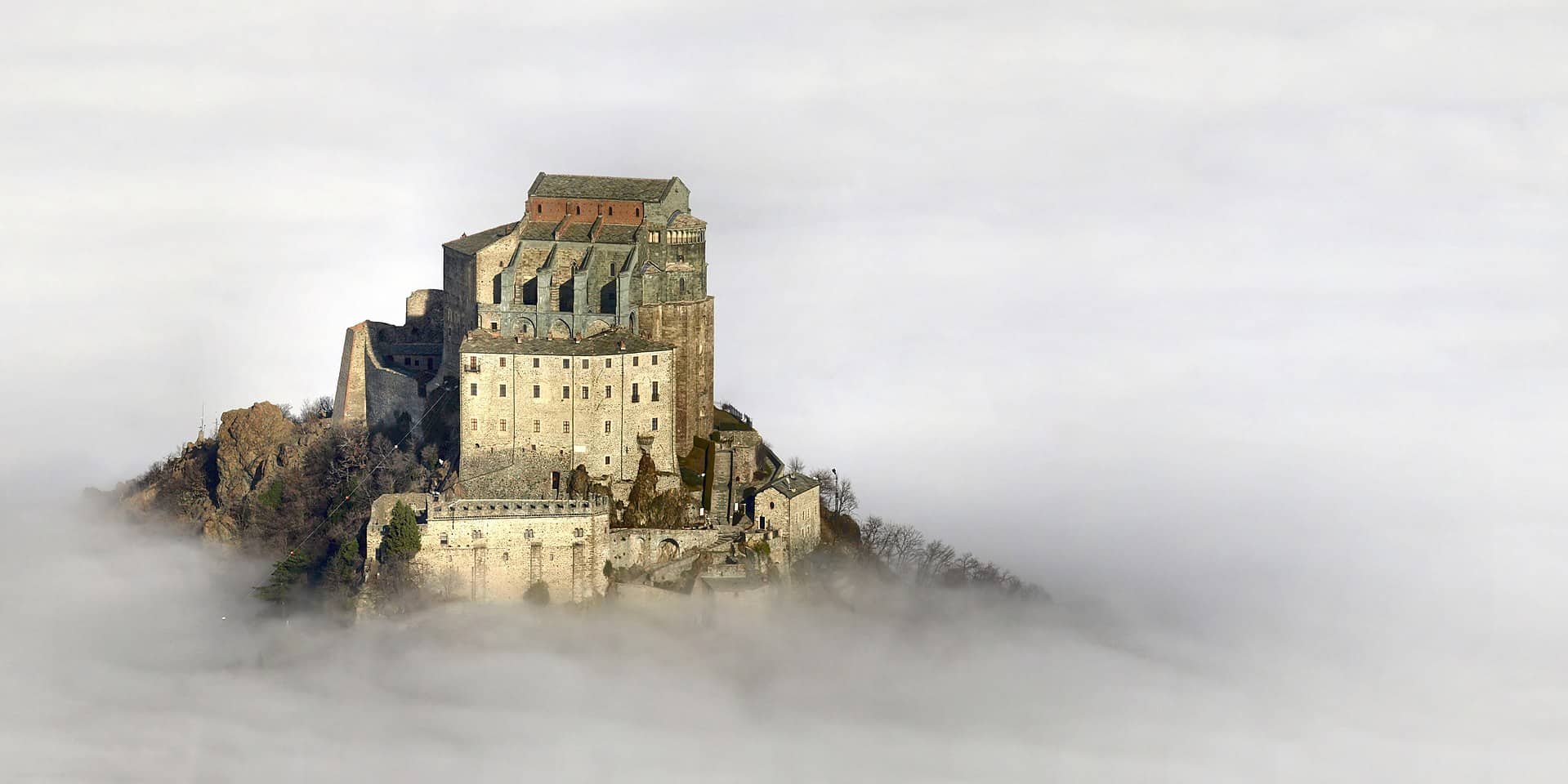 The abbey has always inspired great artists. The most important name linked to the Sacra is Umberto Eco. It is precisely this location that inspired his most famous novel: The name of the rose, translated worldwide. And for the same reason, this was the movie set of the 1986 film of the same name. Sean Connery played the leading character, the "detective" friar William of Baskerville. It also seems that a monk named William really used to live here in the 11th century. In 2015 the international photo contest Wiki Loves Monuments, launched by Wikimedia Foundation, was won thanks to a beautiful shot of the abbey.

The Sacra di San Michele is easily accessible from the villages of Chiusa di San Michele and Sant'Ambrogio, and also via the hiking trail called Dei Principi, which starts from Avigliana. The abbey is also located along the Via dei Franchi, and the Francigena one, ancient pilgrimage routes still very traveled. Every detail of the structure is suggestive, but more attention deserves the Bell'Alda Tower, linked to an ancient legend, then the library with its 10,000 ancient volumes. Also famous is the modern statue of Saint Michael the Archangel, sculpted in 2005 by Paul Doss-Moroder. But the best advice is to explore, discovering arches, portals, paintings, tombs and every corner hidden in the mysterious charm of this ancient place.