Timeless Sardinia: history and culture of the island in 10 stages

Here is a 10-stage itinerary of Sardinia's history, culture and archaeology. An incredible journey to discover a timeless island.

Sardinia lies in the middle of the Italian sea, born in an unspecified distant historical time. Ancient, magical and wild, it bears the marks of millenary civilisations and the patience of atmospheric events that have sculpted it as they wished.

A land of fairies and giants, dotted with mighty isolated palaces, it is home to stone forests, monuments unique in Europe, and unusual magic in the air. Sardinia is an island of disarming beauty, stories to hear, places to discover and legends that have always existed and never passed away. In its folk festivals and events, traditions and sights, you will discover a world unlike any other, one that goes straight to the heart.

Here is a beautiful 10-stage journey to discover the archaeology, history and culture of North Sardinia, the area that today corresponds to the provinces of Sassari and Olbia-Tempio.

First stop: the Tombs of the Giants - Arzachena

To immerse ourselves immediately in the mysteries of Sardinia, we begin our journey from Arzachena in eastern Gallura. This area is rich in enigmatic constructions. According to popular belief, they were the graves of the giants who walked the Earth.

The Tombs of the Giants consist of a series of slabs driven vertically into the ground arranged in a semicircle, with a rectangular apsidal base behind them. Observed from above, they draw the snout of a bull (symbol of male divinity).

Legend has it that vast bones were found here. At the same time, history states that they were monumental collective burial sites belonging to the Nuragic civilisation that inhabited Sardinia between 1800 BC and the 3rd century BC.
The most striking ones in the Arzachena area are Coddu Vecchiu and Li Lolghi.

Continuing our journey towards the island's centre, we arrive in Luras, a small village in Gallura. Here, a private ethnographic museum faithfully reconstructs the typical environments of the Gallura civilisation, communities of shepherds, farmers, and craftsmen. The Galluras museum is famous because it also recounts a page of Sardinian history featuring a controversial, feared and respected figure: the 'Femina Agabbadòra'.

According to tradition, this woman was 'the one who helped the dying to pass away'. In the poor society of the time, an incurable disease often became an unbearable burden for the terminally ill, who suffered a long agony but failed to die, and for the relatives. Called by family members, she would enter the dark room of the sick person, chant the rosary and some dirges to put him to sleep, and then hit him on the skull with her hammer. This mysterious woman, dressed in black, remains a figure between myth and reality, inextricably linked to the history of Sardinia.

An ancient legend has it that, in the darkness of the night, one could hear the sound of the looms of the Janas coming from their houses carved into the rock. This little half-fairy, half-witch beings were skilled creators of magical jewellery made of a fine weave of gold and precious stones. They said that, with the same skill with which they wove gold fibres, they wove people's lives together.

The Domus de Janas (literally 'Houses of the Fairies') were prehistoric burial grounds. The oldest among them dates back 5000 years. More than 2400 Houses of the Fairies have been discovered throughout Sardinia. Even in the north of the island, some very suggestive ones are worth visiting, including the Domus de Janas in Sedini called the 'Rocca'.

Right on the village's main street, in a position overlooking the inland hills, it is carved into a rock boulder as high as a three-storey building. Dating back to the third millennium B.C., it has been used for various purposes and now houses an ethnographic museum.

Lost in Anglona, in the heart of northern Sardinia, are the stone remains of an extinct world belonging to an era far older than the appearance of man on Earth.

The forest of Carrucana, in the countryside of Martis, is formed by the gigantic fossil trunks of a forest that existed millions of years ago. A violent volcanic eruption caused the forest to sink into the surrounding lakes, and the ash did the rest. Thus was created this silent world of stone.

The Palaeobotanical Park of Anglona protects this priceless heritage, which extends over an area of around 100 square kilometres. In addition to the municipality of Martis, it involves Bulzi, Laerru, Perfugas and a few patches of Chiaramonti and S.M. Coghinas.

Fifth stop: the ruins of the ancient Doria castle - Chiaramonti

About a 10-minute drive from Martis, perched on a hill dominated by the ruins of a medieval manor, is the small village of Chiaramonti. The castle was one of several fortifications erected by the Ligurian Doria family, who built it in the 12th century to protect their possessions in Anglona.

What we see of the building today is the outline of the tower and a single-naved structure with eight chapels opening on the sides. In fact, after the Aragonese conquered the castle, this area was turned into a church. But perhaps the most striking spectacle is the view that extends endlessly from here over the entire Anglona valley, even giving a glimpse of the coast of Corsica. 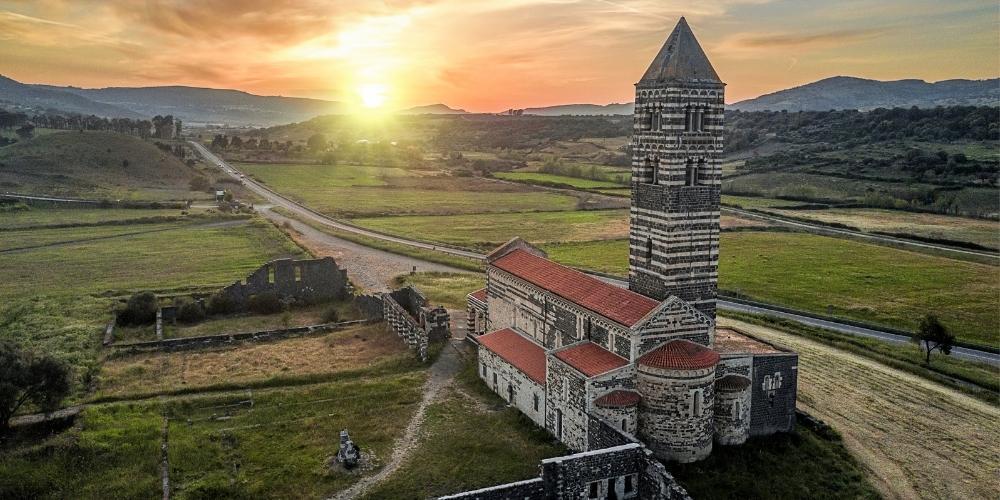 Moving further southwest, amidst the silence of the Sardinian countryside, a tall bell tower appears in the distance. It is the Holy Trinity of Saccargia, the most spectacular Romanesque church in Sardinia, in the territory of Codrongianos. The basilica was erected on the ruins of an earlier sanctuary, built by architects of various Tuscan schools and consecrated in 1116. Next to the church's black-and-white horizontal striped austerity, you can see the ruins of the abbey's monastery and cloister.

The area where the basilica stands has always been considered sacred (called 'Sacraria'), and ancestral cults were practised here. A detail decorates the frame of the left pillar of the façade portico: figures of squatting caws. They refer to the legend that, every day, a cow came to the monastery to offer its milk to the monks: s'acca argia, 'the dappled, spotted cow', from which, in the past, the name Saccargia was believed to derive.

In times long past, men erected enormous stones in honour of their deities and ancestors, testimonies of a past that, heedless of the millennia, have come down to us. This prehistoric phenomenon is called Megalithism and its most typical expressions, 'dolmens' and 'menhirs', can be found scattered here and there in the Sardinian hinterland.

Continuing our journey southwards, we arrive in the territory of Mores. Here, on the flat surface of a trachytic plateau, a stone giant appears from a distance: the largest dolmen in Sardinia.

The importance of the Sa Coveccada dolmen goes far beyond the island's borders. It is among the most important constructions of its kind in the Mediterranean area, 2.70 metres high, 5 metres long and 2.5 metres wide. It consists of four slabs of trachyte of a light colour, tending to pink. It was a collective tomb that the ancient builders decided to orient towards the rising sun to the east-southeast. Thousands of years ago, the ancient Sardinians erected unique constructions so sturdy that even today there are more than 7000 scattered all over the island. The Nuraghi are undoubtedly one of the symbols of Sardinia, truncated cone-shaped buildings made of enormous dry-stone boulders. It is still unclear what their function was. Still, the most plausible explanation is that it changed depending on the location and the environmental context in which they stood. They could have had a military or defensive role; they could have been watchtowers, astronomical observatories or places of a votive and religious nature.

Continuing our journey towards the island's centre, we arrive in the territory of Torralba. Here, in the so-called 'Valley of the Nuraghi', is the nuraghe of Santu Antine, dating back to the 15th century B.C. It represents the apogee of Nuragic architecture, with a mighty donjon surrounded by thick walls, three towers, and the village. Walking inside Sa Domu de su Re ('the king's house') is a chilling, unforgettable experience.

We head west, towards the coast. Here, among silvery cliffs and the shimmering reflections of the sea, a place lost in time appears: Argentiera. This hamlet is an important testimony to Sardinia's mining past. It takes its name from the mineral extracted and the colour of the rocks. In an unusual, strident silence, you will find yourself in front of abandoned mining facilities and an (almost) uninhabited village.

The mining practice, here, has a long history, and cave-ins and misfortunes have fuelled legends about the souls of miners still roaming the tunnels.

Our journey ends at the foot of a monument without equal or apparent explanation. Between Sassari and Porto Torres, along the 'old' state road 131, lies a unique construction in the Mediterranean basin. It is a ziggurat identical to Mesopotamian temples, although they have no direct relationship.
Legend has it that it was built by a prince-priest who fled the Middle East and, instead of dedicating it to the Sun as was customary, dedicated it to the Moon.

The altar of Monte d'Accoddi (meaning 'mountain of stones') was built in two successive phases, between 3500 and 2700 BC. It was discovered around the middle of the 20th century, excavating what appeared to be a small 'artificial' hill in the middle of a plain. We imagine the astonishment when a structure of 1600 square metres and almost six metres high emerged from the excavations (initially, it seems to have been eight).

We say goodbye here, gazing spellbound at yet another wonder of Sardinia, one of the most incredible. One of the many pieces of an often little-known history that accompanies us in a limbo between truth and myth.