Situated more than 1400 metres high, on the tip of a ridge, the Castle of Rocca Calascio is among the highest fortifications in Italy. The majestic medieval structure has inspired numerous films such as "In the Name of the Rose" and "Ladyhawke". The beauty of the fortress lies in its shape and in the way it can blend in with the surrounding area.

The history of the castle

The castle is a purely military building, its origins are very ancient and date back to the year 1000. Its foundation is attributed to Ruggero II d'Altavilla, who wanted the castle to be built after the Norman conquest. In the following centuries, numerous families followed one another in the dominion of the fortress until it was mysteriously abandoned. At the foot of the latter, there are the ruins of an ancient village. In 1703, an earthquake destroyed the small village and seriously damaged the fortification. In 1989, architectural renovation works were carried out to restore the structure. Today, the castle can be visited and is a starting point for trekking and mountain excursions in the Gran Sasso National Park. The striking structure is made entirely of limestone, the colour of milk white. It has a square plan and is flanked by four cylindrical towers at the corners of the large central keep. The entrance to the fortress was through an opening on the eastern side, five metres above the ground. Access was through a retractable wooden bridge resting on stone brackets. The castle served as a defence and military observation post. Thanks to its favourable position, from Rocca Calascio it was possible to communicate with other castles on the Adriatic coast by means of torches and mirrors. Today it is one of the most spectacular tourist destinations on the Gran Sasso, immersed in wild nature and offering visitors a view of the main mountain ranges of the Apennines. 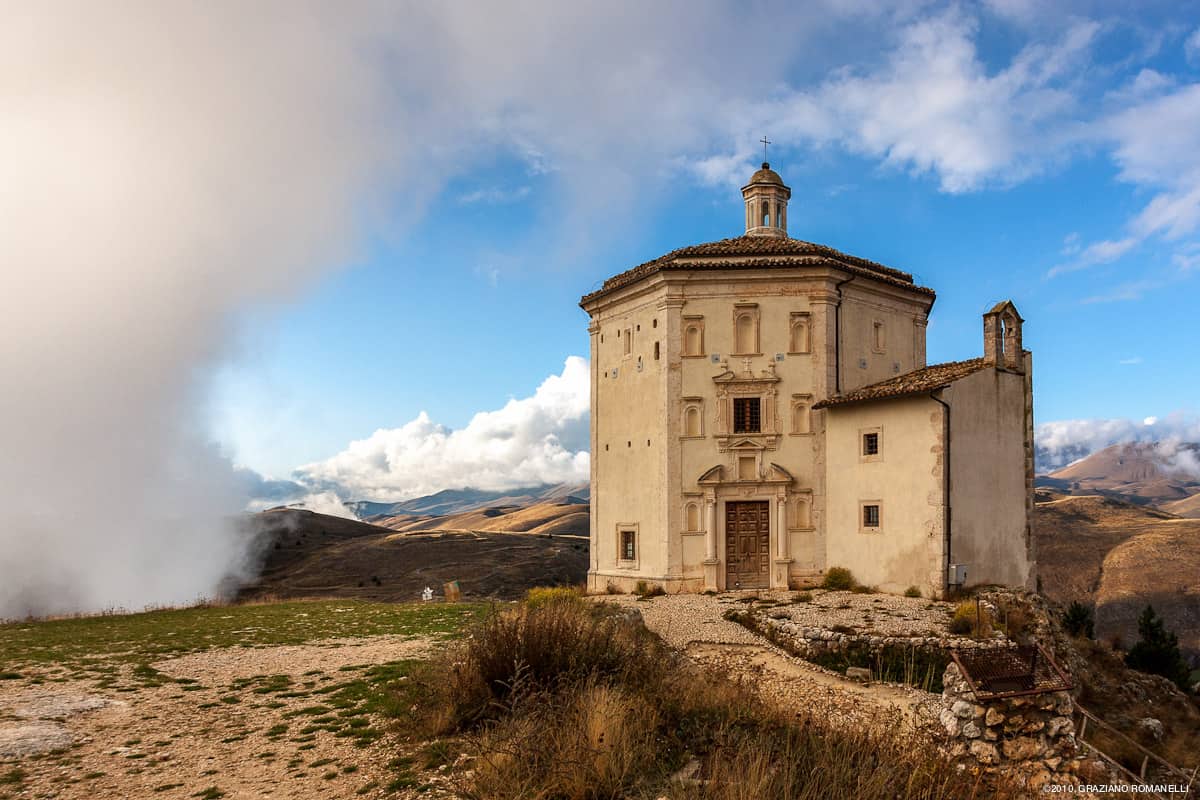 Not far from the fort is the Church of Santa Maria della Pietà. An octagonal building erected in 1596. According to legend, the people of Rocca Calascio built the church after defeating a band of brigands. The church is very large for such a small village and is a rare example of an octagonal church. Inside, there is a depiction of the Miraculous Virgin Mary and a sculpture of an armed St Michael. The church, now a simple oratory, is visited by the faithful and the devout. The site also has an extraordinary landscape value due to its location.

How to arrive to Rocca Calascio

You can reach Rocca Calascio Castle by car. From the A24 motorway, exit at L'Aquila Est and continue towards Sulmona. Once in the S. Stefano di Sessanio area, the next village is Rocca Calascio. Follow the signs for the Rocca and you will find yourself in the presence of the imposing castle.

From here you can take numerous walks along the trails of Gran Sasso Park, either on foot or by bicycle.