Sunny Sicily surprises all palates with the tastiest cold dessert ever: the granita! Let's find out the Palermo recipe one.

The Palermo granita is the pride of Sicily, an incredible triumph of flavour that refreshes and delights the island's sunniest summers. But how did such a delicacy come about? And what flavours can we find? Read the article to find out all this and much more, including the country that, according to myth, gave birth to this tasty cold dessert and more!

Who remembers anymore the snow that the carts brought down from the mountain snow-boxes, covered with salt and straw, and which was shouted for sale in the streets and bought from the houses to cool the summer canteens? Two pennies' worth of snow, four pennies' worth: and it was put into the hollow of certain bottles (I have not seen any more around), to keep the water cool, to make those very strong red wines give the illusion of lightness. Half a lira's worth of snow was then enough to freeze that mixture of water, sugar, lemon and egg whites beaten to a froth, which was the granita: the granita of the past which, fortunately, can still be found in some out-of-the-way towns

The Sicilian Granita: why is it so well-known? Facts and history

From Sicily to the outer North region: the sicilian Granita is a must on the Italian tables. But where does it come from? Since Medieval times, the nivaroli tradition had been consisting of picking up the snow from the Etna Mounth and from the Madonie as well, in order to recollect it and then bringing it to the seaside in the hotter days for the production of syrups or lemon juices. But the real origins of the Sicilian Granita are to be found mainly in Catania and Messina cities, then developing in Palermo, too. This is how a real Granita should be served: into a glass, with an opaque colour and taken from the ice-cream small container.

Brioche and granita of Palermo: an irresistible taste! 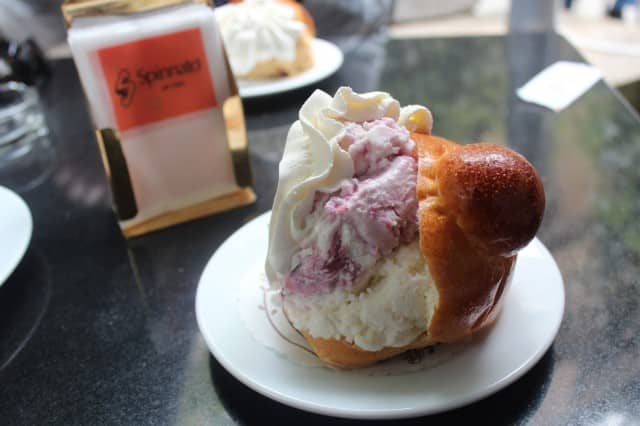 The Palermitan granita differs a lot from the classical one, thanks to its "consistency": it is less creamy and more grainy (almost glassy), but it is possible to taste it with thousands of different flavours: lemon, almond, pistachio, coffee, jasmine and cinnamon, strawberry, mulberry, watermelon, and peach in a blaze of fresh and thisrty colours. But what makes a Palermitan granita so special? Of course, the fact that it is accompained by a soft and hot pastry. Its characteristic consists of being a flavored sweet prepared with eggs, whose glummetiello (or the italian tuppo) is used to make the most of the consummation. It can also be tasted with iced tea, a lager or some bread. But if you want to really taste it, you have to come in Palermo!

The myth of Sicilian granita

It is said that the origin of the Sicilian granita is to be found in the village of the Malavoglias in Acitrezza. The inventor is the cook Francesco Procopio dei Coltelli, who lived between Sicily and Paris at the turn of the 16th century. At the Casa del Nespolo Museum in Acitrezza, you can discover the fascinating story of the birth of the world's most famous cold dessert.

It is said that Francesco Procopio dei Coltelli, developed his skills as a pastry chef while living in the seaside village of Acitrezza. He was a former fisherman who converted to the production of a dessert so sweet and fresh that it improved the life of his whole town, which was notoriously hot. The invention of the granita earned him the title of "father of ice creams". His enormous success prompted him to move to Paris, where he opened the first Italian ice-cream parlour.