Sicily on the road: what to see in a week in Sicily by car

If you love to explore while on vacation, this guide is for you. This itinerary will take you to discover Sicily in 7 days by car.

Sicily is one of the pearls of the Mediterranean. From Messina to Palermo, passing from San Vito lo Capo, Taormina, and the Scala dei Turchi in Agrigento. What you are about to read is an on-the-road tour that in a week, or at most 10 days, will take you to discover the best Sicilian stops.

Here are the best stops on the island South of Italy. 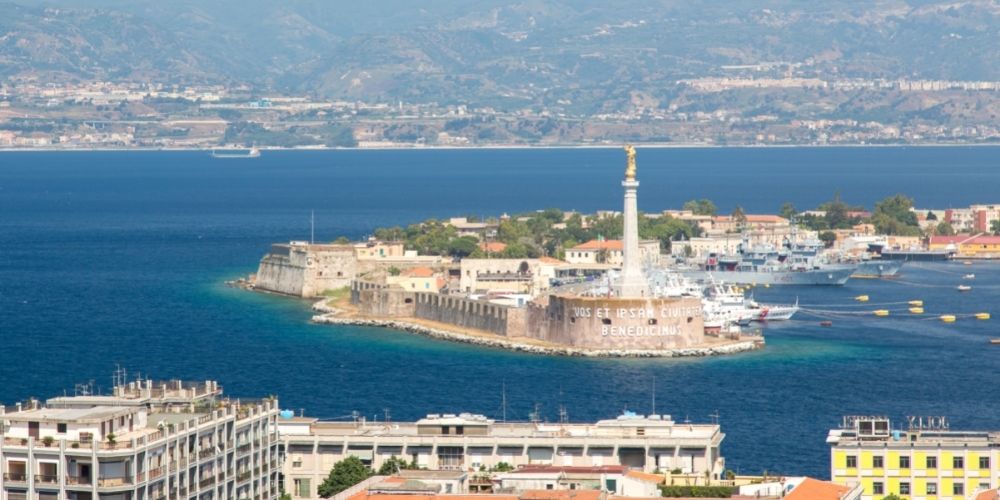 Messina is the first stop, but it can also be the last stop of this tour on the roads of Sicily. Messina is one of the main cities of Sicily and offers many attractions. The first attraction is undoubtedly the Cathedral of Messina, which stands on the remains of a Roman basilica. Particular the facade in which there is a mixture of styles and different eras. Next to the Duomo, there is the bell tower. It hides one of the city's curiosities, namely the astronomical clock.

9. Cefalù: the city of the Christ Pantocrator

Cefalù is one of the flagships of all of Sicily, and here, you can spend the second half of the day. Two hours away from Messina, with the highway that runs along the sea. You can reach the city at sunset.

You will be able to enjoy the sunset on the Cefalù seafront, visit Porta Pescara and the fantastic cathedral of Cefalù with the famous mosaic of Christ Pantocrator.

8. Palermo: among markets and churches

The road trip continues in Palermo. Visiting Palermo in one day is a fundamental step because it allows you to discover a city of art, culture, history and markets of typical and local products.

One of the things to see is the Cathedral of Palermo, the symbol of the city. The composition of several architectural styles makes it a unique architecture of its kind. The yellow stone exterior features Roman, Byzantine, Arab, Norman, Aragonese and Bourbon styles and influences, while the interior is a riot of white.

Among the Palermo markets, the oldest and most famous is Ballarò. Here you can try the typical products of the Palermo countryside and try the famous pani câ meusa (sandwich with spleen) and sfincione (tall focaccia with tomato and provolone. One of the best attractions in Palermo is the Church of Santa Maria dell'Ammiraglio, also known as the "Martorana", interiors rich in mosaics in which the blue and gold colours are the masters.

The next day we leave for San Vito Lo Capo. In half a day you can take a walk along the seafront to the Macari viewpoint, swim on the white sand beach that recalls the Caribbean seabed and visit the legendary Tonnara di San Vito Lo Capo built-in 1411.

After lunch, we leave for the Scala dei Turchi in the province of Agrigento. A marl cliff, that is, an ice-white rock that faces in contrast with the blue of the sea.

Its position sheltered from the winds makes it a very popular destination in which to spend a summer day. Despite being difficult to reach, it is one of the most popular destinations in southern Sicily. Once the sunset is over you can reach Porto Empedocle for a dinner and in the evening in Agrigento.

5. Agrigento: the Valley of the Temples 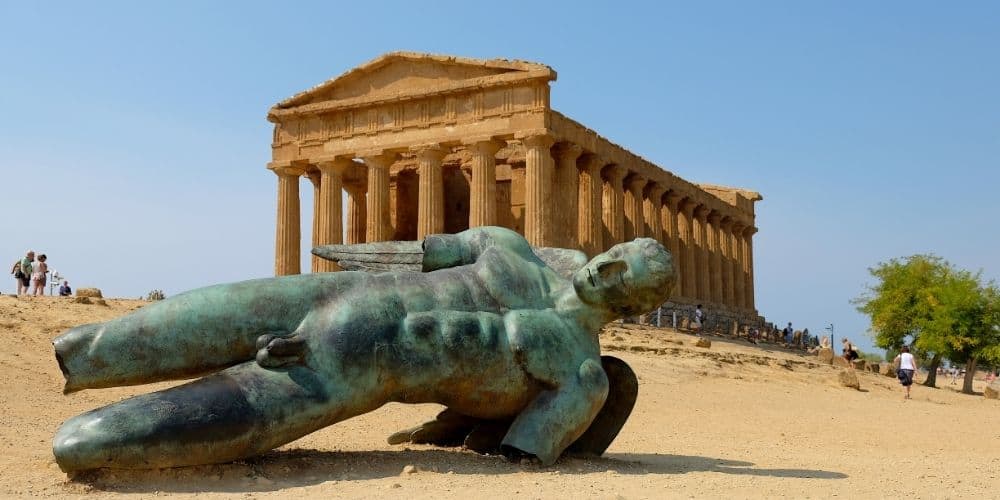 The tour of Sicily on the road, after the night in Agrigento, continues with a visit to the Valley of the Temples. The Valley of the Temples is the attraction par excellence of all of Sicily. It is part of the UNESCO World Heritage Site and is located about 20 minutes from the centre of Agrigento. In the park, there are 8 temples, built between 510 and 430 BC.

Among the 2 most famous are the temple of Concordia and the temple of Hera. They are the best-preserved and that gives you a glimpse of their grandeur.

4. Syracuse and island of Ortigia

After the journey through antiquity, the next stop takes you to Syracuse. In the early afternoon in Syracuse, your tour can start from the island of Ortigia and its Arethusa source, the Cathedral of Syracuse and the church of Santa Lucia alla Badia, famous for "The burial of St. Lucia" by Caravaggio.

If you are not tired of the archaeological paths after the valley of the temples, the Archaeological Park of Neapolis deserves to be visited. 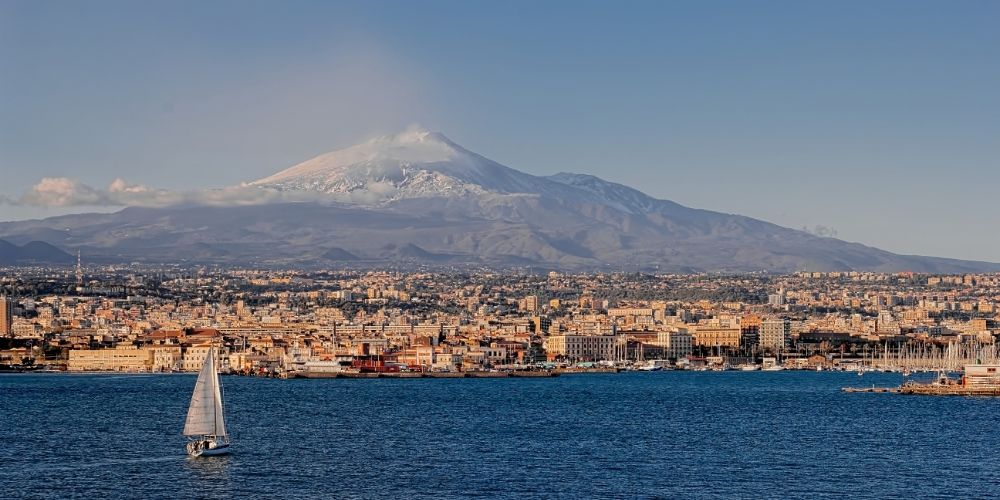 One of the last stages of this trip to Sicily on the road is one of its main cities: Catania. It is called the black city ”thanks to the predominant use of volcanic stone in its architecture and in the presence of the mammoth volcano, Etna.

Most of Catania's attractions are located in the historic centre, a UNESCO World Heritage Site. Among the best attractions is the Roman amphitheatre from the 2nd century AD. C., Piazza Duomo with the Elephant fountain (symbol of the city) and the Cathedral of Sant'Agata.
Catania, however, offers a culinary tradition. It's celebrated in all of Sicily for its cannoli and the famous arancino (do not get confused with the rival the Palermo arancina).
At this point of the trip to Sicily on the road, you may need support with your car and in Catania. Centro Auto Pruiti offers a wide range of services for the maintenance of your car, but also a 24-hour breakdown service and short, medium and long-term car rental. An example of efficiency and competence at your service for every need.

2. The park of Etna and Giardini Naxos

On the morning of the sixth day, you can try one of the most particular naturalistic experiences of the whole island, namely the visit to the Etna Natural Park. This area includes several municipalities (including the famous one of Bronte) where paths, paths, caves and particular fauna give you an environment that is more unique than rare to find elsewhere: among these, you cannot help but visit the gorges of the Alcantara.

Once this excursion into the nature of Catania is over, you can reach one of the most popular destinations of the moment, on the Sicilian east coast: Giardini Naxos. Until a few decades ago, Giardini Naxos was a quiet fishing village, while now it is a small bay protected by hills with a crystal clear sea that attracts tourists from all over Italy.

The last stop on this itinerary is one of the most famous and sought after destinations in all of Sicily: Taormina. The splendid Sicilian town has attracted poets and artists from all places and times. You can reach Taormina to see its famous Greek-Roman theatre, stroll along the medieval streets of its historic centre and enjoy its wonderful beaches.

Many have judged Taormina as a paradise on earth. We have thought that is the best destination to conclude this tour of Sicily on the road in 7 days.