You can discover the most famous and traditional Carnival recipes in this gastronomic tour across Italy. Our topic will be Carnival cakes.

An explosion of colors with its confetti, masks, parades, floats and joy.

The Carnival, dating back to the Middle Ages (approximately the 8th century), over the centuries has been taking different shades in the different areas of Italy where the celebrations of each region and peculiar colorful masks are accompanied by unique gastronomic specialties.

As a matter of fact, in this particular period of the year, as tradition dictates, we commit real gluttony. In every region, the main recipes of the Carnival are based on fried pastries to be tasted in cheerful mixed trays decorated with powdered sugar and colored pralines.

From North to South, each region has its own typical carnival desserts, delicacies that have delighted our palates for generations, especially during Carnival. Delicious and usually fried desserts which, with centuries of history, are made with simple ingredients available in every pantry such as flour, milk, butter, eggs, sugar and honey. In short, there is something for every taste! 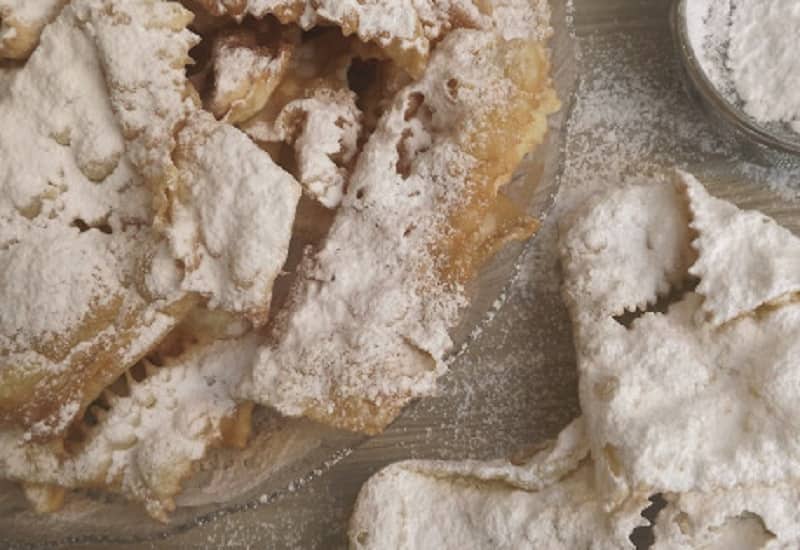 The undisputed protagonists are the “chiacchiere” (so called in Parma, Umbria, Campania and Basilicata), present in practically all regions with different names such as “frappe” (in Rome, Viterbo and Ancona), “cenci” (in Tuscany), “crostoli” (in Friuli-Venezia Giulia and Trentino-Alto Adige), “galani” (Veneto) and “bugie” (in Piedmont and Liguria).

Carnival pastries par excellence, they are thin strips of fried dough made with flour, butter or lard,eggs, sugar, a pinch of salt, powdered sugar and peanut oil for frying. Once a homogeneous mixture is obtained, a round sheet is created with a rolling-pin to be cut into strips with a toothed wheel and then fried in boiling oil until they reach a nice golden color. Finally, they are sprinkled with some powdered sugar. 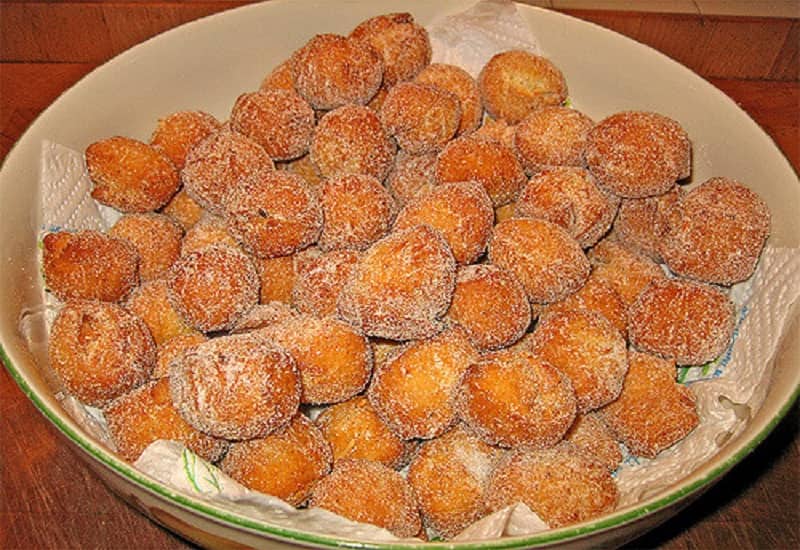 The “castagnole” (Emilia Romagna, Friuli-Venezia Giulia and Latium), on the other hand, known as “Tortelli” in Milan, are small balls made with butter, sugar, grated lemon peel and yeast, fried in seed oil and covered with powdered sugar. For those who prefer to experience something different, it is possible to add the ricotta cheese to the dough, in order to make Castagnole softer. 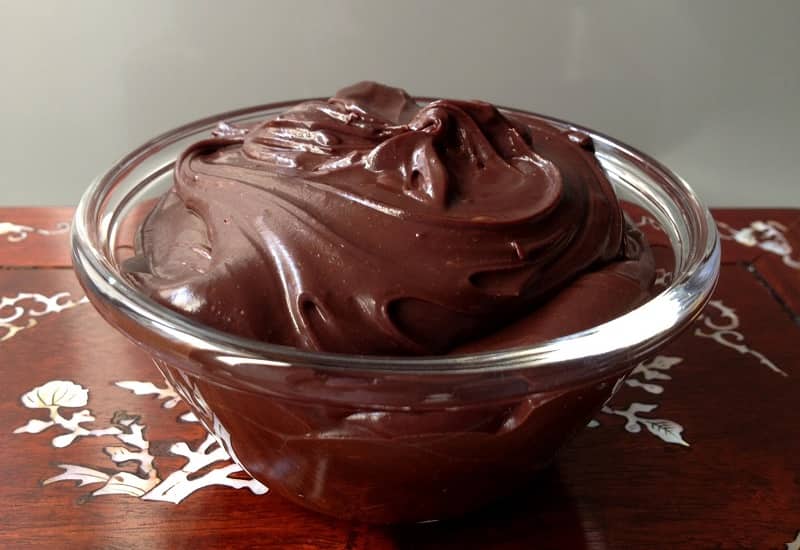 Then we have the “sanguinaccio”, widespread in various Italian regions including Liguria, Marche, Abruzzo, Campania and Calabria. A delicious cream made with dark chocolate, cocoa, milk, sugar, pieces of cedar, flavored with cinnamon, rum and vanilla to be served with the frappe or savoiardi cookies. Until a few decades ago, Sanguinaccio included pig's blood (nowadays prohibited) which was collected during slaughter and subsequently filtered and mixed with the above mentioned ingredients. Typical of the Neapolitan tradition is the Migliaccio, formerly prepared with polished millet flour, from which the name derives, later replaced by semolina. It is a very simple recipe but it requires a lot of patience. The ingredients (semolina, ricotta cheese, eggs, milk, sugar, vanilla, a pinch of cinnamon, cedar and wildflower aroma) are mixed on the heat to give rise to a mixture to be baked for about an hour, until a nice gold color is obtained. Some varieties involve the use of a special format of pasta called “capelli d'aneglo (literally angel hair), that is, very thin spaghetti. In Emilia Romagna, there is a different version of the Neapolitan Migliaccio, with the use of the following ingredients: pig's blood, dark chocolate, cocoa, milk, candied fruit, eggs and breadcrumbs. This mixture will then be used to fill a dough that will be baked in the oven. 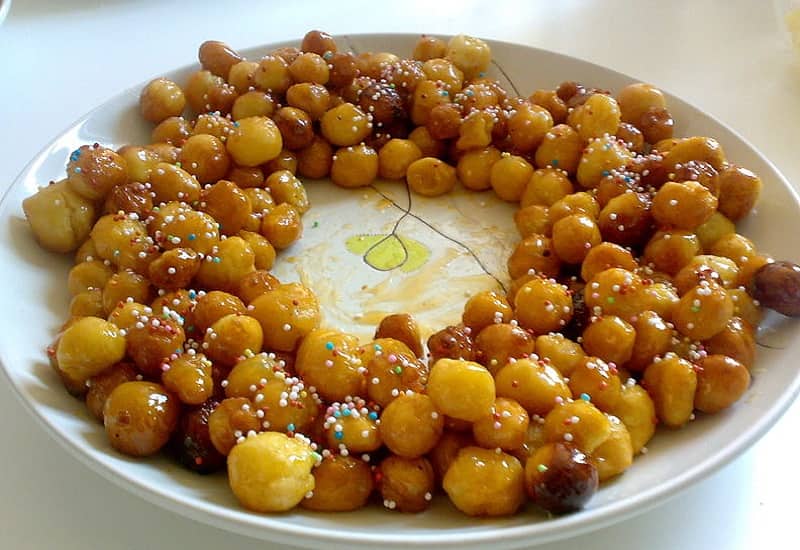 Of Umbrian origin but widespread as well as in the nearby Marche and Abruzzo, the “cicerchiata” is prepared with a dough made of flour, grated lemon peel, butter, sugar and mistrà - a sweet liqueur from central Italy -, fried in seed oil and topped with honey and colored sugar sprinkles. It comes in the form of many pieces of "chickpeas", hence the name itself, and the famous struffoli will undoubtedly come to mind to lovers and connoisseurs of Campania's gastronomic traditions. 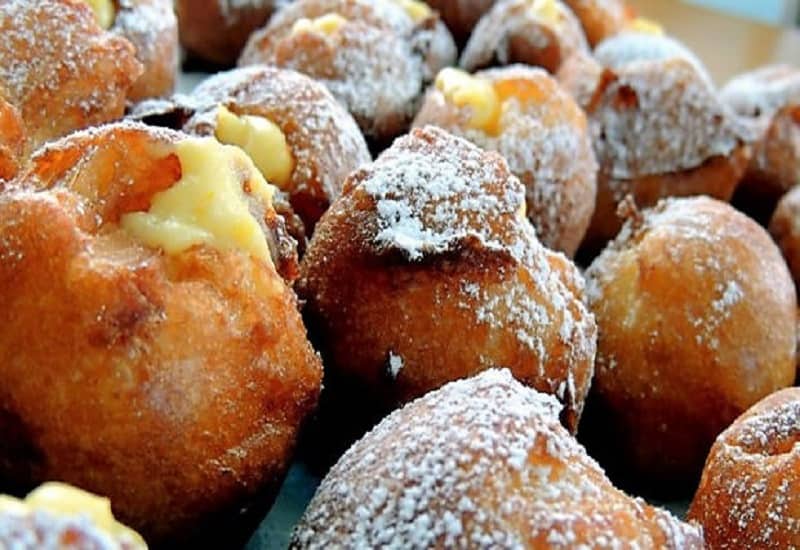 With their ancient roots dating back to the period of the Serenissima, the Venetian “fritole” until the nineteenth century were kneaded directly in the street (a real street food) on large wooden tables and fried in very large pans. The recipe for these delicious “frittelle” involves the use of flour, eggs, sugar, raisins, milk and rum and, once cooked, they are sprinkled with granulated sugar.

The Arancini from Marche Region


The Marches arancini, not to be confused with the typical Sicilian rice-based arancini, are fried pastries made with flour, oil, milk and eggs. With their characteristic pinwheel shape, they are made by rolling the dough sheet (previously covered with granulated sugar, lemon peels and grated oranges) and, finally, cutting it into slices.

The Schiacciata from Tuscany

Instead, typical of the Chianti area (Tuscany), the “schiacciata” also known as “stiacciata” is a soft baked cake made with flour, sugar, eggs, brewer's yeast, milk (or water), lard and orange juice, which makes the dough particularly perfumed.

Stuffed with boiled and crushed chestnuts, dark chocolate and liqueur, then fried in abundant seed oil, the “ravioli di castagne” are widespread in the Piceno area (Marche). 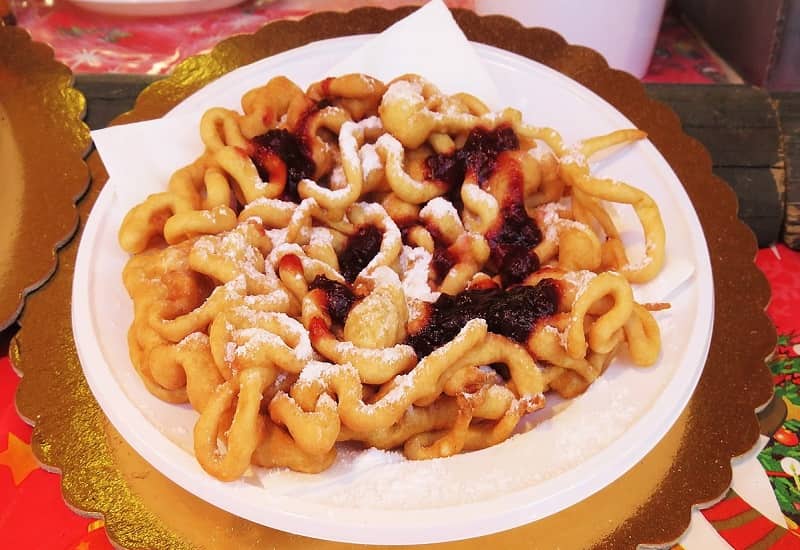 The “strauben” are sweet and tasty pantries of South Tyrolean origin (Trentino-Alto Adige) made with milk, flour, eggs and grappa liqueur. Their characteristic spiral shape is obtained by passing the dough through a special funnel. Once fried, the strauben are served with sugar and, depending on tastes, with cranberry jam or apple or pear compote.

Finally, the “graffe”, a sort of fried donuts covered with sugar, a typical Neapolitan dessert prepared in the rest of Italy mainly to celebrate Carnival, could not be missing. A traditional and simple recipe made with flour, potatoes, butter, yeast, granulated sugar, grappa, grated lemon peel, oil for frying.

At the end of this long and tasty roundup of proposals, whatever the choice you make ... the taste is guaranteed!