Vintage trains: 5 unmissable places you need to visit in Italy

Are you passionate about railway history? All aboard, hop aboard in the history of vintage trains!

On 3 October 1839, in the presence of Ferdinand II, King of the Two Sicilies, the Naples-Portici line was inaugurated, Italy's first double-track railway line with a total length of 7.2 km. With the advent of the Unification of Italy (1861), the system of railroads consisted of approximately 2,700 km: building railroads meant connecting Italians and were, in the collective imagination, the emblem of national unity.

Many symbols of Italy's development link the railways. It is the case of the "Porrettana" line (1864), which crossed the Apennines for the first time, overcoming Italy's open and often treacherous geographical constitution.

Visit Italy in this article will introduce you to some of the symbols and experiences that will make you experience a real dive into the past of the national railway history.

I stopped waiting for the train when I realised that the train was me. Whoever wants to travel with me will always find a place. Whoever doesn't will stay at the station. 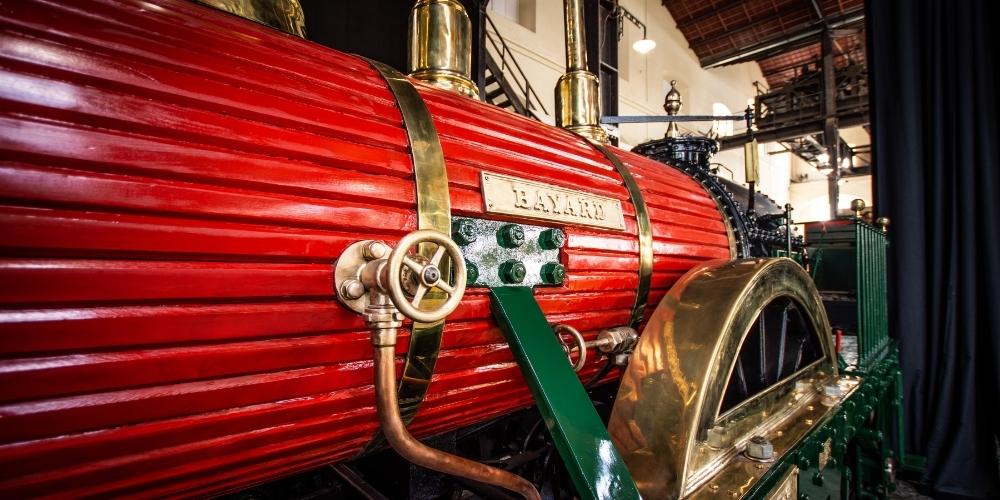 An old Bayard locomotive of that time, today preserved in the Pietrarsa Museum in Campania

Once upon a time, a king knew about the first puffing train on British rails and wanted to build his railway line...

As everyone knows, the Kingdom of the Two Sicilies built the first Italian railway line to connect Naples to Portici. The train arrived at Granatello di Portici. The arrival station was between the Royal Palace of Portici and Villa D'Elboeuf, purchased by the Bourbons in 1742 and joined the Royal Palace. This large park represented the sea outlet of the Royal Residence.

The Bayard Station is the first railway station built in Italy (1839).  The street was called 'via de Fossi' when the station was operating. Today, it is now Corso Garibaldi, a short walk from Piazza Guglielmo Pepe, the Church of the Carmine, the central Piazza Mercato and close to the ancient Aragonese walls in Via Marina. 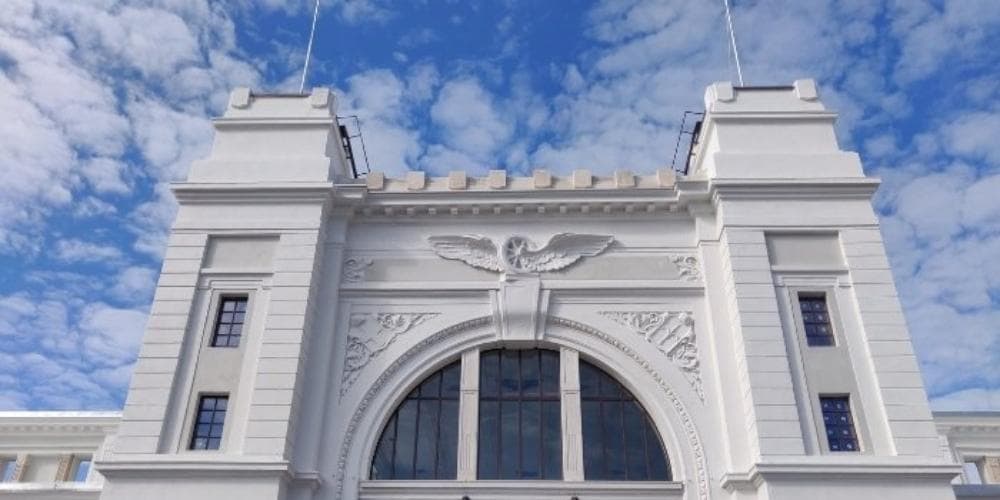 The next stop of our journey on historic trains is Trieste. Here you will find the Campo Marzio museum, a space completely dedicated to the history of the Italian railway.

The museum is located in an area of Trieste's Campo Marzio station, in a fascinating Liberty building, which is a concrete testimony to the complex history of Friuli Venezia Giulia and the lands of the former Austro-Hungarian Empire, Istria and Dalmatia.

Built in 1906 at the behest of the Habsburgs, the then Sant'Andrea Station was part of the Empire Railways. At the end of World War I, it became part of the State Railways, only to see its service suspended in 1958.

The museum houses numerous relics related to Italian railway history: models, dioramas, and old equipment. But the highlight of the collection is found outside the building.

Here, on four truncated tracks, incredibly valuable vehicles are exhibited: carriages and locomotives of German and Austro-Hungarian origin, obtained for war damage. This place is a unique testimony to the historical events of these lands and is a must-visit in order to fully understand the most recent Italian history.

3. Getting on the Trans-Siberian Railway of Italy

The train is one of the most environmentally friendly means of transport: even when travelling at high speed, it has little impact on the environment. The train does not create traffic, traffic jams or other urban horrors. Taking a simple regional Italian train is almost always cheaper than travelling on the motorway.

One of Italy's most beautiful and scenic railway routes is the Trans-Siberian Railway of Italy or "Ferrovia dei Parchi". It is a historic train that runs from Sulmona to Roccaraso in the province of L'Aquila: one of the most authentic routes in Abruzzo. It is known as the "Trans-Siberian Railway" because, when travelled in winter, it gives the sensation of being in Siberia.

The line is one of ten in the FS Foundation's "Timeless Trails" project. It runs through the Majella National Park and highlands of Abruzzo. A long stretch at an altitude of over a thousand metres, with gradients of up to 28%. A winding and difficult railway, crossing mountains and narrow gorges.

It has a fantastic route and panorama. But as well as the places it passes through. The train itself is worth the journey: a vintage train built between 1930-40 with "Centoporte" and "Corbellini" carriages pulled by diesel locomotives. You can relive all the atmosphere of almost a century ago when travellers took their seats on those same wooden benches.

Oh, the passenger He rides and he rides He sees things from under glass He looks through his window's eye He sees the things that he knows are his He sees the bright and hollow sky He sees the city asleep at night He sees the stars are out tonight

The train is like a theatre on the world, a scene from a film, a novel. In each carriage, a chapter unfolds, full of characters (the passengers), all with their own story and experience.

This time, on the stage, there is Porrettana Express. A project to enhance and promote the trans-Apennine railway is an exciting journey onboard one of their historic trains that depart from Pistoia and then travel through and discover the entire Tuscan-Emilian Apennines. Each train has a different theme, as travellers travel in vintage carriages to find the mountain landscape and be entertained by themed entertainment throughout the journey.

A widespread railway ecomuseum. Historical trains and coaches to offer sustainable tourism. During the journey, you will have the opportunity to discover the many mountain villages with their historic stations.

In addition to the train trip to Pistoia, you can also visit the Deposito Rotabili Storici: an open-air museum of historic steam engines and trains under maintenance. Among the many historical vehicles on display: the railway crane lifting a locomotive out of use, the platform in motion for a steamer's turning operations, and many models, publications, and photographs of the period.

1. Visiting the Pietrarsa Museum in Naples

And so we somehow return to our starting point: where Italy's railway history began! We have reached the end of our journey to discover the places of worship for train lovers in Italy. A trip beyond borders and boundaries. Not only in terms of landscape but also and above all in terms of history and culture.

The Pietrarsa Museum is one of Italy's most impressive museums: it takes you on a fascinating journey through time among the locomotives and trains that have united Italy from 1839 to the present day, in the 180-year history of the Italian Railways.

Today the museum is located in the ex pavilions of the Royal Mechanical, Pyrotechnic and Locomotive Works founded by Ferdinand II of Bourbon in 1840. The king wanted to emancipate his kingdom from the technical supremacy then held by the British and French. The workshops were on the first Italian railway line, the Naples-Portici line.

Pietrarsa was, therefore, the first Italian industrial centre (preceding the founding of Breda by 44 years and Fiat by 57), active until the 1970s, when the rise of electric and diesel locomotives led to the decline of steam engines and, at the same time, of the factory. In 1977, the workshops turned into a railway museum, which opened in 1989 after adaptation works.

Today, the museum is a prestigious and fascinating place, appreciated worldwide and worth visiting. It covers an area of 36,000 square metres, of which 14,000 are hidden and divided into pavilions and sectors which exhibit material of absolute value.

They include the faithful reproduction of the Bayard, the inaugural train of the first Naples-Portici railway line in 1839. Carriage 10 of the Royal Train, which Fiat built-in 1929 for the wedding of Umberto II of Savoy to Maria Josè of Belgium. Various steam, diesel and electric locomotives, models and  different railway objects, including the famous "Trecentotreni" model, 18 metres long and over 2 metres wide, which a railwayman built in more than 15 years.

The museum is on the sea, with a spectacular view of the Gulf of Naples and Vesuvius, the Sorrento Peninsula, and Capri and Ischia's islands. The museum also hosts many events and conferences, thanks to its large rooms that you can rent.

When can the Pietrarsa Museum be visited?

Mondays and Tuesdays: only for groups by appointment

Wednesday: by appointment only

Where is the Pietrarsa Museum? Via Pietrarsa snc, 80146 Napoli (NA).

For info and contacts, their phone number is 081 472003. Otherwise, you can contact them by email at museopietrarsa@fondazionefs.it. If you want to ask about events, the specific email is eventimuseo@fondazionefs.it. The Pietrarsa Museum is also on Instagram, Facebook and YouTube.