The 5 best theatres in Italy

We want to introduce you to beauty and art through the discovery of five of Italy's most famous and attractive theatres: the Teatro Massimo in Palermo, the Teatro San Carlo in Naples, the Teatro dell'Opera in Rome, the Teatro La Fenice in Venice and the Teatro La Scala in Milan. All of these theatres demonstrate how important music and art have always been in Italy.

Massimo Theater in Palermo is the largest opera house in Italy and one of the most important theatres in the world. When it opened, it was the third largest in Europe after Paris and Vienna with its 7739 square metres of area. It was inaugurated in 1897 with Giuseppe Verdi's Falstaff under the direction of Leopoldo Mugnone. Its imposing architecture is in the Greco-Roman style and is the work of architect Giovan Battista Filippo Basile and his son Ernesto, who succeeded him on his death. The entrance, through a monumental staircase, has two bronze lions on either side. At the end of the staircase, a pronaos with six Corinthian columns welcomes the spectator, with the words "Art renews peoples and reveals their life. The pleasure of the scenes is in vain where it does not aim to prepare the future". The Teatro Massimo is not only an important production centre but also a monumental work that can be visited. The visit allows you to discover the Pompeian Room and the Room of the Coats of Arms as well as the Foyer. You can admire and see that each decoration is precise and constant is the repetition of columns, windows and arches. The building is topped by an enormous hemispherical dome with a diameter of 28.73 metres. In the initial project, the hall, including the boxes and gallery, could hold up to 3,000 spectators, later to become 1,247 according to the regulations that followed. The hall is shaped like a horseshoe and has perfect acoustics. A special feature is the movable ceiling made of frescoed wooden panels, which, with an adjustable upward opening, allows ventilation of the hall. The 'Symbolic Wheel' depicting the Triumph of Music was created by Luigi Di Giovanni to a design by Rocco Lentini. 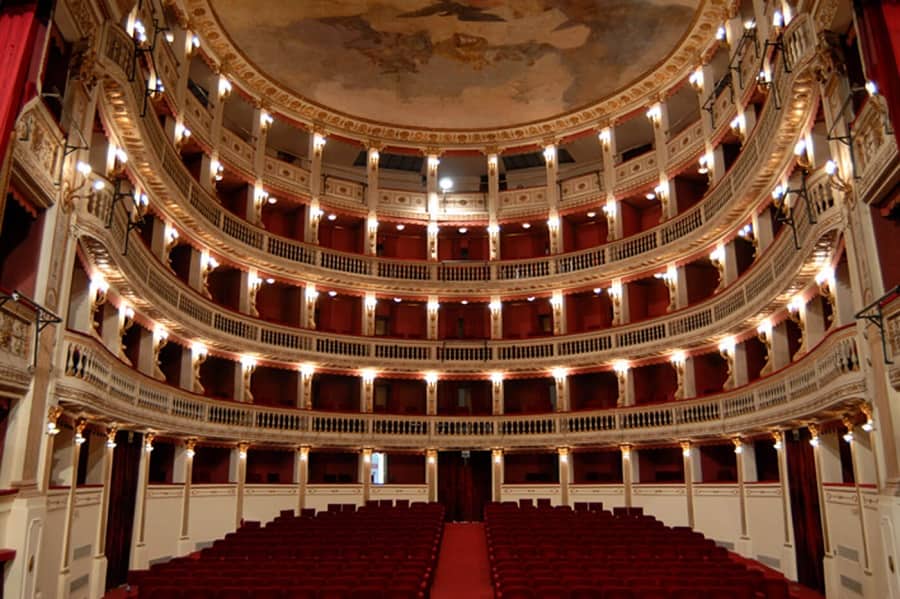 San Carlo Theater in Naples was founded in 1737 and is therefore the oldest opera house in the world. It stands next to Piazza del Plebiscito, the beating heart of the Neapolitan city. King Charles III of Bourbon ordered its construction and it was inaugurated in 1737. Work on this majestic theatre was entrusted to the architect Giovanni Antonio Medrano. In 1809 the architect Antonio Niccolini took care of its renovation, first of all changing the façade into a neoclassical style and giving the theatre the typical connotations of a temple. In 1816 a fire destroyed the theatre, leaving only the perimeter walls intact. In just nine months, Antonio Niccolini rebuilt the theatre, which remained faithful to the previous design with its horseshoe-shaped layout, five tiers of boxes and a gallery, as well as a large royal box. In the centre of the ceiling is the painting of Apollo presenting the world's greatest poets to Minerva, painted by the Cammarano brothers. The greatest musicians and conductors have performed in this grand theatre, which has also hosted many ballets. In 1812, Italy's oldest ballet school was founded at San Carlo. After the Second World War, the San Carlo Theatre was the first theatre in Italy to reopen, once again holding a record. The San Carlo Theatre has also been included by Unesco in the list of World Heritage monuments.

Opera Theatre in Rome is perhaps the theatre that has undergone the greatest modernisation in the 20th century, especially in its façade. It was Domenico Costanzi who wanted this theatre and in fact the theatre bore his name until it was purchased by the Governor of Rome. Costanzi entrusted the work to the architect Achille Sfondrini, who built it between 1874 and 1880 in neo-Renaissance style, paying great attention to acoustics. It was inaugurated on 27 November 1980 with Rossini's opera Semiramide. Originally the theatre had three tiers of boxes, an amphitheatre and a gallery, all surmounted by a dome frescoed by Annibale Brugnoli. In 1926 the Municipality of Rome bought it and renovation work was entrusted to the architect Marcello Piacentini, who increased the three tiers of boxes by one and installed an extraordinary crystal chandelier, the largest in Europe. When the Republic came into power, Piacentini was again entrusted with the restoration of the facade, in particular, in a 20th century style. Over the years, the Opera House has acquired international prestige with the succession of world-famous performers such as Caruso, Gigli, Maria Callas, Domingo and Pavarotti. Today the Rome Opera House has a capacity of 1650 seats.

La Fenice Theatre is in Venice and has literally risen from the ashes several times. It was first inaugurated on 16 May 1972 on the occasion of the Festa della Sensa. La Fenice is one of the most famous theatres in the world because it has been and still is the seat of premieres of artists such as Rossini, Bellini, Verdi, Stravinsky, Kagel, Guarnieri, Perocco. As mentioned above, this theatre has suffered two disastrous fires, but on both occasions it was rebuilt more beautiful than before. The theatre was designed by Gian Antonio Selva, but after the fire of 1836 the architects Tommaso and Gian Battista Meduna restored it, adapting the original project. La Fenice suffered another disastrous fire in 1996, but once again it was rebuilt as it was and in 2003 it was inaugurated for the third time live on television in the presence of the President of the Republic and conducted by Maestro Riccardo Muti. The neoclassical façade features a pronaos with four Corinthian columns at the top of which is a balustrade. In the niches are sculpted the Dance and Music and in the centre the Phoenix. The theatre hall with a capacity of 1500 spectators is decorated with stucco, paintings and gold carvings. Inside the theatre there is a permanent exhibition dedicated to Maria Callas and the years she lived in Venice. 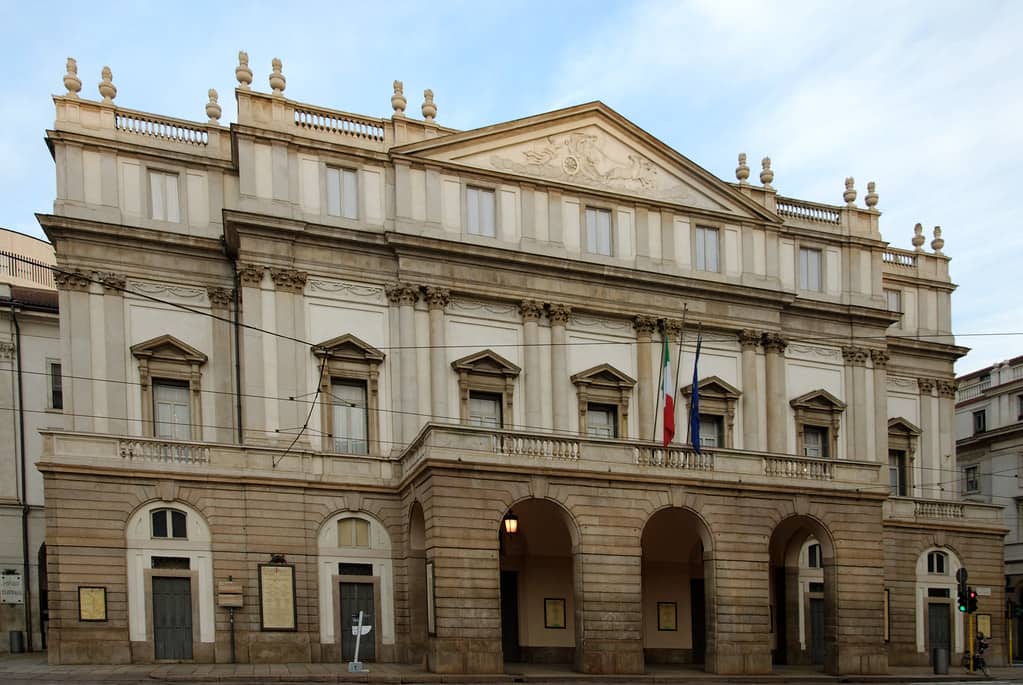 Alla Scala Theatre  Milan is one of the largest and most prestigious in Italy. It was inaugurated on 3 August 1778 with the opera "L'Europa" by Antonio Salieri. It was built at the behest of Empress Maria Theresa of Austria by the neoclassical architect Giuseppe Piermarini on the ruins of the Ducal Theatre and the Church of Santa Maria alla Scala, demolished for the construction of the theatre. The hall is shaped like a horseshoe and embellished with neoclassical decorations. To ensure better acoustics, a wooden vault was chosen, almost like a natural sounding board. Above the proscenium is a clock indicating the hours and minutes supported by two female figures in bas-relief. Since 1812, with Rossini and many other prestigious names to follow, the Alla Scala theatre has become the home of melodrama and then also of ballet. On 16 August 1943 a bombing raid hit Milan, destroying the roof, the vault and other areas of the theatre. Reconstruction immediately followed, including the installation of a copy of the majestic 19th-century chandelier that was destroyed, which hangs from the vault and has 383 light bulbs. Today the dominant colours are gold and ivory. A complex system of staircases with several flights, known as "pincer staircases", connects the foyer with the corridors leading to the boxes. In 2000, Piermarini's original design was extended by Swiss architect Mario Botta and today has 6 levels of boxes and galleries with 2030 spectators. He also added a larger stage tower and engineer Franco Malgrande built a stage machine capable of bringing the scenes up to 4 metres above the normal stage level. Since 1951, at the behest of the then artistic director Victor de Sabata, La Scala's opening day has coincided with 7 December, St Ambrogio, the patron saint of Milan.