In 2021, the site Padua’s fourteenth-century fresco cycles, located within the city walls of Padua in north-eastern Italy, was inscribed on the UNESCO World Heritage List, becoming the 57th Italian site on the list. The Padua Urbs Picta Nomination Committee was formally formed in 2016, although collaboration between the partners had already been underway for some years.

The site is made up of eight religious buildings and monumental complexes which house a selection of fresco cycles painted between 1302 and 1397 by different artists. Although they were painted by different artists and in different buildings with different functions, the 14th-century frescoes maintain a unity of style and content, the model for which is Giotto's work in the Scrovegni Chapel. These frescoes illustrate a completely new way of representing narrative in painting. Let's discover all the eight buildings of the site together. 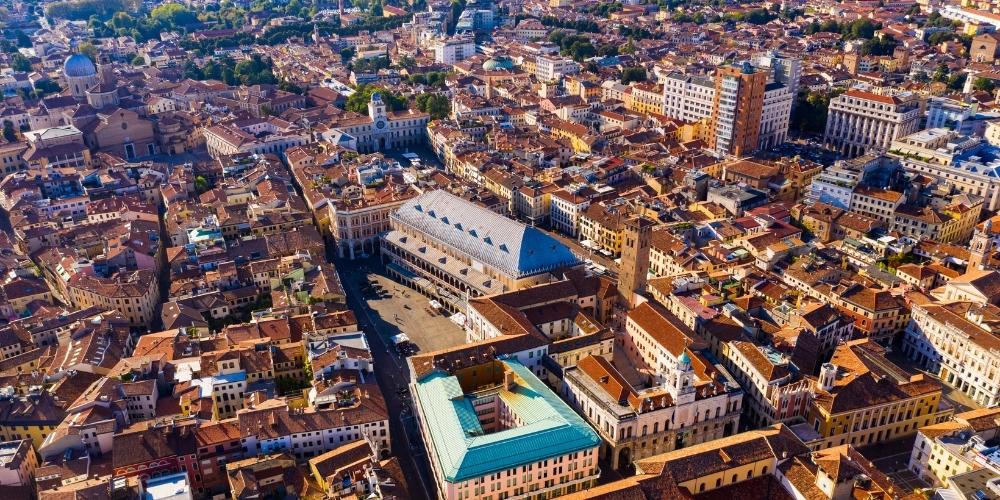 The fresco cycles are housed in eight building complexes in the historic centre of Padua, a city in the Veneto region located 20 km west from the Venice lagoon. These marvellous frescoes illustrate how, during the 14th century, various artists, starting with Giotto, introduced important stylistic developments in the history of art. The eight building complexes are grouped into four component parts: Scrovegni and Eremitani (part 1); Palazzo della Ragione, Carraresi Palace, Baptistery and associated Piazzas (part 2); Complex of Buildings associated with the Basilica of St. Anthony (part 3); and San Michele (part 4).

The artists who played a leading role in the creation of the fresco cycles were Giotto, Guariento di Arpo, Giusto de’ Menabuoi, Altichiero da Zevio, Jacopo Avanzi and Jacopo da Verona. Working for illustrious local families, the clergy, the city commune or the Carraresi family, they would produce fresco cycles, within buildings both public and private, religious and secular, that gave birth to a new image of the city. 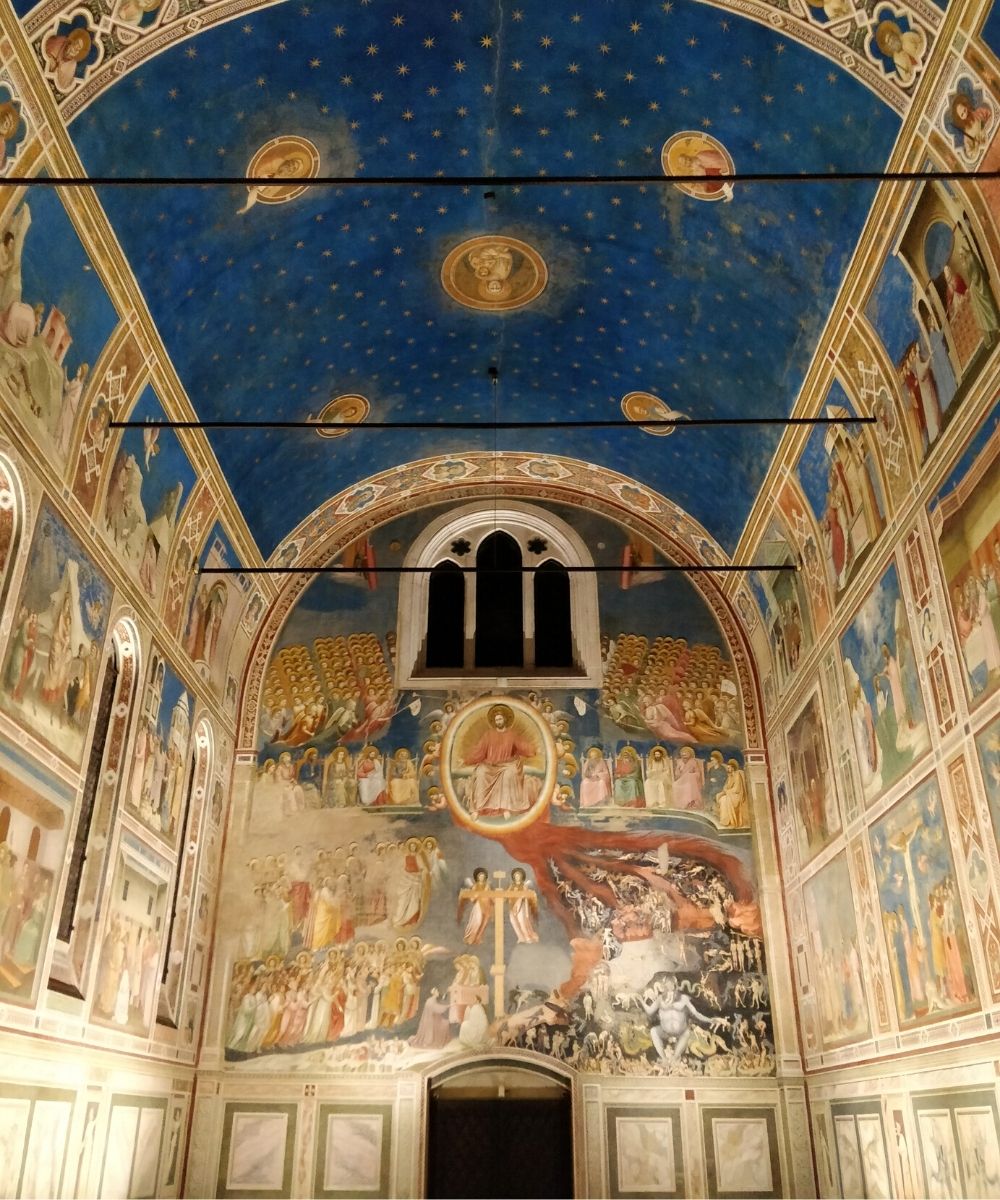 The Scrovegni Chapel houses Giotto's famous cycle of frescoes from the early 14th century, considered one of the masterpieces of Western art. The chapel is entirely frescoed on all four of its walls. The majestic "Last Judgement", which occupies the entire counter-façade, and the vault with Giotto's starry blue sky are known all over the world. Giotto's frescoes started a pictorial revolution because they contrasted the then dominant Byzantine current with more realistic, human and natural forms. The cycle depicts the first kiss in Italian art.

Not far from the Chapel is the Church of the Eremitani, a medieval Catholic place of worship. The main chapel is decorated with a cycle of frescoes by Guariento, clearly influenced by Giotto's not so distant frescoes. 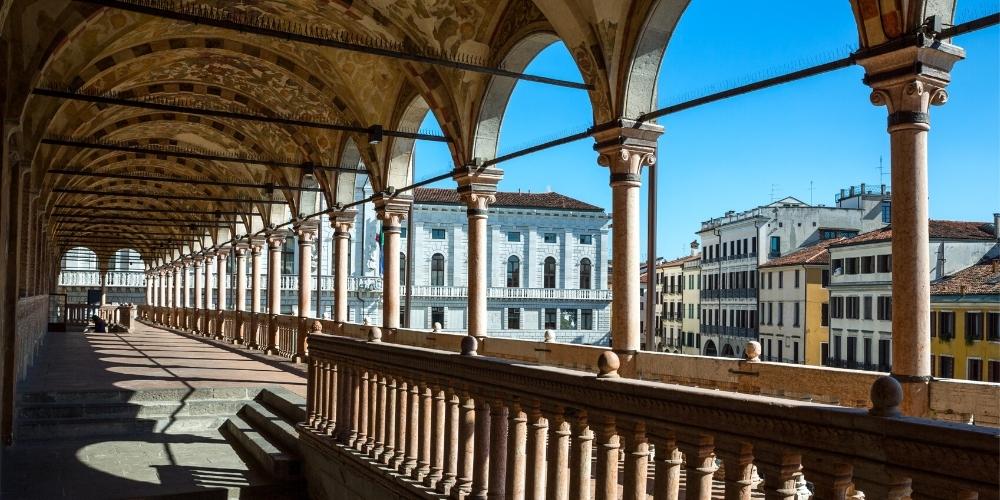 The imposing Palazzo della Ragione was the former seat of the city courts and the covered market of Padua. Inside its Hall there is a cycle of frescoes originally painted by Giotto and redone after the fire of 1420. The Loggia dei Carraresi, on the other hand, is the last surviving part of the Reggia Carrarese, the residence of the lords of Padua. Inside there are some frescoes by Guariento depicting biblical episodes. Inside the cathedral baptistery we find one of the most important fresco cycles of the 14th century, a masterpiece by Giusto de Menabuoi.

Basilica of St. Anthony and the Oratory of San Giorgio 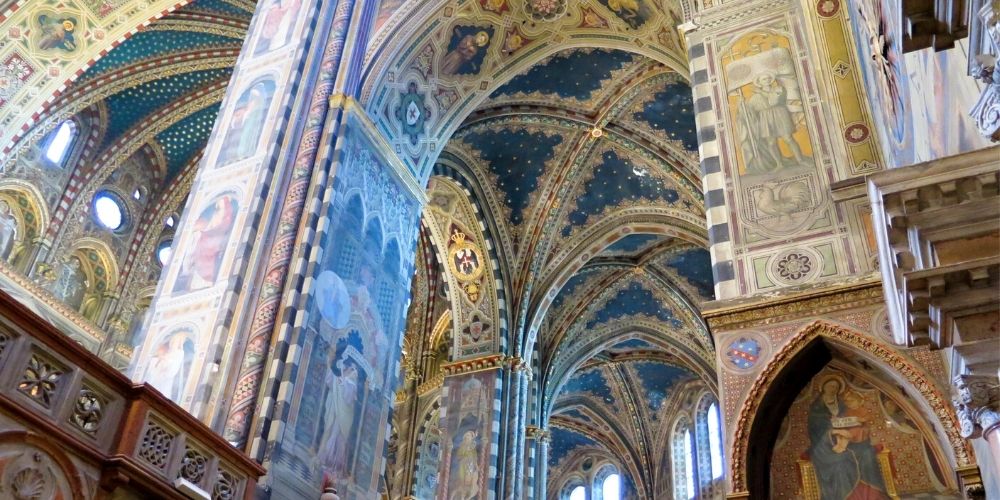 The Basilica of St. Anthony, known simply as il Santo, is one of the largest churches in the world and is visited annually by over 6.5 million pilgrims, making it one of the most venerated shrines in the Christian world. It houses the relics of St. Anthony of Padua and his tomb, as well as several cycles of frescoes, works by Giotto, Altichiero da Zevio, Jacopo Avanzi and Jacopo da Verona. Adjacent to the Basilica there is the Oratory of San Giorgio, built as a family burial chapel, and completely frescoed by Altichiero da Zevio.

The Oratory of San Michele

The Oratory of San Michele houses a chapel, the Bovi Chapel, completely frescoed by Jacopo da Verona, whose pictorial cycle revolves around the life of the Virgin. Dating back to 1397, this cycle of frescoes is the last example of fresco painting in 14th-century Padua.

Scrovegni Chapel from outside

In 2021, the site Padua’s fourteenth-century fresco cycles, located in north-eastern Italy, was inscribed on the UNESCO’s World Heritage List under the category cultural properties, becoming the 57th Italian site on the list.

The inclusion on the Unesco list is motivated by one criterion: (ii) the Padua fresco cycles illustrate the important interchange of ideas which existed between leading figures in the worlds of science, literature and the visual arts in the pre-humanist climate of Padua in the early 14th century. New exchanges of ideas also occurred between clients commissioning works and the artists from other Italian cities that had been called to Padua to collaborate on the various fresco cycles inspired by scientific and astrological allegories or ideas on sacred history gleaned from contemporary intellectuals and scholars. The artists showed great skill in giving these ideas visual form and their technical abilities allowed the Padua fresco cycles not only to become a model for others but also to prove remarkably resistant to the passage of time. The group of artists striving for innovation who gathered within Padua at the same time fostered an exchange of ideas and know-how which led to a new style in fresco illustration. This new fresco style not only influenced Padua throughout the 14th century but formed the inspirational basis for centuries of fresco work in the Italian Renaissance and beyond. With this veritable rebirth of a pictorial technique, Padua supplied a new way of both seeing and depicting the world, heralding the advent of Renaissance perspective. The innovations mark a new era in the history of art, producing an irreversible change in direction.