Padova, the best places to visit in a short break

Padua is full of places to visit, famous for the "Saint without a name", the "Meadow without grass" and the "Café without doors"

In the Veneto plain, about 45 minutes by car from Venice and an hour from Verona, Padova (Padua) is a lively city, rich in cultural attractions and art, with many places to visit and many curiosities to know. Still, even in a short break, you will discover a reality that will make you want to return. Different historical eras and famous artists have given it a beauty revealed by a slow walk, all condensed into a historic centre large enough to offer even the most demanding but small enough to be visited on foot.

Padova is a true jewel that you can discover step by step, rain or shine, walking under the shelter of its porticoes between the romantic atmosphere of the historic buildings and the vitality of the squares. It also offers an infinity of magical views to those curious enough to seek Beauty in the details that only the most attentive can grasp.

... for the great desire I had to see fair Padua, nursery of arts, I am arrived (...) and am to Padua come, as he that leaves a shallow plash to plunge him in the deep, and with satiety seeks to quench his thirst.

Padua, the city of the Three Without 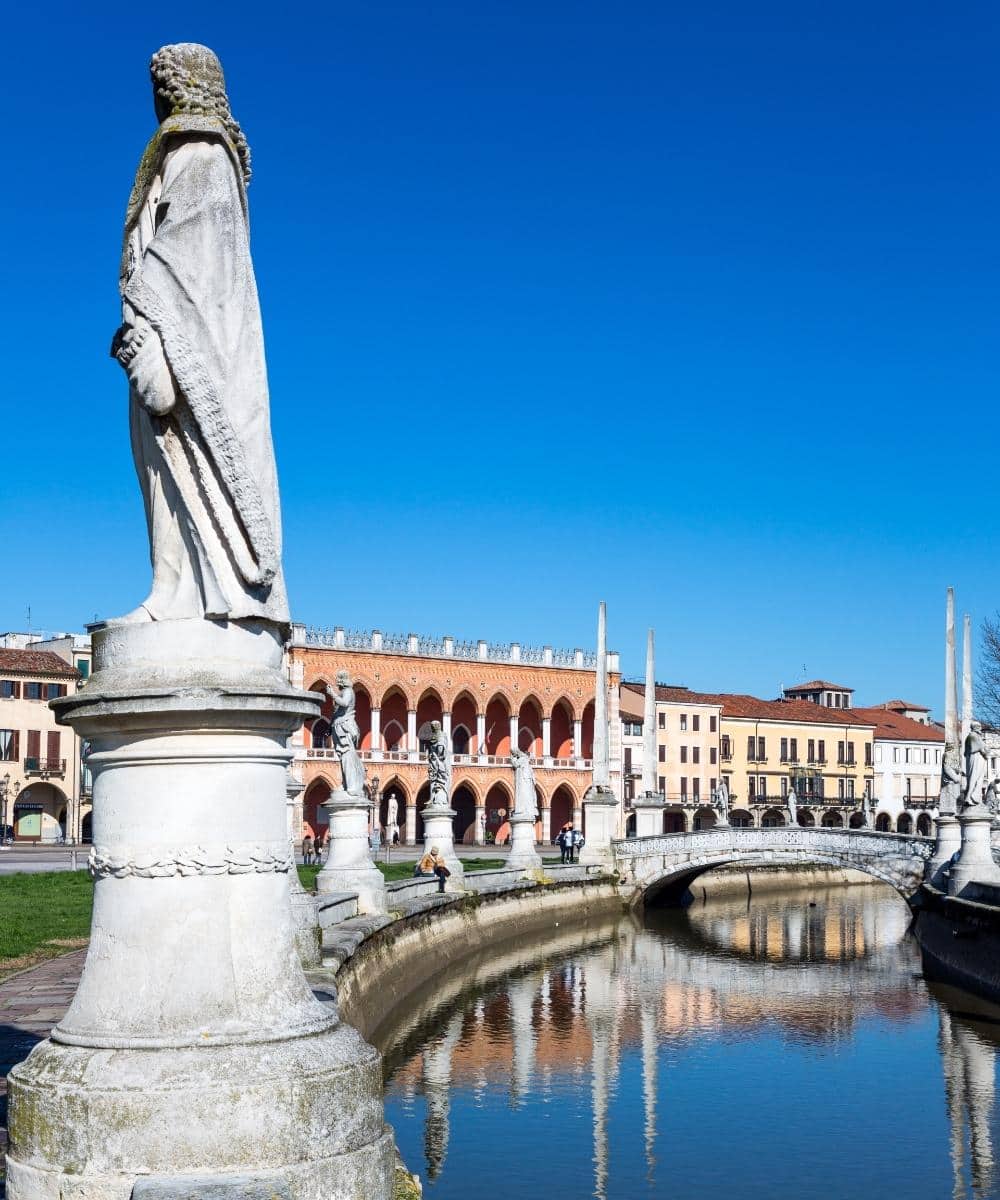 Padova is named for its "Saint without name", for its "Lawn without grass" and for its "Café without doors": they are, respectively, Sant'Antonio, Prato della Valle and Caffè Pedrocchi, three places you cannot miss during a visit to the city.

The domes of the Saint - Saint Anthony is known simply as 'The Saint' - rise above the surrounding buildings and, if you have the chance to admire Padova from above, it will be easy to recognize them. The basilica was built between 1232 and the mid of the fourteenth century and is a pilgrimage destination for worshippers worldwide.

Prato della Valle is the second largest square in Europe and not far away from this building. It is undoubtedly one of the fascinating places in the city. It is beautiful at all times, from when the mist of dawn creeps in among the monuments to when artificial lights illuminate it in the dark of evening. It has an elliptical shape with a central island surrounded by a canal and 78 statues representing the most famous sons of the city, who were Paduan by birth or adoption: statue number 44 depicts Andrea Memmo, its creator.

Another symbol of Padova is certainly the Caffè Pedrocchi, an imposing neoclassical building called "without doors" because, since its inauguration in 1831 to 1916, it remained open day and night as a "place where ideas were born" and a meeting point for intellectuals, students and political figures. 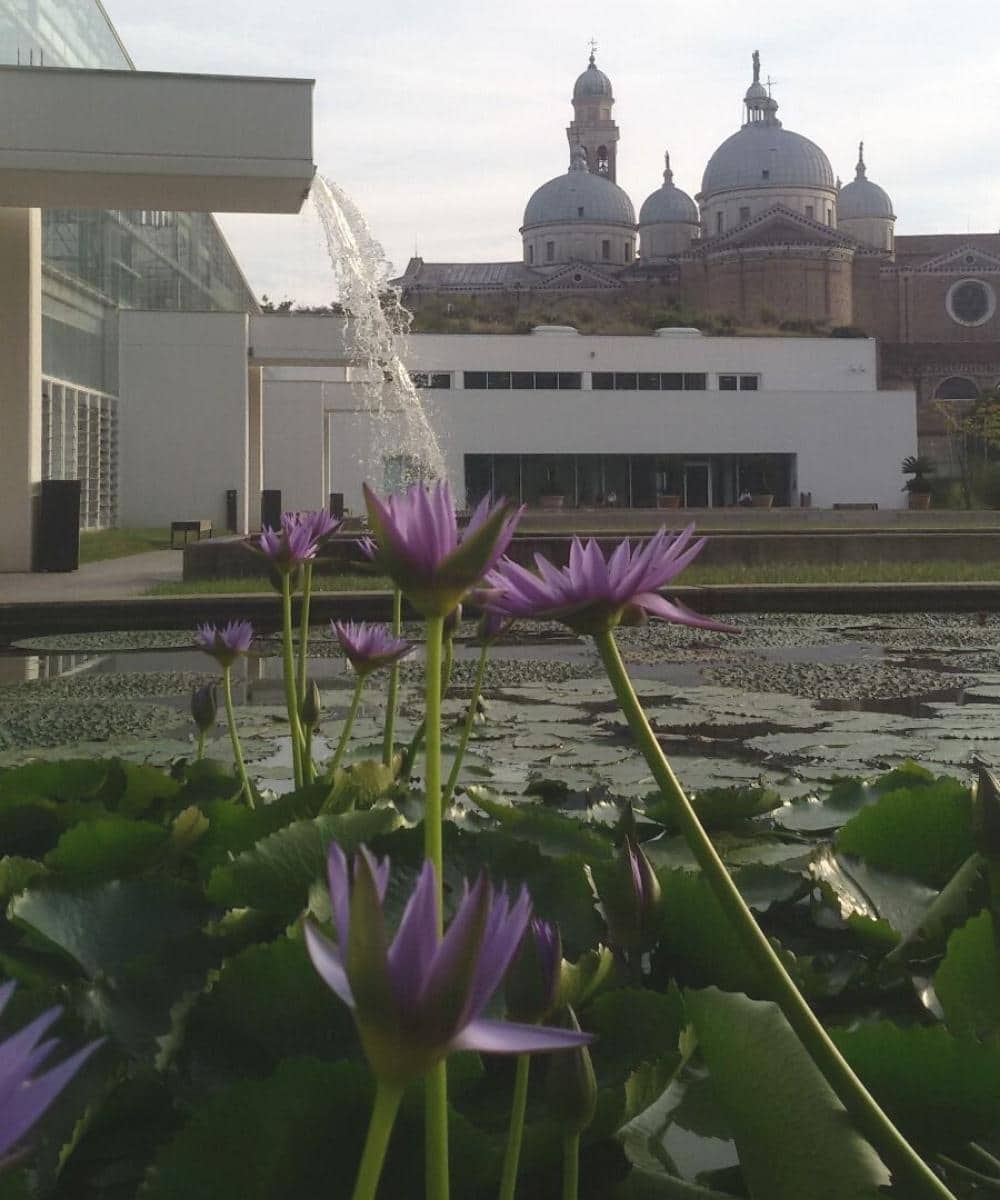 The Botanical Garden of the University of Padua, established in 1545, is the oldest in the western world that has survived to the present day, maintaining its original shape and location. Its value in history is enormous for its contribution to progress in botany and medicine (thanks to the production of "simples," i.e. medications that came from nature). Still, it is also a beautiful example of garden architecture according to the aesthetic canons of the Renaissance. From a place intended only for the cultivation of medicinal plants, today it is proposed as a "site for the conservation of biodiversity" and houses about 6,000 specimens with 3,500 botanical species, a true hymn to the imagination of Mother Nature.

Palazzo Bo, Headquarters of the University 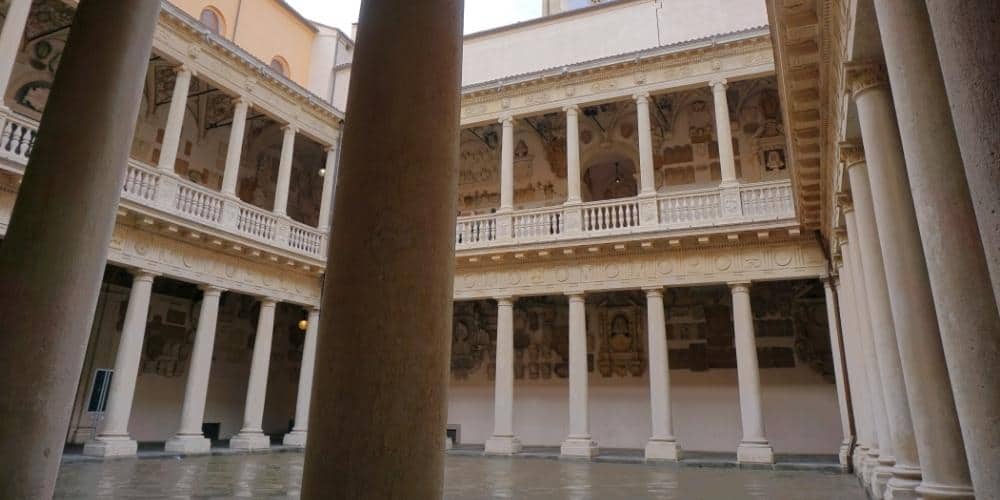 Since 1500 Palazzo Bo has been the seat of the historic University of Padova, founded in 1222 and born in the name of freedom of thought and opinion with the motto "Universa Universis Patavina Libertas" (all, for all, freedom in the University of Padova). It is the second oldest university in Italy after Bologna. Its long history has hosted many illustrious figures, including Galileo Galilei, who taught here for 18 years and whose chair is preserved in the Sala dei Quaranta. Among the most important rooms of Palazzo Bo are the Anatomical Theatre and the Aula Magna.

Antenor, having escaped from the Achaeans, was able to penetrate the Illyrian gulfs, to push without danger into the kingdoms of the Liburnians, beyond the sources of the Timavo... Here he founded the city of Padua and established a Trojan colony, giving his name to the people; here he hung up the weapons of Ilium, here he now rests composed in placid tranquillity. 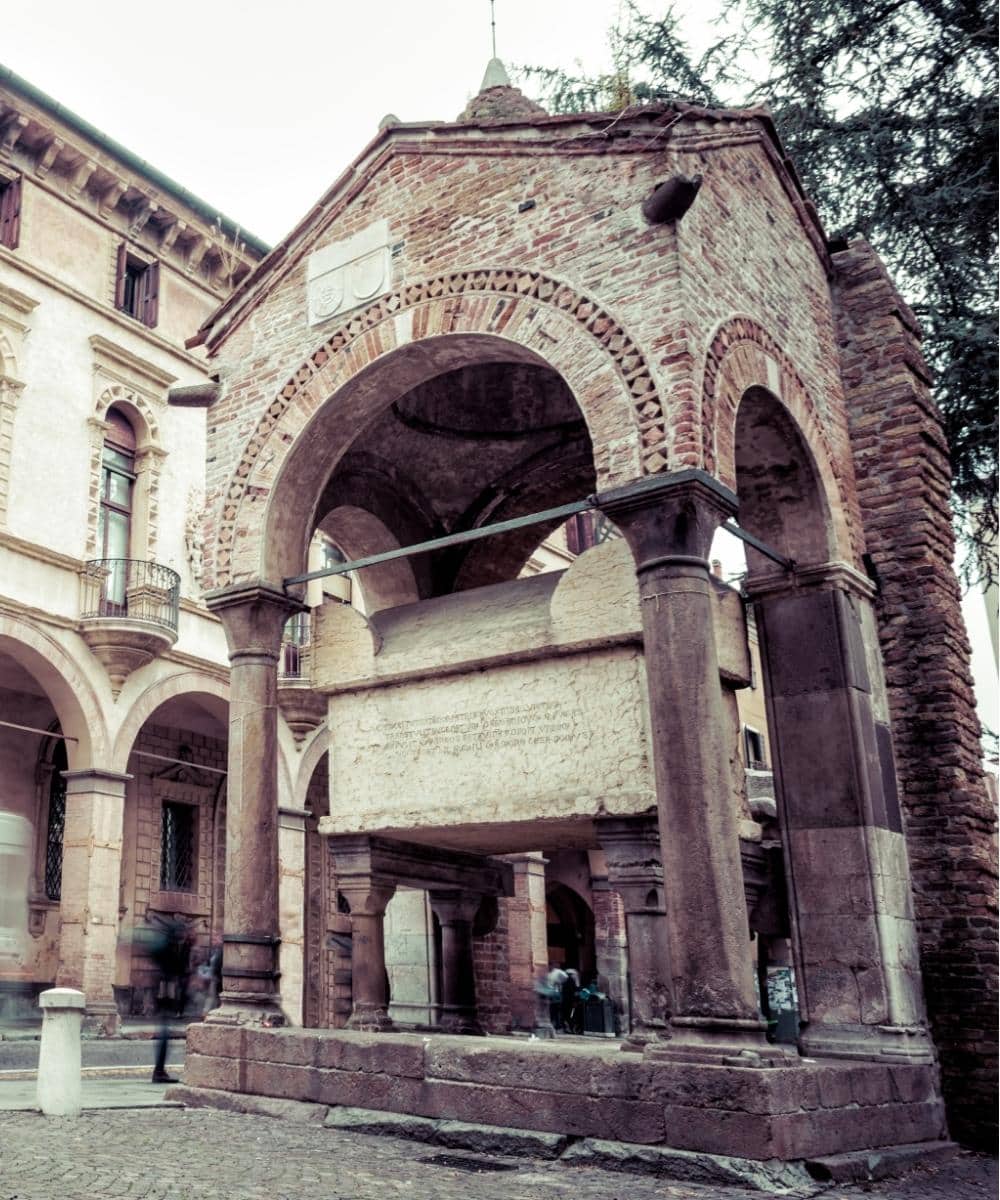 Not far from Palazzo Bo, there is a particular funerary monument to which the people of Padova are very attached. In 1274, during the construction of a building, a marble ark containing a double coffin came to light. The engravings on the epigraph indicated it as where the remains of the city's mythical founder, mentioned by Virgil in the Aeneid, lay. So the sarcophagus was placed inside a medieval shrine. Although recent studies have ruled out the possibility that the skeleton belonged to a man who lived during the Trojan War, it is still Tomba di Antenore ('Antenor's tomb') for Paduans.

The squares of Padova and Palazzo della Ragione 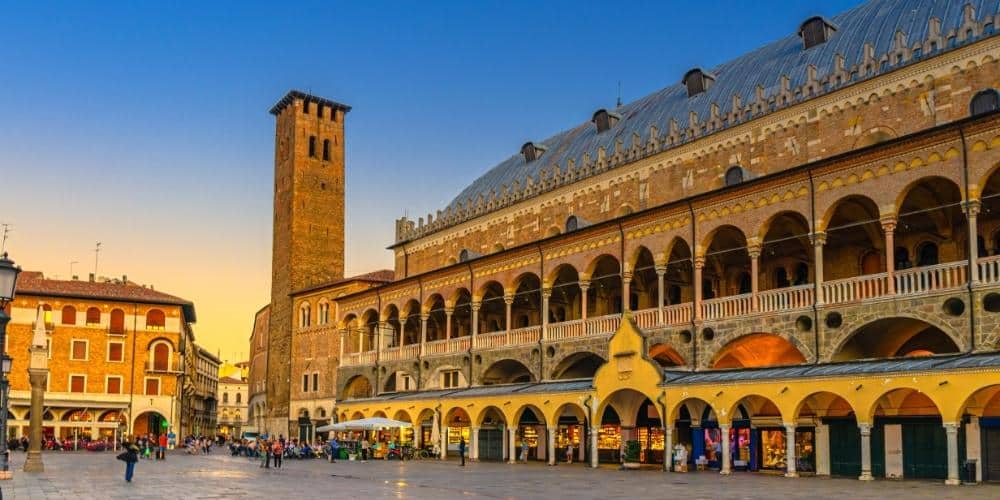 The squares have always been full of life, with the comings and goings of people among the market stalls and those who meet with friends to have a drink enjoying the must-have Spritz, a staple that the Paduans cannot give up. Between Piazza della Frutta and Piazza delle Erbe is Palazzo della Ragione, known as "Il Salone", an architectural endeavour that had no equal at the time. It is 82 meters long and 27 meters wide, and its roof has a particular shape of an overturned ship hull. Its first construction dates to 1219, and in ancient times it was the seat of the city courts; the room features a cycle of medieval frescoes and the almost six-meter-high wooden horse, given to the city by one of the nobles of the time, certainly catches the eye. Today the Salone is used for exhibitions and events, but "man does not live by culture alone": the old food shops on the ground floor delight customers with local products and gastronomic innovations to carry on the traditions of good local food.

Nearby, Piazza dei Signori, also known as Piazza della Signoria, is the ancient centre of power in Padova. On summer evenings, it turns into an elegant outdoor lounge, where Paduans and tourists meet to chat, sitting at the tables of the bars, ignoring the passing of time. The tower of Palazzo del Capitanio, on the other hand, has been counting time for centuries, with its astronomical clock marking not only hours and minutes but also months, days, moon phases and even astrological placements. This chapel, located along the road leading from the centre of Padua to the station, is one of Giotto's greatest masterpieces. The artist frescoed it between 1303 and 1305 on behalf of Enrico degli Scrovegni, a member of one of the city's most powerful families. His father was a notorious usurer of the time, so the chapel's construction was to expiate the pains of a life lived in sin; it seems that his son Enrico also wanted to 'save himself' by being portrayed among the ranks of the saved. The frescoes cover the entire wall with the events of the Virgin and Christ, up to the majestic Last Judgement, which concludes the story of man's salvation.

In 2021 UNESCO added the Scrovegni Chapel to the World Heritage list, along with other sites within the walls of Padua that host a selection of fresco cycles from the 14th century painted by various artists. Among them, Giotto's masterpiece is considered the beginning of a revolution in the history of mural painting. The site "Padova Urbs Picta - Giotto's Scrovegni Chapel and Padua's fourteenth-century fresco cycles" includes, in addition to Giotto's Chapel and the nearby Church of the Eremitani, the Baptistery of the Cathedral, the Chapel of the Reggia Carrarese, the Basilica and Convent of Sant'Antonio, the Oratory of San Giorgio, the Oratory of San Michele and Palazzo della Ragione. 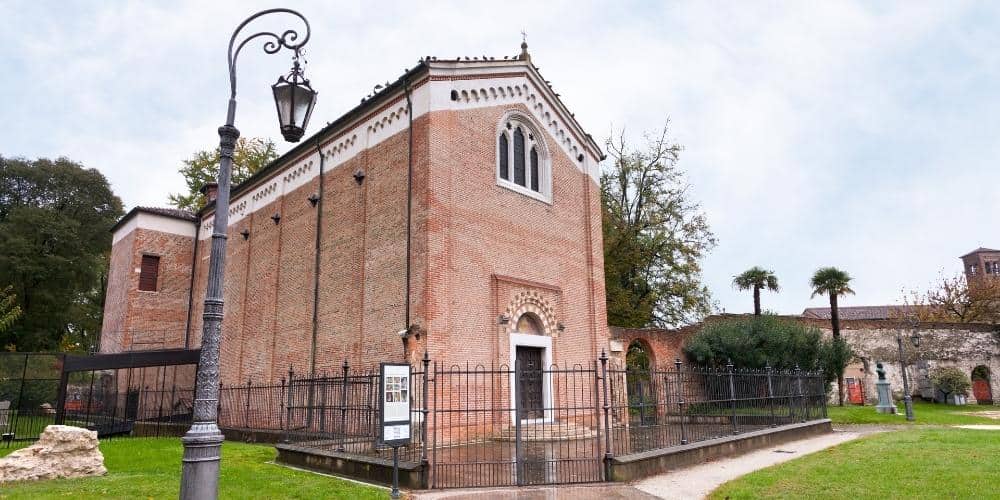 Padova is rich in palaces that house collections, museums and exhibitions. Museo Eremitani is the oldest museum complex in the Veneto region. It includes the Museo Archeologico (Archaeological Museum) and the Museo di Arte Medioevale e Moderna (Museum of Medioeval and Modern Art ). They are both located in the cloisters of the former convent of the Eremitani monks, and the Scrovegni Chapel and Palazzo Zuckermann are also part of the complex. The former hosts important collections of archaeological finds from the Paleovenetian, pre-Roman and Roman periods and a fascinating Egyptian section. The second is home to a rich art gallery displaying works by the great masters of Italian painting between the 14th and 19th centuries. Some multimedia stations offer visitors an exciting and realistic experience. Here, you can consult ancient drawings and documents dating back to the dawn of Italian archaeology and learn about the artistic and historical context in which Giotto worked during the Chapel's creation. The Photographic Cabinet is also attractive and well-stocked. Palazzo Zuckermann is nearby the other buildings. On the ground and first floors, it houses the Museo di Arti Applicate (Museum of Applied Arts) and, on the second floor, the Museo Bottacin, which contains a beautiful private collection of art and coins.

Padova, the City of Porticoes 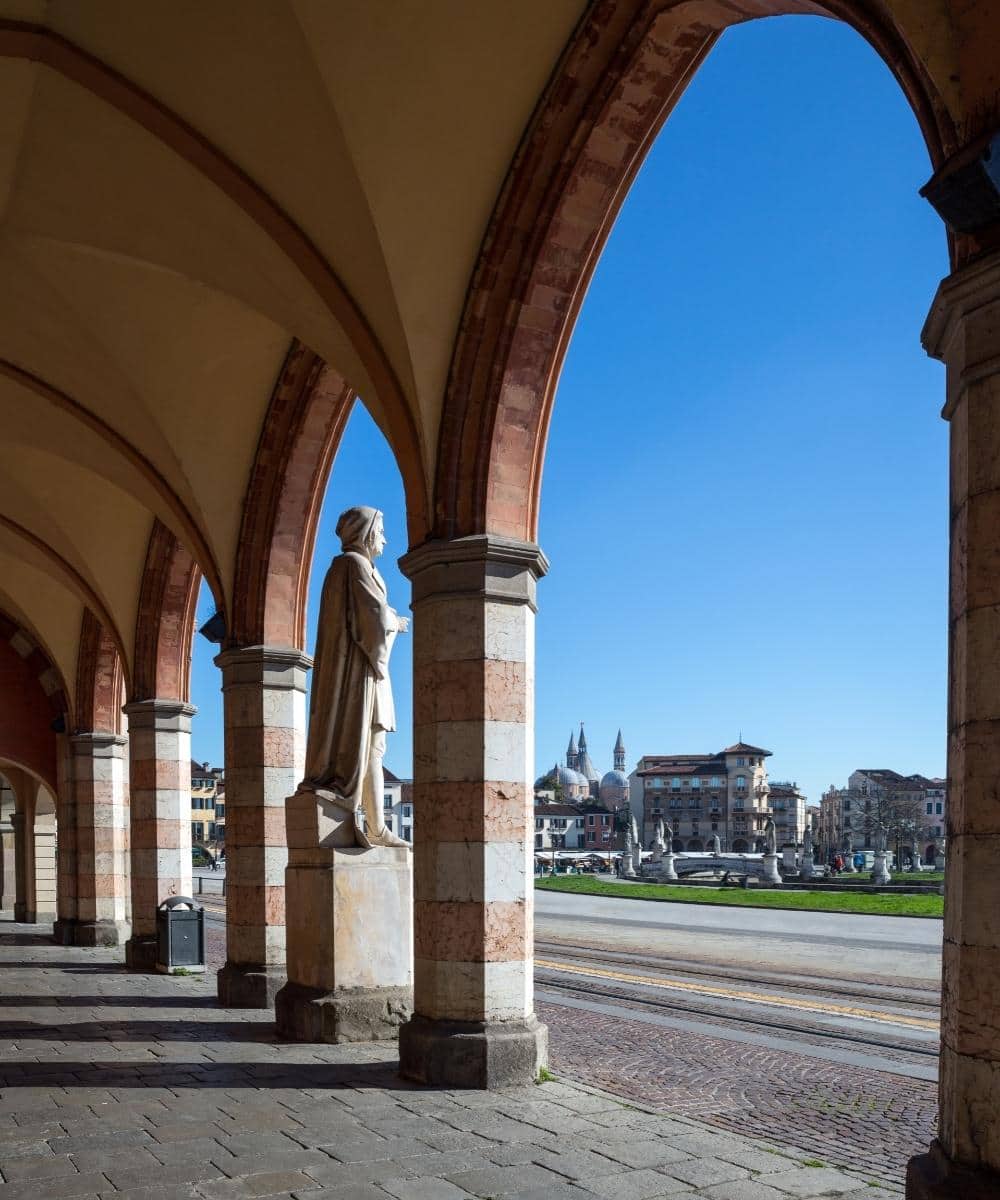 We have come a long way in the shadow of Padova's Porticoes, and they are the city's first attraction. They stretch for 25 kilometres throughout the historic centre, second only to Bologna, a UNESCO World Heritage Site. Padova's Porticoes have unique features that set them apart from those of any city in Europe, such as paintings, stone memorials, votive frescoes and inscriptions. Unfortunately, many of the decorations have been lost over the centuries. Still, all this artistic fervour gives us an idea of how Padova has always been a colourful city. Among the memories in stone, the famous Canzone della Nave (Song of the Ship) engraved on the plaque on the portico of Palazzo Giusti in Via San Francesco has come down to us.

in mezzo a tanti mali,

(Ship, you carry a cargo of unmerited faith, people who hope and believe in the sun of freedom.

You go towards victory loaded with chains you sail among the pains towards freedom.

The new Europe rises amid so many evils and a people of equals is born to freedom.)

We can say that Padova is a colourful, lively city, which cannot help but talk about itself to those who visit it and know how to interpret it, where everyone can discover a lot of beauty, one step after another.