Christmas is all about magic. What better way to spend it than visiting a beautiful Italian city? Here are our top 10 choices for an unforgettable Christmas!

The Christmas destinations not to be missed Chosen by Visit Italy

Christmas's colours, scents, and melodies invade Italy's big cities and towns. From North to South, our country looks enchanting during the Christmas holidays. Try to choose where to spend these days by reading our article. Spoiler alert: one city won't be enough!

10. Aosta and the Alpine landscape 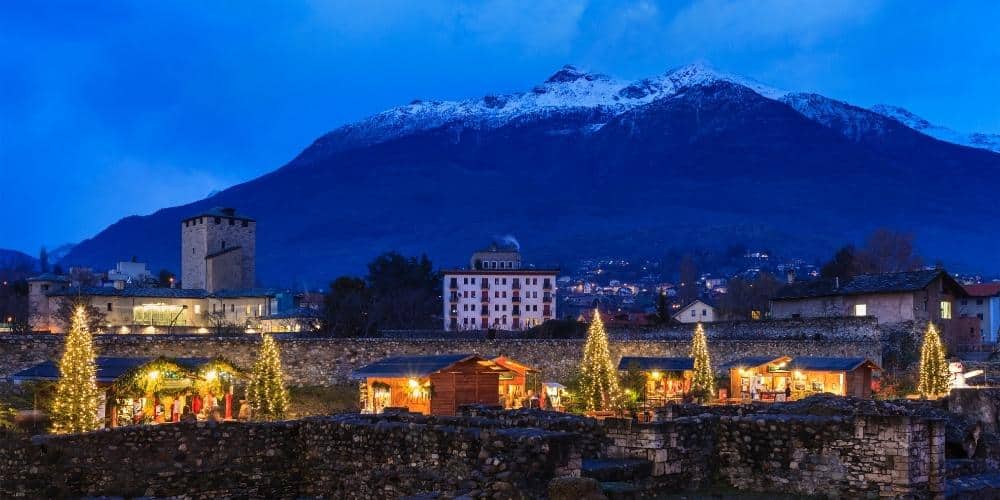 The capital city of the Val d'Aosta region is an almost fairytale-like place. Stretching over a vast plain surrounded by majestic mountains, the city has over 34,000 inhabitants and boasts very ancient history. Breathtaking scenery surrounds its medieval castles and Roman remains.

At Christmas time, Aosta turns white and takes on a unique charm. You cannot miss the famous Marché Vert Noel, a typical Alpine Christmas market set up in the heart of the town, behind the suggestive Roman Theatre. The typical mountain chalets, ice skating rinks and carousels in the squares enrich the city with joy, immersing tourists in the perfect Christmas atmosphere. Moreover, local initiatives, musical events, and traditional dance performances cheerfully overwhelm tourists.

9. Taste and tradition in Turin

Turin offers numerous initiatives during the Advent season. Here are some of them. Gluttons should visit the Agri Christmas market. It is a Christmas showcase of local food and wine production, presenting a selection of the best products from Turin and the surrounding area. The initiative, undertaken with the collaboration of the Chamber of Commerce, provides for the exhibition and sale of numerous excellent local products, including Piedmontese PDO cheeses, Vermouth of Turin, precious Piedmontese wines, chocolate, coffee and much more.

If you're in town, then, it's worth visiting the nearby Venaria Reale and enjoying a magnificent light show. In the Torre dell'Orologio square, over the backdrop of the majestic Royal Palace (a Unesco heritage site), you will find the traditional luminous deer, now a symbol of Christmas in Turin, accompanied by a series of animated projections that will spark your imagination.

Finally, it is worth visiting il Presepe del Re (the King's Crib) exhibited in the Sant'Umberto Chapel: the sculptures are hand-carved in wood, have eyes made of glass and are dressed in precious silk and velvet costumes, embellished with gold and silver threads.

8. Scents and wishes in Brunico

In Val Pusteria (Trentino Alto Adige), there is the pretty village of Brunico, where you can feel the Christmas atmosphere everywhere. The market set up in the town is dotted with stalls full of typical food products and precious handicrafts. Together with Brixen, Sterzing, Merano and Bozen, the Bruneck Christmas market is one of the so-called Five Original Trentino South Tyrol Markets. All of them boast the Green Event certificate (since 2014). In every alley of Brunico, you can hear the sounds, see the colours and smell the scents of Advent.

Among the most significant initiatives offered by the village, we would like to point out the Fienile dei Profumi, an olfactory sensory journey, and the Silent Point. The latter, set up in the Sternbach Palace, is intended to underline the importance of allowing ourselves a moment of recollection, especially during the festive period. There is a Christmas tree in the middle of the palace room where all visitors can hang a wish written on paper.

7. Cesenatico and the maritime Nativity scene 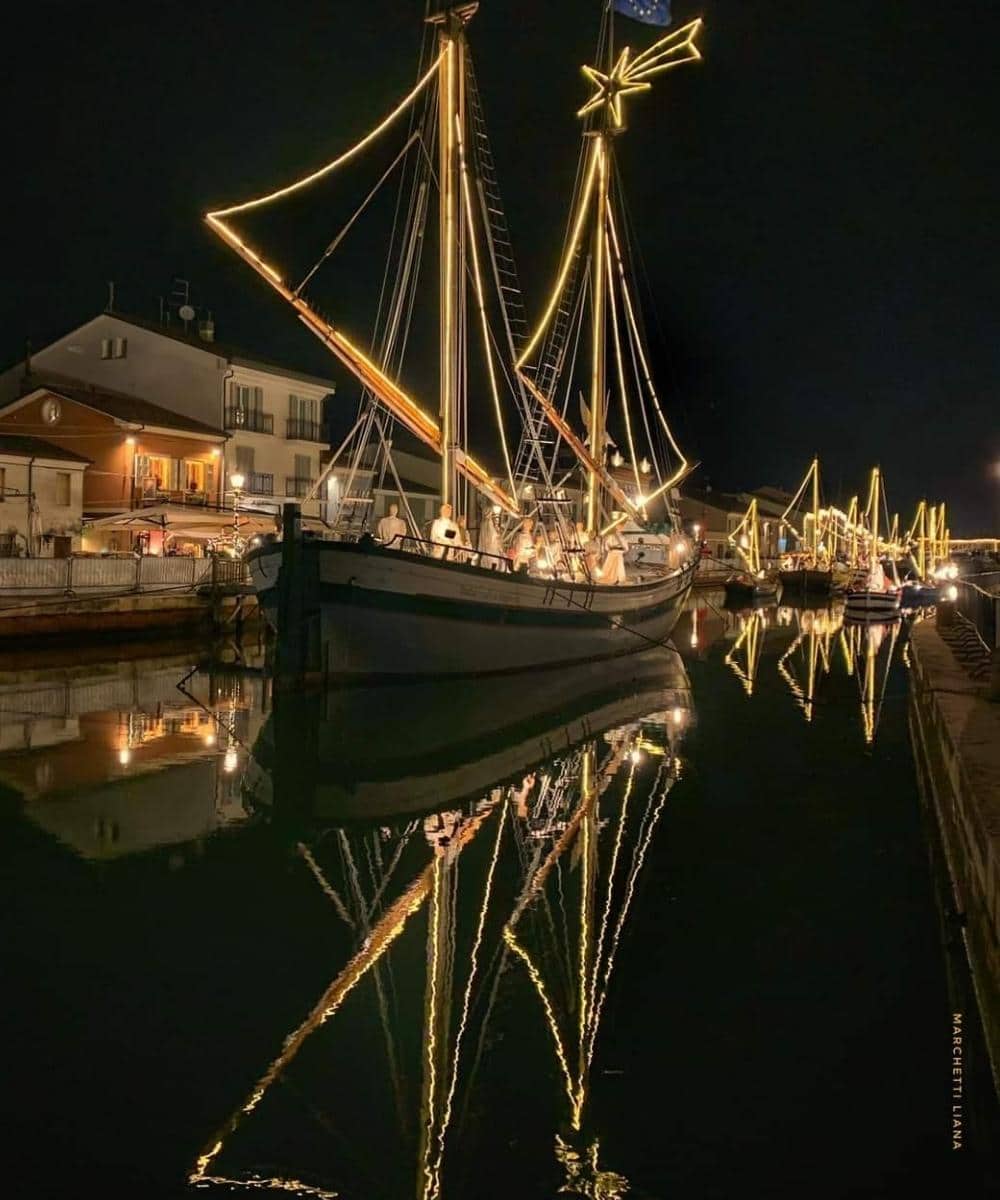 In Cesenatico, Christmas is on the sea. The well-known seaside resort and tourist destination on the Romagna Riviera in the province of Forlì-Cesena keeps a curious and evocative Christmas tradition: the floating nativity scene at the Maritime Museum. There is no ox or donkey, no hut or cave, and neither snowy peaks. In Cesenatico, Jesus is born on the sea, among dolphins and boats, cradled by the sea's waves. The Nativity in the seaside village is staged on the ancient ships of the Museum, in the romantic setting of the Leonardesco Canal Port. You can undoubtedly experience an unconventional Christmas here, but magical and evocative anyway.

“It’s the most wonderful time of the year” – (song)

6. Comacchio: Christmas on the water In Comacchio, the relationship people have with the water is visceral. Even Christmas is represented in a maritime style. Markets are set up on boats, and Christmas decorations are accompanied by traditional fishing equipment from the Comacchio Valleys. Dazzling projections of lights and colours play with the reflection of the water, creating an engaging atmosphere. The Nativity is represented in the Comacchio style: under the numerous canals of the town, as many nativity scenes in maritime style are placed on traditional local boats. Each work is original and made of different materials.

Moreover, each crib is enriched with fishing tools to respect the lagoon tradition. Undoubtedly, the greatest spectacle takes place at sunset, when the lights of the cribs harmonise with the natural reflections in the water. Comacchio's Christmas is indeed surreal. Finally, the town organises concerts, travelling shows, events, and initiatives to entertain adults and children during all the festivities.

5. The Florence Eye and the light show in Florence

The enchantment of Florence needs no introduction, but at Christmas, the city becomes even more fascinating and...enjoyable. For the festivities, the historic centre is closed to traffic. So, suppose you want to take advantage of the magic of Christmas to visit the timeless Medicean city. In that case, you will be greeted by an almost entirely pedestrianised Florence: only public transport and shuttles providing communications to the main attractions will be allowed. It will also be easier to enjoy the city's shopping.

However, one of the main initiatives adorning the city during Advent is the skating rink, the longest in Europe. Located in the Fortezza da Basso gardens, the rink is flanked by a 50-metre high Ferris wheel, already renamed Florence Eye. There are also the traditional and famous Florentine Christmas markets, such as the German market in Piazza Santa Croce. Finally, we would like to point out the traditional F-Light Festival. Projections on their facades colour Florence's significant historic buildings to give citizens and tourists a magical Christmas.

For a perfect Italian Christmas tour, you cannot miss vising Naples. Here, Christmas is rooted in the city's bowels, blending with the Neapolitan folklore and traditions. First and foremost, the nativity scene: San Gregorio Armeno needs no introduction. The world-famous street of nativity scenes welcomes visitors all year round. Still, the atmosphere and sensations strolling along this street dotted with ancient shops are most appreciated in this period. In addition to the classic nativity statues, master artisans sculpt famous characters every year. Who will be this year? It's worth finding out!

We would also like to point out the Christmas markets set up in the charming Pietrarsa National Railway Museum. Here, the Christmas stalls are set against the backdrop of beautiful historic train carriages. The museum also hosts workshops, theatre shows and guided tours. There are also concerts and travelling exhibitions. On the other hand, children can find Santa's throne in the Sala del 500: sitting on the legs of Saint Nicholas, they can ask for presents and take a photo.

Finally, we must warn you: the magic of Christmas in Naples fills the eyes, but above all, the belly! If you are visiting the city, you can't help but follow in the wake of the scent of sweets and other delicacies. Moreover, every occasion is suitable for a toast. If possible, the genuineness of Naples becomes even more enthralling during the Christmas festivities. 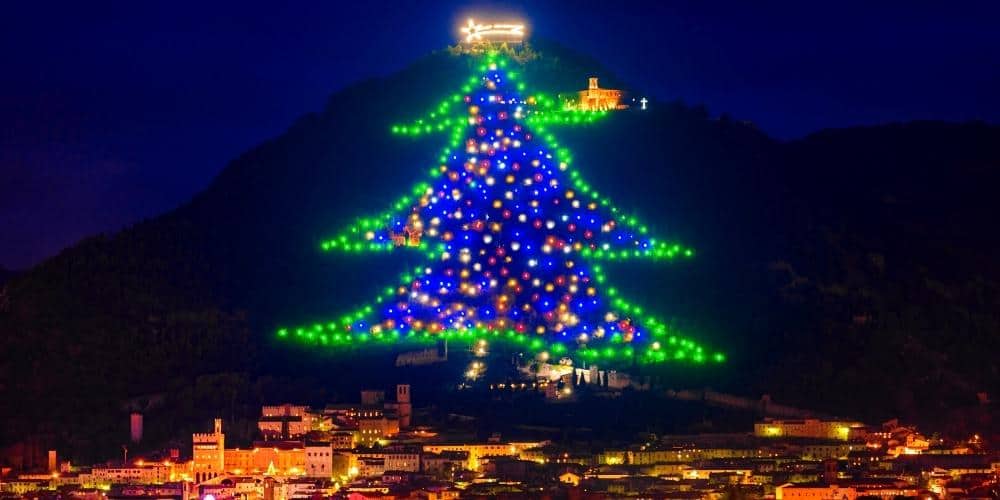 In the heart of Italy, the medieval town of Gubbio is home to the world's most giant Christmas tree. The Umbrian town's famous Christmas symbol was lit for its 41st edition this year. In fact, its inclusion in the Guinness Book of Records dates back to 1991. More than 700 metres high, the tree is actually a gigantic silhouette outlined by 300 points of light. Located at the foot of Mount Ingino, which overlooks the city, the tree has a star installed on its tip. Its surface has an area of 1,000 square metres and 250 lights that draw its outlines. Four hundred multicoloured lights illuminate the tree inside the silhouette, giving it a majestic aura. 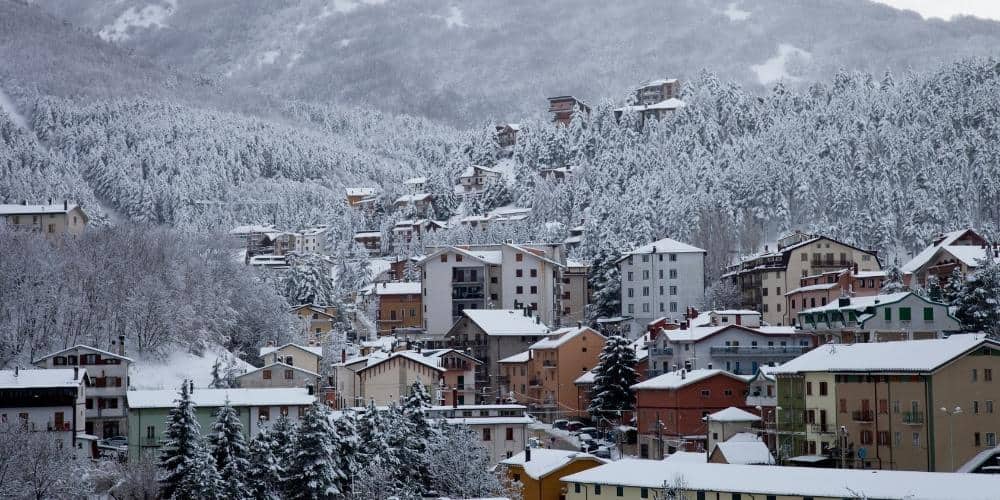 If Christmas is all about snow for you, Roccaraso is the perfect destination. The Abruzzo town offers a wide range of snow sports and activities, including snowboarding, cross-country skiing, snowshoeing, Nordic walking, snowmobiling, and more. However, the magic of Christmas in Abruzzo is all in the festively decorated city centre. The biting cold can be fought with a delicious hot chocolate, strolling through the illuminated shop windows and the beautiful markets in Piazza Leone. The typical wooden houses with handicraft products, the scent of mulled wine, the decorations that illuminate every whitewashed corner, the snow that falls in flakes: during the Christmas holidays, the mountain landscape of Roccaraso is tinged with magic.

1. The Puppet Fair in Lecce

Lecce (Apulia) keeps a centuries-old tradition. Set against the splendid Baroque backdrop of the Duomo and Piazza Sant'Oronzo, the enthralling Fiera di Santa Lucia (better known as the Puppet Fair) dates back to the 16th century. Anciently, the fair heralded the start of the days leading up to Advent.

Today, it is a craft fair in which master artisans show off their skills by modelling the so-called pupi (puppets), the characters that animate the Salento nativity scene out of wood, clay and paper-mâché. Pupi are the typical figures of the nativity scene, such as the washerwoman, the baker and the blacksmith. Still, the unique feature lies in the choice of materials, the meticulousness with which they are worked and the amazing final result. The precious creations are displayed at the fair, and you can also purchase them to have a unique Christmas souvenir.