Sorrento Coast: Vico Equense, a holiday for all tastes

Sea, hills, mountains, spas: all this is possible in Vico Equense, the first municipality on the Sorrento peninsula which, with its 16 hamlets, offers history, culture, trekking routes and wellbeing.

Vico Equense, from the blue of the sea to the green of the hills and mountains

Sea, hills, mountains, thermal baths: all this is possible in Vico Equense, the first municipality of the Sorrento peninsula which, with its 16 hamlets, offers history, culture, trekking routes and wellbeing thanks to the Scrajo thermal centre. The sulphurous water that gushes out of several underwater springs has many therapeutic properties, especially for the treatment of skin affections, rheumatic and otorhinolaryngological pathologies.

The history of Vico Equense has very ancient origins, some findings have shown that the first evidence of life dates back to the seventh century BC. There have been many different populations: Romans, Greeks, Barbarians, Saracens, Angevins and Aragonese. 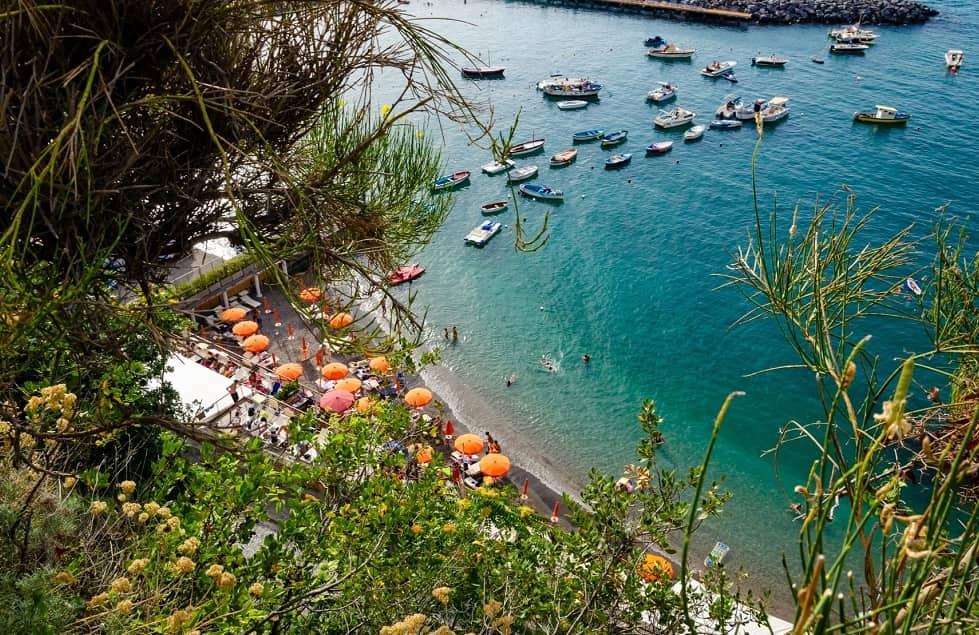 In the historical centre of Vico, which retains the characteristics of a medieval village, as well as getting lost in the overhanging views of the sea, it is possible to visit the Giusso Castle and the former cathedral of Santa Maria Annunziata, built on a rocky spur overlooking the sea and featuring Gothic architecture and a pink Baroque façade. The Giusso Castle was built by Charles II of Anjou between 1284 and 1289 to defend the small village and to use it as a summer residence. Over the years, it has alternated between different owners and has undergone reconstructions. The Neapolitan jurist Gaetano Filangieri died inside the castle in 1788 and his remains are kept in the Church of the Annunziata.

Art lovers can admire frescoes by an anonymous pupil of Giotto, dating back to 1300, in the Chapel of Santa Lucia, located in the hill hamlet of Massaquano.

For lovers of the sea, Vico Equense offers small beaches, some of which are only accessible by sea, such as the Spiaggia della Tartaruga (Turtle Beach), which takes its name from a rock that resembles the shape of this tortoise. Alternatively, there is the beach of Pezzolo, famous for the remains of an ancient Roman villa (2nd century A.D.). Seiano beach is very popular, especially with families.

In 2021 Vico Equense was awarded the Blue Flag in Campania for its clean and crystal clear sea.

The itineraries for nature lovers through the hamlets of Arola or Santa Maria a Castello up to the chain of the Monti Lattari (Monte Comune, Monte Faito and Sant'Angelo Tre Pizzi) are very suggestive. There are many mountain itineraries in Vico Equense, all with breathtaking views.

In Vico Equense, there are many museums. Since 1992 in Vico Equense there is also one of the most important scientific museums of Campania: the mineralogical museum of Campania with more than 3500 specimens of 1400 different species of minerals from all over the world and also a section dedicated to fossils of the main geological eras.

Vico Equense is also a gastronomy centre with its "provolone del monaco" cheese and the famous "Pizza a metro", but above all it is possible to taste excellent fish dishes or products of the local vegetation in many trattorias and farmhouses that can be found along the "Casali", but for the most demanding palates there are also gourmet restaurants with starred chefs.