Whether you choose to visit Sorrento Coast in Winter or Summer, it will always be able to surprise you and let you feel the irresistible need to point a camera and take a picture on one of its many cultural and natural beauties. Here are some spots for your perfect artistic and photographic tour in Sorrento Coast.

Let's start with the first Sorrento Coast location from Naples. Castellammare di Stabia is a densely populated city with thousand of richness.

When you arrive at its Villa Comunale, take a pic of its Sounding Box, one of Italy's most characteristic band soapboxes, from the artistic point of view that preserves its first-20th-century liberty features.

Between Castellammare and Vico Equense, Mount Faito is the mountain chain Monti Lattari symbol. Into its sinuous hairpin bends, it gifts you glimpses of breathtaking, which, as far as the eye can see, show us a postcard of the entire gulf.

The peculiarity of this mountain is that it is genuinely very close to the sea, and there are different spots where photography's lovers can take a shoot. One of the best is its Belvedere. A cliff where you can see the Pozzano's hill and the Gulf of Naples. It gifts a breathtaking show during the sharpest days, particularly on the sunset, where it is possible to see until Domizia Bay's coast.

The Cathedral of Annunziata overhanding the sea 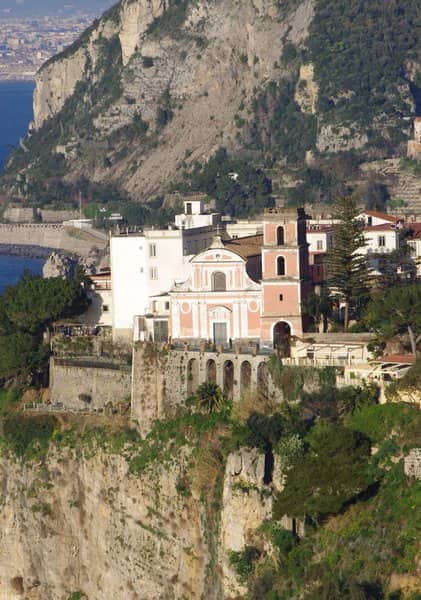 Especially for its scenographic impact and cultural importance, you can avoid including in this itinerary the Cattedrale dell'Annunziata, the church of Vico Equense. Founded at the beginning of the XIV century, its facade faces on a rocky spur directly above the sea. It represents a rare example of gothic architecture on the Sorrento Coast.

You can reach the church through its alleys in the old town. They are unique because they suddenly open on the sea. 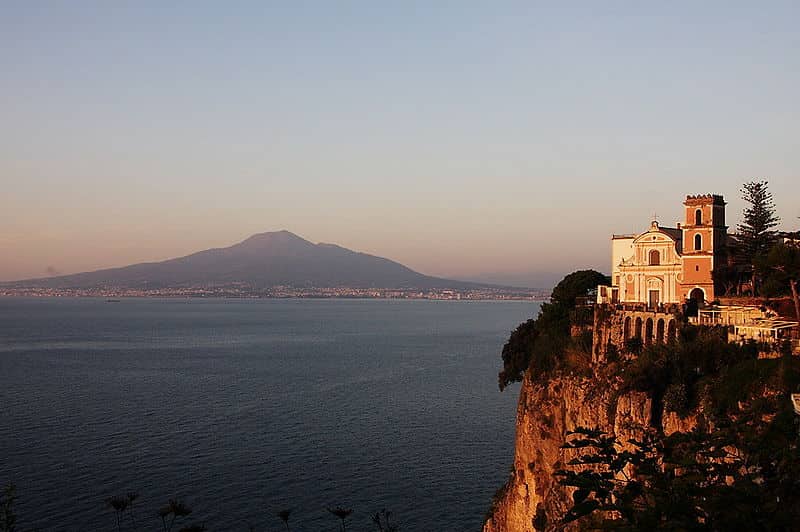 Speaking about the Vico Equense's alleys, one of the most characteristics is short but suggestive Via Punta Mare. There is a stairway, go back it and go on till Villetta Paradiso. Here, there is a Belvedere where you will see in front of you the Vesuvius with the Gulf of Naples and a view of Cattedrale Dell'Annunziata.

The perfect shoot is guaranteed! 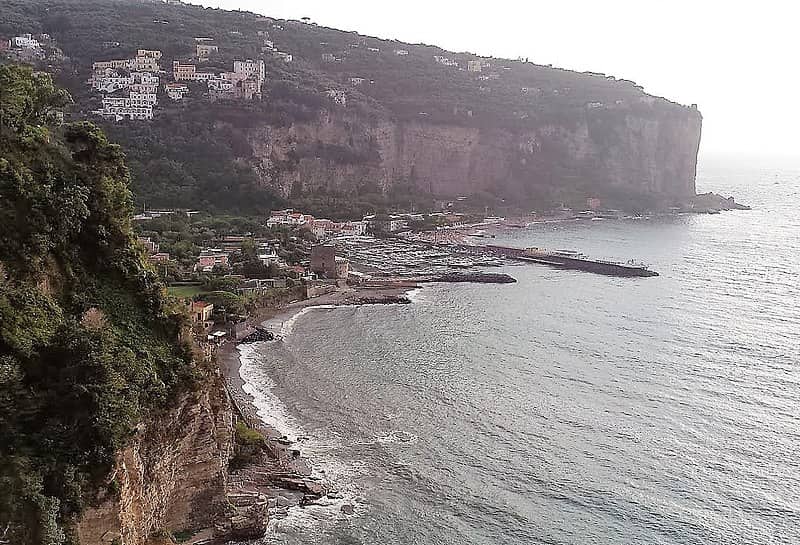 As well as the ancient boroughs, don't lose a walk and picture to the Vico Equense's sunset from its Marina Aequa's seaport. Then, if time and season allow, it is also possible to swim and sunbathe, choosing both equipped and accessible beaches.

The name Aequa is because here was founded the first old inhabited nucleus, characterised by archaeological ruins. 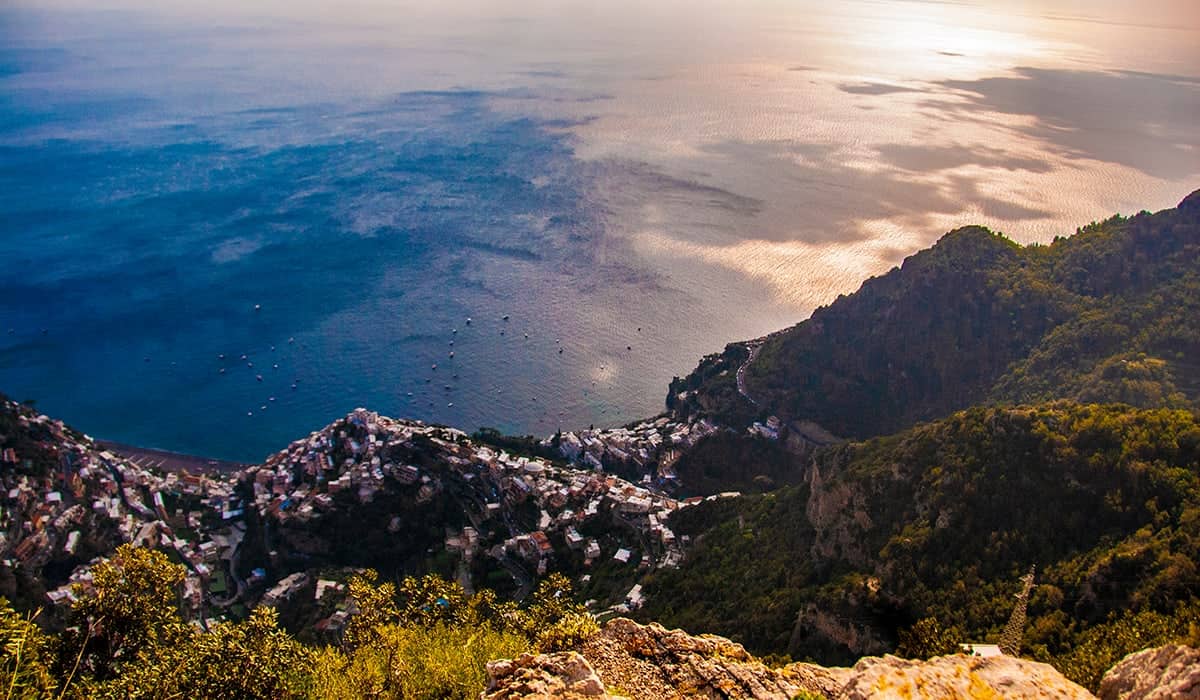 Santa Maria del Castello is the highest-located village of Vico Equense, an important crossroad for the hikers. It is at 650 m on a rocky cliff steeply to Positano.

Santa Maria del Castello is a quiet place where the only noises come from far. Here the gaze can wander till the sea's horizon.

The small square with the Church of Madonna del Lauro (Meta) After Vico Equense, there is Meta. Here, it is worth stopping in the small square where there is the Church Madonna del Lauro. Where now there is the church, once there was a Minerva temple. They restored it at different times.

Inside, very suggestive, are the marine ex-votos. The people of Sorrento Coast are very proud of their nautical tradition and boast a very long tradition in the navy.

If you are looking for a location for a perfect pic, don't leave Meta without taking pictures from its Belvedere Sorrento. A scenic spot where it is possible to admire a fantastic landscape that will leave you without words.

It is a landscape where nature has expressed all its abilities. 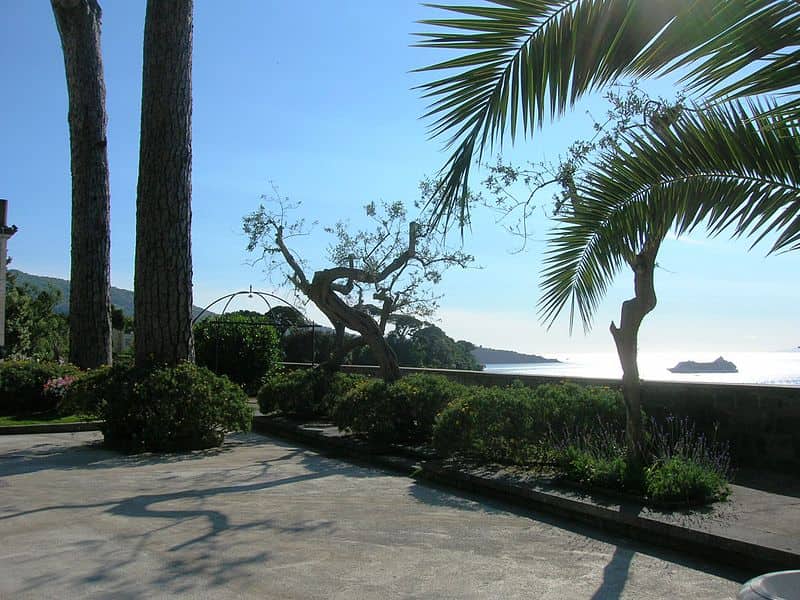 In Piano di Sorrento, in a location unique for its scenic beauty and cultural heritage, there is Villa Fondi de Sangro. It is in neoclassical style and hosts inside the Georges Vallet archaeological museum of Sorrento Coast.

Of particular visual effect is its nymphaeum, owned by a Roman villa founded in Marina Della Lobra in Massa Lubrense. Now, it is here to preserve the beauty of its mosaic.

Next to this is a Belvedere with a majolica dome from which it is possible to enjoy a view crazy. La Marinella is a terrace in Sant'Agnello, the village just before Sorrento, and it has a breathtaking landscape.

A romantic and photographic place where you admire and shoot the sunset—the perfect location for stopping and drinking.

On the top of a natural bay that hugs the infinity, sea and sky meet each other. 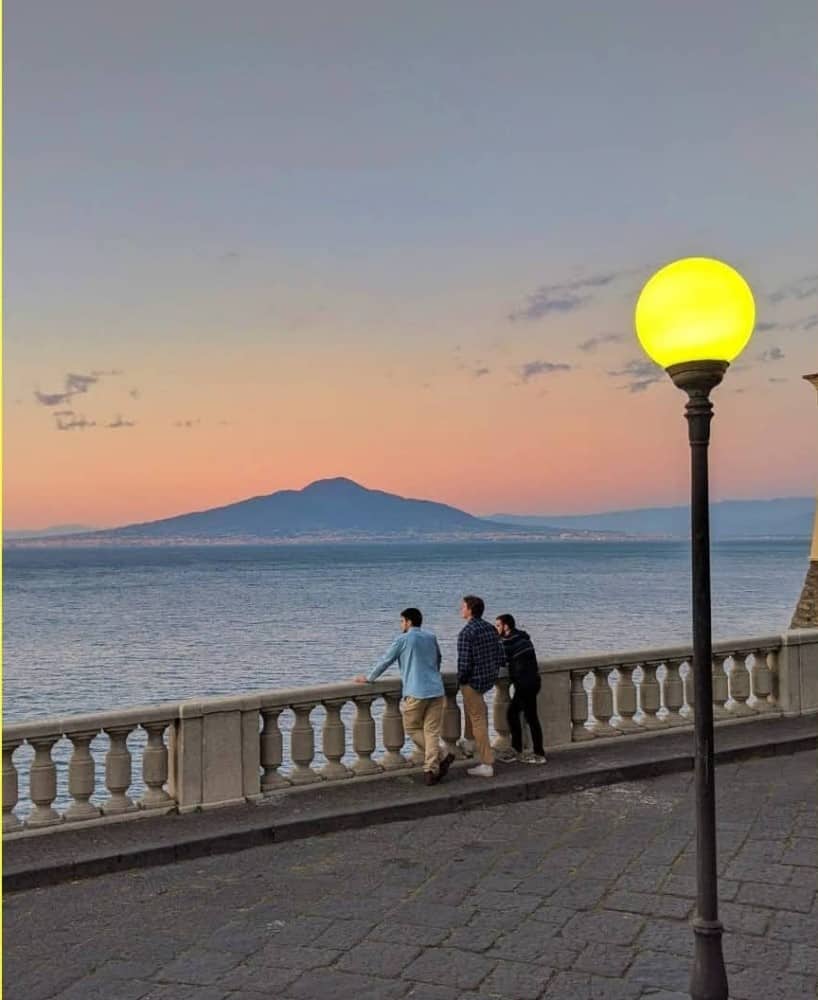 When we arrive in Sorrento, we understand that the city's heartbeat is its main square, Piazza Tasso, dedicated to its famous citizen Torquato Tasso.

Here is a stunning balcony where you can admire one of the most beautiful and suggestive glimpses in Sorrento Coast. Then at Christmas, it takes a still merveilleuse charming, decorated with all the lights. 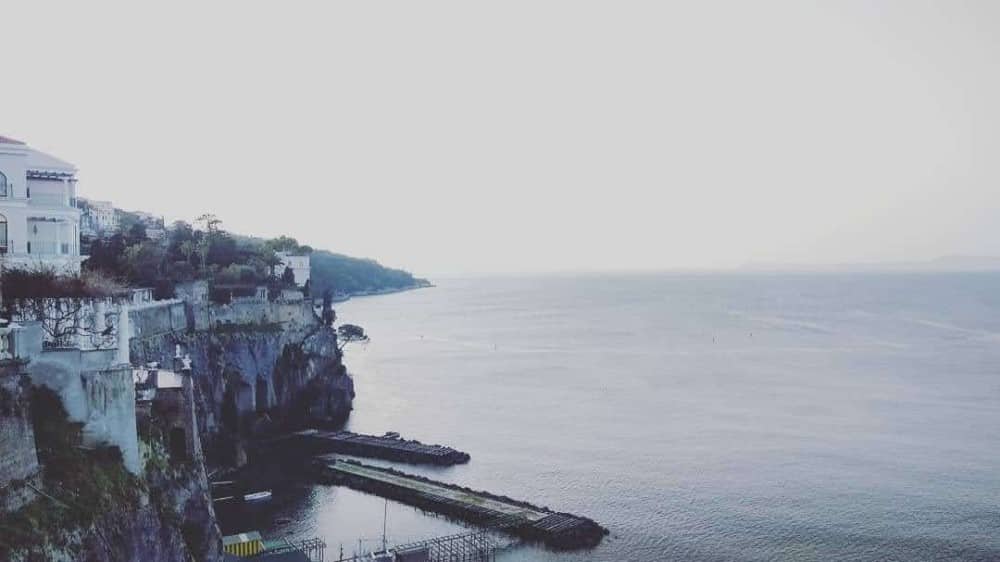 The Sorrento Villa Comunale is full of sea view branches, where there are San Francesco beach and cloister.

From here, the beach's view will offer a fantastic shoot. If you want to go there, you can take the steps or the lift in the Villa.

After taking a pic of the beach, you must take one in the 14th-century San Francesco cloister. It is a place of cultural solid interest and romance, considering its frequent use as a wedding location. 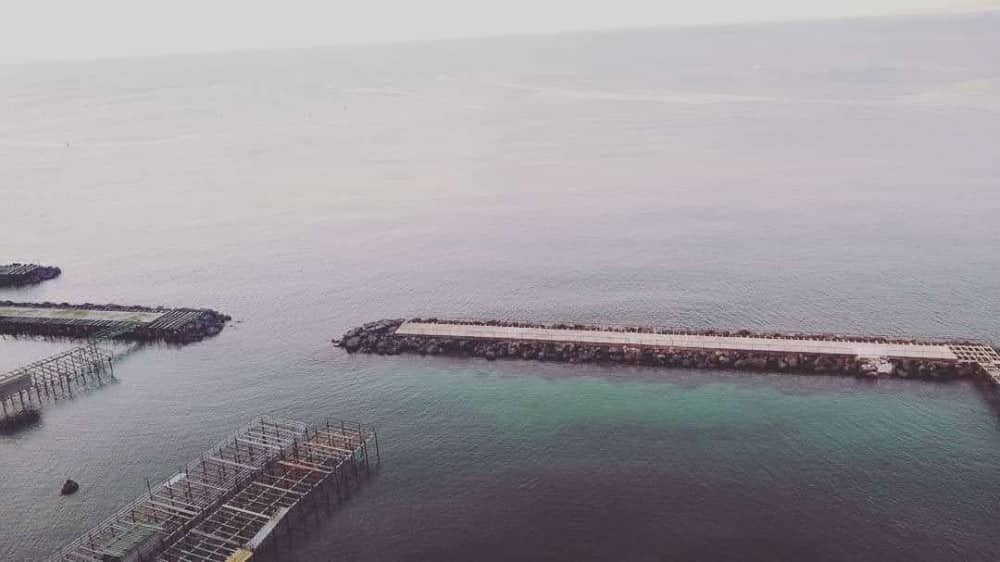 Bagni Della Regina (or Baths of Queen Johanna) is a natural pool that opens towards the sea through a breach in the rock. Its name is because, during the XV century, Queen Johanna II D'Angio-Durazzo loved to swim here.

Still today, it is one of these glimpses ables to inspire strong emotions. Going down to Marina Piccola through the staircase cut into the cliff and watching the city from down is worth going down. Otherwise, you can reach Marina Grande through a less steep path but possibly more panoramic.

From both, it is possible to go to the beach and swim (in Summer) or to have a boat trip visiting Roman villas ruins (for example Pollio Felice's villa). Or also, to admire from a different perspective the Peninsula's rocky cliff. 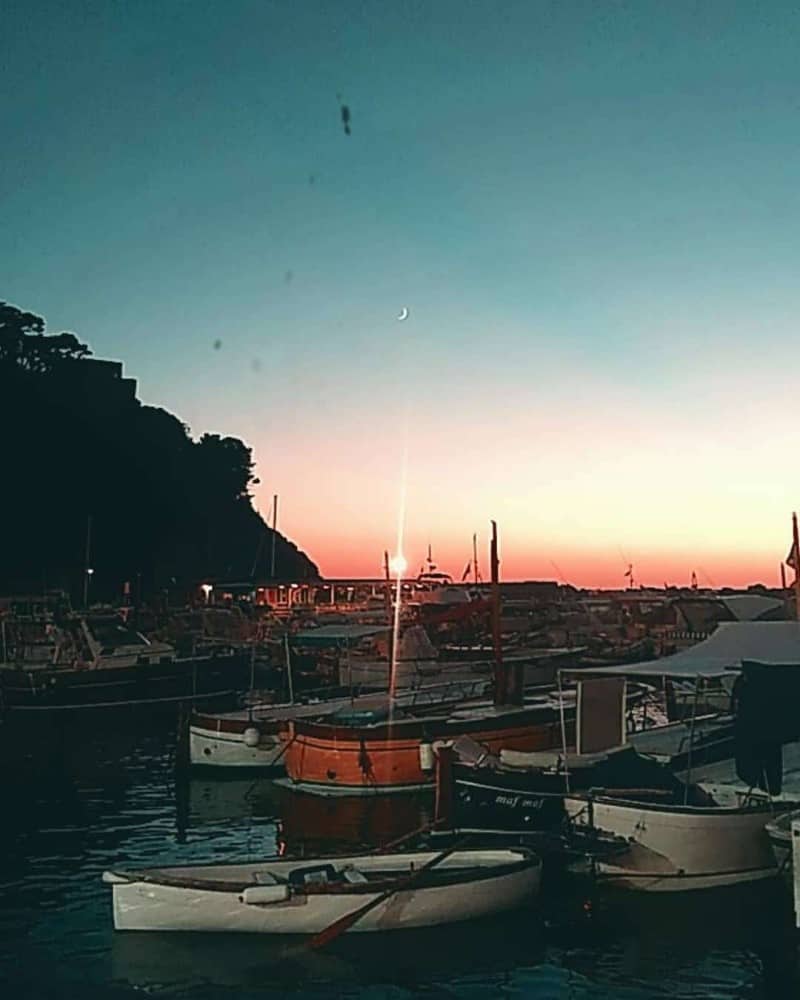 Marina Della Lobra is a typical fishing village in Massa Lubrense. There is a small beach, a seaport and typical houses in Mediterranean style.

It now adapts to the new tourism demands. These tiny houses have become guest houses, and the boats' storages became bars and restaurants where spend happy moments close to the sea. 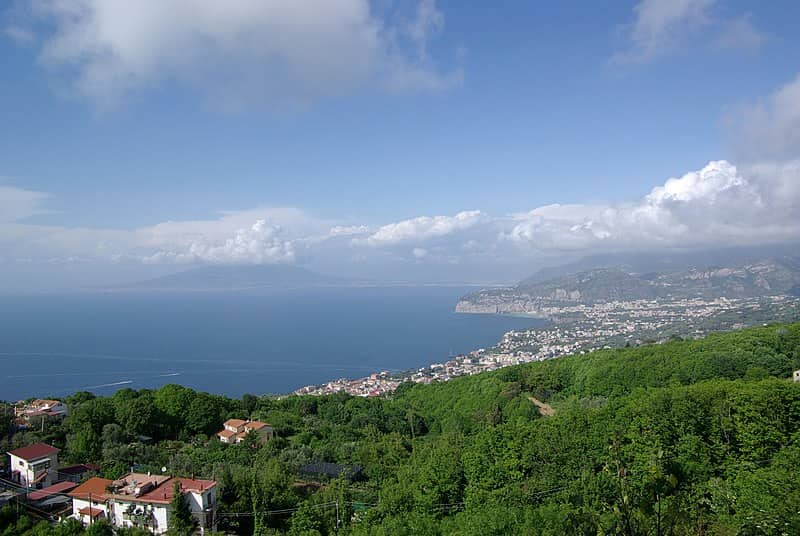 Sant’Agata Sui Due Golfi is a small village, considered by the history's expert Domenico Antonio Parrino “the only one for its beauty”.

It is famous for the landscape from its Carmelite heritage called Deserto. From here, you can enjoy a circular view of the Gulf of Naples and that one of Salerno.

The panoramic path of Punta Campanella 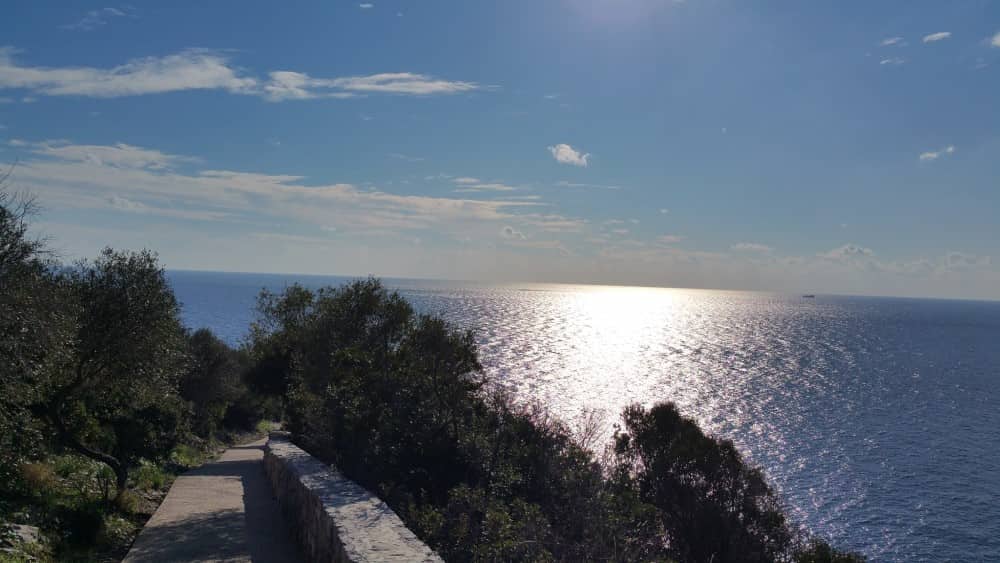 Punta Campanella is one of the most beautiful spots in Sorrento Coast and its extreme point. Since 1997, to preserve its wonderful natural spaces, it has become a protected area.

Along the border between sea and earth, in front of Capri. In 1300, at the end of Punta Campanella, was built a Saracen watchtower. According to the legend, it hid the bell stolen from the church of St. Antonio in Sorrento. It is said that a Saracen pirate ship dropped it into the sea, and every 14th of February, it is thought that the bell rings under the sea.

It is easy to reach Punta Campanella, thanks to the paths and trails. You meet olive trees and the lush Mediterranean vegetation, which will give you glimpses and landscapes unique in the world.