The Aeolian Islands are one of the most magical places in the Mediterranean. Discover them with a sailing holiday!

Situated in the Tyrrhenian Sea, the Aeolian archipelago consists of seven islands of volcanic origin of various sizes, some with craters still in activity. The seven island are: Lipari Vulcano, Salina, Panarea, Stromboli, Filicudi, and Alicudi. Since their morphology represents a historical model in the evolution of the studies of world volcanology, they were designated as a UNESCO World Heritage Site in 2000.

The whole world envies these magical places surrounded by crystal-clear water and rocky cliffs of intense colours made even more vivid by the volcanic formations typical and unique to these islands.

Colours, flavours, scents, the Aeolian Islands, as well as being historically important, have also become a symbol for different kinds of holidays, from the luxury to the more adventurous ones. For this summer 2022, discover them on a catamaran or sailing holiday.

Sailing holidays in the Aeolian Islands 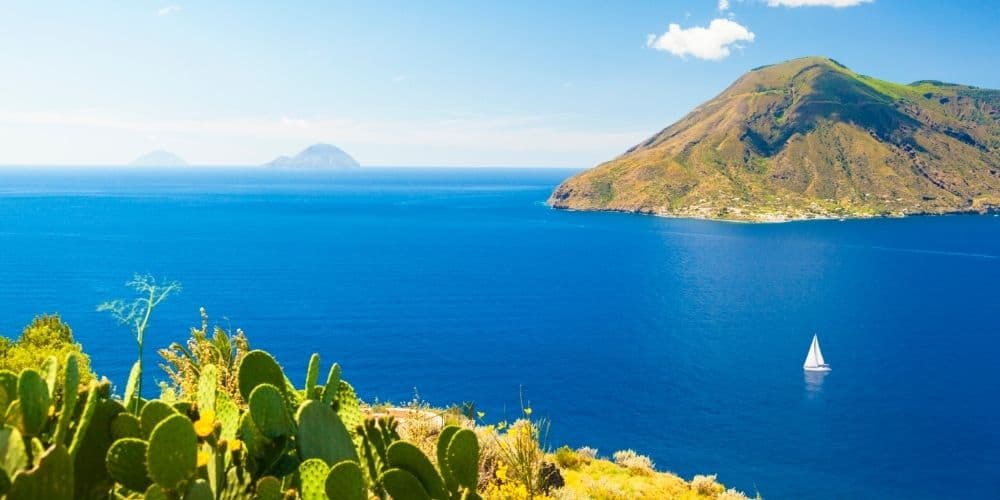 One of the most popular itineraries is sailing among the Islands trying to discover the most hidden spots of the islands while listening to the sound of the sea, the rustle of the breeze between the sails or between the trees, losing yourself in evocative sunsets.

There are many companies that offer cruise packages from 3 to 15 days with the possibility of extending your tour beyond the Aeolian archipelago.

The choice of a sailing boat is perfectly suited to the geographical conformation of the Aeolian Islands and to what they offer: in few places you can combine relaxation and adventure at sea during the day with the fun and excitement of going ashore in the evening. Alicudi and Filicudi are the perfect places for those seeking pristine nature and silence.

Formerly called Phoenicusa, since it was covered with ferns, Filicudi is accessible from the harbor to the east, or from the village of Pecorini, on the southern side.

The most beautiful areas can only be discovered by boat: the sea stack la Canna, the islets of Montenassari and Giafante, the Scoglio della Fortuna and the suggestive large cave of the Bue Marino.

In the evening, mooring in front of the small village of Pecorini A Mare, you'll find a famous and appreciated pub that proposes excellent appetizers made up of Sicilian wine and typical food such as arancini, fresh summer Sicilian dishes, and much more.

The island of Alicudi is even more "mystical" and inaccessible, as the docking has recently been facilitated by the Palomba landing. The contrast between the land and the blue sea surrounding is enchanting. Lipari is the main and historically the most important island. It has been inhabited since the Palaeolithic period, as it can be seen from the ruins of the Castle, located on the ancient Acropolis, and dating back to the 6th century BC, where now there is the Aeolian Archaeological Museum.

The white colour that covers the beaches and the whole island is due to the pumice quarries of Porticello. These places are not to be missed: the Faraglioni to the south, in front of Vulcano, Marina Lunga, the tourist port of Pignataro, where it is possible to stop and go ashore and take a tour of Marina Corta.

Panarea is loved by high society because of its world-famous nightclubs. As well as being a favorite destination for young people, Panarea is also very popular among diving lovers for its clear waters and enchanting seabed. During the day you can visit the Bronze Age village on the promontory of Punta Milazzese, whose cliffs form Cala Junco, one of the most beautiful places of all the Aeolian Islands.

Salina, the island of Massimo Troisi's "Il Postino: The Postman" movie, is also the greenest island of the archipelago with its high and steep coastline. Its ancient name was Dydime which means “twin” because it is formed by two peaks of volcanic origin, Monte Fossa delle Felci and Monte dei Porri. Then it was called Salina because of the salt pans to the southeast, behind Punta Lingua.

La Pollara is the beach with the abandoned houses of the fishermen, whereas Rinella, characterized by black caves, has been transformed into a small port. Once in Salina, you must try the local pane cunzato (seasoned bread) and the Sicilian mulberry slush. On the Vulcano island, the beaches are black and there are sulfurous muds and thermal springs. It is a popular destination for sportsmen who can go trekking to the highest part of the island from where you can admire the archipelago. Sailing allows access to the most beautiful places on the island such as the Grotta del Cavallo, Piscina di Venere, the beaches to the south, and the coves to the west.

Visiting Stromboli is a truly natural experience. Its volcano is one of ten active volcanoes in Italy and one of the six volcanoes in the world that are constantly erupting. Visiting the island by sea, you can see the famous Sciara del Fuoco, the steep wall along which the incandescent material descends and ends up in the water, and the characteristic Strombolicchio, a rock in the north that rises steeply 56 meters above the Tyrrhenian Sea. 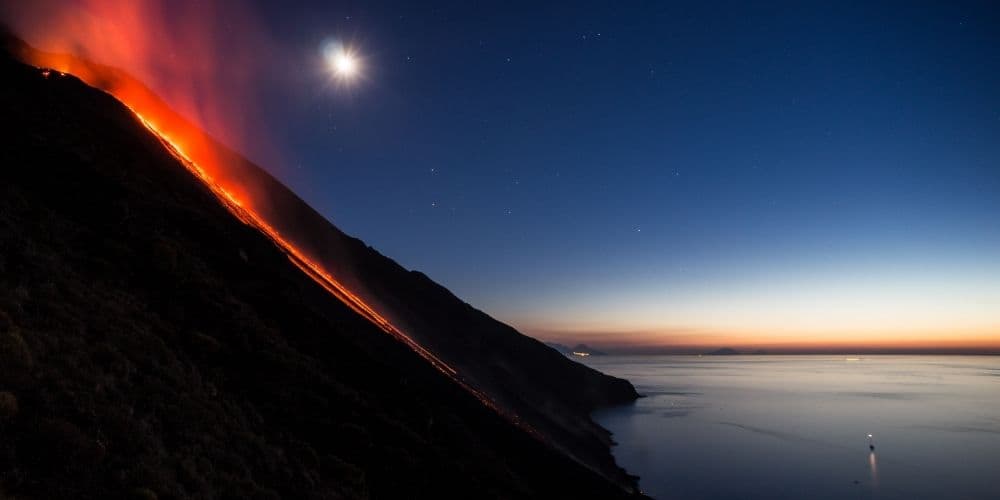