How to go to Venice: lagoon nearest airports

On the shores of the Venetian lagoon stands the Venice-Marco Polo International Airport.

To reach the narrow streets of the much-dreamed-of Venice, every year more than 10 million passengers land at the Venice-Marco Polo Airport, located along the coast of the Venetian lagoon. Hundreds of daily flights depart and arrive here, including national, international and intercontinental flights. Venice Airport is one of Italy's most important airports from which you can easily reach all the art cities of the Veneto region as well as the surrounding regions, including Friuli-Venezia Giulia and Trentino-Alto Adige.

However, 25 kilometres away from Venice there is also the Antonio Canova Treviso Airport, Venice's secondary airport, which is used by charter flights, air freight forwarders and low-cost carriers such as Ryanair. Located 3 kilometres from the centre of the magnificent Treviso, this airport is an excellent alternative to the Venice airport to reach the lagoon city while also having the opportunity to visit and get to know Treviso, a lesser known but uniquely beautiful city. Here there is all the information and details you need in order to organise your flight to Venice in the best possible way.

Venice Airport, named after the famous Venetian merchant and traveller Marco Polo, is located on the shores of the Venetian lagoon, 13 kilometres away from the city centre. The current terminal was inaugurated in 2002 and the building accessible to the public has three floors. It is Italy's third busiest airport, with almost 15 million passengers in total in 2019, including those going to Treviso airport.

The airport is well connected to the centre of Venice, both by land and by sea. If you land at Venice-Marco Polo you can then move to the city by taking ACTV public transport line 5 (bus) to Piazzale Roma (20 minutes). Another alternative is the public bus operated by ATVO, with the arrival point always at Piazzale Roma. It is also possible to reach Venice by sea, thanks to Alilaguna (the first public transportation service connecting Marco Polo airport to the city centre through boats), with destination San Marco (1 hour and 12 minutes), Rialto (57 minutes), Fondamenta Nuove (38 minutes), Le Guglie (42 minutes). Finally, you can also opt for taxis and water taxis. 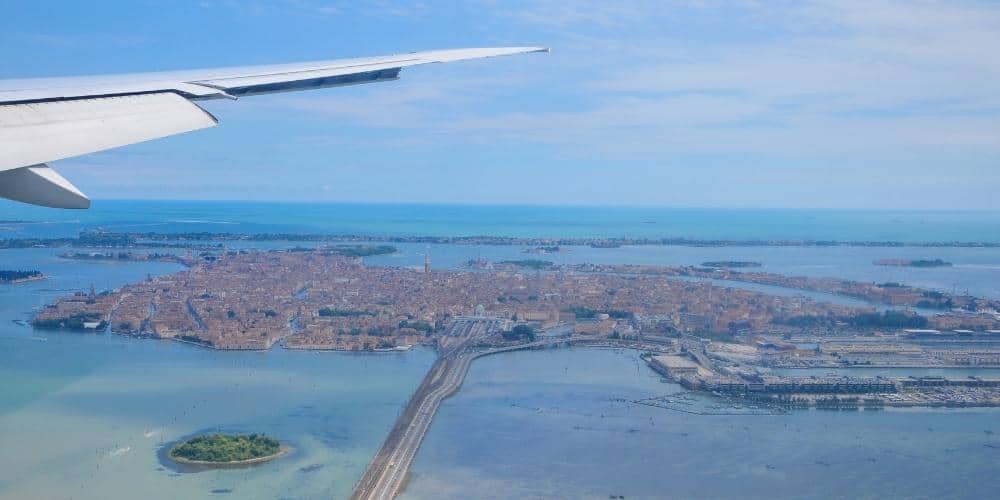 View of Venice from the airplane

Hundreds of national, international and intercontinental flights depart and land daily from Venice International Airport. There are numerous destinations in Europe, but also beyond the continent: direct intercontinental flights link the Serenissima to Russia, the United Arab Emirates and various states in North Africa. Flying to Venice airport is also a unique experience: the scenic view from the plane will allow you to observe all the little islands of the lagoon from above, and you will be able to distinguish every monument in the city, such as St Mark's Campanile and the Rialto Bridge. 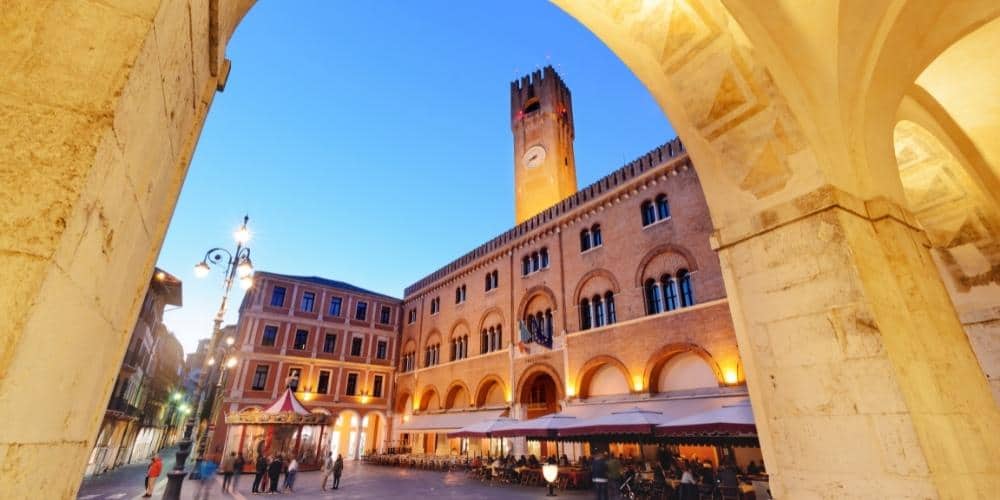 The main square in Treviso

Treviso Airport, named after Treviso sculptor Antonio Canova since 2007, is located just 3 kilometres from the centre of Treviso and 25 kilometres from Venice. Treviso Airport is today the secondary terminal of Venice, where low-cost flights, including Ryanair and Wizz Air, are routed. Flying to Treviso is certainly a cheaper alternative, given the lower prices of the companies operating from the airport, but it is still very convenient to reach Venice or other cities in the Veneto region.

In fact, the airport is well connected to both Treviso and Venice. A shuttle bus (ACTT Line 6) will take you directly to Treviso train station from where you can easily reach other cities. There is also the ATVO TREVISO AIRPORT bus, which connects Piazzale Roma in Venice directly to the airport. A stop in Treviso is a must on your journey. A lesser-known city, perhaps overshadowed by the grandeur of Venice, Treviso has many hidden treasures to discover, among its canals and noble palaces.