Why is Rome called the Eternal City

Of all the different nicknames that describe Rome, undoubtedly, one universally known definition is the Eternal City. Do you know why?

Rome needs no introduction, it's simply Rome! Geographically, it is the heart of Italy, halfway up the country, almost equally distant from the North and South. From an administrative point of view, due to the presence of the leading institutional seats (government, ministries and Parliament), it is where the State's life takes place. In terms of landscape, it offers everything one could need in nature: lakes, plains, mountains, hills, sea and even snow in winter. Historically, it represents our origins, the cradle of world civilisation and a history of which we can be proud.

As for art and culture, this city is an open-air museum stratified and sedimented over the centuries: it is the testimony of a glorious and immortal past. In regard to food and wine, Rome is an unmissable stop on a tour of authentic flavours. Many epithets have been given, some for one reason and some for another. The name represents the authentic personality, defining its destiny. It is no coincidence that the Latin phrase Nomen omen means "a name a destiny" or "destiny in the name". The Eternal City, which is not the only one as we will see shortly, undoubtedly holds the most intimate and profound meaning. Ready to discover why? 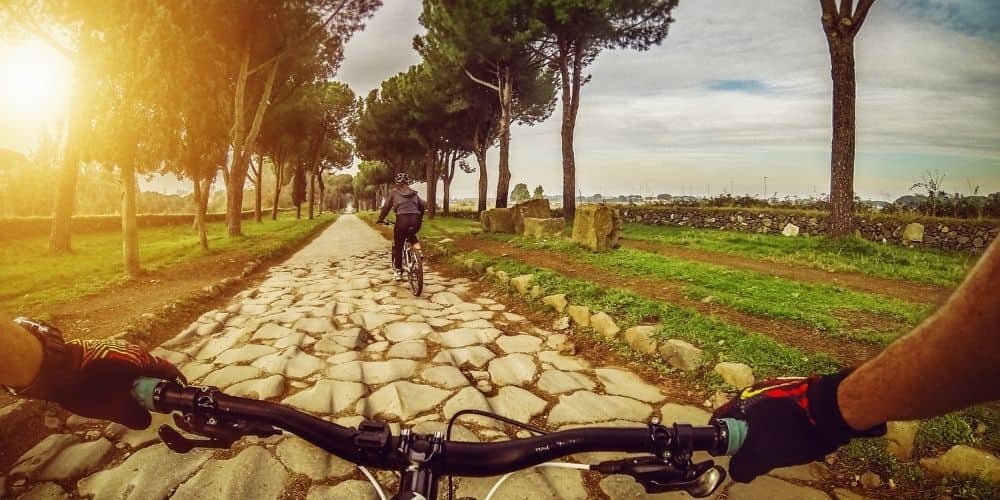 A stretch of the ancient Appian Way

A city with an immense artistic and cultural heritage studded everywhere with monuments and places of great value, Rome has been given various names. Perhaps the first appellation given to it is due to the specular reading of the word ROMA. In a palindromic phrase attributed to the Latin rhetorician Quintilian, ROMA becomes the two-faced word AMOR (which in Latin means love). «ROMA, TIBI SUBITO MOTIBUS IBIT» or «In Rome, love will suddenly come to you from passion». Rome is love (amor), as if to seal the bond between the city and Venus, the mother goddess of the mythical founder of the Romans, Aeneas. Virgilian poem or not, no one can deny the evocative and romantic character of the capital.

Also called Urbe, from the Latin Urbs, as it is the city par excellence, it is the ideal concept that identifies the very idea of a city. Bridges, aqueducts, roads, and engineering masterpieces, most of which still survive today, have earned the name Urbs by vocation and nature. A system to be envied by modern infrastructures.

Regina Aquarum or the City of Water 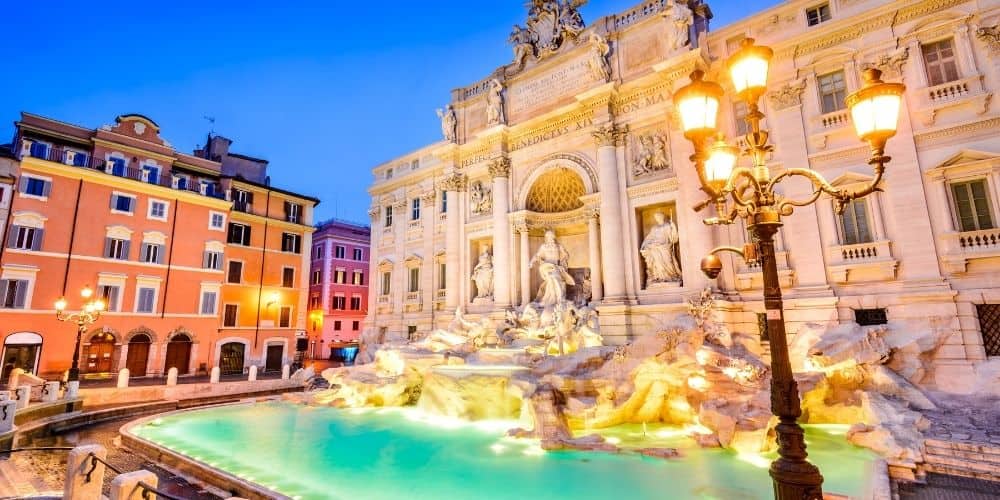 Rome is also known as Regina aquarum (literally Queen of the Waters) or the City of Water. Although it does not overlook the sea, the reason for this name is easy. The city is situated on the banks of the Tiber River, which has been a witness, or rather a protagonist, of its flourishing commercial development and river traffic. This waterway played a crucial role as a communication channel for transporting the materials needed to build imperial Rome. It hosted ports of great strategic importance, mills, boatmen and washerwomen.

Today, we can see boats on the river: several barges have become restaurants. So is Rome called the City of Water because of the Tiber? Absolutely not; there's more to it than that. Think of the numerous aqueducts that supplied the city and the more than 2,000 fountains. One of them, the Aqua Virgo Aqueduct (19 B.C.), has continued to bring water to the Romans for over two thousand years and feeds three of the most admired works in the world: the Trevi Fountain, the Barcaccia Fountain (Spanish Steps) and the Fountain of the Four Rivers (Piazza Navona). 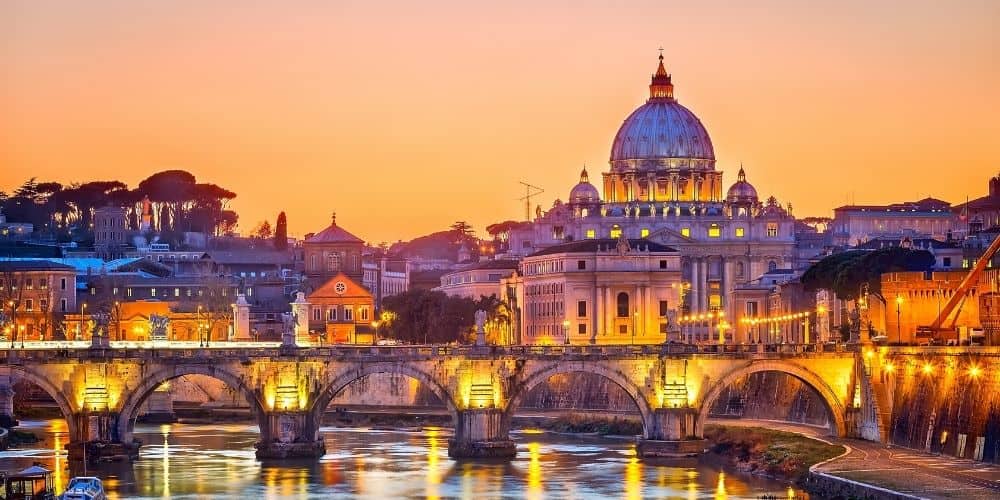 Undoubtedly, better known is the appellation Caput mundi, i.e. "Capital of the World". This name is due not only to the glory and power of the Roman Empire but also to its central and strategic position in Italy, the Mediterranean basin and the whole world. Rome became the hub of culture, progress and the harbinger of a civilisation that wrote history. It would seem that this epithet was extrapolated from a passage in the Pharsalia of the Latin poet Marcus Annaeus Lucanus. «Ipsa, Caput Mundi, bellorum maxima merces, Roma capi facilis» which means «Rome itself, capital of the world, the most important prey of war, easy to subjugate».

The definition of Caput fidei, i.e. "the Capital of the faith" or the Holy City, is certainly more predictable. Due to the Vatican and the power of the Church, Rome has always been associated with spirituality and religion. Moreover, it was (and is) the final stage of the pilgrimage along the Via Francigena, which, from Canterbury, runs for about two thousand kilometres. Another symbol of the universality of Rome, capable of uniting peoples and cultures.

Why is Rome referred to as the Eternal City 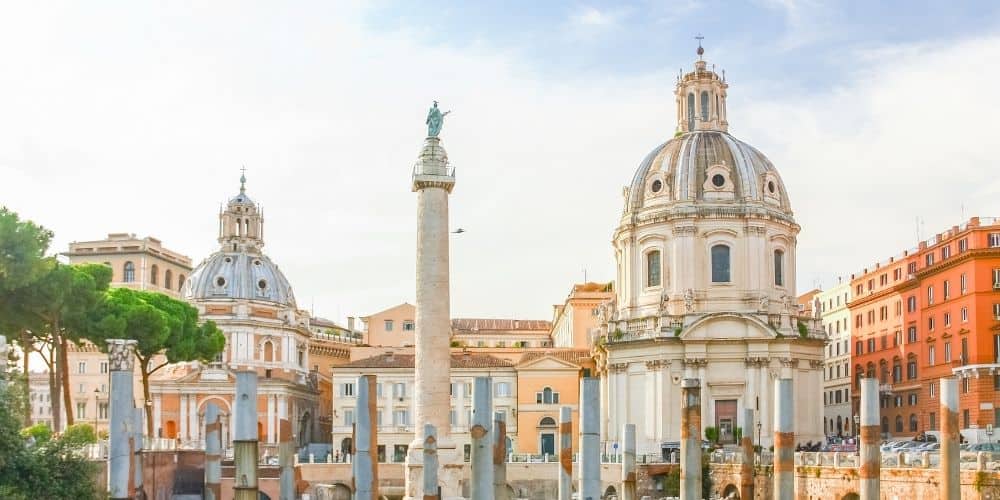 Partial view of the Imperial Fora

Last but not least, the name Urbs Aterna. In other words, the Eternal and Immortal City is impervious to the passage of time. The Latin author Albius Tibullus (1st century BC), not exactly well known, first introduced the expression Urbs Aeterna in the second book of his Elegies. The poet wrote: «Romulus aeternae nondum formaverat urbis moenia», which translated means «nor yet had Romulus raised the walls of the Eternal City». However, Rome's eternity was long mistakenly attributed to Emperor Hadrian in his prophetic words «Other Rome will come, and I cannot imagine its face; but I will have helped to form it. [...] Rome shall live, Rome shall perish only with the last city of men». Nothing could be more wrong! It is actually a passage from Marguerite Yourcenar's famous novel Memoirs of Hadrian. Therefore, it is not a sentence uttered by the Roman emperor but a small excerpt from the work published in the mid-1950s (when Rome's fame as the eternal city was well established).

Beyond this, the fundamental thing is the sense of the statement. If Rome were to disappear, then the human race would be extinct. There can be no humanity without Rome. Whoever the author may be, these words reveal the function of Rome, which, over the centuries, has been the cultural, spiritual and political reference point for the entire globe. The city bears witness to a glorious past that will never fade, a responsibility that few other cities in the world can claim. As a resident or visitor, you can't help but breathe in this atmosphere of eternity, admiring treasures and ancient splendour in every corner of the city.

Rome is not like any other city. It is a great museum, a living room to be tiptoed through