The 5 most famous fountains in Rome

Are you a fan of fountains? And are you also in love with the "eternal city"? Visit Italy takes you to Rome to discover the most beautiful and famous fountains, where a souvenir photo is a must.

Rome's fountains are only part of the wide variety of treasures scattered around the city. Many of them have a very long history and were designed and then built during significant periods in the history of Rome and Italy as a whole. In the squares and streets of the capital, you can see how important the issue of public water (and freely accessible) is, which has seen the eternal city in the vanguard since ancient times.

This is how a mini-tour of the city's most famous and iconic fountains begins.

The beautiful fountain is located in the central Piazza di Spagna, at the foot of the Spanish Steps. It is visited by thousands of people every day.

Its history begins in the early 17th century, when Pietro Bernini, father of the famous Gian Lorenzo, built the fountain in the form of a barge. About its shape, tradition says that on Christmas Eve 1598, after a flood, a boat was found at that very spot.

The ship, known as the 'barcaccia', has a tapered shape and is immersed in an oval pool, and in the centre of it is a second fountain from which a gush emerges. The latter is one of the first examples of a monumental fountain conceived entirely as a sculptural work that can blend into the urban fabric.

4. Fountain of the Pantheon 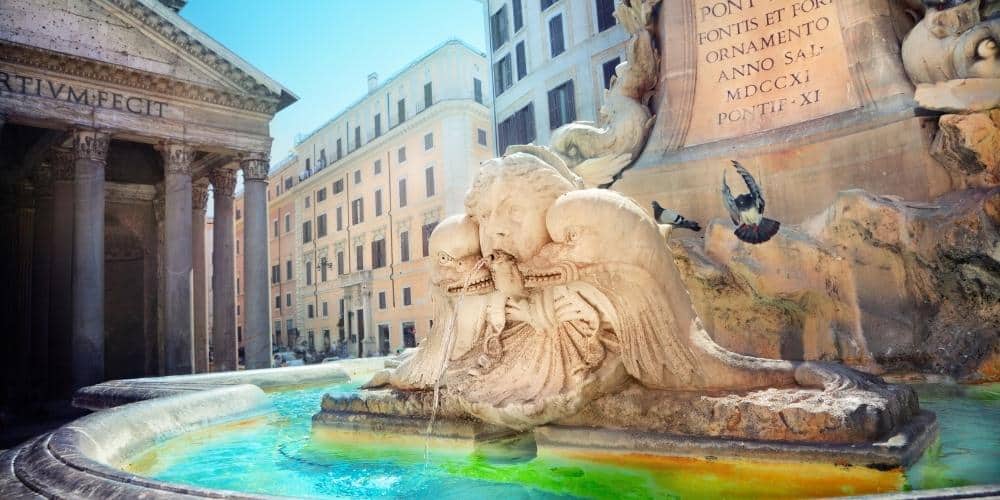 Now we are exactly in front of the Pantheon where there is the excellent work designed by Giacomo Della Porta, a pupil of Michelangelo Buonarroti who started it in 1575. Several sculptors took part in its creation, including Leonardo Sormani. He carefully chose the right amount of travertine and Carrara marble. The fountain consists of a sizeable mixtilinear basin resting on a platform with three steps. In the nineteenth century, Pope Clement XI completed an ancient obelisk placed on top of the monument, and Filippo Barigioni's restoration gave it its present form.

3. Fountain of the Four Rivers

Fountain of the Four Rivers in Piazza Navona was built in the middle of the seventeenth century on the commission of Pope Innocent X. This was thanks to the genius of the sculptor, one of the great masters of the Baroque, Gianlorenzo Bernini.

As with many other fountains, this one is based on an obelisk from the Roman era and is greeted by a large sculptural group representing the four continents then known.

Seventeenth-century geography is transformed into an image by the personification of four great rivers of the ancient world: the Danube, the Nile, the Ganges and the Rio de la Plata.

The gigantic statues are set in an environment that recalls the continents they refer to in a combination of elements that are among the most beautiful in art history. An authentic Bernini masterpiece to be known and visited at least once in a lifetime.

The large Acqua Paola fountain is considered the terminal part of the Trajan aqueduct (named after the Roman Emperor). It is located on the top of Janiculum Hill, where the fountain is remembered as one of the Roman hills.

It was built by Giovanni Fontana and Flaminio Ponzio in the early 17th century as a vast 'facade' monument, similar to several other fountains in Rome, such as the Acqua Felice in Piazza San Bernardo, not too far from Termini Station.

Its monumental architecture has become one of the city's symbols, given its presence in numerous Italian films, including Paolo Sorrentino's La Grande Bellezza, winner of the Academy Award for Best Foreign Language Film in 2014.

The Trevi Fountain is undoubtedly Rome's most famous fountain. It has been featured in numerous films, including Federico Fellini's La Dolce Vita. An extraordinary Anita Ekberg plunges into the fountain, calling a young Marcello Mastroianni to her side.

The idea of a fountain in this space was already present at the beginning of the 15th century. In 1453, there was a project developed by Leon Battista Alberti. Two centuries later, it was Gian Lorenzo Bernini who conceived a monumental fountain in the Baroque style. But these projects, although fascinating, encountered problems in their realisation.

The architect Nicola Salvi realised this idea. Between 1732 and 1766, I completed the great public work, which was a true masterpiece.

Its complex architecture is among the most famous and appreciated globally. It has even been replicated in the Seoul underground. The composition is centred on the figure of Oceanus driving a shell-shaped chariot pulled by winged horses and governed tritons.

A triumph of characters set in a scenographic context occupying the entire lower façade of the Poli building, now the Central Institute for Graphics headquarters. The fountain is also in the centre of popular tradition: many people try their hand at the coin toss. People turn and throw a coin towards the fountain, keeping their eyes closed; an ancient ritual that wishes good luck and happy returns to the city.