The Infiorata of Genzano, a few kilometers from Rome and in the frame of the Castelli Romani, is an event that attracts thousands of visitors not only from Lazio. The centuries-old tradition of art capable of moving and, this year, of representing the return to life too.

Origins of the Flower Carpets

This ancient tradition first took place 243 years ago, exactly in 1778, when the streets of Genzano were coloured and filled with flower petals for the very first time. A municipality in the province of Rome, Genzano is one of the most densely populated towns in the Castelli Romani area, located on the outer slope of the volcanic crater of Lake Nemi and along the Appian Way With its altitude of 465 m above sea level, it was once a guard post at the lake. In addition to the Infiorata, the town is also famous for the Genzano bread, the first ever to be awarded the I.G.P. mark by the European Union.

Since then, every year, on the occasion of the Corpus Domini feast, this particular religious, historical and folkloristic event of Lazio, famous all over the world, comes to life. Historically, the Infiorata is a festival intimately and deeply connected with the Catholic celebration of Corpus Domini, whose origins date back to the 13th century. In fact, in conjunction with the Procession of the Blessed Sacrament, flowers were scattered "with full hands".

An immense expanse of flowers covers about 2000 square metres, divided into various "paintings"  in the seventeenth-century central Via Italo Belardi (formerly Via Livia). The scale of the Flower Carpets or Infiorata is great, attracting thousands and thousands of tourists. In addition to the plant essences, over 350,000 flowers are needed to create these unique "carpets", the petals of which are used by the skilful mastery of expert florists as if they were pigments on a painter's palette: the yellow of broom, the red of carnations, the green of boxwood and wild fennel.

On Saturday evening preceding Corpus Christi Sunday, work begins on the ground, followed by the laying of the petals, which is completed on Sunday morning to accompany the afternoon procession. On the following Monday, the floral carpet is "invaded" with music and colours, thanks to the local band and folk group parading through the streets of the town. Finally, the "spallamento" (lit. unravelment) the most eagerly awaited moment, especially for young people and children which run from the steps of the Church of Santa Maria and unravels all the paintings of flowers.

Over the 242 years of the event's existence, many illustrious people have honoured Genzano with their presence, including Andersen, Gogol, Massimo D'Azeglio and August Bournonville. In particular, the anecdote of Giuseppe Garibaldi during the Infiorata of 1875 held in his honour remains famous. Invited to pass, and therefore to trample, the enormous carpet of flowers, it seems that he refused, declaring: "Some divine things are not to be trampled!".

Although the highlight of the event is concentrated in just three days, it should be emphasised that the Infiorata requires a long period of preparation that is practically non-stop, with work starting as soon as the event is over. From January to December, there are several stages in the preparation of the final preparation.

January-February: the sketches are designed and prepared March: the sketches are chosen and implemented April: the flowers and plant essences required for the flower arrangements are counted. May: the works of the Infiorata begins. June: flower "stripping" (separation of the petals from the corolla stored in the town's caves), creation of the works for the Infiorata dei Ragazzi (minor edition dedicated to the young 2 weeks before Corpus Domini) and the traditional Infiorata. July-August: inventory of plant material to be stored in the caves for the next event. September-October: choosing the dates for the next edition together with the religious community. November-December: choosing the theme for the next edition.

Curiosities about the Flower Carpets 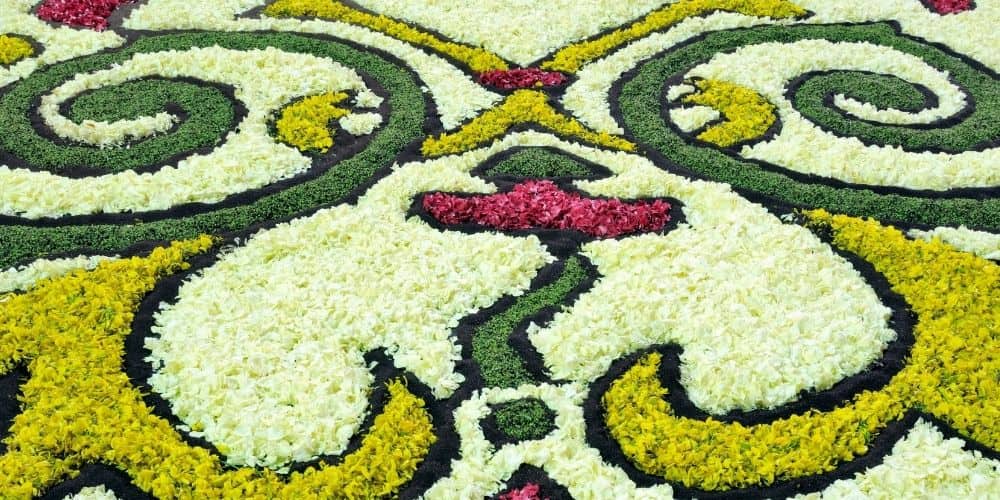 As the name itself suggests, Infiorata (from the Italian term "fiore"- flower- means that the undisputed protagonists are the flowers whose petals are masterfully arranged on a "carpet" using ancient techniques that are brought back to life and renewed thanks to the creative flair of the Master Florists.

However, a special place is occupied by one flower, in particular, the carnation (Dianthuscaryophyllus L.), a local species of the Mediterranean basin. With its corolla and curled ends, it lends itself well to this creative "mission" thanks to its various colors and numerous shades, although red carnations are mainly used.

Each painting is strictly made with material from nature and the plant world. As well as flowers, there is a long list of leaves, earth, bark - pine bark, black vine, maize, rice, sage, chili pepper, wheat, soya, pine nut husks, oregano, coffee black, bran, pine cone black - all essential and necessary to reproduce the subjects to be represented through the various shades and colors as realistically as possible. Human figures, animals, geometric or decorative motifs, the aim is to represent a suggestion starting from the beauty of creation - flowers - which culminates in the art of floristry.

Because of the particular importance of this spectacular artistic interpretation, the Italian Ministry of Tourism declared the Infiorata di Genzano di Roma in 2011  a Heritage of Italy for Tradition, as it is "an expression of the ability to promote tourism and the national image and to enhance the history and culture of the territory with an interpretation appropriate to today's times".

Acknowledgment that, beyond the title, is reaffirmed and confirmed every year with the presence of thousands of visitors who do not miss this striking riot of color. In addition to the flowers, the role of the Master Florists is undoubtedly fundamental, if not essential, as they use simple petals to create authentic works of art that will move anyone who looks at them.

Skilfully created chromatic effects, knowledge of plant species, treatments for their conservation, petal-laying techniques... This and much more is required by this ancient profession, a true art that is handed down from generation to generation to keep alive a tradition to be jealously protected.

While last year's theme was "The Sacred in Art, Beauty, and Nature", for the 243rd edition of 2021, on the occasion of the 700th Anniversary of Dante Alighieri's Death, there would have been no alternative but to dedicate the Infiorata to the Supreme Poet. Therefore, the leitmotif of all the flower works will be specifically "La Rinascita... e quindi uscimmo a riveder le stelle" (lit. "The Renaissance...and so we went out to see the stars again" a title taken from the famous verse 139 of the Divine Comedy, precisely from canto XXXIV of the Inferno poem. In addition to being inspired by the Divine Poet, the "carpets" of flowers symbolize rebirth, the return to life after the pandemic that struck the entire planet. A burst of optimism and hope, after last year's event was reduced to an online video and scattered initiatives by the Master Florists.

Through flowers, colors, and the art of flower arranging, the emotions, pain, sacrifice, and losses we suffered during the pandemic are to be represented. A period that has deprived us of contact with family and friends, of socializing in general.  Out of the blue, we have renounced events of all kinds and as well as artistic beauty. This is a  sort of redemption to return to life and knowledge, to be free again, and above all to recover our place in the world.

This year, due to the emergency situation caused by the Covid-19 pandemic, the 243rd edition of the Infiorata di Genzano will not take place as usual. Therefore, we will not see the classic event which will be rescheduled and reorganized. Two smaller stations - located at Parco Sforza Cesarini and Palazzo Landi - will replace the "big carpet" in Via Belardi on 5 and 6 June and, exceptionally this year, on 12 and 13 June from 10:00 to 19:00. An Exhibition of floral paintings will be set up alongside a photographic exhibition in homage to the traditional Infiorata. The programme, on 5 and 6 June, includes an exhibition by Maestra Margherita Pistelli and Maestro Marco Casini, the young people from the Bottega dell'Infiorata workshops, the Association Folklandia at the Parrocchia dei Landi.

On 12 and 13 June, visitors can admire the floral works of the Masters of the Accademia dei Maestri Infioratori (lit. Academy of Master Florists) Master Assunta Giacchetti, and Sabrina Sandrini.

The photographic exhibitions will be carried out thanks to the collaboration of the Proloco -a local association with the aim of promoting the territory- and the precious contribution of the Donne in Fiore, a group of female volunteers. Finally, in the Parrocchia Landi -the Parish dei Landi- a flowered painting of a sacred subject will be set up for the traditional Corpus Domini celebration.

For the occasion, the Museo dell'Infiorata (lit. Museum of the Flower Carpets) will also be open to the public to allow them to get to know and appreciate the history of Genzano's tradition.

For further information, please visit the web www.culturagenzanodiroma.it (only available in Italian)

The Earth laughs in flowers