Sicily: land of sun, history, Baroque, traditions and crafts. When you discover it, you are struck by the richness of colors that joyfully invade everyday objects, clothes and accessories; whoever visited it wants to bring a piece of the wonderful Italian island. Therefore, we have written a mini guide to the shopping of objects made in Sicily, also helped by the very good guys of Vulcanika, shop of excellence craftsmanship. Specialized in the realization of "cuffe", we speak about them later, in their shop in Catania and on their site www.vulcanika.it you will find many objects and gift ideas, at Christmas and throughout the year. Ready? Amuninni! (let's go!)

The Sicilian cart and the puppets

The most symbolic objects of the Sicilian tradition are certainly the cart and the puppets. The first, built around the nineteenth century. has long been the preferred means by peasants, who employed it to transport people and goods. The small size does not have to suggest a simple realization, as behind there is a complex work of cutting wood. The rich hand-painted decorations that characterize the cart, in addition to a protective function of wood, serve to ward off the evil eye and represent biblical and chivalric scenes. Speaking of knights, how not to remember the puppets? They are the famous puppets that enchant adults and children recalling the stories of the paladins of Charlemagne. Carts and puppets are widespread throughout Sicily, with particular elements for every city. 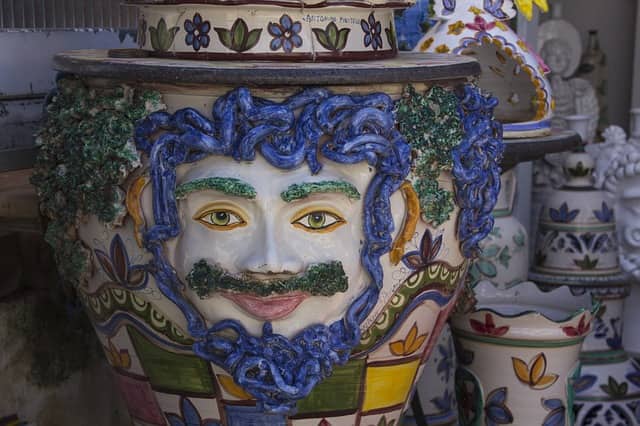 The town in the province of Catania is known worldwide for its beautiful and colorful ceramics. From vases to decorations for the house, they are hand painted with bright colors that recall the sun of Sicily. The most famous objects of all are the Moorheads, heritage of Arab domination, whose fascinating story we talk about here.

The cuffe (or coffe, or 'cuffinu') are bags made with the softest leaves of the dwarf palm and come from the rural tradition, when they were used to transport food or fodder to animals. They are among the most beautiful fruits of Sicilian craftsmanship as they are entirely handmade, from the skillful weaving of leaves to decorations in trimmings, embroidery, applications such as mirrors and pompoms. A must have for fashion addicted. If you are in the mood for a really sought-after gift, on the website www.vulcanika.it you will find beautiful models, also customized.

We remain in fashion and match it with another symbol of Sicily, the Etna volcano. With lava stone it is possible to create decorative objects, as they are light and easy to work. From the land to the sea, the beautiful sea that bathes the island gives the precious coral, with which beautiful jewels are made.

Finally, for the most greedies, a nod deserves the delicious chocolate made in Modica. About this excellent product it is known that it was introduced by the Spanish during their domination and that it is still made only by hand, avoiding the production in industrial scale. Thanks to its special cold processing and its particular texture, more rough and grainy than the common chocolate, it has won the renowned PGI brand.