The history of the Moors head: from ancient legend to fashion trend

The traditional Sicilian vase almost always represents a man and a woman because the story of its origin tells about a love story without a happy ending...

The Teste di Moro are decorative ceramic pots hand painted depicting the face of a man and a woman. The symbol of Sicilian art and culture is the result of a legend that has spread over the centuries even though nowadays it is known all around the world thanks to the excellent manufacture of Sicilian craftsmen. Behind the Teste di Moro also known as Graste ( in Sicilian dialect), lies a story of love made up of passion, betrayal, jealousy, and revenge.

The legend of the Teste di Moro

We are in Palermo, around the year 1000, in the Arab neighborhood of Kalsa. There lived a beautiful girl, who spent her days caring for her plants. One day, from the top of her wonderful balcony, she was noticed by a Moor. As soon as he saw her, he immediately fell in love with her and did not hesitate to declare his love. The flattered young woman passionately reciprocated the sentiment of the Moor, but their story that began with such passion was in danger. Soon the young woman discovered that her beloved had to return to the east where he had a wife and children. In the middle of the night, betrayed and humiliated, the girl blinded by her jealousy, killed her man while she was sleeping and cut off his head, and created with it a kind of vase in which she planted basil. The plant with its inebriating scent, a symbol of royalty but also love and passion, grew luxuriant so that the neighborhood started to create pots in terracotta with the Moor’s head features. 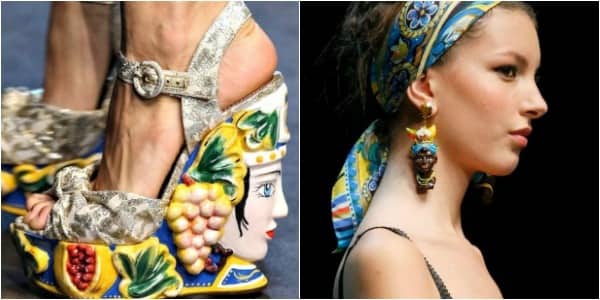 The beauty of faces, the richness of decorations, the brilliance of colors, it's impossible not to be enchanted by Moor's Heads. These beautiful vases are fashionable as supplements for home and as outdoor furniture, especially when combined with a distinctly Sicilian or Arabic style ( The Teste di Moro of Caltagirone are famous since the town produced very high-quality ceramics). Fashion has also been seduced by this story: both pots, which hold a crown and a turban that calls back to the east, are often decorated with jewelry, flowers, and citrus fruits. The luxury brand Dolce & Gabbana in 2014 made a collection made in Sicily with the teste di Moro as characters.