All over the world - and locally - Italian gastronomy is famous and appreciated also for its desserts: from north to south each region has its own specialty capable of satisfying every palate. In this article will be 10 typical Italian desserts

Italian gastronomy is appreciated all over the world also thanks to its long and varied tradition about desserts, distinguished from region to region. From north to south, desserts have been created over time that are still consumed and loved by Italians and non-Italians. In this article, 10 have been selected:

10) 'Maritozzo' with whipped cream from Lazio It consists of a small loaf mixed with flour, eggs, honey, butter and salt cut in half and filled with whipped cream. Its origins date back to the ancient Roman civilization as a dessert consumed by the poor population: during the Middle Ages it became the dessert of Lent and then it became the dessert that accompanied the promises of marriage as engagement rings were sometimes hidden inside. It is a typical cake of the city of Ferrara, also known as the 'cake queen of Montenegro' or 'Montenegrina' in honor of Elena Petrovich of Montenegro, wife of Vittorio Emanuele III. The main ingredient of this dessert is dark chocolate which that is mixed with eggs, butter, and flour; thus allowing the creation of a cake whose consistency allows it to melt in the palate, so much so that it is locally called 'Torta Taclenta', or 'sticky'.

8) The Tiramisù from Veneto

It is a dessert made with ladyfingers dipped in coffee and covered with a cream made with mascarpone, eggs and sugar, sometimes flavored with liqueur. According to the tradition, the tiramisù was born in Treviso in the nineteenth century from the sweet peasant 'sbatudin'.

7) The Strudel from Friuli Venezia-Giulia It is an Austro-Hungarian dessert that spread in Friuli Venezia-Giulia region assuming local characteristics, receiving the designation of 'Traditional Italian food products'. It is a rolled pastry based on apples, pine nuts, raisins and cinnamon.

6) The Cantucci from Tuscany These are dry almond biscuits, made by cutting the loaf of dough into slices while it is still hot; they are usually accompanied with vin santo. According to historical sources, they date back to the 16th century and were mainly produced in Pisa.

5) The Seadas from Sardinia It is a dessert made with semolina, lard, cheese and either strawberry tree or chestnut honey (or sugar if necessary) as a condiment and fried at the end. According to some, it owes its name to the cebada, a cereal consumed in the island since the Palaeolithic times; others claim it derives from the Sardinian term 'sebu', which indicates animal fat. It consists in two halves of pasta violada that are wrapped around the filling. Over time, the dessert has been reinvented and in some preparations it is used cooked cheese, in others raw cheese istead.

They are a kind of sweet ravioli made with a chestnut filling soaked in saba, a concentrated grape syrup obtained from freshly prepared must, from which they take their name. The main ingredient is pear and quince jam or fruit chutney, which is combined with a stuffing of boiled dried chestnuts, with the addition of various flavors, in particular lemon zest.

3) The Pannacotta from Piemonte It is a pudding made by combining cream and sugar, flavored with seeds from a vanilla bean and adding isinglass to consolidate the whole once placed in the refrigerator. This dessert dates back to the early XX century and according to some the paternity of the dessert as it is prepared today belongs to the cook Ettore Songia, who would have created the recipe in the Sixties of the last century.

2) The Babà from Naples 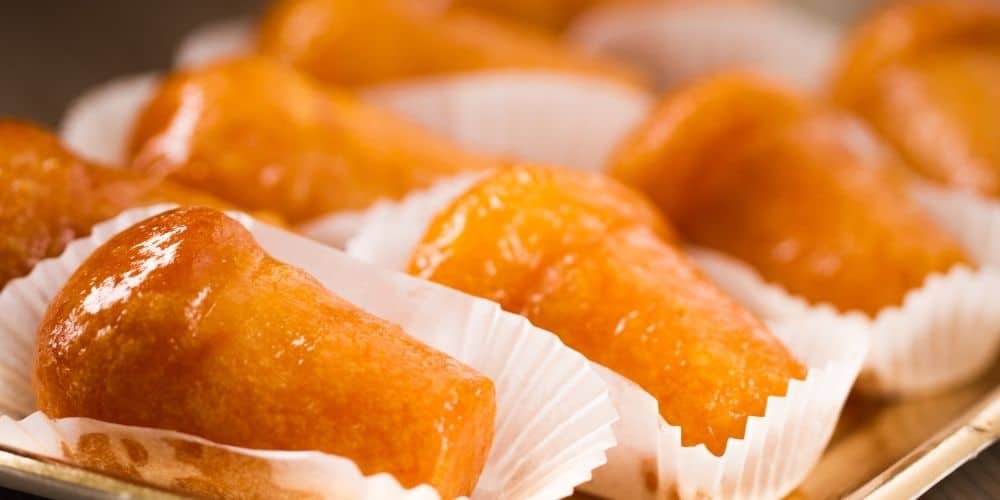 This leavened pastry, which can be made as a cake with a hole or single pastry, would have originated from the exile of the Polish king Stanislao Leszczinski in France. He used to consume kugelhupf, a Slavic dessert, to which he added rum: thanks to Maria Carolina of Habsburg-Lorraine, wife of the king of Naples Ferdinand IV of Bourbon, the dessert reached Naples where it was prepared on his wedding day by the French chefs who traveled with her, since then its preparation spread throughout the city becoming one of its distinctive features.

1) The Cassata from Sicily

It is a cake made with sweetened sheep ricotta, sponge-cake, royal pasta and candied fruits. There are various versions along the island depending on the composition and the use of candied orange peel, candied fruits, pistachio, pine nuts, chocolate, cinnamon, and orange blossom water. The origin of the dessert would be Arab, precisely in the kitchens of the emir palace located in Palermo; and then it underwent through changes during the Norman era and the XVIIth century and reaching the ultimate recipe in 1873 thanks to the Palermo pastry chef Salvatore Gulì. However, the icing cover and the candied fruit topping will only become established from the end of the 19th century. There is a single pastry version called 'cassatina'.