Lake Garda: what to see and do in Malcesine

What to see and do in Malcesine, a delightful village between lake and mountain.

Fifty kilometres from Verona, overlooking Lake Garda and at the foot of Monte Baldo, we find Malcesine, a charming little town built around an ancient fortress. Malcesine is a place that attracts for the beauty of its ancient village with its small squares, a small harbour and lively alleys. The lake offers moments of intense relaxation, walks and romantic views, and in a short time, it is also possible to reach Monte Baldo, for splendid inland excursions and beautiful views from above, over Lake Garda.

Several artists have visited Malcesine and celebrated its beauty. First and foremost, the German poet Goethe visited the village in 1786 and described it in all its beauty in his famous work "Viaggio in Italia".

Let's see together what to see and do in Malcesine, for a journey of culture, nature, sport... and a bit of adrenaline!

" How I wish my friends could be with me for a moment to enjoy the view which lies before me! "

A walk through the historic centre

The first thing to see and do in Malcesine is to get lost in its historic centre! The historic centre is small, very characteristic and can be easily walked around. Around the famous Scaligero castle, among narrow, colourful alleys, small squares and the small harbour, there are many cafés and typical restaurants where you can enjoy the flavours of Veneto cuisine.

Among the most important historical buildings are the church of Santo Stefano and the palazzo dei Capitani, which was the seat of the Scaliger governors and the Captain of the lake. The palace, now housing the public library, was built between the 13th and 14th centuries on the ruins of ancient Roman buildings. It was later renovated and embellished in Venetian style.

The elegant garden overlooking the lake is not to be missed. From the centre in a few minutes, you can reach the lakefront where you can enjoy a nice walk, the beaches and a beautiful panorama! 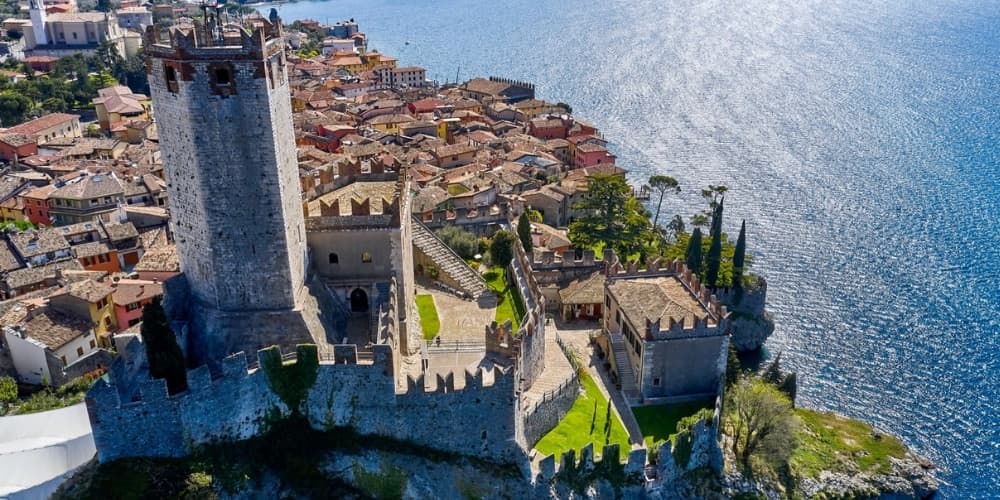 Strolling through the streets of the centre, one reaches the symbol monument of Malcesine: the Scaligero Castle. Historical sources show that an early castle on the promontory of Malcesine was built by the Lombards in the middle of the first millennium AD. In 1277 the castle became the dominion of Alberto Della Scala and remained under the house until 1387.

It later came under the control of the Visconti, the Republic of Venice and the Austrians. Today it houses the Natural History Museum of Monte Baldo and Garda and is used for exhibitions, events and weddings. Among the rooms of the castle, the most famous is the 'Goethe Hall', set up in the powder magazine built by the Austrians. Here you can retrace Goethe's journey to Italy through some of his writings and quotations and admire the drawings made by the German poet during his stay in Malcesine.

The other room is the Hall of the Galleys, which shows two relevant aspects of Malcesine's history: navigation on the lake and the history and various uses of the castle over the centuries. As well as being cultural, the visit to the castle leads to the most panoramic points of Malcesine. From the platform of the Rivellino and the castle tower, there is a beautiful view of the old town centre, the lake and the western flank of Monte Baldo. 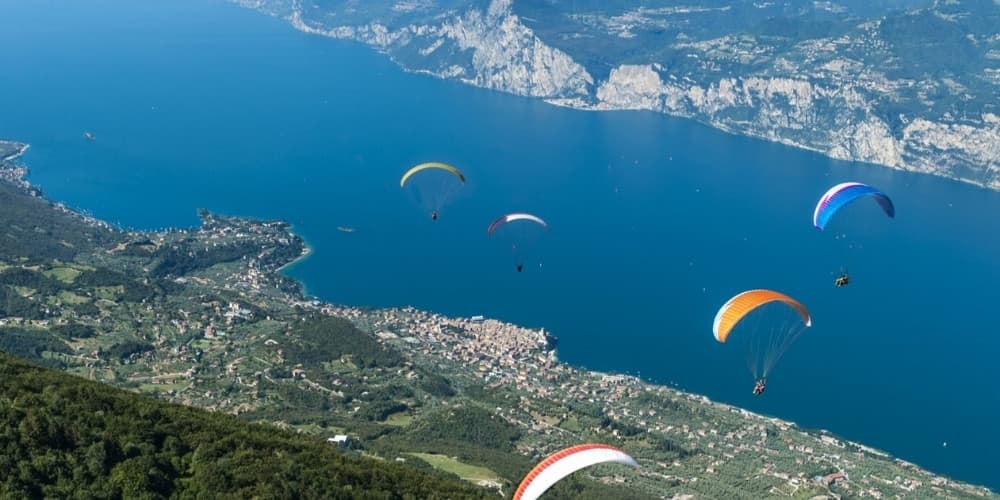 Among the things to see and do in Malcesine, there is undoubtedly the Malcesine - Monte Baldo cable car. After exploring the village and the lakeside, change perspective and take the cable car to Monte Baldo for an extraordinary spectacle from above. Monte Baldo, also known as the 'Garden of Europe', offers a unique ecosystem, from the Mediterranean to alpine flora, the presence of several endemic species, and sheer views of Lake Garda.

The cable car station is located in Malcesine, a few minutes walk from the centre. The cable car route has an intermediate stop at San Michele and then reaches the summit of Monte Baldo at 1780 metres.

San Michele can also be reached on foot via easy scenic routes along mule tracks and paths. Once at the top, you can take easy or strenuous walks, enjoy the views, eat some typical dishes in the restaurants and huts near the cable car station, and for the more daring.... try paragliding! 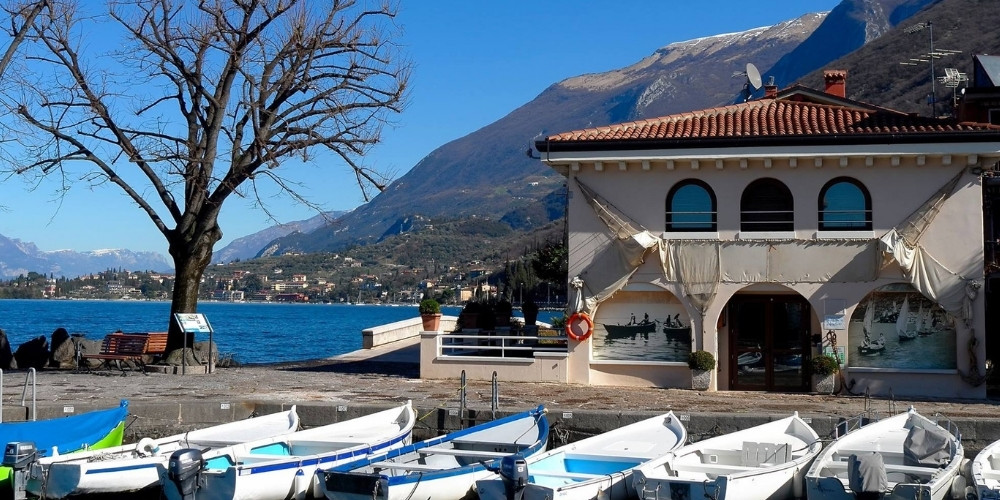 Cassone, a small hamlet of Malcesine, from which it is about 4 km away, welcomes us with its small bridges and alleyways, creating a romantic atmosphere.

The most characteristic attraction of this delightful hamlet, which can also be reached via the cycle/pedestrian path along the lake, is the perfectly preserved small harbour with its colourful fishing boats, the 'Toresela', an ancient tower facing the lake, and the Lake and Fishing Museum.

Cassone is famous because it is crossed by the Aril river, which, at 175 metres long, is the shortest river in Italy. The Aril, which along its course meets a waterfall and is crossed by three bridges, is certainly an element that adds charm to the landscape! Cassone's charm also inspired the Viennese painter Gustav Klimt, who painted two of his most famous paintings during a stay on Lake Garda: "The Church at Cassone" and 'Malcesine on Lake Garda'. 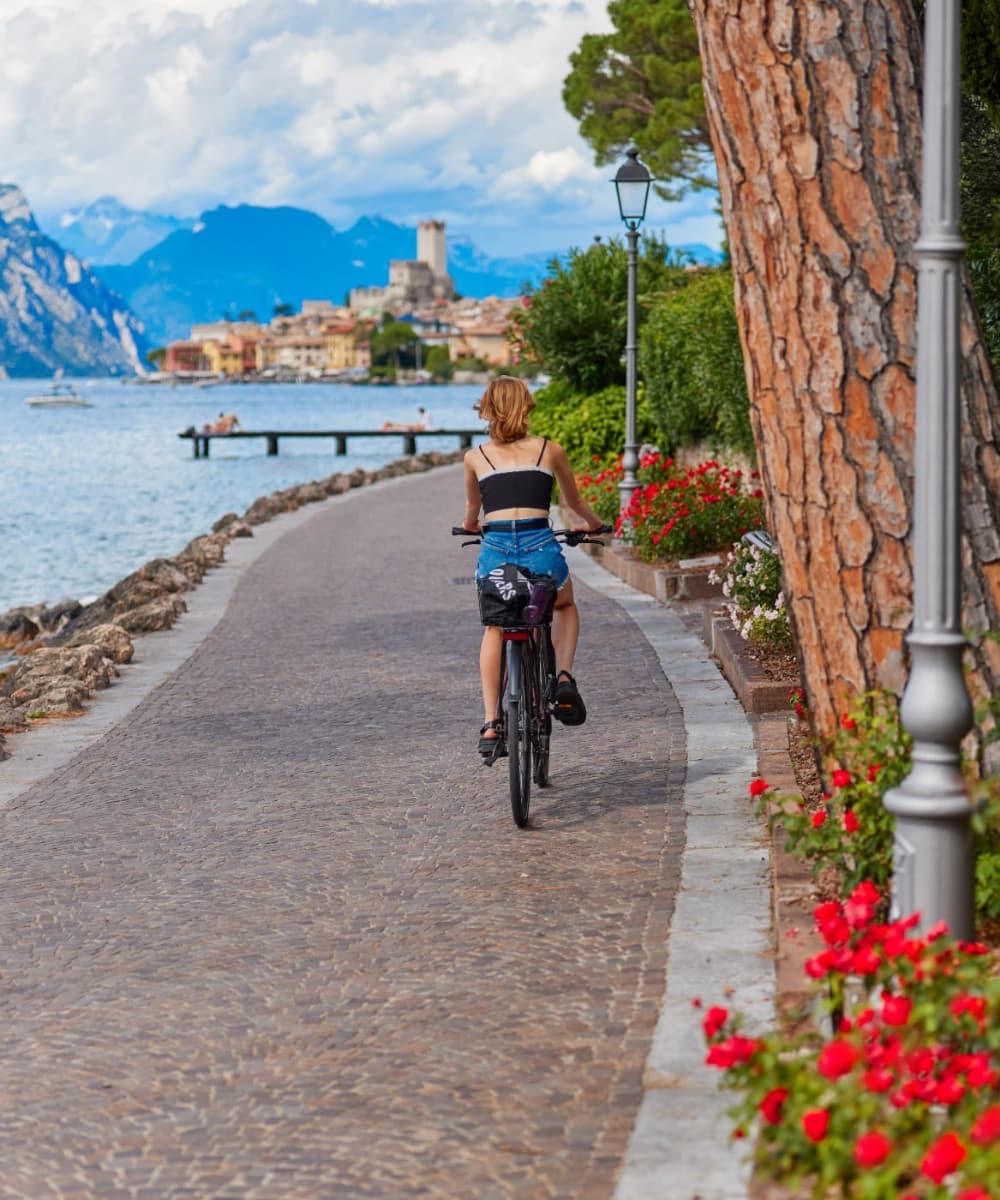 For those who love walking, Malcesine is an excellent base: in the town or in the surrounding area, there are routes of all levels, from relaxing walks to more challenging treks. One of the most popular routes is the scenic path that connects Tempesta and Busatte Park.
Tempesta is about 7 km from Malcesine while Busatte is further north, near Torbole. This route, which is suitable for everyone and also takes place on special steps, provides wonderful views of the Upper Garda.
Cycling enthusiasts will also have several alternatives: from mountain bike trails on Monte Baldo to relaxing coastal cycling routes. In summer, the Malcesine - Monte Baldo cable car provides access to the peaks of Monte Baldo, from where challenging routes for the well-trained and medium-easy routes lead to the lakeshore, circumventing the Monte Baldo mountain range from the east. For relaxing, safe and affordable cycling for everyone, there is the lakeside cycle path!
Malcesine awaits you for an unforgettable journey and experience between lake and mountain!