Apulia: the most beautiful baroque churches in Lecce

Lecce is often defined as the Capital of Baroque. An artistic trend the was born in Rome in the 17th century, spread in Spain, then returned to southern Italy through Naples. In Lecce it takes on such special characteristics that we have to talk about Lecce Baroque. It is present in most buldings of historic centre, but in churches it reaches its peak.

Located in Piazza Duomo, one of the few examples of a closed square in Italy, the Cathedral of Santa Maria dell'Assunta is perhaps the most characteristic view of Lecce. Born for replacing the pre-existing medieval church, the Cathedral was completed in 1670 by the architect Giuseppe Zimbalo. What you immediately notice is that the sumptuous facade from which you enter the interior is actually on a side wall of the church. The real main entrance is hidden from the view of those who enter the square. But the baroque conception of art and its horror vacui (fear of empty), could not allow to receive the faithful through a bare wall. So it was created this highly decorated “theatrical frame”, rich in statues, capitals and friezes. The adjacent bell tower, 70 meters high and built on 5 floors, is one of the most recognizable symbols of the city. 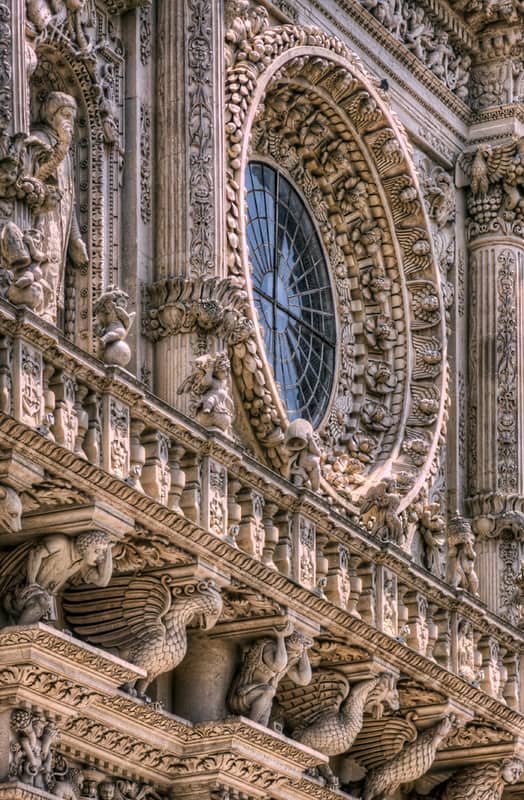 The Basilica of Santa Croce is undoubtedly the flagship of the Lecce Baroque. The history of its construction is three centuries long and its total cost is almost incalculable. In the 14th century a monastery was already founded (which today is the palace of the Province), so it was decided to add a new church. In 1510 the Jews who occupied the area were driven out to make way for the construction. The interior of the curch houses the relics of the Cross (to which the basilica is dedicated) and houses some of the most beautiful altars in Apulia. Like the one dedicated to San Francesco da Paola and the one dedicated to Sant'Oronzo, with one of the oldest inscriptions in Salento dialect. The facade is an heady sight for the eyes. Statues, mythological animals, anthropomorphic figures and plant decorations occupy and enliven the entire surface. After the long restoration just completed, you can finally discover some hidden secrets. Among the leaves that adorn the large rose window, for example, on the left you can search the profile of one of the main architects who worked on the project, Cesare Penna. 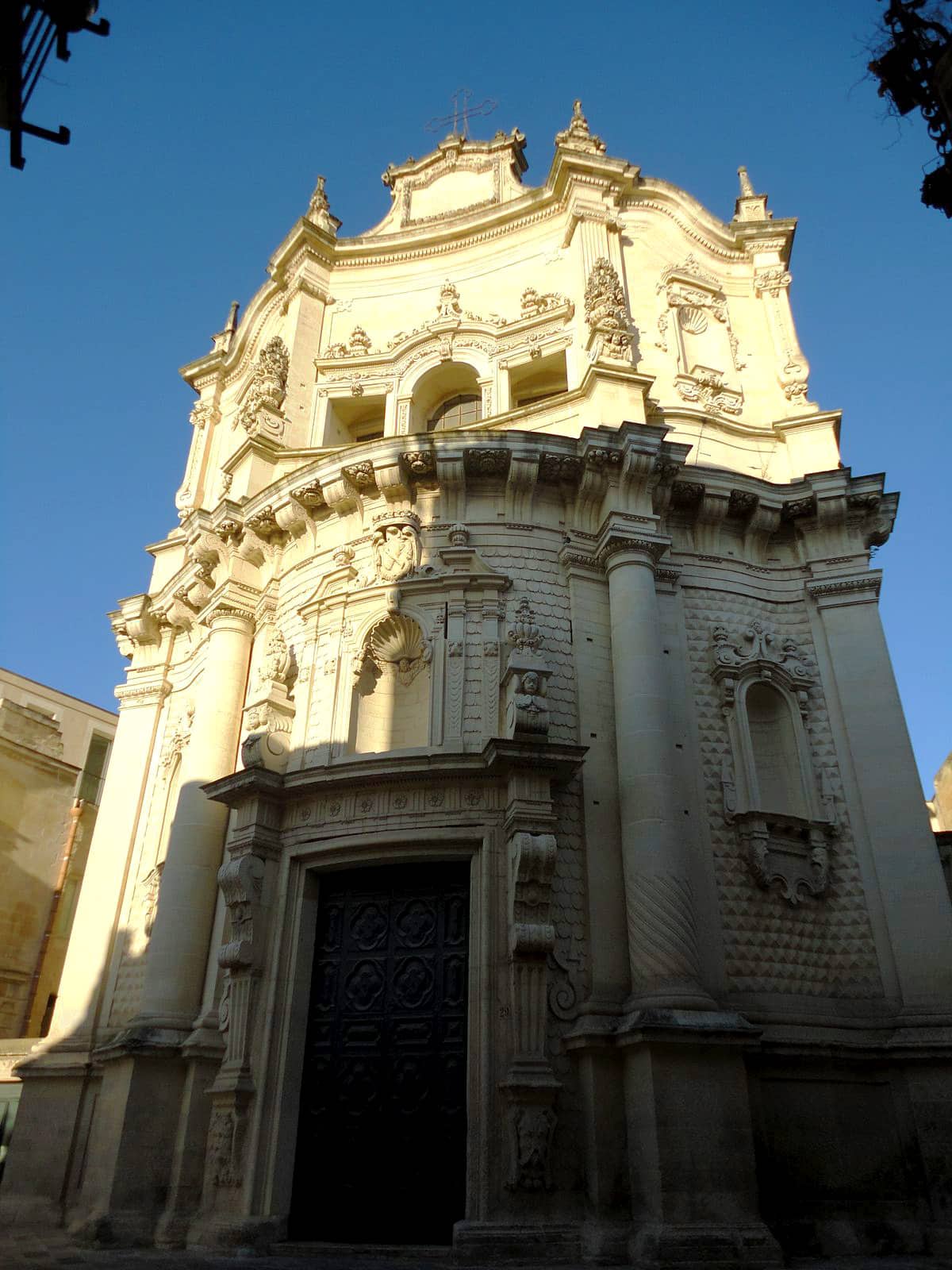 The baroque churches of Lecce are really many and, among the less known, that of Saint Matthew deserves attention. The exterior in fact has a unique particularity, that is a play of curved lines between solids and voids. It is enough to observe the facade, it is subdivided on two orders. The upper one follows a concave course and the lower one on the contrary is convex. At the same time the surfaces at the lower level are enlivened with a decoration "in scales" or diamond tip, while they are smoother in the upper order. The church is located along a rather narrow street in the historic center, so it is not visible from great distances. This forces us to observe it very closely, with a view from the bottom, which greatly amplifies the grandeur of the building and its curvilinear games. 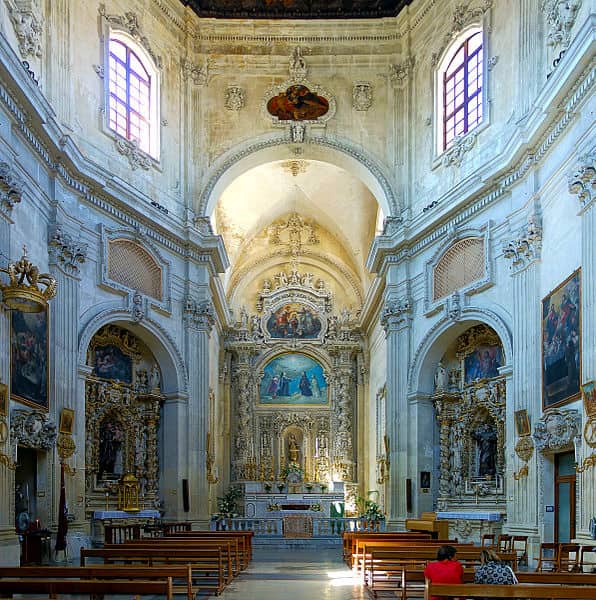 In Piazza Santa Chiara, one of the heart of Lecce’s nightlife in the historic center, stands the Church of Santa Chiara. At first glance the facade will give the impression of observing the umpteenth Baroque building of Lecce, full of decorations, columns, pilasters and with the classic colors of Lecce stone. Even the octagonal interior, rich in sumptuous altars with twisted columns and golden leaves will recall several others. But here every church has its hidden gem. Already observing the top from the outside it is noted that the building seems unfinished, almost completely truncated. The real motivation is that the ceiling is made entirely of papier-mâché. Lecce boasts in fact an ancient tradition of papier-mâché masters, still in great activity and that already since 16th century were summoned to England. The fragility of the ceiling therefore does not allow further elevation of the church and requires constant maintenance.

Before St. Oronzo, as tradition says, protected the inhabitants of Lecce from the plague of the '600, the patron saint of the city was St. Irene. It is clearly read also on the facade of what was once the most important church in the city. It is inspired by the Basilica of Sant'Andrea della Valle in Rome, because the architect was the same, Francesco Grimaldi. Attached to the building is the monastery of the Teatini, in whose beautiful cloister nowaday there are markets. The interior is a true art gallery, with exceptional paintings by artists such as Antonio Verrio, one of the greatest Lecce painters of the Baroque period, very active in the courts of France and England.