Archaeological secrets in the shape of Italian Squares

The square is the heart of every Italian city. In the Middle Ages and the Renaissance, many are created according to very original projects. But some squares hide secrets in their own structure and their own name. Their form is shaped directly on the oldest buildings or on the pre-existing spaces, still preserved below. We literally walk over history, but often we do not notice it.

Piazza dell'Anfiteatro in Lucca is the clearest example of this phenomenon. Its name is anything but casual and in fact it rises just above the Roman amphitheater of the II century A.D. It begins to play a function of square in medieval times, when it was called Parlascio, derived from the Latin "paralisium", that means precisely "amphitheater". Over the centuries the area was occupied by many buildings used as warehouses and then demolished in ‘800 to redevelop the zone. Just look at the square from above to realize how exactly follows the shape of the ancient building. The open space corresponds to the arena, while the current buildings are arranged around following the course of the bleachers. Via dell'anfiteatro (Amphitheater rue) finally surrounds the entire area retracing the elliptical profile. 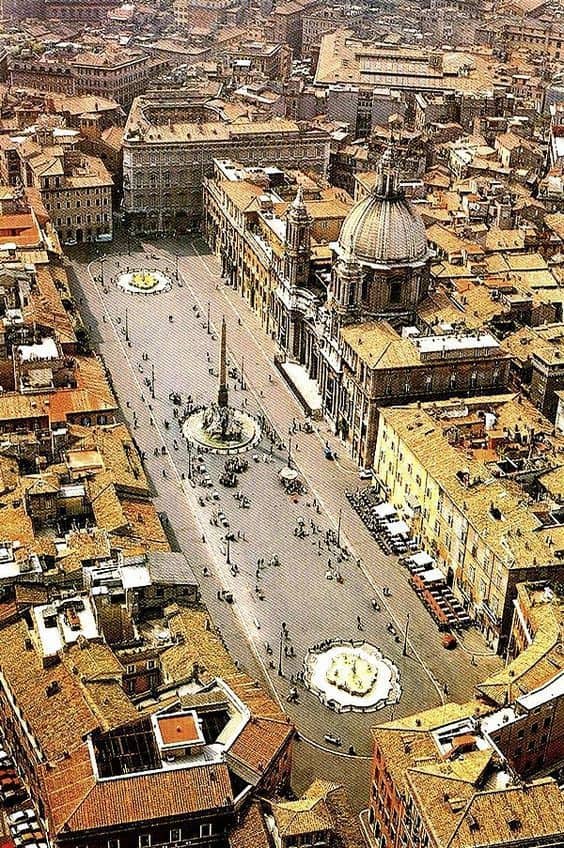 Piazza Navona in Rome is a symbol of Italian art and architecture in the world. It is a great example of the Baroque, famous for Bernini’s masterpieces and its historical buildings. it also hides a secret in its name and shape. Its profile is elliptical, with a large open space surrounded by buildings on all sides. If it remembers the structure of a stadium it is precisely because in ancient times it was it! The Domitian Stadium, built at the behest of the emperor in 85 A.D. Here took place athletic competitions, called in ancient Greek Agones. For this reason the place was initially called In Agone, then became In Nagonis and finally Navona. Trace remains of the toponym also in S. Agnese in Agone, a seventeenth-century church overlooking the square. The remains of the ancient stadium are still well preserved under modern buildings. The same happens in Lecce, where the buildings of Piazza Sant'Oronzo are arranged on curved lines around the central space. But in this case the underlying amphitheatre is clearly visible, as it was partially dug. While the wonderful Piazza Duomo, overlooked by the Cathedral of Santa Maria Assunta, has a much more particular history. It is one of the few examples of "closed square". Access is only possible through a single passage, which once remained closed at night. The quadrangular plan takes exactly the course of the previous structure: the court of a small fortified citadel. The buildings, including the twin palaces, the Seminary and the Episcope, trace the course of the ancient walls. The high baroque bell tower probably rises at the same point as an old watchtower. This means that even the function of spaces is often respected over time.

Prato della Valle is the largest square in Padova. With its surface it is also one of the largest in Europe. The construction dates back to the eighteenth century, following a project to redevelop the area. The place has in fact undergone several transformations over the centuries. In Roman times it was the Campus Martius (“Mars’ field”, from Mars, god of war), that was a rural space used for military gatherings. In the Middle Ages it became an abandoned area oftes affected by flooding. At that point the name "Valle" (valley) appeared, with the meaning of low and marshy area. When the city flourished again in the 11th century, this zone was recovered and destined for markets. Pratum was the term used to indicate the commercial space. This explains why such an elegant square retains the name of Prato della Valle (“Valley’s lawn”).

Piazza del Campo in Siena is one of the most beautiful and famous squares in Italy. Many know it for the famous Palio di Siena. Its history is very to the one of Prato della Valle in Padova. In fact, even this place was once a marshy land, called Campus Fori, from which "Campo" (field). And also in this case it was used for the market, mostly cattle and wheat. The shape of the square derives precisely from the disposition that merchants assumed around the open space, a practice that continued for centuries. Over time, the urban redevelopment made sure that the buildings facing the square assumed the same semicircle profile. The characteristic pavement reminiscent of a shell, made in medieval times, makes it a unique place in the world.