UNESCO: The Sassi and the Park of the Rupestrian Churches of Matera

A group of houses, churches, monasteries and chapels were built into the natural grottos of Murgia, a limestone plateau characterized by deep cracks, ravines, rocks and caverns. These are the characteristics and aspects that have made the Sassi and the Park of the Rupestrian Churches of Matera UNESCO World Heritage Site.

The UNESCO Value in Matera

Matera is an ancient city excavated and constructed from the Murgia's rock. Its origin is dated over 10,000 years ago and counted among the most ancient cities in the world.

Matera, the City of Sassi, has grown since prehistoric times as rock-dwelling, embracing and unusual type of houses: caves, where people have been constantly living all through the centuries in a perfect combination of man and nature. The old town is on the elevation, the so-called Civita, along with Sasso Barisano and Sasso Caveoso.

Matera took on its particular appearance as rock-dwelling in the Middle Ages. There are lots of rock churches therewith vestiges of Byzantines-influenced sacred art brought there by monks in the Middle Ages. The Sassi of Matera have been included in the World Heritage List for their historical, archaeological, artistic, natural and ethnographic heritage.

The Sassi of Matera: from its beginnings to the present day 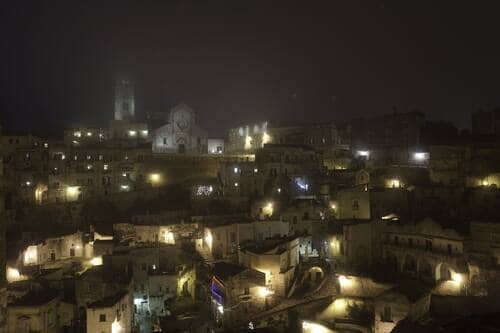 Into the crumbling rocks of the Lucana side of Murgia, people chose to live in caves to cope with the need to have a shelter and a home, to protect themselves from weather, to defend themselves from enemies or raiders. This is a perfect example of the way humans adapted to the natural environment because in this way they could make the most of the local geomorphology and space. Humans lived in extraordinary harmony with the wilderness and turned the natural caves into their homes.

The underground dwellings spread out unevenly, first scattered in groups, following the layers of soft calcarenite rock. Caves have a plain shape with one room, a rectangular layout and a valuated ceiling.

Over time, the prehistoric choice of living in a cave crystallised into Matera's distinctive form of dwelling, strong and unchangeable, of outstanding cultural and anthropological relevance. No two caves are alike, in size, development and aspect, they follow and cut into the shapes of Sassi and eventually become the backbone of the buildings that built on top, as settlements that develop both underground and above of ground.

In Matera, more than anywhere else in Italy, the houses merge and blur into the landscape. The houses and the ravines blend into each other, both structurally and in the materials. The walls, roofs, floors are made in the same rocks the underground rooms have been dug out of, so they look materially and chromatically colours in their shades of white and grey.

Matera's signature appearance plays like a labyrinth: a contrast of chaos and harmony. At least until the dawn of the Modern Age, the urban development of Matera did not follow any plane, nor any rational design. The houses at the Sassi were built to meet the local families' needs. Nevertheless, the result was outstandingly harmonious and sublime.

Medieval travellers who visited the town compared it to a star-studded sky. Today Matera with its Sassi has been able to win the heart of thousands of tourists and Hollywood movie directors. Into many Sassi now there are hotels and restaurants. The experience of sleep inside one of its Sassi is unforgettable and a must-have for the tourism of the city.

The Rupestrian Churches of Matera 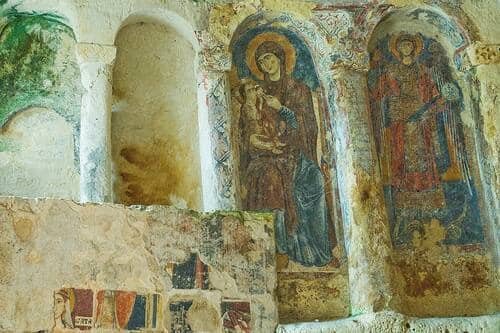 With its over 150 rock churches, often decorated with frescos or bas-relief, Matera is a repository of an outstanding wealth of sacred art that embodies all the historical and cultural seasons it has gone through. Indeed, the cave-dwelling tradition was adapted as places of worship too.

The first rock churches had been influenced by the medieval monastic culture since the VIII century when Benedectine monks settled in and around Matera, bringing with them the Latin iconography of monastic Christianity. In the Middle Ages, the town was run through by Byzantine-inspired religious cultures (IX-X century): hermits and anchorites fled the war in the East and found the perfect place in Matera's plateau for praying and living life in solitude. The monks dug cells, made reservoirs, turned the rocks into plain but very charming churches, their walls engraved with Greco-Oriental religious features.

The rock churches are in places of great importance that probably used to be already places of worship before the spread of Christianity. The most important and accessible are:

Santa Maria de Idris – San Giovanni in Monterrone: located inside the rocky spur Monterrone that overcomes the Sasso Caveoso, close to San Pietro Caveoso and the homonymous square. The location is amazing and offers a unique landscape on the city and the Gravina. The church dates back to the XIV century and is part of a rock complex that includes the oldest crypt dedicated to St. Giovanni in Monterrone too. The two churches are connected and inside the crypt are stored frescoes ranging from XII to XVII century. Santa Lucia delle Malve: it's close to the previous and it is the first female monastic settlement of the Benedictine Order, built in the VIII century and the most important for the history of Matera. The monastic complex's external front runs along the rocky wall through a group of access that goes in other internal cavities. Its interiors, on the top carved in relief, represent symbols of St. Lucia's martyrium. There are some of the most beautiful and important wall paintings in Matera.San Pietro Barisano: it's on the Sasso Barisano before called San Pietro de Veteribus. It's the biggest rock church in Matera. Its archaeological research has made it possible to identify the first rock installation, dating back to the XII-XIII century, under the floor. With a first enlargement, between the XV and XVI centuries, deepened the excavation of the church and built the lateral chapels. About these operations, only the terminal part of the chapel left. It sets behind the second altar in the right aisle with frescoes of St. Caterina of Alessandria, the Annunciation, St. Canio, St. Agostino, St. Eustachio and St. Vito.Madonna delle Virtù and San Nicola dei Greci: it's a rocky complex located at the foot of Civita, along the road that overlooks the Matera's Gravina. Here there are the Church of Madonna delle Virtù and the Crypt of San Nicola dei Greci. The Church of Madonna delle Virtù has three naves and architecture in romantic style with reliefs of fine workmanship. While in the Crypt of San Nicola dei Greci there are some of the most important visible paintings in the Matera's rock churches.

The churches form the Parco Regionale Archeologico Storico Naturale delle Chiese Rupestri del Materano or Parco della Murgia Materana. A fascinating land, apparently desolate but that in truth hides natural treasures and historical evidence of exceptional value. This park is unique for the important link between man and nature: it preserves at the same time the spectacular nature and the works made by the men during the centuries through the patient engraving work.