Best Things to do in Assisi, UNESCO World Heritage Site since 2000

Assisi is one of those places to visit once in a lifetime. The blend of art and spirituality makes the city of St. Francis a unique destination. And it is also a mouth-watering destination for good food lovers.

A city of art, a symbol of peace and a popular destination for pilgrims and tourists from all over the world, Assisi is a much-loved destination for both believers and nonbelievers, where an atmosphere of deep spirituality blends with exquisite architecture and a magnificent hilly landscape. You don’t have to be religious to appreciate the beauty and charm of this town in the heart of Umbria. In the words of Giosuè Carducci, “Assisi is a beautiful thing, country, city and sanctuary”. Famous for being St. Francis’s birthplace, its historic centre and the celebrated Basilica, home to some of Italy’s finest masterpieces, are the strengths of this Unesco-listed borgo nestled in the gentle plains of Umbria and overseen by the steep and wooded Mount Subasio. As evidenced by the numerous archaeological finds dating back to the Neolithic period, Assisi history is very ancient and intertwined with the legacy of its saints, Francis and Clare, and their message of peace and brotherhood.

Assisi is a beautiful thing, country, city and sanctuary

How to get to Assisi 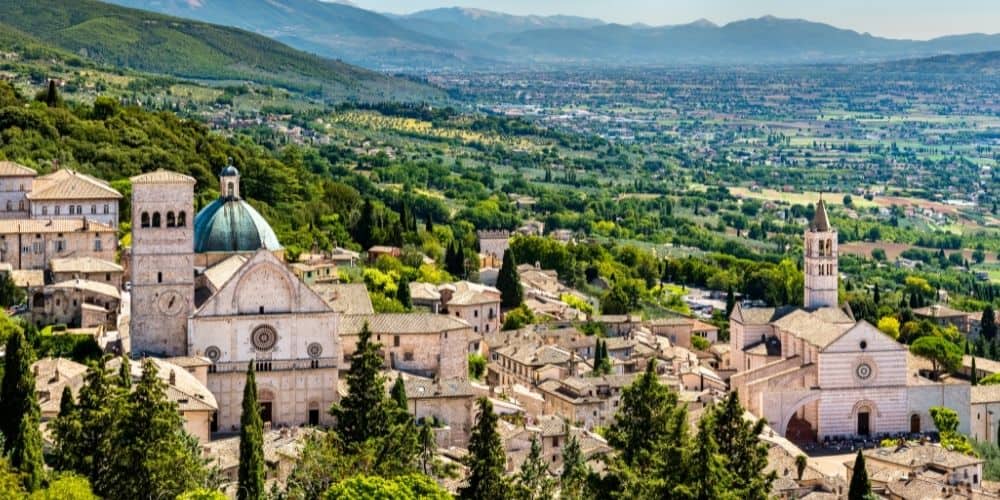 Assisi is a short distance from Perugia (about 26 kilometres). Even though you have little time, you can easily explore it on foot in one day. If you are planning to drive there, leave your vehicle in one of the car parks outside the city walls. For those arriving by train, the station is Santa Maria degli Angeli. Here you can catch a bus to the historic centre.

The Basilica di San Francesco is the real jewel of Assisi’s historic centre. Two churches form the 13th-century grandiose complex: the Gothic Basilica Superiore, featuring the famous cycle of Giotto depicting the life of St. Francis, and the older Basilica Inferiore, which preserves works by Cimabue, Pietro Lorenzetti and Simone Martini. The Basilica Superiore is the majestic Gothic building consecrated in 1253 that hosts the renowned 28 revolutionary frescoes realized by the young Tuscan artist. To admire them in the proper sequence, start on the right wall near the altar and go on in clockwise order. A double portal dating back to the second half of the 13th century leads to the Basilica Inferiore, an austere Romanesque structure realized between 1228 and 1230. The environment is dimly lit and reveals to visitors an architecture markedly different from the upper church. Its low vaults and chapels down the single nave feature frescoes by great masters of painting.

Many are the anecdotes and curiosities that will enrich your visit. On the square in front of the lower church, you will find the information office, where it is possible to pick up an audio guide that will virtually lead you on your tour, making your experience more complete and comprehensive. You can also schedule a guided tour led by a Franciscan friar. Always check the website or call ahead for booking details.

Things to do in Assisi in a day 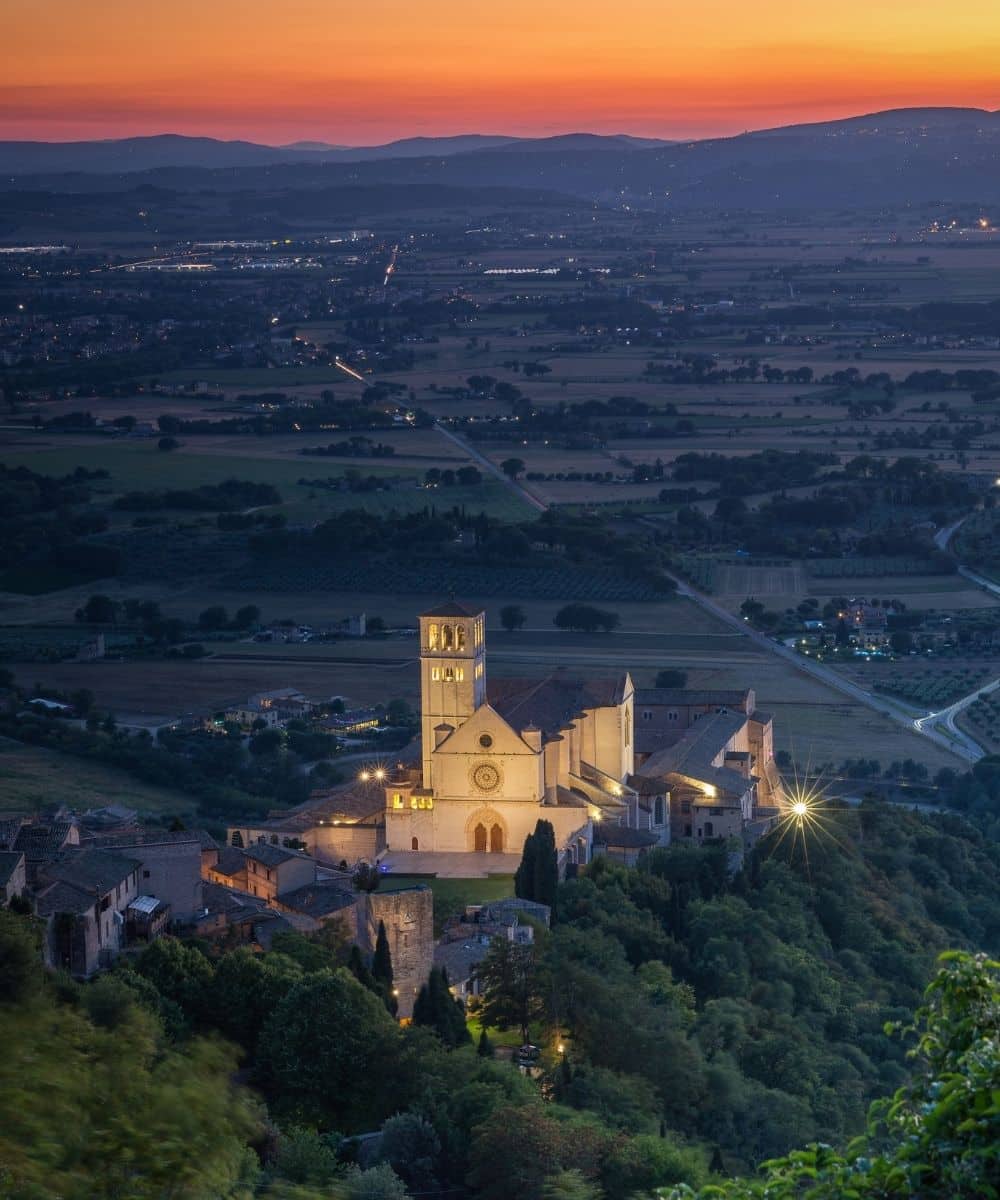 If you are short on time, here are a few suggestions to make the most out of your brief stay in Assisi and condense the must-see stages into a few hours. Are you ready? Let's get started! You cannot come to Assisi and avoid its most iconic attraction, the Basilica di San Francesco, which houses some of the most valuable and significant Italian artistic masterpieces. After the visit, walk along Via San Francesco to the small and charming Piazza del Comune, built on the ancient Roman forum. Here stand some of Assisi's most beautiful historic buildings: Palazzo del Capitano del Popolo, Palazzo dei Priori and the Temple of Minerva. The latter is undoubtedly one of the most intriguing landmarks of the town. Conceived as a site of worship of Hercules in the 1st century, it had been used as a home, prison, workshop and town hall before being turned into a church in 1500. Not far from the square, you will find two other places traditionally linked to Francis' childhood: the Chiesa Nuova, a 17th-century building constructed on the site of his father's house, and the Oratorio di San Francesco Piccolino, believed to be the birthplace of the saint. Art fans will appreciate a tour of Palazzo Vallemani, home to the Pinacoteca Comunale (Municipal Picture Gallery), which houses various medieval and Renaissance frescoes, including some works by Perugino and Giotto. Reach the 14th-century Basilica di Santa Chiara, dedicated to the founder of the Clarisse Order. It preserves the Byzantine crucifix that is said to have spoken to St Francis, entrusting him with his mission.

Arrived at this point, you may have got so fascinated by the unique and hard-to-define atmosphere in Assisi to spend another day in this pearl of Umbria and perhaps take a trip to the surrounding area. Drop in the city's oldest place of worship, the Cathedral of San Rufino, where St. Francis preached for the first time. Nearby are the remains of a Roman amphitheatre. Although a travertine arch is all that remains today, its former function is betrayed by the elliptical building layout and by the wall enclosing the arena, now a garden. Visit the Rocca Maggiore, an imposing fortress that dominates Assisi, and enjoy the unobstructed view of the Umbrian valley. Make a stop at the Basilica di Santa Maria degli Angeli in Porziuncola: it's about 4 kilometres from Assisi, and it is here that Francis founded the Franciscan Order. Inside is the Cappella del transito, where the saint spent the last days of his life. A place of reflection and prayer and the background of one of the most famous Franciscan anecdotes (the famous sermon to birds), the Eremo delle Carceri is swaddled in the woods of Mount Subasio. You can drive there or reach it in a one-hour trek. It is an exceptional place, but the large crowds of tourists make it almost impossible to enjoy the peace and tranquillity that used to distinguish it in the past: be smart and leave for your trip early in the morning.

Foods you need to try in Assisi 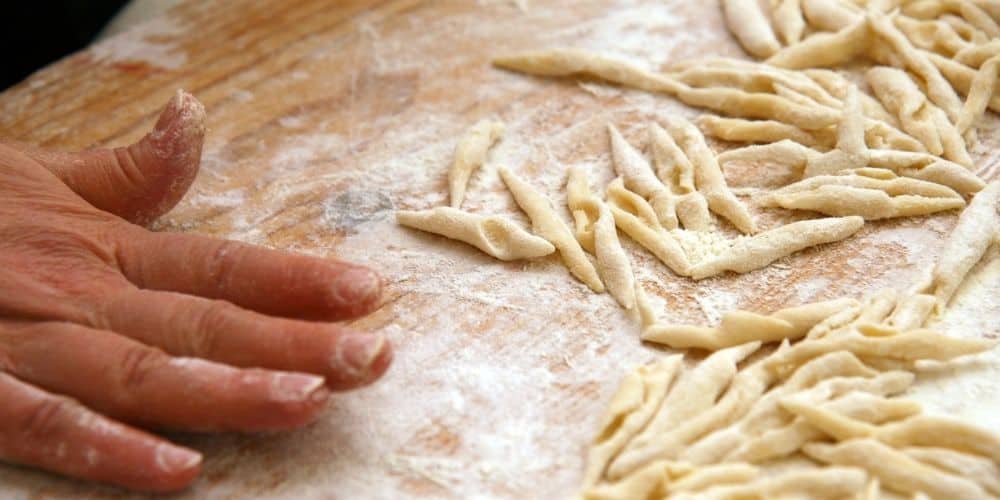 As the whole region, Assisi boasts a rich and renowned cooking tradition that attracts gourmets and gluttons. Here, food and wine mean, above all, making the most of local products used in a simple, hearty and genuine cuisine featuring a strong bond with the Umbrian country heritage. There are plenty of osterias, agritourisms and restaurants to stop at, but what should you order? First of all, since you are in Umbria, a "tagliere" (chopping board) of excellent local cold cuts and cheese is a must. Then, the first courses: umbricelli, strozzapreti and strangozzi, which are often served with truffles. And try spaghetti al rancetto, too. Spelt is one of Umbria's excellent products and can especially be found in the soups served in winter. The meats produced by local farms and game recipes are among the famous dishes to taste. Porchetta (roast suckling pig) is one of the best-known delicatessens of regional cuisine and a must on the tables in Assisi. As for desserts, try the rocciata di Assisi, pan nociato, ciaramicola and the pinoccate. Keep in mind that great olive oil is produced here (the DOP Assisi). Furthermore, you'll find five DOC wines: white, rosé, red, Grechetto and Novello.