Italy is the country with the largest number of UNESCO World Heritage Sites in the world and many of these sites are linked to the archaeological world, from prehistoric times to Magna Graecia, the Roman Empire and the early Christian tradition. Especially the Etruscan necropolis of Cerveteri and Tarquinia are interesting and spectacular examples of these wonders of the past: ancient treasures wai 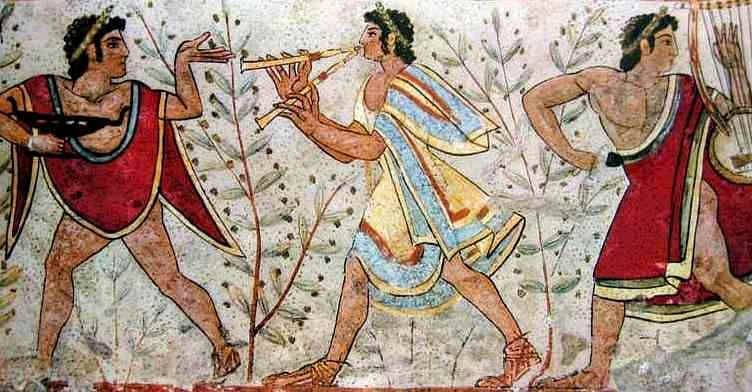 Towards the end of the 2nd millennium BC, in the area between Tiber and Apennines, there was a significant evolution in material culture that anthropology calls 'ethnogenesis', otherwise the identification of a set of customs and ideas that identifies a specific people from those nearby. The Etruscan ethnogenesis was the most spectacular one in the Peninsula because an exceptional developments: in fact, already towards the end of the 8th century it is possible to identify peoples with specific cultural aspects that can be called Etruscans. The Etruscan cities, right from their beginnings, presented original elements such as highly productive ecological niches in terms of agriculture that worked in perfect harmony with large urban agglomerations - especially along the coastal strip: this happy combination gave rise to high-level craft workshops, overseas import-export trade, exchanges of ideas with the East, temples and important elements of religious worship, evolved forms of government, refined elements of art, a form of writing derived from the Greek alphabet and wars, considered by the Etruscans to be one of the fundamental community activities. Concerning Etruscan power over the Mediterranean, we speak of a thalassocracy: in fact, many testimonies have come down to us about their skill on the sea and their many economic contacts.

Legend narrates that the ancient city of Tarquinia was founded by Tarchon, companion of the mythical hero Tyrrhenian, founder of the Etruscans: the splendid city achieved great development thanks to trade with Greece, but unfortunately today there isn’t much remains except for some parts of the walls and the necropolis. As far as the area of Cerveteri is concerned, the Banditaccia necropolis is certainly one of the most spectacular in Etruria, both for its enormous tumuli and the beauty of the burials.

And so, all the night-tide, I lie down by the side Of my darling—my darling—my life and my bride, In her sepulchre there by the sea— In her tomb by the sounding sea.

Visiting the necropolis of Tarquinia…

In east of Tarquinia there is a homonymous necropolis, consisting of about 6,000 burials, many of which are dug into the rock and topped by tumuli: the oldest date back to the seventh century BC. There are about 200 burials with frescoes in varying states of preservation: this treasure trove of images represents the most conspicuous nucleus of Etruscan art that has come down to us. The burial chambers are decorated with frescoes mainly of a magical-religious nature, such as funeral banquets, dancers, jugglers and aulos players, and had the dual purpose of reviving the pleasures of earthly life and consoling the loved ones for their loss. The most fascinating tombs are those of the Lionesses, the Warrior, the Flowers, the Bacchae, the Ogre and the Shields. 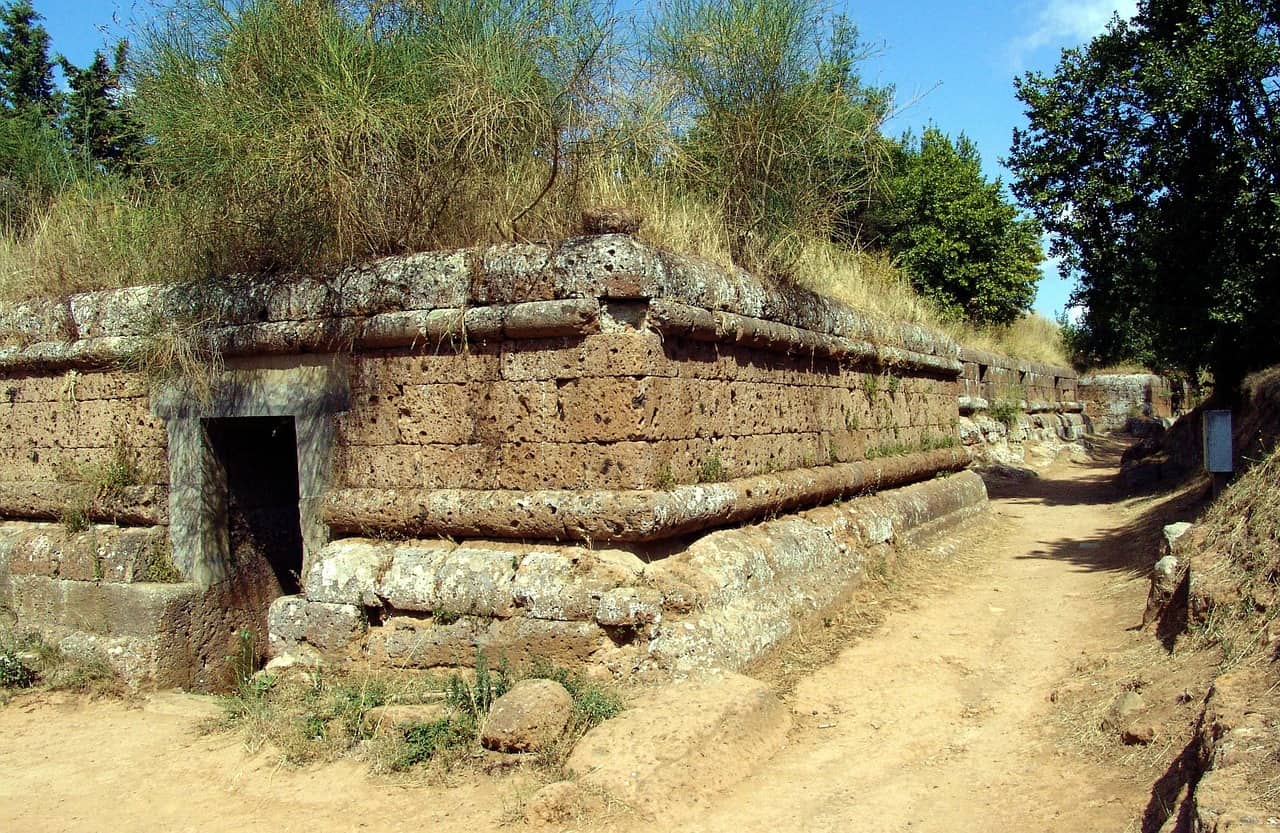 The Cerveteri area has several necropolises, the most famous of which is the Banditaccia, perched on a tufa cliff. Excavations in this area only began in 1909, as before that date only the sites of Tarquinia and Volsci had been excavated: at the end of the 1920s the archaeologist Raniero Mengarelli brought to light the main burial area called 'Via degli Inferi'. The originality of the Banditaccia necropolis is its composition, which resembles a real city of the dead with tacts of streets, squares and buildings. Unfortunately, the frescoes in this necropolis have not survived the passage of time, but the architecture of the tumuli still gives a strong visual impact.

In 2004, the Etruscan necropolis of Cerveteri and Tarquinia were inscribed on the UNESCO World Heritage List; its exceptional universal value was recognised thanks to the following criteria:

Criterion I: The necropolises of Tarquinia and Cerveteri are masterpieces of creative genius: Tarquinia's large-scale wall paintings are exceptional both for their formal qualities and for their content, which reveal aspects of life, death, and religious beliefs of the ancient Etruscans. Cerveteri shows in a funerary context the same town planning and architectural schemes used in an ancient city.

Criterion II: The two necropolises constitute a unique and exceptional testimony to the ancient Etruscan civilisation, the only urban type of civilisation in pre-Roman Italy. Moreover, the depiction of daily life in the frescoed tombs, many of which are replicas of Etruscan houses, is a unique testimony to this vanished culture.

Criterion III: Many of the tombs of Tarquinia and Cerveteri represent types of buildings which no longer exist in any other form. The cemeteries, replicas of Etruscan town planning schemes, are some of the earliest existing in the region. On 16 November 1972, the General Conference of UNESCO drew up a Convention on World Heritage intending to identify a list of sites of particular importance from a natural or cultural point of view. There are now 1153 such sites in 167 countries around the world, of which 896 are cultural heritage sites. Italy has 58 sites on the list, making it the country with the most heritage sites in the world. In addition to the necropolis of Tarquinia and Cerveteri, there are a large number of archaeological heritages in Italy, both from the prehistoric period and from the Roman and early Christian periods: here is a list of archaeological heritage, region by region.

Cross-border heritage. Prehistoric pile-dwelling sites around the Alps: there are 11 sites located in the Alpine arc and are found not only in Italy but also in Austria, France, Germany, Slovenia and Switzerland.

Val Camonica rock engravings: These are found in the province of Brescia and constitute one of the world's largest varieties of petroglyphs from prehistoric times.

Lazio. Villa Adriana: is an imperial residence located outside the ancient pomerium built by the emperor Hadrian.

Campania. Archaeological areas of Pompeii, Herculaneum and Torre Annunziata (Oplonti site): excavations in these areas have brought to light the remains of ancient Roman settlements destroyed during the eruption of Vesuvius in 79 AD.

Sardinia. Su Nuraxi: Nuragic village located in the area of Barumini dating back to the 15th century BC.

Sicily. Archaeological Area of Agrigento: the Valley of the Temples is an archaeological site famous all over the world for the perfect state of preservation of the Doric temples of the Hellenic period in Sicily.

Villa Romana del Casale: a late-antique residential building with the characteristics of urban palaces from the imperial era.