The Prosecco Hills of Conegliano and Valdobbiadene: UNESCO World Heritage Site since 2019

Let's discover together a magical place, which Unesco has recognised as a cultural landscape of extraordinary value.

In 2019, the site Le Colline del Prosecco di Conegliano Valdobbiadene, located in north-eastern Italy, was inscribed on the UNESCO’s World Heritage List, becoming the 55th Italian site on the list. By virtue of the cohesiveness and the dedication of the different territorial actors, the aim was achieved after a nomination process that lasted ten years.

The winegrowing landscape of Le Colline del Prosecco di Conegliano Valdobbiadene is the 8th site in Italy to be registered under the category of “cultural landscape”, since its mosaic appearance is the result of the interaction between humankind and its natural environment. 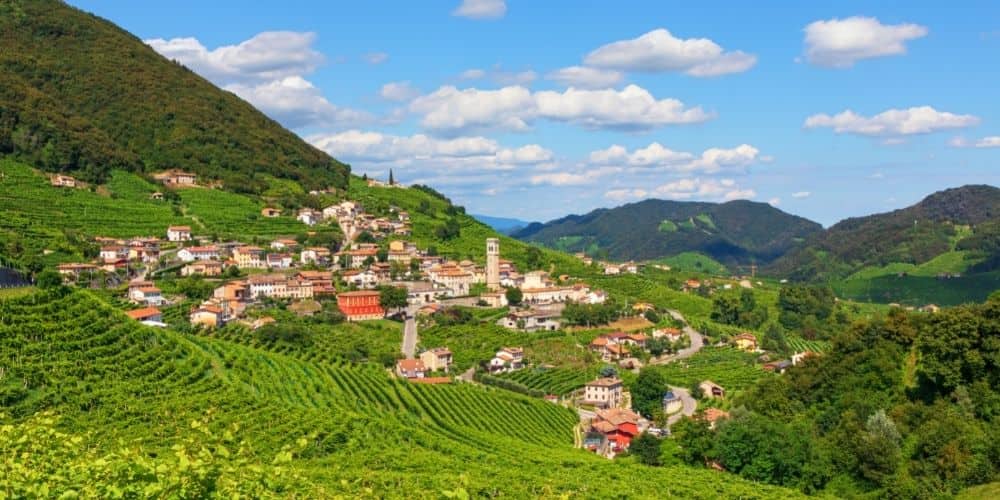 The Conegliano Valdobbiadene area is located in a hillside zone in the Pre-Alps area of the province of Treviso, 50 km north of Venice and approximately 100 km south of the Dolomites. In this area viticulture was, and still is, the prevalent activity and it has ancient origins: the first documented evidence that connects the Prosecco wine to this area dates back to 1772. The unique microclimate, the specific characteristics of the soil and the winemakers’ hand-crafted work are the reasons that, for centuries, have made this region ideal for growing vines.

The Prosecco Hills of Conegliano and Valdobbiadene are characterised by steep ridges whose slopes vineyards, planted on narrow grassy terraces called ciglioni, cover almost completely. This mosaic of woods, villages and vineyards create a spectacular and unique landscape. The ability of man allowed the territory to develop. Man and environment coexist and affect each other: winemakers have shaped this area without altering the geomorphological characteristics of the ridges, the biodiversity and the architectural aspects, whereas the steep slopes have obliged winemakers to grow vines in a “heroic” and hard way. 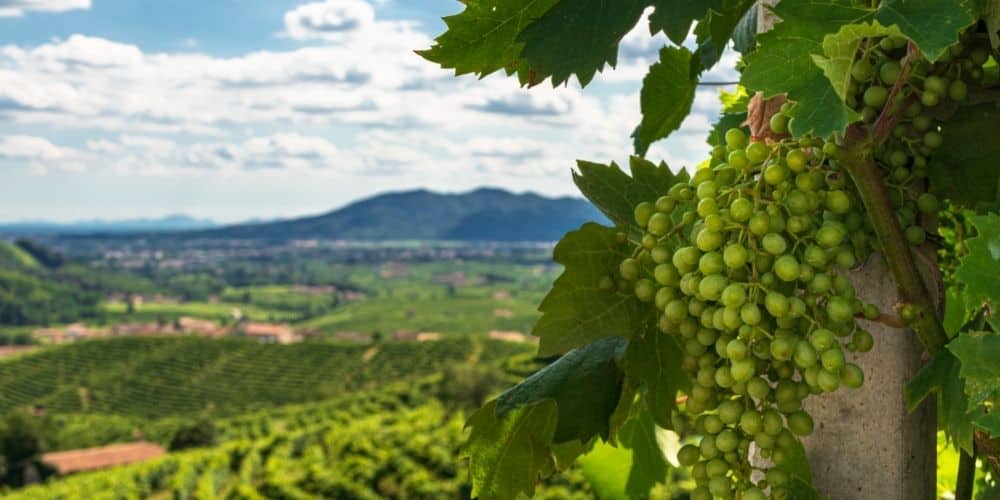 Prosecco is an Italian white wine with fruity and floral fragrances, characterised by a bright straw yellow colour and a smooth and elegant taste. Its story begins in Conegliano Valdobbiadene, a hilly area located in the North-East of Italy. Here, for over three centuries, winemakers have been cultivating the grapes from which the Prosecco Superiore is produced. The production area, which comprehends fifteen municipalities and represents the heart of the Prosecco world, is an Italian historic denomination recognised in 1969.

Prosecco can exclusively be produced in the North-East Italy, in the Veneto region (excluded the provinces of Rovigo and Verona) and in Friuli Venezia Giulia. The Prosecco produced in Conegliano Valdobbiadene is denominated Conegliano Valdobbiadene Prosecco Superiore DOCG, Denominazione di Origine Controllata e Garantita (controlled and guaranteed designation of origin), the highest level of quality for Italian wines. 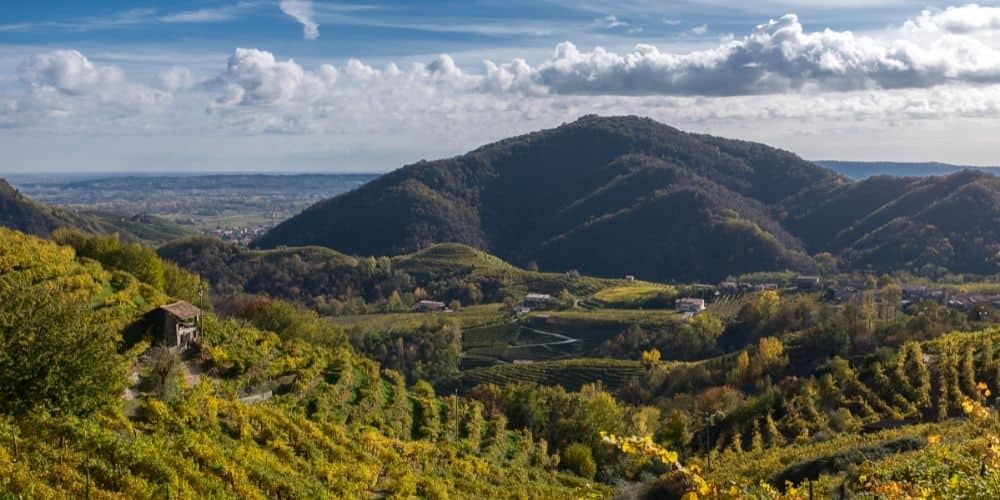 The site is a homogenous geomorphological system and this typical feature has influenced all the other aspects of the territory. Indeed, the site represents the result of an adaptation process of humankind to a fragile and complex environment in which a cultural landscape, mainly characterized by vineyards, has been created over time.

The nominated property includes the municipal territories of Valdobbiadene, Vidor, Miane, Farra di Soligo, Pieve di Soligo, Follina, Cison di Valmarino, Refrontolo, San Pietro di Feletto, Revine Lago, Tarzo, and Vittorio Veneto and covers an area of 9.197,45 hectares. They identified this area as the nominated property since it represents all the features of the rural landscape on which the nomination was based. Its main attributes are the hogback landscape, the highly adaptive agrarian landscape and the unique landscape mosaic. 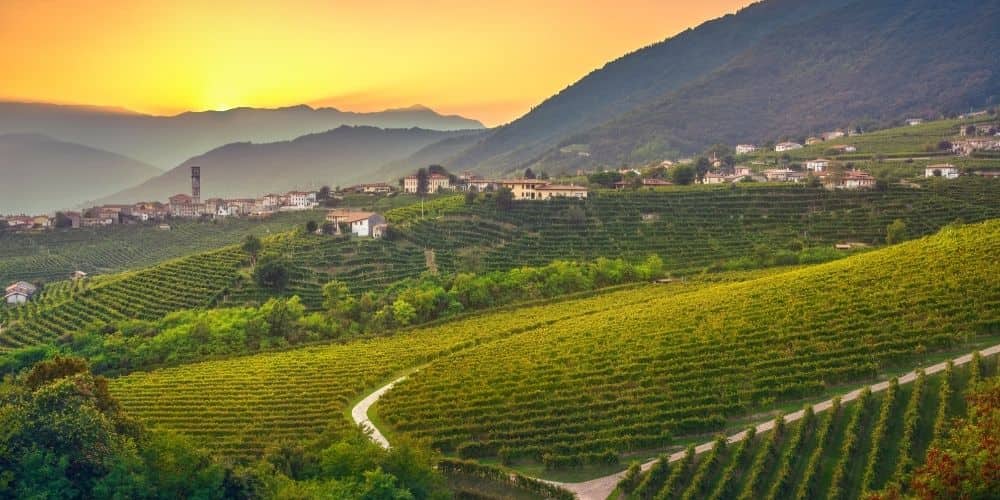 In 2019, the site Le Colline del Prosecco di Conegliano e Valdobbiadene, located in north-eastern Italy, was inscribed on the UNESCO’s World Heritage List under the category “cultural landscape”, becoming the 55th Italian site on the list.

The inclusion on the Unesco list is motivated by one criterion: (v) the Colline del Prosecco di Conegliano e Valdobbiadene is a viticulture landscape resulting from the interaction of nature and people over several centuries. The adaptation and transformation of the challenging terrain of the hogback geomorphology has required the development of specific land use practices, including: vineyard management by hand on steep slopes; the grassy terraces known as ciglioni, which follow the contours of the land, stabilising the soils and vineyards; and the bellussera training system which was developed in the area about 1880. As a result, the vineyards contribute to a distinctive ‘chequerboard’ appearance with perpendicular rows of high vines, interspersed with rural settlements, forests and small woods. Despite many changes, the history of sharecropping in this area is also reflected in the landscape patterns.