The historical centre of San Gimignano was declared a World Heritage Site by Unesco in 1990 because it perfectly preserves many architectural and artistic Italian masterpieces from the XIV and XV centuries.

"[...] In a place like this you really feel at the heart of things, and off the beaten track. Every morning I look out of a gothic window and it seems impossible to me that the Middle Ages have passed."

The historical centre of San Gimignano (known as the city of beautiful towers) was declared a UNESCO World Heritage Site in December 1990 in Banff, Alberta (Canada), because it has preserved its authentic medieval structure in terms of both architecture and urban planning. 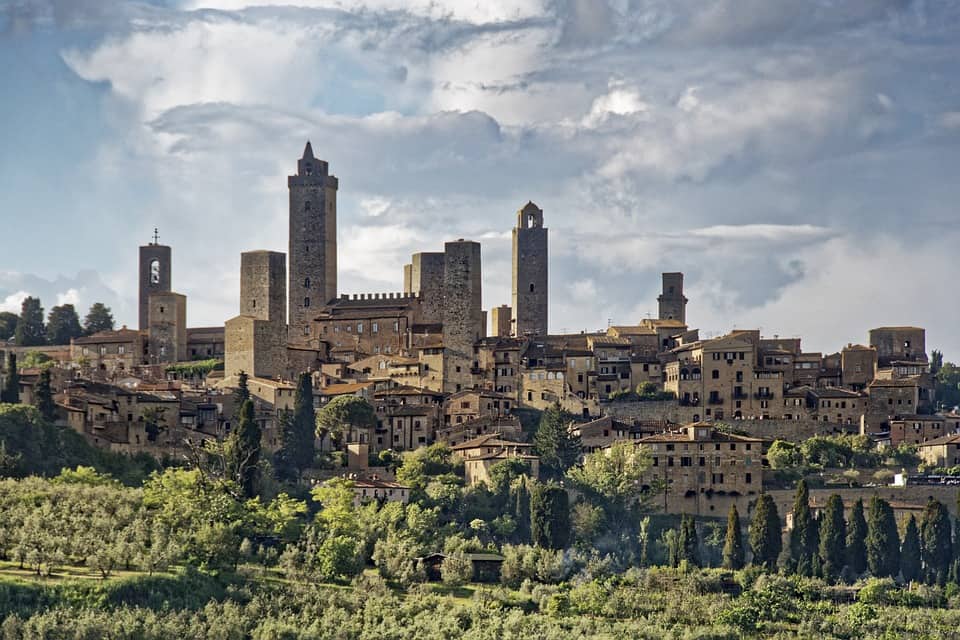 San Gimignano is in Tuscany, 56 km south of Florence, in the northern tip of the province/district of Siena.

The epithet "delle belle torri" (of the beautiful towers) is linked to the 14 noble towers that remained, which in ancient times were 72. They belonged to the aristocratic families of the upper-middle class who controlled the city as a symbol of wealth and power. Although only a few remain, the towers have kept their authenticity, rising in an urban context of beautiful palaces, with large sculptures and frescoes, cultural assets dating from the 14th and 15th centuries.
San Gimignano was an important stop for pilgrims traveling to and from Rome along the Via Francigena (especially for those leaving from France). The small town was the point of contention between Guelphs and Ghibellines and remained a free city until 1354 when it came under the control of Florence, living in the shadow of the powerful republic. Famine and pestilence reduced the population, transforming San Gimignano into a simple rural land of the Medici Grand Duchy.

The historical centre of San Gimignano was declared a World Heritage Site by Unesco in 1990 and also considered a cultural asset of exceptional value because:

Criterion I: it represents a masterpiece of man's creative genius. In addition to the original urban structure, which has remained largely intact, there are works of art of immense value such as the fresco of the Last Judgement by Taddeo di Bartolo (1393) in the Collegiate, the Martyrdom of St Sebastian by Benozzo Gozzoli (1465) and above all the magnificent frescoes by Domenico Ghirlandaio (the Santa Fina cycle, 1475).
Criterion III: San Gimignano describes with its buildings the modus vivendi of medieval civilization as it encloses in a limited area all the typical structures of urban life, i.e., squares, tower-houses, fountains, and wells. There are frescoes by Memmo di Filippuccio in the rooms of the Podestà in the Palazzo del Popolo which describe the domestic sphere of life in the 14th century.
Criterion IV: San Gimignano is an extraordinary example of a building category and landscape illustrating one or more phases of human history; in San Gimignano, the 14 remaining towers of the ancient 72 (the fortification dates back to 998) preserve and celebrate that aspect of a Tuscan feudal town, controlled by rival factions always ready for conflict. This peculiarity is absent in other similar and neighboring cities such as Siena, Florence, and Bologna despite the extraordinary monuments they have. The towers, symbols of San Gimignano, preserve their original appearance and relate to stories and moments in the life of the city during middle age. The Torre Grossa is the tallest tower in the city, measuring 54 meters. It stands in Piazza del Duomo, next to the Palazzo Comunale, and is one of the few that can be visited. The works began in 1300 when the Borgo hosted Dante Alighieri and was completed eleven years later. It is still one of the best-preserved towers. The Torre Rognosa, also known as the Torre dell'Orologio (Clock Tower), is one of the tallest towers in the village. It is among the best-preserved and it stands in Piazza del Duomo. It gets its name from the fact that, after the transfer of the Podestà, the prison was located there, which is why it was frequented by those who had rogne (meaning trouble in Italian). It was built in 1200 and it was owned first by the Gregori family and then by the Oti family. The Devil's Tower is perhaps one of the most famous towers in the village. It is part of the Palazzo dei Cortesi and legend has it that the owner found, after returning from a long journey, the tower taller than when he left. From here the tower was considered to be a work of the Devil and took its characteristic name. The structure of the tower gives it a sinister and esoteric appearance and it is distinguished from the other structures by the use of white limestone. The other towers are Torre Chigi, Torre dei Becci, Torre Cugnanesi, Torre degli Ardinghelli and Torre dei Salvucci. The latter are twin towers that belonged to the most important Guelph family in the city. The Salvucci were enemies of the Ardinghelli, a Ghibelline family who built twin towers too in imitation of the Salvucci's on the opposite side of the square. The towers were almost fifty-two meters high. However, the village authorities decided to have them lowered and today they are half their original height.