The Archaeological Area of Agrigento in Sicily: the Valley of the Temples, a Unesco Site since 1997

Since 1997, the Archaeological site of Agrigento, known as the Valley of the Temples is World Tangible Heritage.

Founded as a Greek colony in the 6th century B.C. Agrigento (Akragas, then called Girgenti until 1927), became one of the leading cities in the Mediterranean world. The archaeological site known as the Valley of the Temples, covers the area from the ancient polis of Rupe Atenea to the acropolis, from the Doric temples to the necropolis out of the walls.

The inscription in the World tangible Heritage list happened in December 1997 during the 21st meeting of the Unesco. The Committee decided to inscribe this site on the basis of criteria (i), (ii), (iii), and (iv), considering that Agrigento was one of the greatest cities of the ancient Mediterranean world and it has been preserved in an exceptionally intact condition. Its great row of Doric temples is one of the most outstanding monuments of Greek art and culture. This Greek colony became an important city both for trade and culture and there in 495 B.C the philosopher Empedocle born.

Selected excavated areas throw light on the later Hellenistic and Roman town and the burial practices of its early Christian inhabitants.
The criteria are: (I)The great row of Doric temples is one of the most outstanding monuments of Greek art and culture.(ii)The archaeological area of Agrigento exhibits an important interchange of human values, being undoubtedly one of the leading cities in the Mediterranean region with its outstanding evidence of Greek influence.(iii)As one of the greatest cities of the ancient Mediterranean region, Agrigento is an extraordinary testament of Greek civilization in its exceptionally preserved condition.(iv)The temples in the area exemplify Greek architecture and are among the most extraordinary representations of Doric architecture in the world

The Valley of the Temples 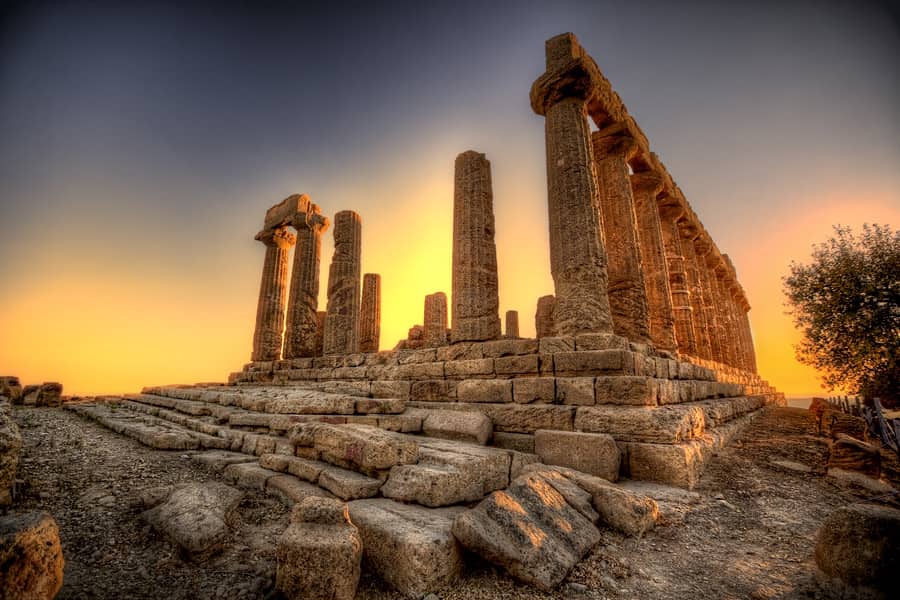 The Valley of the Temples is home to temples dedicated to the gods and goddesses, as well as the necropolis and the sanctuaries outside the town; there are seven temples and one funerary monument, the Tomb of Theron.
The Temple of Concordia is along Via Sacra and was also built around the 5th century. It is the only one to remain relatively intact; the temple got its name from a Latin inscription found near the temple. The Temple of Juno was erected in the 5th century BC in the highest point in the valley; the Greeks here celebrated marriages after.The Temple of Heracles (Hercules) was the first temple built and it was dedicated to Hercules, the hero of Sicily and Agrigento in particular; the temple was destroyed by an earthquake and now only 8 columns remain. The Temple of Zeus (Jupiter) is distinguished by its telamons, giant human figures, used between each column to support the building. The Temple of twins Castor and Pollux (Dioscuri) is now the symbol of Agrigento and has only four remaining columns. The Temple of Vulcan is very little and traces of an earlier temple have been found beneath its foundations. The Temple of Asclepius (Esculapius) was built far from the city walls and was a place visited by sick pilgrims hoping to be cured.