The Val di Noto is a must-see if you want to visit Sicily and comprises eight towns in the southeast of the island destroyed by an earthquake and rebuilt in the late Baroque style as if they were works of art. The site, which is on the UNESCO World Heritage List, includes, in addition to Noto, Caltagirone, Catania, Militello Val di Catania, Modica, Palazzolo Acreide, Ragusa and Scicli.

All of them must have had a great arrogance, a great pride, a high sense of self, of themselves as individuals and of themselves as a community, if immediately after the earthquake they wanted to and were able to miraculously rebuild those cities, with those topographies, with those baroque architectures: scenographic, bold, dazzling realisations of dreams, realisations of fantastic utopias.

It is 1693 and the earth begins to shake so strongly that it razes entire towns in south-eastern Sicily to the ground and makes centuries of history disappear in a short space of time. It is incredible how one of the most tragic events in Italy can be the source of an artistic masterpiece listed as a UNESCO World Heritage Site in 2002. Where there was only rubble left, there arose cities conceived and built as a hymn to art, built in the late Baroque style, places that still enchant visitors with their charm.

Was it really pride? Or that special gift Italians have of bringing Beauty to life? What is sure is that here, a perfect balance between the colours of Sicily, the sinuosity of the landscape, and the refined architectural decorations has made many people, including celebrities and movie directors, fall in love. This is where the famous Italian couple of influencer Chiara Ferragni and rapper Fedez celebrated their wedding, and where several episodes of the series "Inspector Montalbano", a character created by the great writer Andrea Camilleri, were filmed.

The Val di Noto extends from the hills to the sea, in an area that is never the same, where everyone can find a view that will remain in their hearts forever.

Most of them were rebuilt on their original site (such as Catania), some in other areas (such as Noto), for others a new urban centre was created next to the previous one (such as Ragusa and Palazzolo Acreide), others were restored (such as Caltagirone), and still others (such as Modica and Scicli) were rebuilt in nearby areas already partly urbanised.

It is this flowering of Baroque taste that was recognised as a UNESCO World Heritage Site in 2002 based on these four criteria, as we can read on the official UNESCO website:

1. The Late Baroque Towns of the Val di Noto in south-eastern Sicily provide outstanding testimony to the exuberant genius of late Baroque art and architecture.

2. The Late Baroque towns of the Val di Noto represent the culmination and final flowering of Baroque art in Europe.

3. The exceptional quality of the late Baroque art and architecture in the Val di Noto lies in its geographical and chronological homogeneity, and is the result of the 1693 earthquake in this region.

4. The eight Late Baroque Towns of the Val di Noto in south-eastern Sicily are characteristic of the settlement pattern and urban form of this region, are permanently at risk from earthquakes and eruptions of Mount Etna.

The UNESCO site covers these cities in different ways, including in some cases the entire historic centre (Noto, Caltagirone, and Ragusa) and in others more specific urban areas or individual monuments. All together these places represent one of the greatest expressions of late European Baroque in the world so that their style is called 'Val di Noto Baroque'. Each town here is different from the next because the choice of different materials gives the buildings a different colour, but they all share sumptuous palaces and churches with inlaid facades and embroidered interiors.

The eight must-see places to visit Sicily and enjoy all the beauty of Sicilian Baroque:

1. Noto: the capital of Sicilian Baroque

Just a short walk from the sea on a plateau overlooking the Asinaro valley, Noto has all the beauty of Sicilian landscapes blended with the elegance of the Baroque, so beautiful that it has been given the nickname 'The Garden of Stone'. Noto looks like a honey-coloured town, thanks to the bright limestone architecture of its wide, straight streets interrupted from time to time by squares with staircases, churches, and palaces. At certain times of the year, its colours multiply, as when the Infiorata festival - one of the most significant and famous on the island - fills the central Via Nicolati with carpets of flowers and petals in May.

Noto's most famous monument is undoubtedly the Cathedral of San Nicolò, which stands at the top of a flight of steps and is the highest point of the city's architecture. Directly opposite are the Palazzo Vescovile (Bishop's Palace) and Palazzo Ducezio, home to the Town Hall and the location chosen by Chiara Ferragni and Fedez for their wedding. Also beautiful are the Church of the Crucifix, in the upper part of the village, the Church of the Carmine and Santa Chiara, San Domenico with its extraordinary stucco and polychrome marble, as well as the Church of San Francesco dell'Immacolata with the nearby Monastery of the SS. Salvatore. The numerous palaces include Palazzo Nicolaci di Villadorata with its façade decorated with putti, horses, lions, and other figures, and Palazzo Trigona di Cannicarao, considered the second most beautiful Baroque palace in Noto after Palazzo Nicolaci.

2. Catania: a jewel at the foot of Mount Etna 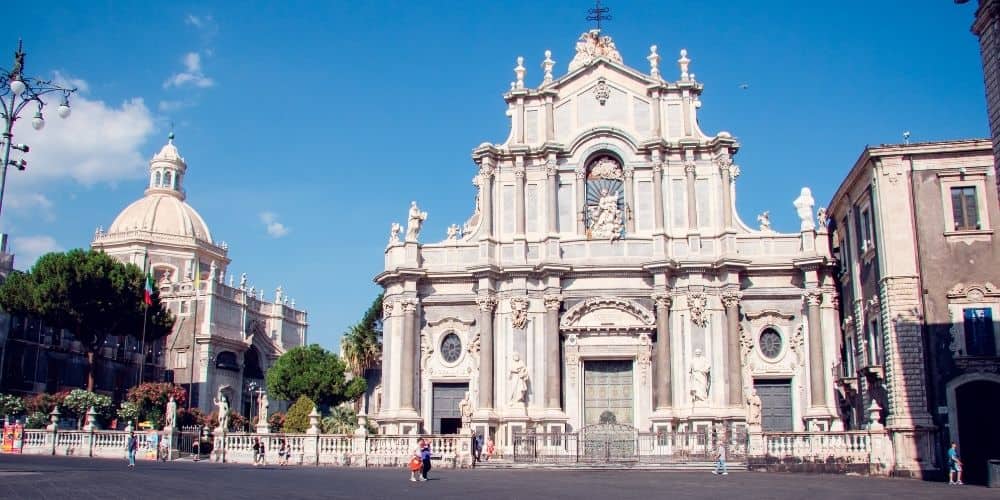 Catania today looks like a big city, a multi-faceted metropolis with the silhouette of the volcano on one side and the sea on the other. Here the material used for reconstruction was lava stone and its precious historic centre has the particularity of having churches and buildings with black and white facades.

Among the must-see stops in the Baroque centre are Piazza Duomo (Duomo Square) with the Cathedral of Sant'Agata and the Elephant Fountain, the symbol of the city, the palaces and churches of Crociferi Street, including the Church of San Giuliano and the Jesuit College, and Palazzo Biscari with its elegant frescoed halls.

Located in the province of Catania, this town has an urban plan that still preserves the typical sixteenth-century characteristics and is full of Baroque treasures. These include the Monastery of San Benedetto, built-in Baroque and Mannerist style, the Church of San Giovanni Battista, where the sinuosity of the Baroque combines with the beauty of Caltagirone majolica, and the Sanctuary of Santa Maria della Stella, with its richly carved Baroque façade.

4. Caltagirone: between ceramics and the charm of Baroque architecture

Caltagirone is famous worldwide for its enamelled ceramics, which can also be found as decorations on domes, building facades, and streets. The beauty of the majolica designs combined with the Baroque architecture makes this town so special. Worthy of mention are the Villa Comunale, the Chiesa del Gesù, and many other buildings in the quarters of San Giorgio and San Giacomo.

Caltagirone's soul bears the marks of various peoples and eras: it is a little Arab, a little Norman, a little Baroque, 18th century, 19th century, and contemporary, and all these facets can be seen in the famous Santa Maria del Monte staircase that links the old and new parts of the town. On each of the 142 steps, tiles decorated with alternating floral, geometric and figurative elements tell this rich story. 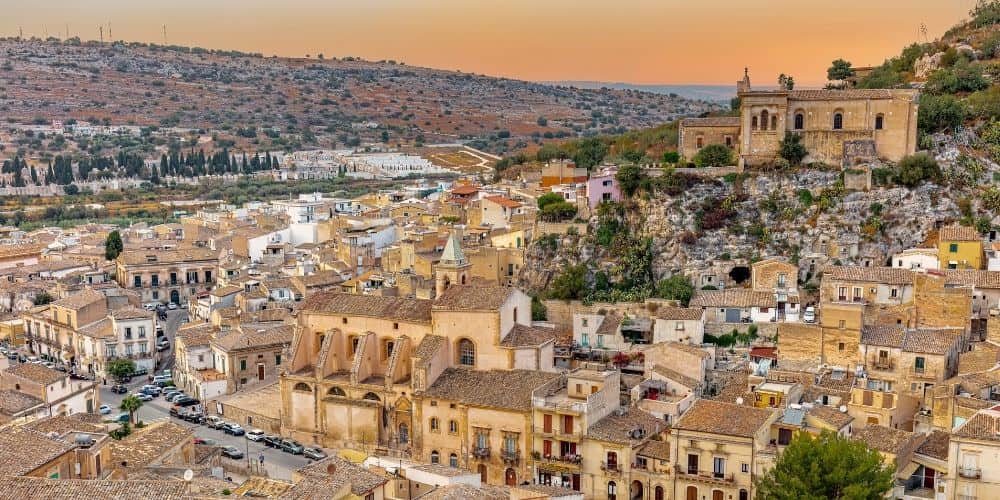 Historian and architect Paolo Portoghesi says of Scicli: "What makes it a unique city is its dialogue with nature. The relationship with nature is more successful in Scicli than in any other town in the entire south-eastern area". The post-reconstruction Scicli is a village nestled between three valleys, a sort of stone garden adorned with enchanting churches and palaces. The reason for its inscription on the UNESCO World Heritage List reads: "...The Via Francesco Mormina Penna, stretches to the nearby Beneventano palace, perhaps the only one in Sicily to display fantastic decoration, in an urban setting where churches rise alongside patrician buildings of late Baroque age. Three churches (St John the Evangelist, St Michael, and Saint Teresa) are from the 18th century".

6. Modica: one of the most picturesque towns in Sicily 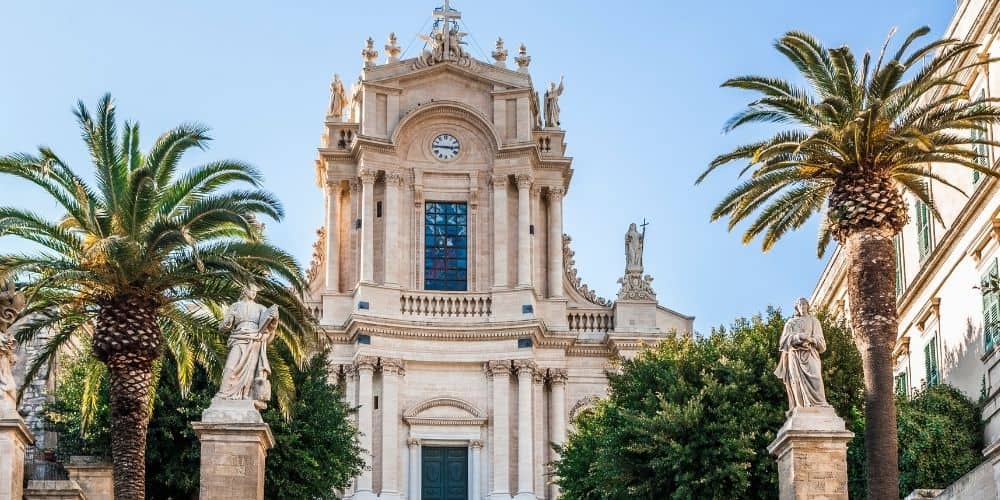 Divided between Modica Alta and Modica Bassa, it is a treasure trove of Baroque beauty perched on the Iblei plateau and is famous for its chocolate production. Its centre is full of narrow streets adorned with staircases, churches, monuments, and buildings mainly in the late Baroque style; churches, such as the Cathedral of San Giorgio and the Church of San Giovanni Evangelista, overlook imposing staircases, while among the most beautiful buildings is Palazzo Napolino -Tommasi Rosso.

In the heart of the Iblei Mountains, its historical centre was split in two by the earthquake. The new Baroque part stands next to the old one and boasts some important churches with majestic, richly decorated façades, such as Saint Sebastian's with its sumptuous interiors and the Basilica of Saints Peter and Paul. Corso Vittorio Emanuele is lined with Baroque palaces, home to local noble families, including Palazzo Pizzo.

8. Ragusa: between baroque beauty and the charm of the landscape 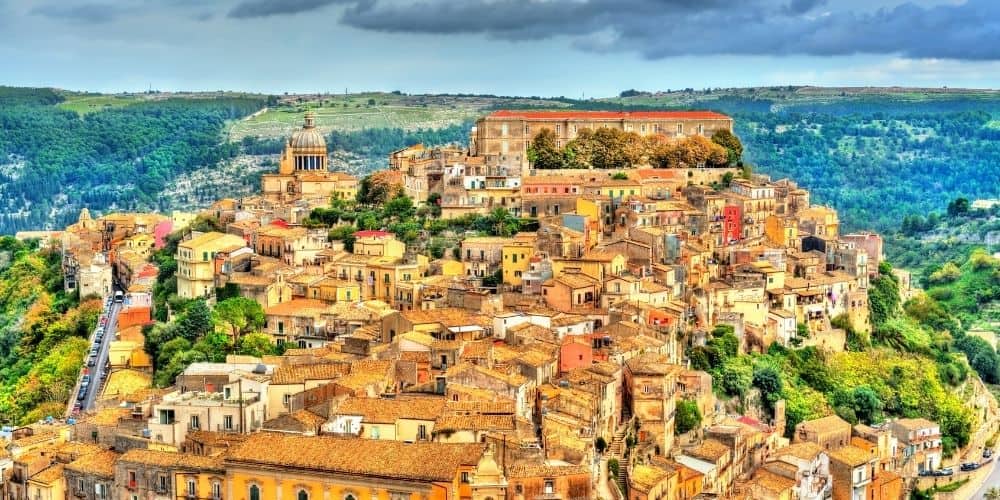 Ragusa is a large city that stands out for the beauty of its historic centre, which blends with that of the landscape, an unspoilt reserve between the Iblei Mountains and the Irminio River. The Ragusa Ibla area boasts a wealth of Baroque buildings, including the 18th-century Palazzo Bertini with its masks on the windows depicting a beggar, a nobleman, and a merchant, typical Baroque characters. Among the churches, Baroque is the city's main place of worship: the Cathedral of San Giovanni Battista, with its façade embellished with sculptures and columns, located in Ragusa Superiore. Other buildings representative of this style are the Church of San Giorgio, the Church of Santa Maria dei Miracoli, Palazzo della Cancelleria and Palazzo Cosentini.

A curiosity about the area 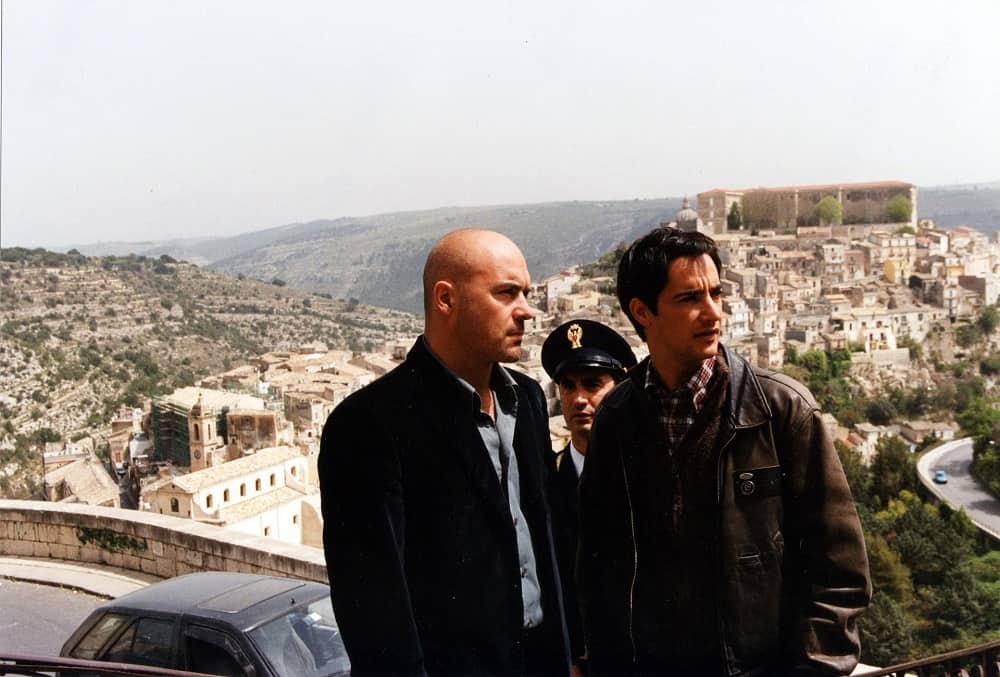 We greet you with another curiosity about the places in the Val di Noto. Have you ever wondered if the famous Vigata of Inspector Montalbano exists? We can say that it does, and not only in the mind of the writer Andrea Camilleri. When shooting the fiction, the movie director and scriptwriter found it in the palaces of Scicli, in the squares of Ragusa, in the streets of Modica, and other towns in the Ragusa area, in their beauty and light.