Ivrea is a town to fall in love with. And it's just an hour's drive from Turin. Discover this open-air museum nestled in a land of forests, castles and Baroque.

Refined and secluded, this small Piemonte town, intimate but full of character, has all the credentials to become the destination of your next trip. Its name is linked to the profitable legacy of Olivetti, thanks to which it is now a UNESCO site of extraordinary value. What to see in Ivrea? Here are a few tips.

Why Ivrea is a UNESCO World Heritage Site Corso Jervis, in the foreground, the Officine ICO and the Social Services Centre

Our journey begins in the past. We have to turn the clock back more than half a century to understand what Olivetti has represented socially, culturally, and entrepreneurially. Thanks to the legacy of this historic manufacturer of typewriters, mechanical calculators, and computer technology, Ivrea is now a UNESCO World Heritage Site.

Yet, the 71 hectares of the site are a modern snapshot of the future. Between the 1930s and 1960s, prominent architects and town planners designed 27 buildings in the Rationalist style, true ingenious masterpieces. They reflect the innovative vision of production relations that have made this Piemonte municipality into the "industrial town of the 20th century".

Ivrea embodies an ideal of urban and architectural development forged around both industrial and community needs. Production buildings, administrative offices, residential units, canteens, kindergartens: all reflect the manifesto of the Movimento Comunità (Community Movement) founded by Olivetti in 1947 and based on a new economic model that rethinks relations between companies and workers.

Olivetti and the industrial city of the 20th century Adriano Olivetti — an industrialist with a vast cultural background and a marked propensity for humanism — took over his father’s company in 1932. He soon realised the need to consolidate the link between territory, employees and industry.

The factory was a jewel inspired by revolutionary ideas. Its importance is not limited to the extraordinary nature of the production insights and the drive towards computerisation (some scholars consider Olivetti's Programma 101 the first personal computer in history). What made Ivrea a social and an economic model was, in fact, the close relationship between factory, design, territory and people. The main factor of the model was the well-being of the employees, whose job was seen as an essential but not exclusive part of their lives.

The designers involved in the project gave a fundamental contribution. They brilliantly conceived the spaces that marked working and social life. Harmonious and functional environments perfectly integrated into the territory, where the modern coexisted with the old without any divisions between city spaces and production areas.

What to see in Ivrea

You can reach Ivrea in an hour's drive from Turin. The itinerary we suggest is perfect for a day in this charming and lively town.

A good idea to explore Ivrea is to start from its highest point, where, in addition to a superb view as far as the eye can see, you will find the town's landmark. Italian poet Giosuè Carducci described it as "the castle with red towers": an imposing 14th-century fortress with a trapezoidal plan that proudly displays its cylindrical towers.

If you look closely, you will notice that the north-western is different from its "sisters": lightning destroyed it in 1676, so now it is considerably lower than the other three. Over the centuries, the complex has been a military garrison, a Savoy family's country residence, and a prison.

Nearby you will find two other buildings of great historical importance: the Bishop's Palace and the Cathedral. The latter was probably built in the 4th century on the ruins of a pagan temple and underwent significant modifications until the 19th century. Cross its neoclassical façade, and you'll admire Baroque interiors rich in stuccoes and decoration.

Walk along Via della Cattedrale and visit the small Church of San Nicola: it guards works that testify to the spread of Baroque art in the Canavese area. Then reach the Seminario Maggiore, home to the Diocesan Library: it features harmonious arcades and an internal courtyard.

From the porticoes in Piazza Ottinetti, where the Civic Museum is located, a 5-minute walk will take you to the green heart of the city, Giusiana Gardens. Here you can admire La Torre di Santo Stefano, a medieval bell tower that represents what remains of a 12th-century abbey.

You will then be amazed at the sight of an incredible construction: an edifice with unusual features that resembles a typewriter. It is one of the emblems of the innovation brought about by Olivetti. In the 1960s, the former Hotel La Serra boasted 55 small dwellings, commercial galleries, a swimming pool and a conference centre. 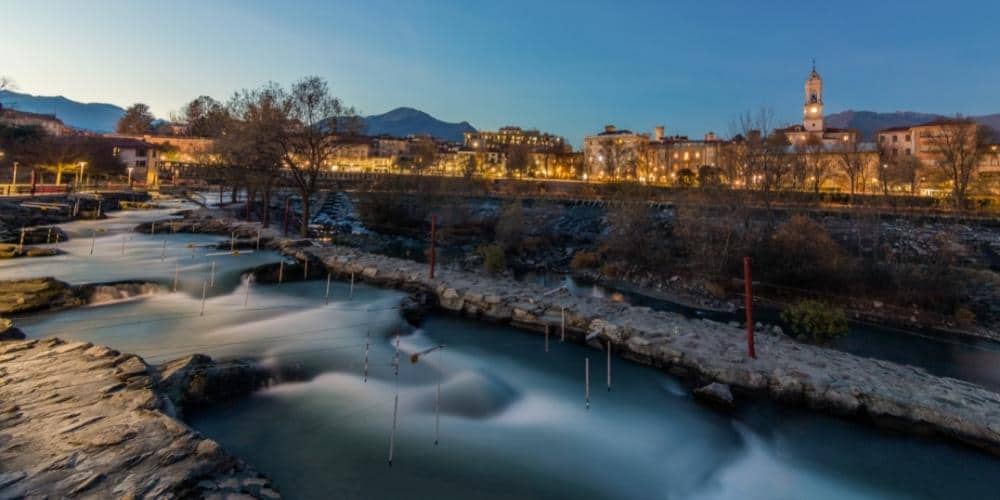 Another walk, this time along Corso Re Umberto and the striking panorama of the Dora Baltea (the river that crosses Ivrea) and you will arrive in Piazza Ferruccio Nazionale. Look around, drink a coffee, and notice Palazzo Civico, the town hall seat.

If you want to discover Olivetti's architecture, you have to walk Via Jervis. MaAM, the Open Air Museum of Modern Architecture, stretches along the road that used to be the company's headquarters, with the emblematic buildings that redesigned the structure of Ivrea.

The Historic Carnival of Ivrea 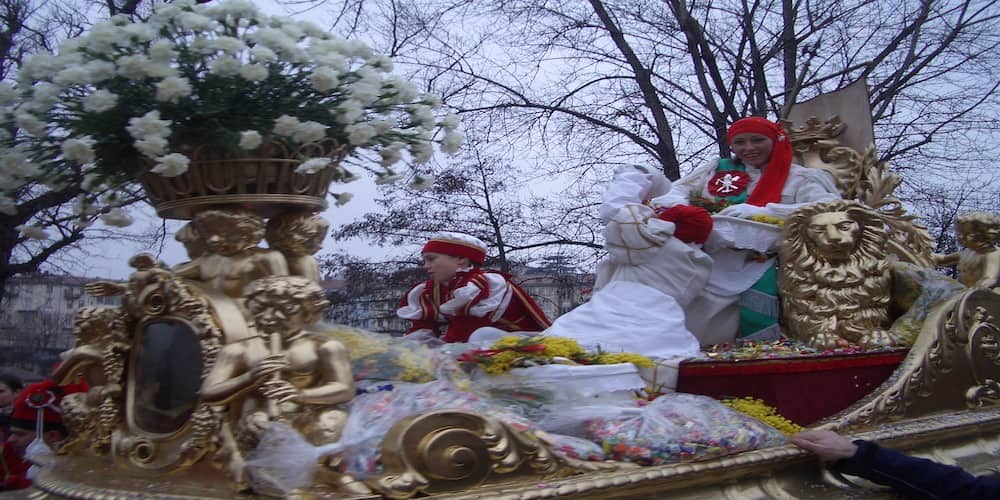 In addition to Olivetti, Ivrea is also famous for its folkloristic Carnival and the Battle of the Oranges. Here is what you need to know.

Celebrated since the Middle Ages, Carnival in Ivrea is the feast of a community. Initially, rival districts represented by five parishes (San Grato, San Salvatore, Sant'Ulderico, San Lorenzo and San Maurizio) organised the celebrations. The Ivrea people are particularly keen on the event that recalls the medieval revolt leading to the free city's birth. 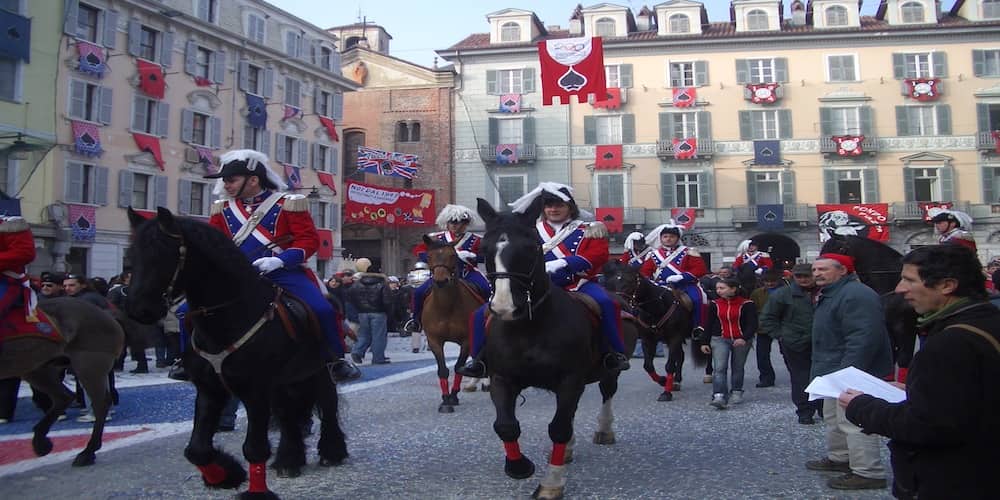 According to legend, the rebellion of Violetta, the miller's young daughter, triggered the riots. The girl, who would become famous as La Vezzosa Mugnaia, beheaded the tyrant to escape the practice of ius primae noctis.

Il Carnevale in Ivrea is not just a simple goliardic feast: it celebrates the community's identity and civic spirit. The ceremonial, observed with devoutness, demands rituals and characters drawn from different eras: Abbà (ten children who impersonate the priors of the five town parishes), La Mugnaia, the Napoleonic General and its General Staff, Il Podestà, Pipes and Drums.

The Battle of the Oranges

La Battaglia delle Arance is a proud town tradition, a great role-playing game that reenacts the revolt of the townsfolk for freedom in a goliardic key. This fruit challenge invades the historic centre for three days.

On one side, nine teams of shooters play the rioters. On the other, the tyrant's soldiers perform on horse-drawn carts. Those who want to avoid being hit by a flying orange must wear a red cap to symbolise their support for the revolt. 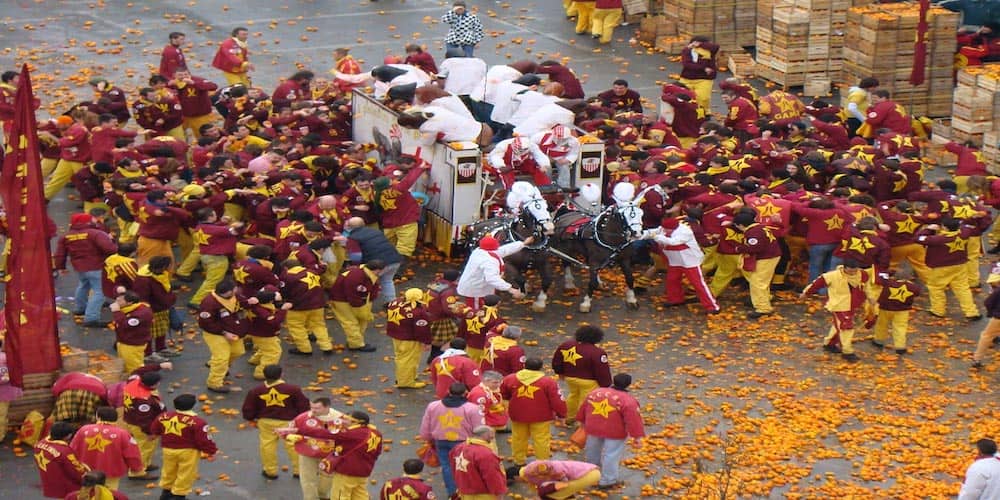 While beans were tossed as bullets during the Middle Ages, the custom of throwing oranges spread in the 19th century, and it seems that a romantic skirmish inspired the ritual. According to tradition, local girls would fling juicy oranges at young men taking part in parades in an attempt to draw their attention.

The practice became routine, and the playful war between passers-by and spectators at the balconies became standard. After the Second World War, the peaceful battle took its current shape. If you are curious, notice that tourists can watch the event without taking part: wire nets protect spectators from flying oranges (but won't keep you safe from splashes).