Looking for the "places of power": the UNESCO heritage of the Lombards in Italy

We will take you on a journey through Longobard Italy on seven stages which have earned UNESCO protection for their beauty and historical value.

Lombards in Italy. Places of Power (568-774 A.D.) is a UNESCO itinerary that winds its way along the Italian peninsula, through seven "places" that bear witness to Lombard culture and power. The Longobards, a people of Germanic origin converted to Christianity, were able to create an original blend of classical culture, Byzantine influences and the fundamental values of the Germanic world. Two centuries of domination have left important historical and artistic evidence that have deserved the protection of UNESCO.

The Lombards have "built a cultural bridge" with the Carolingian age, have created an artistic language universally recognized as "their own" and have helped to strengthen the network of "monastic fortresses" essential for the great pilgrimages of the Middle Ages. All merits that, together with the integrity and the state of preservation of the monuments, led UNESCO to adopt the Lombard heritage and to build the serial route.

The way of life of the Longobards has strongly influenced the formation and growth of the "Italian culture" and deserves to be known in depth. Follow us, then, in the itinerary we have prepared for you, to reread together the Lombard adventure in Italy.

Cividale del Friuli: the Lombard Temple and the Episcopal Complex 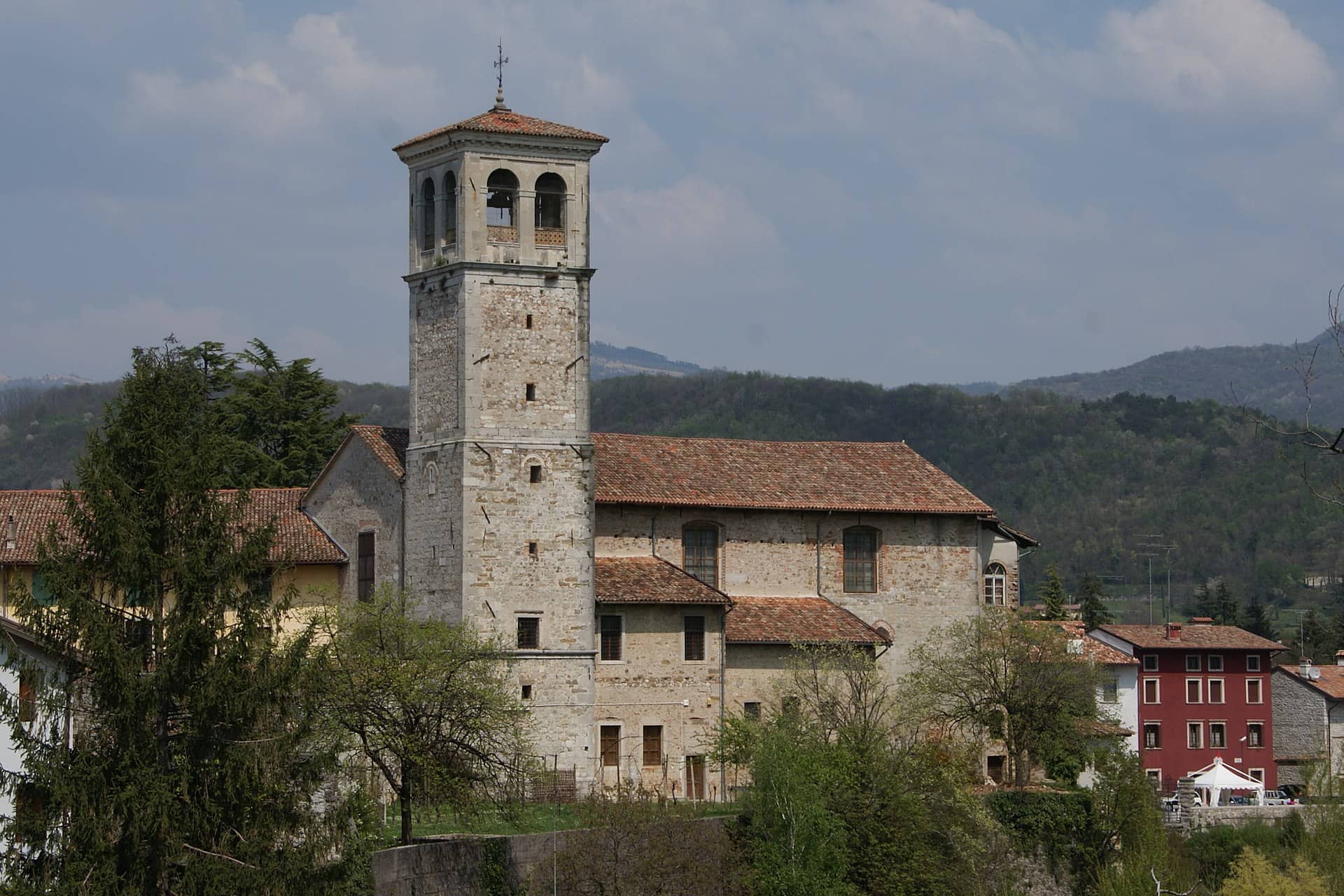 Cividale del Friuli is the first stop of the UNESCO route that will allow you to get to know the places of Lombard power. The main monuments of the Friulian town are located in the area of Gastaldaga, and are the Lombard Temple and the Episcopal Complex.

The Tempietto is one of the high points of Longobard architecture and is particularly important for its decorative apparatus, an example of a mixture of classical and Longobard motifs. The Episcopal Complex of the Patriarch Callisto, instead, is the most important religious center of the city and includes the Basilica, the Baptistery of San Giovanni and the Patriarchal Palace. From the Baptistery come two masterpieces of Lombard sculpture: the Altar of Ratchis decorated with biblical reliefs and the Tegurio of Callisto, an octagonal aedicule that covered the baptismal font.

Longobard art in Brescia: in the wake of the Roman tradition 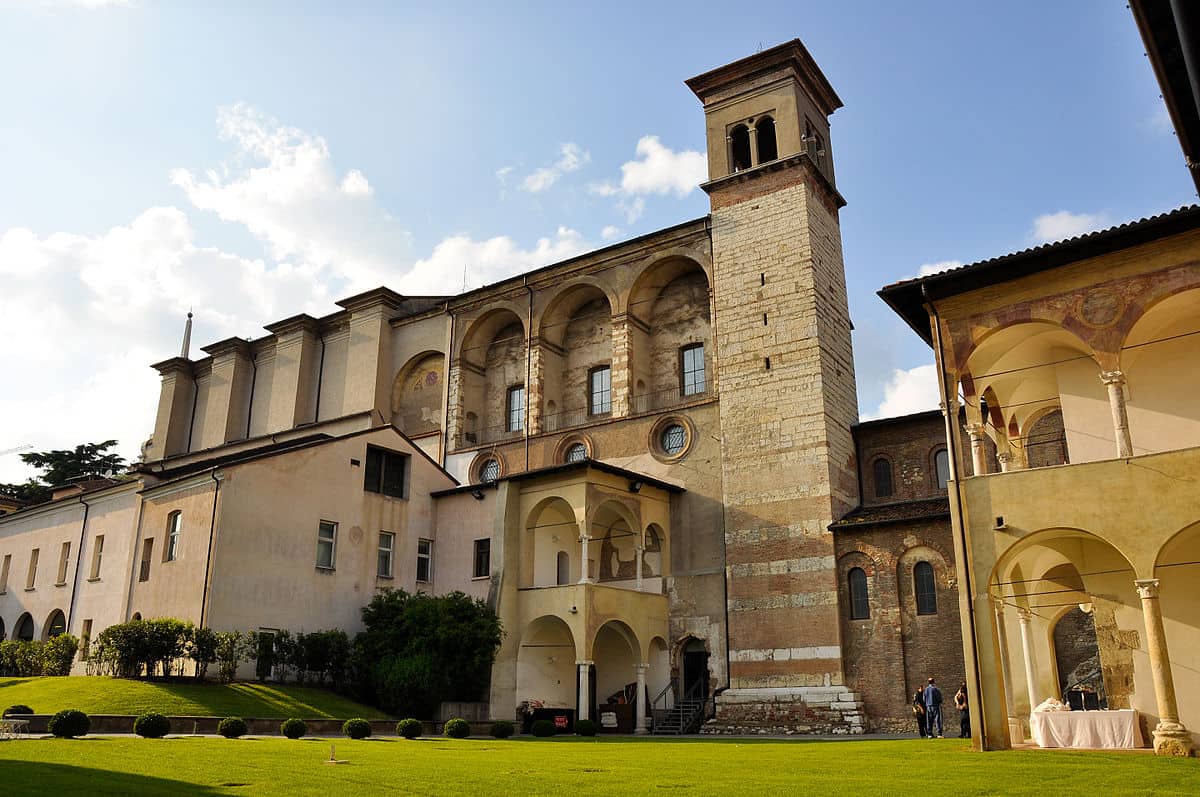 Second station of our journey is Brescia, where the monastery of Santa Giulia with the church of San Salvatore and the archaeological area are UNESCO heritage. The monastic complex was built in 753 by the Duke of Brescia Desiderio, future king of the Lombards. The church of San Salvatore is important for its decorations, among the best preserved of the High Middle Ages. The monastic citadel extended towards the west with its residential structures and production facilities. Today the rests of the ancient complex are incorporated in the archaeological zone where are preserved also vestiges of Roman age as the Sanctuary of republican age, the Capitolium of imperial age and the Theatre of later date.

The archaeological park of Castelseprio and the monastery of Torba 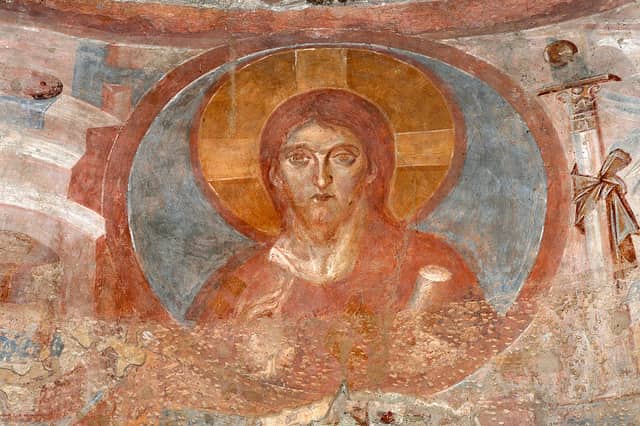 The archaeological park of Castelseprio and monastery of Torba, in the province of Varese, is the third stage of the UNESCO Lombard circuit. The name Castelseprio derives from castrum Seprium, a fortress of the late Roman age, recovered and readapted by the Longobards and later devastated by the Visconti of Milan. However, part of the residential structure, the walls and the complex of San Giovanni Evangelista have been preserved. The monastery of Torba, instead, is an ancient military fortification reused as a female monastery in the Longobard period, one of the many examples of the skilful recovery of the ancient practiced by the Germanic people.

But the most important monument of the area is the church of Santa Maria foris portas, built, as its name suggests, outside the walls of the ancient medieval village. In the Lombard sanctuary, you can admire one of the most fascinating and enigmatic cycles of medieval painting: the Stories of the Infancy of Christ, still at the center of heated interpretative debates due to its complex iconography.

The basilica of San Salvatore in Spoleto

The fourth stage of the UNESCO site dedicated to the Lombard testimonies in Italy leads us to Umbria, in Spoleto, in the presence of the well-preserved basilica of San Salvatore. A monument risen "on the ashes of the Roman art", fruit of a wise reuse of decorative and architectural elements of classical age. The building presents a basilical plan divided by three naves, with a presbytery covered by a singular octagonal vaulted ceiling. Unfortunately, the interior has lost most of its decorations, but on the other hand, you can still admire the imposing Doric and Corinthian columns that support the church and the three entrance portals, evidence of the intelligent and original "neoclassical revival" of the Lombard architect.

The Tempietto del Clitunno, the jewel of the longobard architecture 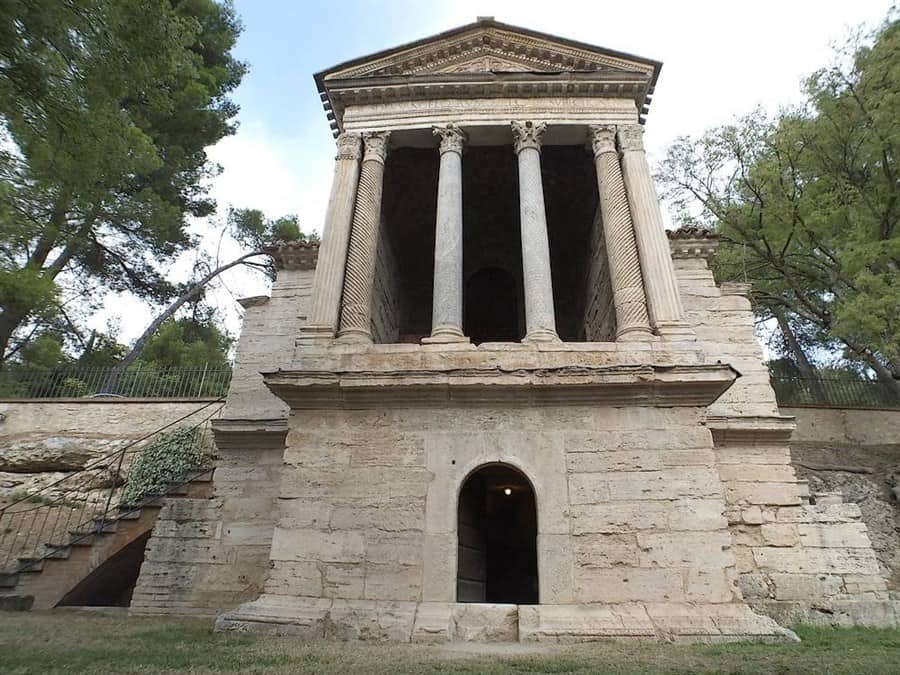 For the fifth appointment with the Longobard heritage protected by UNESCO, we remain in Umbria, to go to Campello sul Clitunno, in province of Perugia. Here you can admire a small jewel of architecture, the so-called Tempietto del Clitunno. It is a small temple tetrastilo Corinthian side with two arcades that presents interesting decorations that enrich the vegetable agile and elegant columns. Of great interest the inscription that camps on the architrave, a rare example of monumental epigraphy of the Early Middle Ages. The skilful reuse of classical remains, the reinterpretation of Roman architecture and the enigmatic decorations of the interior make the Tempietto one of the masterpieces of Lombard art.

Benevento: the church of Santa Sofia 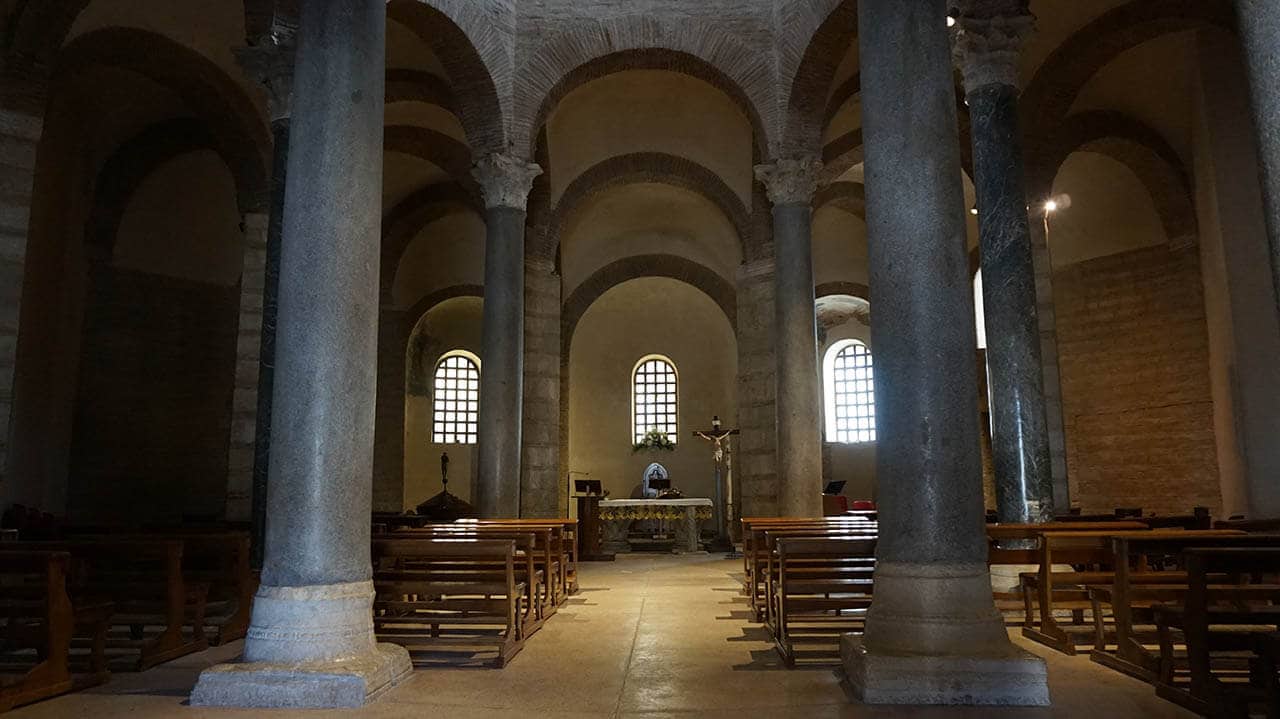 For the penultimate stop of the UNESCO Lombard tour in Italy we move to Campania, in Benevento, to visit the church of Santa Sofia. This was built at the behest of Duke Arechi II around 760 "to ensure the salvation of his soul and the redemption of the souls of the Lombard people". The church has an original central plan, whose interior space is marked by pillars and columns decorated with classical elements, which draw a hexagon and a concentric decagon. An original architecture of theatrical style, which you have to imagine entirely decorated with frescoes of sacred subject, such as those dedicated to the Stories of Christ that are still preserved in the two minor apses. 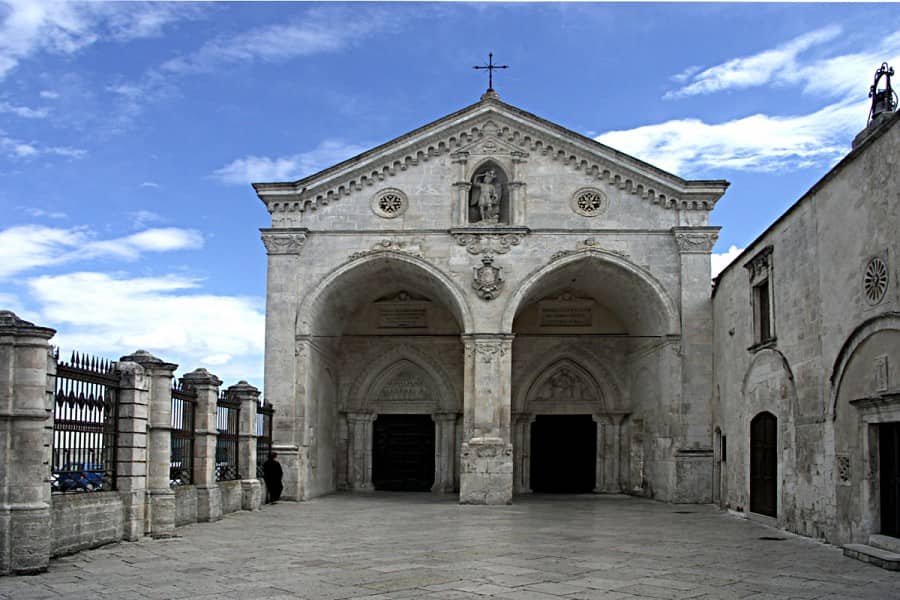 Our "UNESCO journey" in Lombard Italy ends in Apulia, precisely in Monte Sant'Angelo, in the province of Foggia, a territory annexed to the Duchy of Benevento in the 6th century. Right here, on the Gargano, the cult of the Archangel Michael had progressively spread, whom the Longobards considered very similar to their Wodan, god of war. In honor of the saint, the Lombards decided to build a sanctuary that has developed over the years, rising above the cave, the primitive core of the complex. A building typology that will be replicated at length in Italy and in Europe, for the construction of important places of worship and devotion, as if to emphasize the ascent of the soul from "the dim light of Purgatory to the radiant light of Paradise".