Church and Dominican Convent of Santa Maria delle Grazie with “The Last Supper” by Leonardo da Vinci, Unesco Site since 1980

The Last Supper is preserved in the refectory of the church of Santa Maria delle Grazie in Milan. It was selected as an UNESCO World Heritage Site in 1980 and it has an interesting history full of curiosities. It withstood restoration and bombings and it is still visible today in all its splendor.

In the Dominican Convent of Santa Maria delle Grazie in Milan we can find one of the most famous masterpieces of Leonardo Da Vinci: the Last Supper. It is an original representation of the subject made with a new and innovative painting technique conceived by the genius of Leonardo. After all, with the artist, engineer and inventor Da Vinci, originality and innovation are the key words to be used. The florentine artist painted it on commission of Ludovico il Moro (Duke of Milan) between 1494 and 1497 on the wall of the refectory of the milanese convent. The city of Milan was always dear to Leonardo who, right here, could give life to his most exceptional inventions and some of his most famous works.

The construction of Santa Maria delle Grazie began in 1463. There were two important phases in its construction: that of the architect Guiniforte Solari, chief engineer of the Duomo and of the Certosa di Pavia, and a second phase dated between 1480 and 1497. In 1492, Ludovico Sforza commissioned Donato Bramante, one of the most sought-after architects of the peninsula, to work on the building because he wanted to enlarge it and place inside it his and his wife's remains.

The complex consists of the church and the convent composed of a basilica, a library, three cloisters and a refectory. It is precisely in this last room, and in particular in the north wall, that masterpiece is located.

The site was severely damaged by bombing in 1943, but then completely restored and renovated. The Last Supper miraculously survived the allied bombings. There is evidence of restoration work from the eighteenth century to the present day. 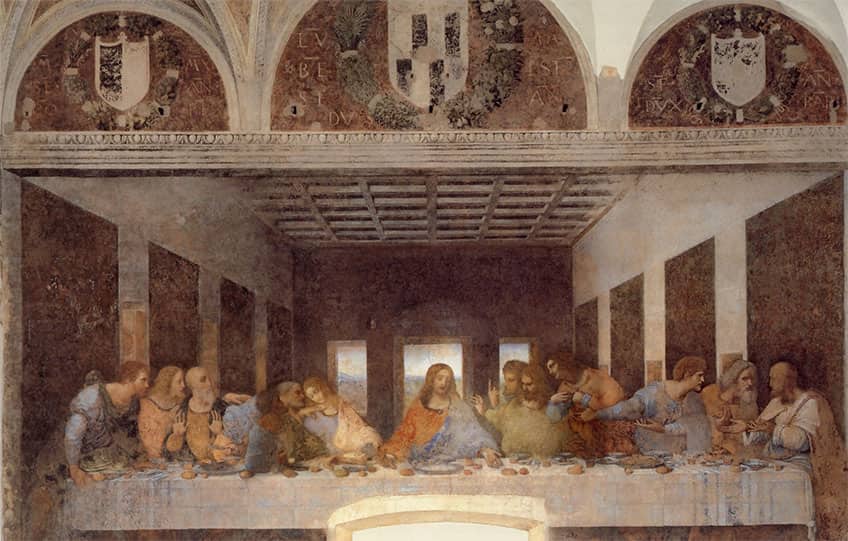 The painting radically transforms the classical interpretation of the Last Supper. It depicts a very particular moment of the event, perhaps the most intense. Jesus is depicted among the twelve apostles immediately after his declaration "one of you will betray me". Each apostle, portrayed according to specific and distinct expressions, wonders who the betrayer might be. In this picture, Leonardo focuses on the reactions and emotions triggered by Jesus' words.

For the Last Supper, the artist chose not to use the fresco technique because he needed to intervene assiduously and modify the details of the work. On a double layer of plaster, Leonardo applied tempera mixed with oil, directly on the drywall. In this way, he was able to correct the work day after day according to his numerous afterthoughts and achieve an extraordinarily realistic effect, capturing every nuance of light on the faces of the apostles and the objects depicted.

Unfortunately, Leonardo's innovative technique proved to be very delicate. As already mentioned, over the course of time, the Last Supper needed continuous restoration, the last of which was completed, after 20 years of work, in 1999. Given its fragility, the painting has never been moved from its original location where it still resides under the eyes of hundreds of visitors.

Currently, one of the most important and difficult aspects of the conservation of the fresco is the pollution caused by the large number of tourists. Continuous monitoring is carried out to ensure optimal atmospheric conditions inside the refectory and thus avoid deterioration of the work.


The complex of Santa Maria delle Grazie and the Last Supper was inscribed on the UNESCO World Heritage List in Paris in 1980. In the words of the examining commission, the work "is a unique artistic achievement of outstanding universal value that transcends all historical contingencies" that "has exerted a considerable influence, not only on the development of an iconographic theme but also on the destiny of painting" and that "it is no exaggeration to say that its creation opened a new era in the history of art". The values attributed to the work by the UNESCO Commission, therefore, lie in the masterful use of a new painting technique and in the attention paid to iconographic representation. But as viewers of this timeless work, we can add an additional value: the emotional value that the vision of this scenario triggers in anyone who observes it and identifies with the reactions of the characters depicted. We seem to immerse ourselves in that specific moment, to listen to the words of Christ depicted in the center of the scene. The Last Supper is one of the most famous paintings of the Italian Renaissance and art history in general. Millions of visitors come from all over the world to admire this UNESCO heritage site. The uniqueness of this property is also in its fragility. Continuous restorations have revealed not only the beauty of this painting, but also its unique history, as unique as the genius who gave it life.

The Last Supper is one of the most famous paintings of the Italian Renaissance and art history in general. Millions of visitors come from all over the world to admire this UNESCO heritage. The uniqueness of this property is also in its fragility. The difficult technique used, the continuous restorations have made it famous not only for its beauty, but also for its unique history as the genius who gave life to it.