Castel del Monte, thanks to its location, the mathematical and astronomical precision of its layout and its perfectly regular shape, is a unique masterpiece of medieval architecture that reflects the humanistic ideals and broad education of its founder: Frederick II.

The castle is a cultural site of "outstanding universal value" thanks to the perfection of its shape, the harmony and the perfect fusion of different cultural elements from northern Europe, the Muslim world and classical antiquity. 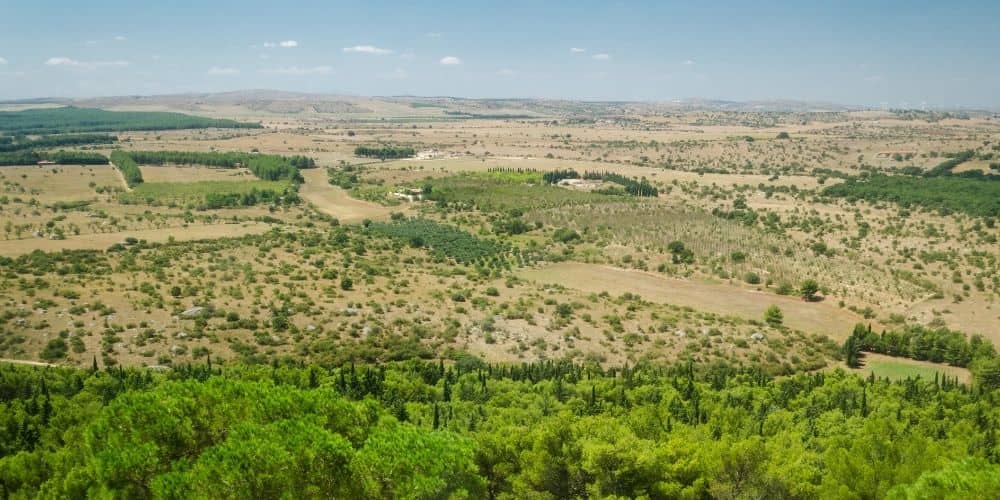 Castel del Monte, located in Andria, in the Apulia region, along the Adriatic coast of southern Italy, rises on the top of a hill dominating the surrounding region; to be more precise, it is situated at 540 metres above sea level in the western part of the Murgia region. The castle is a medieval fortress built at the behest of the Emperor of the Holy Roman Empire, Frederick II of Hohenstaufen, whose humanistic cultural vision is reflected in the building's location, its perfect octagonal shape and the mathematical and astronomical precision of its layout. In 1996 the site was included in the prestigious UNESCO list of World Heritage Sites as it is of "outstanding universal value" in the perfection of its shape and its harmonious blending of architectural elements from classical antiquity, the Islamic Orient and north European Cistercian Gothic.

Frederick II built Castel del Monte in 1240, near the church of Santa Maria del Monte, now disappeared, and indeed for the first few centuries this beautiful fortress was known as the "Castle of Santa Maria del Monte". Frederick II, fond of mathematics, poetry, philosophy and astronomy, is considered the precursor of modern humanists and his deep and broad education is immortalized in the copious astrological and esoteric symbols that characterize the structure. The emperor was endowed with a cosmopolitan spirit and thanks to his personality of enlightened ruler, during his reign the intense cultural activity in southern Italy took place in a climate of peace, tolerance and prosperity, so much that Frederick II used to welcome Greek, Arab, Italian and Jewish scholars to his court. A different set of functions have characterized this extraordinary monument throughout history, but from the seventeenth century the castle fell into a state of abandonment until 1876, when the Italian State bought it and arranged its restoration.

The castle features different stylistic elements harmoniously fused together, from the lions positioned at the entrance in Romanesque style to the Gothic frame of the towers, from the interior friezes in classical style to its remains of refined Islamic mosaics. This building is a unique testimony of medieval architecture, inspired by numerological mysticism. The castle is indeed built based on the mathematical principle of the repetition of the number eight; the shape is octagonal, eight are the towers, also octagonal in shape, which are located at each corner of the building and eight are the rooms that characterize each floor. The number eight is the number of the cosmic balance and therefore the octagon, intermediate figure between the square, symbol of the earth, and the circle, symbol of the infinity of the sky, would mark the passage from the earthly dimension to the spiritual one.

The whole construction is imbued with strong astrological symbols and its position was studied in such a way that on specific days of the year, such as the days of solstice and equinox, shadows with a particular direction are created on the walls. The castle is divided into two floors, joined together by spiral staircases, arranged in an anti-clockwise direction, positioned inside three of the towers. Inside some of these towers cisterns for the collection of rainwater are arranged, in other towers, instead, there are bathrooms, equipped with a latrine and a sink: a sophisticated hydraulic system of Oriental origin. The cisterns conveyed, in part, to the central cistern located below the inner courtyard, a courtyard that is octagonal in shape as well. Being inside the courtyard gives you the impression of being inside a well, which in medieval symbolism represented knowledge.

Due to the lack of walls, moat and stables, elements that characterize most of the medieval military buildings, the absence of internal corridors that imposed, therefore, a compulsory path, the presence of the oldest bathrooms in history and the strong symbolism of which it is imbued, scholars attributed Castel del Monte the most diverse functions: temple of knowledge, secluded place to study or even a wellness center on the model of the Arab hammam. Moreover, due to its octagonal shape, which recalls the geometric form of a crown, it is assumed that the building was built as a monument symbol of the imperial power of Frederick II.

In 1996 the site was declared a UNESCO World Heritage Site since it is of "outstanding universal value" in its formal perfection and its harmonious blending of cultural elements from northern Europe, the Muslim world and classical antiquity. Moreover, Castel del Monte is a unique masterpiece of medieval architecture, reflecting the humanist ideas of its founder, Frederick II of Hohenstaufen.

The inclusion on the Unesco list is motivated by three criteria: (i) given its formal perfection and harmonious blending of cultural elements from northern Europe, the Muslim world and classical antiquity, Castel del Monte is a unique masterpiece of medieval military architecture which reflects the humanist ideas of its founder, Frederick II of Hohenstaufen; (ii) inseparably linked to Frederick II of Hohenstaufen, the building of Castel del Monte illustrates the cosmopolitan spirit of the Emperor who brought together Greek, Arab, Italian and Jewish scholars to his court in Palermo. This designates him as one of the precursors of the modern humanists; (iii) symbolic of the Mediterranean policy of a Germanic Emperor who was born at Iesî, brought up in Sicily and attracted at a very early age by the Oriental world, Castel del Monte combines intellectual and moral elements from the great Mediterranean civilizations in one creation.