Here is where you can see World War II sites in region of Lazio, 7 war landmarks from Rome to Cassino.

It's a Sunday and the sky is clear over Rome.

General Clark proudly leads the American troops in the liberation of Rome, reaching the Vittoriano buildingat the very heart of the city ,the symbolic place of Mussolini's gatherings. The Roman citizens take to the streets to celebrate the Allies.

The Germans of Field Marshal Albert Kesselring are retreating north, saving further devastation in Rome and Lazio. The Second World War is almost over.

If you've ever wondered where to see World War II sites near Rome, you've come to the right place. We have selected 7 historical sites in Rome and Lazio showing the brutality of the conflict in this part of Italy.

Seven stages for an ideal journey to remember the absurdity of war and to see the scars it left in the Lazio region.

War tourism in the sites of World War II grew a lot in recent years. It should not be considered like a simple recreational activity: war tourism is a moment of study and reflection on an historical period whose consequences still echo strongly today.

The lively harbour of Anzio.

The Anglo-American troops chose the pretty port towns of Anzio and Nettuno for their landing, at the time united in a single municipality called Nettunia.

The troops landed in January 1944 on the beaches north of Anzio: the Levante beach (codenamed X-Ray and reserved to the Americans) and the coastline that goes from Tor Caldara to Tor San Lorenzo (Peter Beach, attacked by the English).

The Anzio Beachhead Museum (“Museo dello Sbarco di Anzio”) provides an interesting reconstruction of the landing and the fierce fighting that followed, through unique objects, weapons, vehicles, prints and uniforms. Many of these objects have been fished out few hundreds meter from Anzio's port.

The museum is hosted in the halls of the beautiful Villa Adele, about 400 meters from the train station, and is divided into four sections (English, American, Italian and German). Admission is free and it is possible to book guided tours.

The Paradise on the Sea in Anzio (“Paradiso sul Mare”) is a wonderful Art Nouveau building, born as a casino. It was later chosen by General Mark Clark as the headquarters of the allied command. After the war, the Paradiso was used as a film set for masterpieces such as Fellini's “Amarcord” and Alberto Sordi's “Polvere di stelle”.

Anzio is mentioned in a song by Pink Floyd, "When the tiger broke free", dedicated to Roger Water's father, killed near Anzio in the hours following the troops landing.

Anzio and Nettuno are well connected by train to Roma Termini (1-hour journey, around €5), making it a great day trip for history and sea lovers - there's plenty of fish restaurants too. 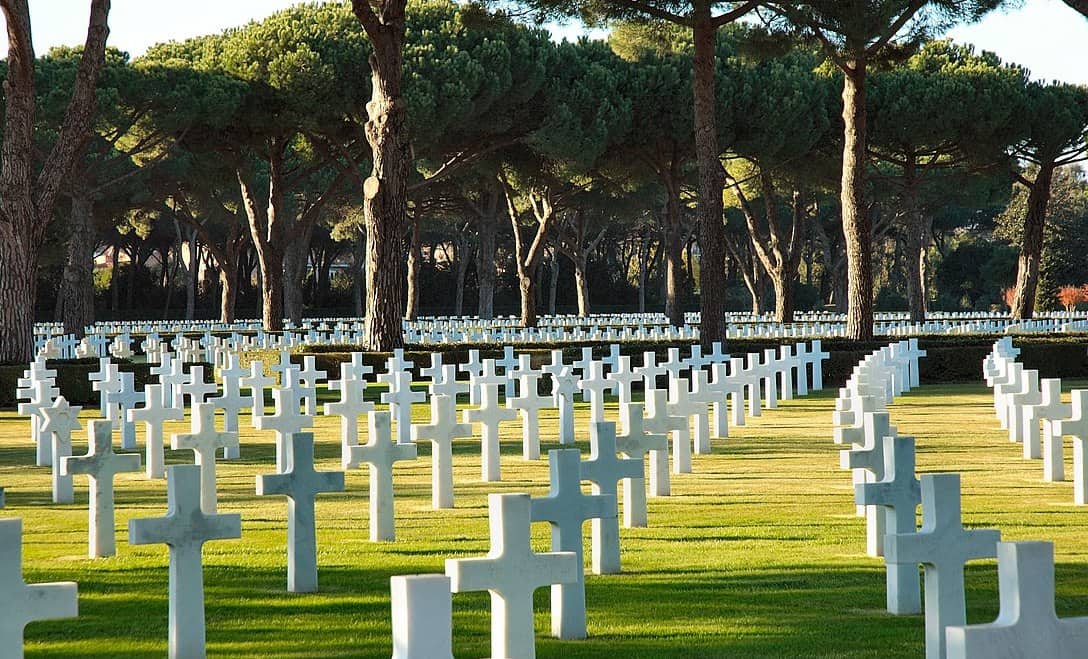 Nettuno is quite a popular tourist destination near Rome, boosting a well-preserved medieval town centre (the Borgo Medievale), with cobbled streets, a fort on the sea and a lively atmosphere.

The Sicily – Rome American Cemetery and Memorial (“Cimitero Americano di Nettuno”) attracts crowds of US and British tourists, mostly war veterans and their families, who gather to commemorate the war years and the fallen comrades. The cemetery is surrounded by trees and it's really well-kept, with thousands of white crosses perfectly aligned along the avenue, making the visit an emotional experience.

The cemetery is the resting place for the bodies of nearly 9,000 soldiers who fell in the various battles of the Italian campaign: an ode to the absurdity of war.

Anzio and Nettuno are well connected by train from Roma Termini (1-hour journey, around €5), making them a perfect day trip from the capital for sea and history lovers. 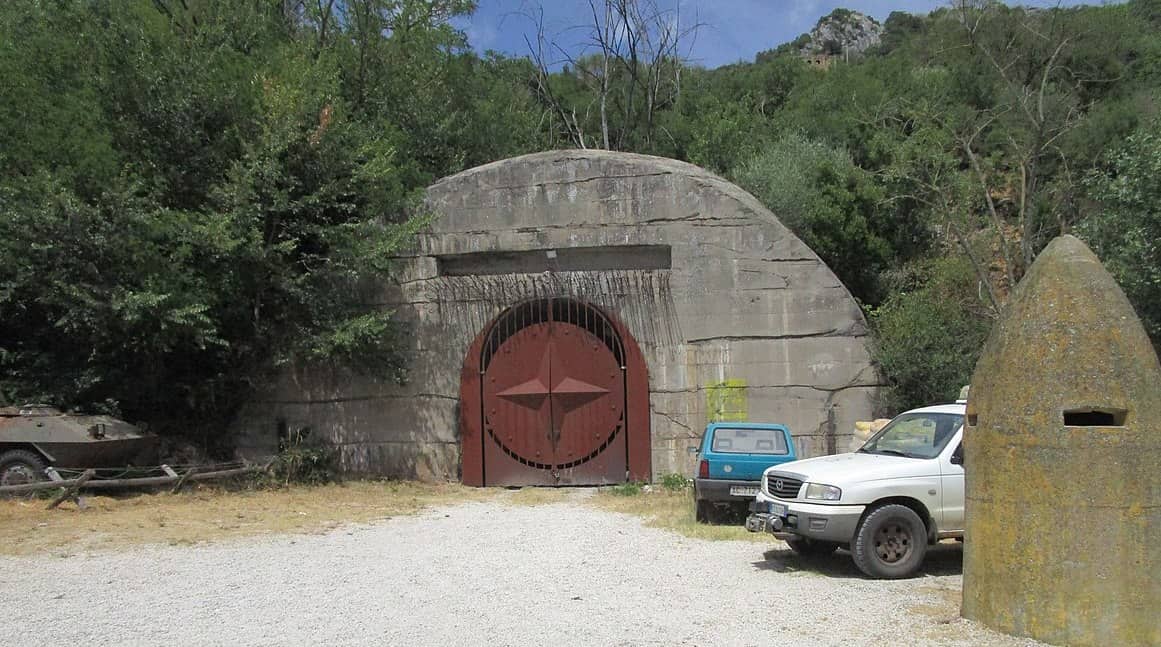 The entrance of the bunker of Monte Soratte.

The Bunker Soratte was built in 1937 by order of Benito Mussolini and remained secret for many years. It has recently been turned into a museum, an historical landmark reminding us of World War II and the Cold War.

Over 4 km of complex bunker tunnels were dug inside the southern slope of Mount Soratte, near the municipality of Sant’Oreste (50 km north of Rome).

The bunker has had different functions over the years: before the war, it was an air-raid shelter for high government officials, and in 1943 Field Marshal Kesselring transformed it into the center for the Supreme Southern Command of the German forces in Italy. After the war it became an Army warehouse and then a nuclear shelter.

The guided tour takes visitors through this maze of concrete tunnels at a depth of 300 meters, using materials patiently recovered from the bunker, making the visit very engaging.

The War Room is not to be missed: it was used by NATO and the Air Force as an operations center, this was the room from where Italy would manage its survival following a nuclear attack.

The bunker can only be visited with a booked guided tour at a cost of €10 per person (thanks to the volunteer association called "Bunker Soratte"). The village of Sant’Oreste, the perfect base for a visit, is about an hour's drive from Rome, but it can also be reached from the capital by bus or train, passing through Viterbo. 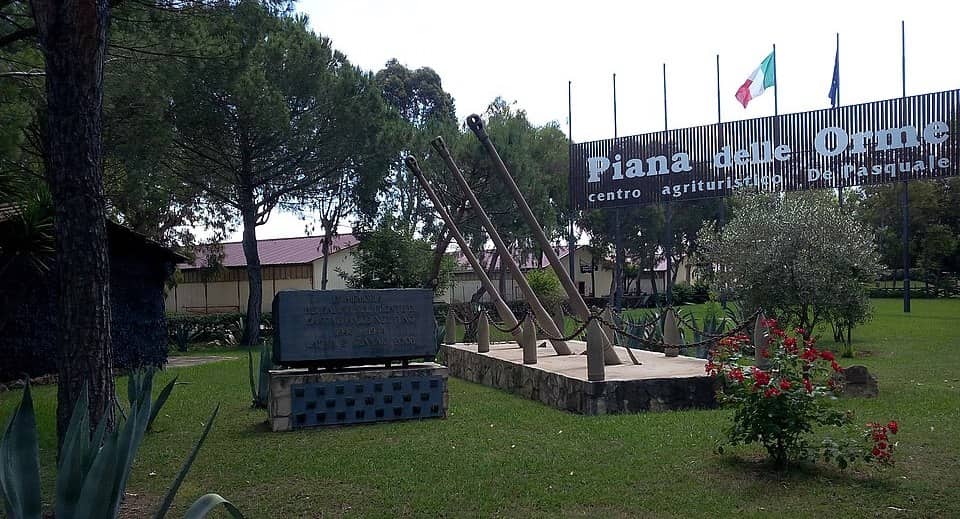 Piana delle Orme is a museum featuring 60,000 local artefacts from the recovery of the Pontine marshes through the World War II and the liberation of Rome.

The gem of the museum is the American M4 Sherman tank, used for the 1944 landing, rescued in the sea nearAnzio in 2002. Roberto Benigni borrowed the tank to shoot the famous final scene of his famous 1997 film Life is Beautiful.

The museum is located in Borgo Faiti (a few minutes drive from Latina) within a farmhouse and was founded in 1997, starting from the private collection of Mariano De Pasquale.

Piana delle Orme is divided into a War Path and a Peace Path. The pavilions are mainly devoted to the display of objects from World War II: military vehicles, dioramas, recordings and sound effects depict how Italy became involved in the war following Mussolini’s declaration of war, the North African campaigns, the amphibian landing of the Allied troops near Anzio and the battle for Montecassino.

The Peace Path focuses on peasant life and the recovery of the Pontine marshes in the 1930s. Not to be missed is the fantastic pavilion dedicated to vintage toys.

The museum is also suitable for children and the ticket costs 13€ pp: ideal time visit is 3-4 hours. After the visit, you can buy vintage gadgets from the museum shop or have lunch at the farmhouse restaurant.

The cloister of the abbey with its scenic view.

Perched at 516 metres, the abbey of Montecassino is a Benedictine monastery founded in 529 a.C. from Saint Benedict himself.

Montecassino is the second oldest monastery in Italy (after Santa Scolastica in Norcia). Located near Cassino, south of Lazio region, this majestic abbey boasts a museum, a cathedral, an elegant Renaissance cloister and a spectacular panoramic view.

In mediaeval times, Montecassino was an important religious and cultural landmark. The abbey experienced many turbulent events, including looting (from the Lombards and Saracens) and earthquakes, before becoming the museum we know today.

In 1944, the abbey also witnessed one of the most terrible battles of the Italian front.

The Allies mistakenly believed that German troops were entrenched behind the mighty walls of the abbey, and so they mercilessly bombed the building, razing it to the ground and killing many civilians refugees there. In the useless attack to conquer the abbey, thousands of American soldiers were killed.

The ancient codices of the abbey have been saved from destruction, even though it is thought that some of them found their way to Herman Göring as a birthday gitf.

The abbey was fully rebuilt from its ashes in the aftermath of WWII. Today, Benedictine monks still live in the monastery and visitors can still see them around.

If you have a car, you can reach Cassino in about 2 hours from both Rome and Napoli. Taking the train is also a good option. The admission to the cloister and the cathedral is free, while the entry for the museum is only 5€.

2. The Liberation Museum and the Ghetto of Rome.

The Great Synagogue of Rome on the river Tiber.

Every corner of Rome is a window on a different time of history: the years of World War II left deep scars, both in the urban planning and in the soul of the Capital.

Best site to start knowing more about WWII in Rome is the Museo della Liberazione ("Liberation Museum"). The museum is open every day and it's free of charge: you can find it at the famous address of Via Tasso 145. This building is sadly known as the place where the Roman anti-fascists were detained by the Nazis.

The Liberation Museum is the perfect place to keep the knowledge of these tragic memories alive for the new generations, thanks to its collection of original documents and the restoration of the cells used by the Germans for tortures.

The district of San Lorenzo is close to the museum and it's the area of Rome that suffered the most from the bombings of July '43. The many victims of those days are commemorated in the “Parco Caduti" (or "Park for the Fallen of 19 July 1943").

In the Sant’Angelo district, on the other hand, visitors can find the Ghetto of Rome, the second oldest ghetto in Italy. This area of ​​the capital is appreciated by tourists and locals alike for its cultural vitality and for its original restaurants offering Roman-Jewish cuisine (try the famous Giudia artichokes if you are around).

You should visit the Great Synagogue of Rome ("Tempio Maggiore") a wonderful synagogue facing the river Tiber. It's a landmark for the local Jewish community, also housing the Jewish Museum of Rome. If you walk through the streets of the Ghetto, keep your eyes open for the so called pietre d'inciampo (or "tumbling blocks"), small blocks that recall the name of the citizens deported to lagers by the Nazi-fascist forces.

1. Via Rasella and the Fosse Ardeatine Memorial in Rome

Entrance to the monument for the Ardeatine cave massacre (PH: By antmoose - Flickr, CC BY 2.0).

To complete our journey, we recommend visiting two Roman war landmarks: Via Rasella and the Memorial and the Museum of the Fosse Ardeatine.

Via Rasella is the site of one of the most important partisan actions, a bomb that exploded at number 139 hitting a Nazi-Fascist unit on March 24, 1944. On the walls between via del Boccaccio and via Rasella, you can still see the marks of the German machine guns firing in response to the attack.

The Nazis reaction was the retaliation of the Fosse Ardeatine, where 335 innocent citizens were killed in the quarries named "Fosse Ardeatine", later blown up with dynamite to cover their tracks.

This shrine was built in 1949 and includes the massacre caves and the mausoleum where the bodies are buried. The visit to the Fosse Ardeatine is a touching and highly educational experience, to keep alive the memory of the war.