What to see in Umbria: ten unmissable places

What to see in Umbria? The green heart of Italy is full of gems to discover. Here are 10 unmissable places.

Umbria is one of the regions most rich in charm and history of the Italian peninsula. Land of saints and mystics, Umbria was home to ancient civilizations such as those of the Romans and the Lombards, but also the indisputable protagonist of one of the most fruitful seasons of the Renaissance. This is why we have prepared a special itinerary for you, so that you can get to know its most important treasures. Follow us!

10. Assisi: in the shadow of San Francesco and Santa Chiara

Your adventure in the Umbrian land begins with the city of Assisi, a city of peace and spirituality, which has inextricably linked its name to the famous San Francesco.

And it is precisely the eponymous Basilica majestically decorated by Giotto, to be the main destination of your visit to Assisi. We advise you, however, to also take a look at the Basilica of Santa Chiara, to pay your tribute to the relics of the "companion of San Francesco".

A visit to Lake Trasimeno, in the province of Perugia, is certainly among the experiences not to be missed on your trip to Umbria. The lake is the fourth largest in size of the entire peninsula and "welcomes with its embrace" numerous pleasant and picturesque villages, such as Passignano sul Trasimeno, San Feliciano, Castel Rigone and Castiglione del Lago.

There are three instead, the islands of Lake Trasimeno: the Polvese Island, the Minor Island and the Major Island, the only one to be inhabited. We advise you to make the complete tour of the lake by bicycle, to fully enjoy its majestic beauty.

8. Gubbio: city of Art and History

Your Umbrian adventure continues with a trip to Gubbio, in the province of Perugia, a city rich in art and history. Gubbio is, in fact, literally scattered with monuments, among which the Palazzo dei Consoli, the Palazzo Ducale, the Basilica of Sant'Ubaldo and the Duomo are absolutely unmissable. We also advise you to do three laps around the Renaissance Fontana del Matto, as usual, to obtain the coveted qualification of "crowds"!

7. Foligno: a dip in the Middle Ages

Like other Umbrian cities, Foligno is also rich in monuments that tell us about its glorious history. Of particular interest is Piazza della Repubblica, dominated by the Duomo, the Palazzo Comunale and Palazzo Trinci, imperishable symbols of the city.

If you are in Foligno in the summer months, we suggest you participate in the famous Quintana joust, a chivalrous tournament that will make you relive the glories of the Middle Ages.

6. Norcia: the home of San Benedetto

Another fundamental stop for lovers of spiritual and religious tourism is certainly the town of Norcia, in the province of Perugia. In fact, Norcia is famous all over the world for giving birth to San Benedetto, founder of the eponymous order that spread his teaching throughout Europe.

In Norcia it is possible to admire the ruins of the Basilica of San Benedetto, built, according to legend, by incorporating the remains of the saint's house. Of great interest is also the Castellina, in Piazza San Benedetto, former residence of the pontifical governor, now a museum.

5. The Marmore Falls: a miracle of technology

For nature lovers traveling in Umbria, one of the unmissable destinations is definitely the Marmore Falls. An extraordinary sight that we owe to the hydraulic ingenuity of the Ancient Romans: in fact in the third century BC. C. the consul Curio Dentato diverted the unhealthy waters of the Velino river to those of the underlying Nera river, making them "take a nice dip" 165 meters from the Marmore cliff. Since then we can enjoy this wonderful artifice of technique!

4. Spello: from Augusto to Pinturicchio

To "bridge" the two wonderful towns of Assisi and Foligno, there is Spello, also rich in historical and artistic testimonies. It starts from the archaeological remains of the city of the Augustan age - theater, amphitheater, urban walls - to end with the Umbrian Renaissance masterpieces of the church of Santa Maria Maggiore: on one side Perugino, on the other, Pinturicchio. 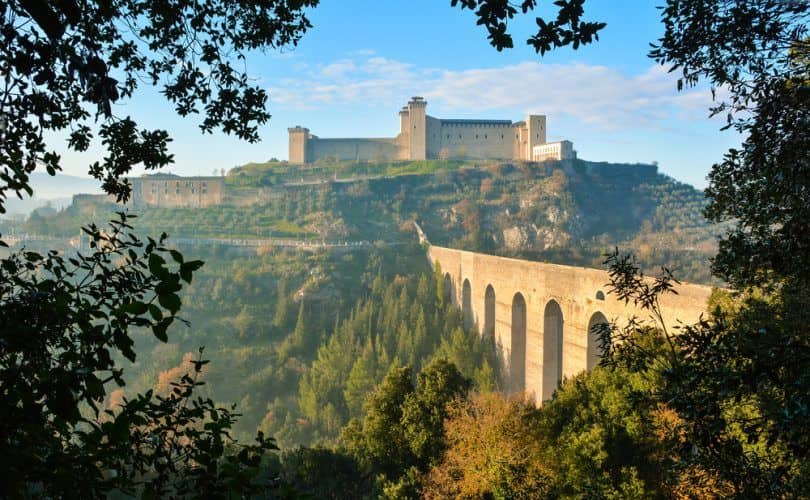 The tour in Umbria continues with another town that exudes Art and History from all pores, Spoleto, ancient and long-lived Lombard Duchy. Among the monuments to visit, we recommend the spectacular Ponte delle Torri, 230 m long and 82 m high and the Romanesque Cathedral of Santa Maria Assunta, embellished with the masterpieces of two Renaissance masters: Pinturicchio and Filippo Lippi.

2. Orvieto: from the Duomo to the Well of San Patrizio

Another pearl of the Umbria region is the city of Orvieto, of Etruscan origins. Your first stop is certainly the majestic Duomo, a perfect fusion between Romanesque and Gothic, among the most important in Italy.

Among other attractions, don't miss the Pozzo di San Patrizio, a masterpiece of civil engineering built by Pope Clement VII Medici. 62 meters deep, the well can be walked through thanks to two spiral staircases, each consisting of more than two hundred steps.

1. Perugia: the queen of Umbria

Your trip to Umbria ends with the splendid city of Perugia, the regional capital. Perugia, like its sister cities, is rich in history and culture, as its precious monuments tell, such as the Cathedral of San Lorenzo and the National Gallery of Umbria in Palazzo dei Priori. Last but not least is the Fontana Maggiore in Piazza IV Novembre, the work of Nicola Pisano and workshop, an authentic masterpiece of Gothic sculpture.