What to see in Recanati: 5 places not to be missed

Are you ready for a trip to the Città dell'Infinito -or City of the Infinity- to discover the village where Giacomo Leopardi was born?

In the province of Macerata, Recanati stands on a hill about 296 metres above sea level. It is situated between the valleys of the Potenza and Musone rivers, enjoying a privileged position. Strategically embedded between the sea and the mountains, it is known as a "balcony city" like many other towns in the Marche region. The sky echoes a spectacular panorama dominated by Monte Conero, the Adriatic Sea and the Monti Sibillini on clear days.

The earliest settlements are, in all probability, pre-dating the pre-Roman era. When the Picenes arrived, in fact, there were several settlements. In Roman times, there were two cities: Potentia and Helvia Recina (also known as Ricina or Recina). Recanati derives from the Latin "Recinetum", which is nothing more than a variation of the name Recina. The urban centre was formed around the 12th century when the respective lords decided to unite the hills of Monte Volpino, Monte San Vito and Monte Morello. Like the rest of Italy, the town went through various historical phases and vicissitudes until the completion of the Unification of Italy. Each period has left its rich imprint, proudly kept in every corner of the characteristic village.

Recanati is the home of famous personalities, including the illustrious poet Giacomo Leopardi and the famous tenor Beniamino Gigli. Here, an aura of culture and art permeates everywhere: in the monuments and palaces of interest, churches, picture galleries and museums. The local food and wine, characterised by poor peasant cuisine, is not to be underestimated. Simple but succulent dishes that preserve ancient flavours and history to be preserved. From the Vincisgrassi (a Marche version of lasagne), to the sweet and cheese pizzas typical of the Easter period and the delicious meat-based main courses. The production of hams, sausages, loins or the classic ciauscolo (dry-cured sausage) is excellent.

If we add to the above a mild climate and the friendliness of its inhabitants, Recanati is the ideal destination for your next holiday. Here is a 5-step itinerary to discover it. Are you ready? 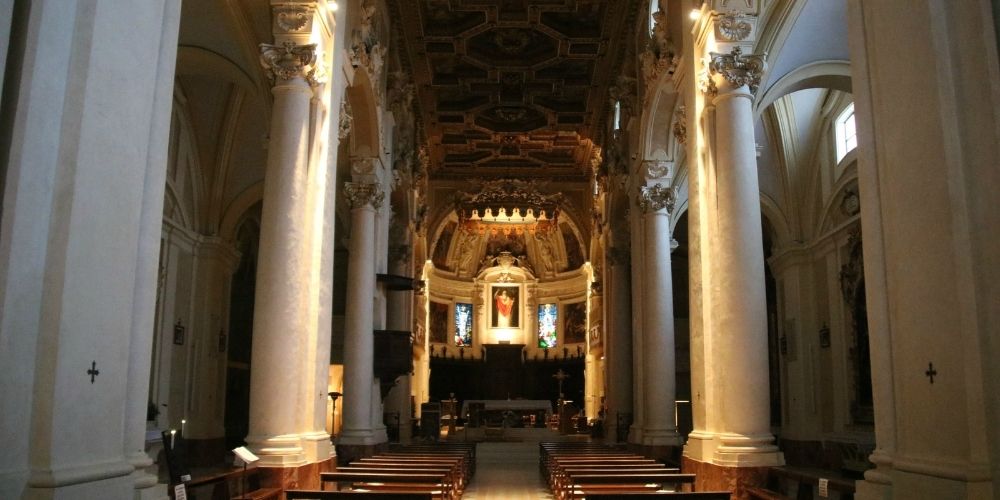 The Church of San Flaviano, Recanati Cathedral, was elevated to a minor basilica in 1805 by Pope Pius VI. Very few remains of the original cathedral, which dates back to the year 1000. The building has undergone a long process of construction and reconstruction starting from the early 12th century. It includes the Bishop's Palace and the prisons. The cathedral essentially has no façade, as it was incorporated into the bishop's residence in the 17th century. In fact, the main entrance is on the side.

The plan is divided into three naves surmounted by a wooden coffered ceiling commissioned by Cardinal Galamini in 1620. Inside are the sarcopha-gi of Cardinal Angelo da Bevagna (who was bishop from 1383 to 1412), Bishop Nicolò delle Aste da Forlì (who initiated the construction of the Sanctuary of Loreto) and, finally, Pope Gregory XII. Adjoining the cathedral is the Diocesan Museum, which houses goldsmiths' artefacts, furnishings, missal sculptures and valuable paintings from the 16th to 17th centuries. Masterpieces include a Holy Family by Venetian painter Mantegna, as well as works by artists such as Il Guercino, Guglielmo da Venezia, Ludovico Urbani, Giacomo da Recanati and Giovanni Battista Salvi. A true artistic treasure not to be missed. 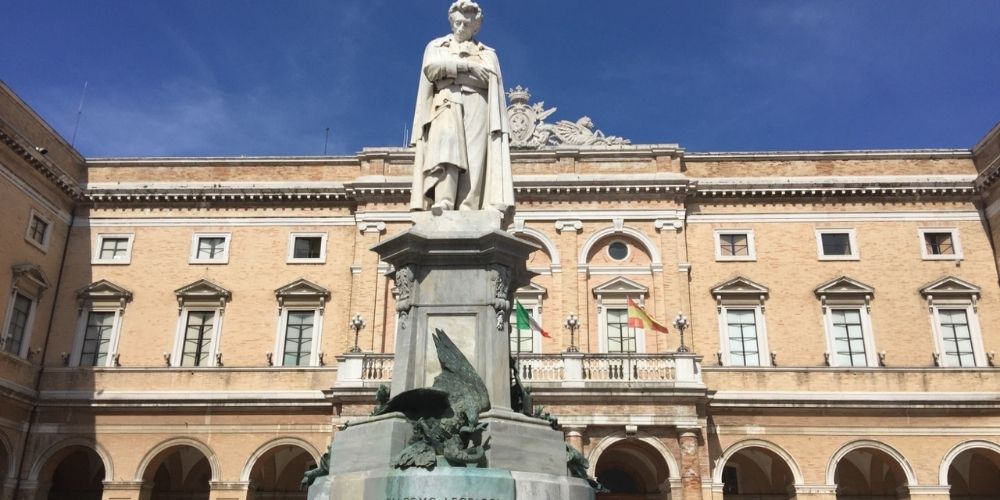 In Recanati, the museum circuit offers a wide range of proposals. The Civic Museum is located inside the majestic Villa Colloredo Mels, a noble building whose oldest nucleus dates back to medieval times. Sixteenth-century elements embellish the ceilings and vaults, such as the staircase or precious eighteenth-century paintings. The museum is spread over three floors and includes a section dedicated to Giacomo Leopardi and the Pinacotheca (located on the main floor). The latter consists of the Medieval and Renaissance sections. The fascinating archaeological, historical and modern sections are on the ground floor. There are numerous masterpieces, including books, documents belonging to the Municipality of Recanati, and works by the Renaissance painter Lorenzo Lotto.

The underground part of Villa Colloredo houses the Marche Emigration Museum. Inaugurated on 9 December 2013, the museum bears witness to the migratory experiences of over 700,000 Marche citizens who left their homeland between the 19th and 20th centuries in search of a better future. It is an exciting and evocative journey through stories and human lives.

3. The Tower of the poem il Passero Solitario

The Torre del Passero Solitario (namely, the Tower of the Lonely Sparrow), dating back to the 13th century, is located inside the cloister of the Gothic Church of Sant'Agostino. Thanks to Leopardi's poem, Il Passero Solitario, the bell tower is still famous. It was decapitated by lightning towards the end of the 19th century and is the symbol of the poet's loneliness, marginalised by society. In the renowned verses, Leopardi sees a sparrow on the top of the tower. He compares it, in his solitude, to his condition and identifies with the bird.

(meaning: from the top of the ancient tower, lonely sparrow, you keep on singing to the countryside until the day is over.)

We can experience the same atmosphere as the bucolic landscape described by Leopardi in general jubilation for the arrival of spring. Animals and humans actively participate in the season of renewal in this idyllic image masterfully painted by the poet. All except the sparrow stand back and observe the others. One can almost hear its melodious song echoing through the surrounding countryside until the day breaks.

2. The Hill of the poem L'Infinito 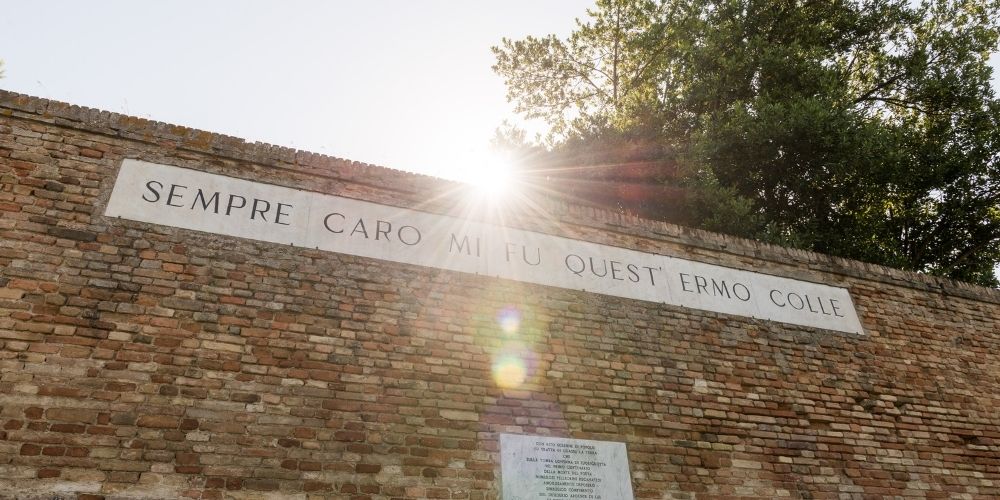 The Colle de L'Infinito, the hill that inspired one of Giacomo Leopardi's most famous idylls, L'Infinito, is a fascinating and evocative place. It is the summit of Mount Tabor, the poet's ideal refuge, from which one can enjoy a boundless panorama of the mountains that sparked the imagination of the young man who was just over 21. Today the hill is a park a few steps from Casa Leopardi and next to the Leopardian National Studies Centre.

Following a path inside the park, we can also reach where the poet found the inspiration that gave life to the Infinite. On the walk along the hill, along the boundary wall, it is possible to read the famous incipit "SEMPRE CARO MI FU QUEST'ERMO COLLE", that is "this solitary hill has always been dear to me". Here, Leopardi could find himself in his intimacy and express himself. The hedge that prevented him from having a full view triggered his imagination and reflection on the infinite concept. Moreover, it seems that Mount Tabor is also linked to the lyric Alla Luna (To the Moon). The poet often went there to admire the moon and to free his creative inspiration. 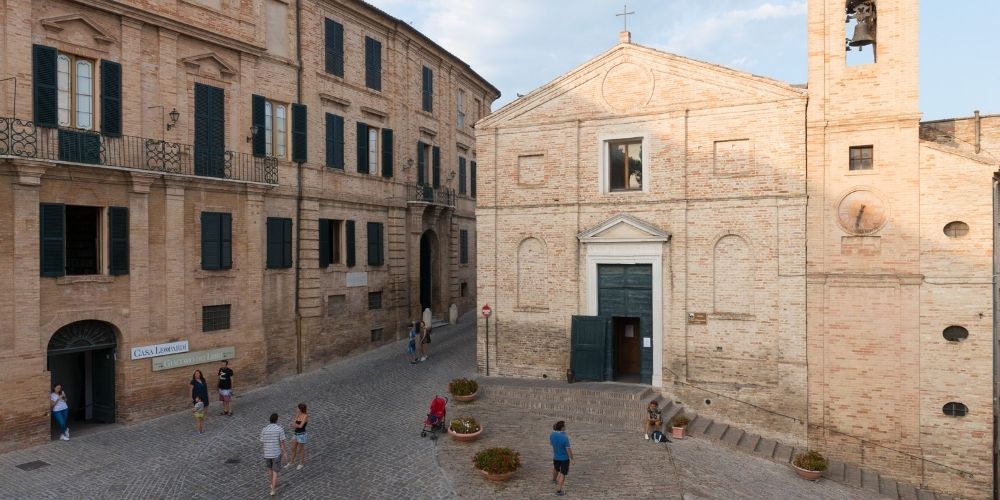 Recanati is famous for being Giacomo Leopardi's birthplace, on 29 June 1798. An illustrious figure in the 19th century, Leopardi is also recognised as one of the leading exponents of Italian literature and Romanticism, representing the true essence. As is logical, the town boasts numerous places of interest intimately linked to the famous poet's life. First and foremost is Casa Leopardi, also known as Palazzo Leopardi, the family home where the philosopher, writer and philologist was born, grew up and lived. The building does not capture our attention due to its appearance from the outside. A sober eighteenth-century style characterises it.

His descendants still inhabit the building, but you can partially visit it. You will relive the poet's places and feel the emotions he poured into his works. Since 21 March 2020, the private flats of Leopardi's house have finally been open to the public. Visiting the bedroom and discovering from which window the poet admired the moon is a fascinating experience. And again, the garden from where he could see the Sibillini Mountains, the "Blue Mountains" that he often mentions in his Ricordanze. Visiting these places is like getting to know Leopardi's most secret soul and identifying with his daily life, as well as his masterpieces.

Not to be missed is the famous Monaldo Library, with over 20,000 volumes. A place of study for the young Leopardi, it is the fruit of the work of Count Monaldo, his father, philosopher and politician. He managed to create a collection of immense proportions, especially for the time. With an example of such calibre, little Giacomo's destiny was sealed and destined for the world of culture. ust under the house, where the old cellars used to be, there is a small commemorative museum dedicated to Leopardi.In front of the palace is the square called Piazzetta del Sabato del Villaggio, named after the famous work. Moreover, Teresa Fattorini's house, "Silvia" of one of the best-known poems, overlooks the square too. You will start a unique and unrepeatable journey in an evocative atmosphere in the footsteps of a character known throughout the world.