In the heart of the Lazio region, south of the Tiber river and north of Mount Circeo, one of the oldest testimonies of the splendour of the Roman Empire, Ostia, has survived for centuries. With its surface area of about 150 hectares Ostia is, together with Pompeii, the largest open-air archaeological site in the world

The history of Ancient Ostia 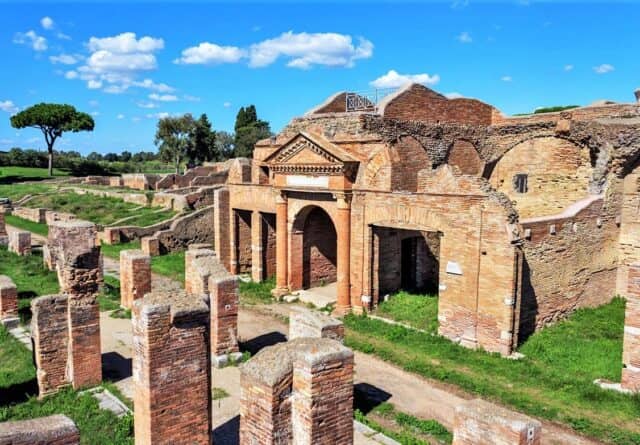 As for its date of foundation there are some uncertainties deriving from the discrepancy from historical sources: eminent testimonies of historians such as Titus Livy, Quintus Hynio and Cicero, tell us about a foundation wanted by King Anco Marzio in VII B.C., testimonies that would make Ostia the first Roman colony. But from the point of view of archaeological discoveries, at the current state of research the urban area has been dated to the third century. Contemporary historiographical research today tends to hypothesise an original foundation of Ostia which took place a few kilometres away from the present site.

According to historical evidence, Ostia was born as a port city and had its greatest political and commercial expansion especially during the imperial phase. But coming instead to the current archaeological finds dating back to the fourth century, we know that the site currently open to visitors, was initially born as a military camp - castrum - which served as a maritime military outpost for the conquest of Veio in 396 B.C. Most probably there is to suppose that the original nucleus founded in the seventh century was progressively abandoned in favor of the urban development of the military outpost of the fourth century.

Over the centuries, Ostia was at the centre of important historical events such as the sacking of Gaius Marius, and during the imperial era it was highly requalified by various emperors with the construction of theatres and aqueducts. The city saw its decline and progressive depopulation since the crisis of the third century D.C.. It was then rediscovered by archaeologists and historians in the 19th century, after having passed through dozens of centuries as a silent witness waiting to be rediscovered.

In Latin "Ostium" means "mouth of river", the ancient city of Ostia was in fact founded in the 4th century B.C. right on the mouth of the river Tiber, a place of strategic importance, hence its name. Today, however, the site is located 3 km from the sea. Visiting ancient Ostia is an experience that cannot be told, but must simply be lived. Below, some information that may be important.

First of all, some useful information to reach the site: The excavations are located in Via dei Romagnoli and can be reached from the center of Rome by car or by subway, taking line B direction Laurentina to Magliana. From here, take the train to Lido di Ostia to the stop of the same name.

The price of the full ticket is 12 euros, but there are many ways to get a discount, especially for young people and citizens of the European community.