Visit all of Italy in 15 days: Grand Tour of Italy

A special two-week tour to discover Italy's best! The Grand Tour is a journey from the North to the South, passing through the cities of art, villages and the most beautiful places in the country defined by Unesco as World Heritage Sites.

The journey you have always imagined that you have always dreamed of, that you thought was impossible, is finally here: 15 days in total in Italy, visiting from north to south all the most important centres of the entire peninsula, the most evocative villages, the most renowned cities, the fascinating natural spectacles, the historical, cultural and artistic beauties, the food, the sea, the mountains, and much more. Follow us through the Grand Tour of Italy, the wealthiest tour of Visit Italy, and discover a journey that could become a reality through our words.

Don't miss the opportunity to discover Italy from north to south in 15 days: discover the Grand Tour of Italy, the richest and most complete tour organized by Visit Italy. In total safety, consider your departure for the next holiday period and you will be cradled and pampered by the peculiar Italian welcome.

From Milan to Venice Once in Milan, you can appreciate the city of art, fashion and entertainment par excellence. You will start the tour by discovering some of the artistic and architectural beauties, such as the Sforzesco Castle at Parco Sempione's gates, the Church of Santa Maria Delle Grazie, the suggestive Navigli area, the Duomo and the square of the same name.
Then you will go on with the Galleria Vittorio Emanuele II and the nearby Palazzo Reale, the Teatro Alla Scala and the nearby shopping streets, and then move the following day to where the sea (or lagoon) reigns supreme: Venice. You can enjoy a walking tour through the city of water and discover the canals that surround the historic centre. In Venice, some unmissable stops are dedicated to the places of greatest historical and cultural importance, such as Piazza San Marco with its homonymous Basilica, the Doge's Palace and the Campanile for then continue towards the Rialto Bridge and get lost in the calli of the various "sestieri". 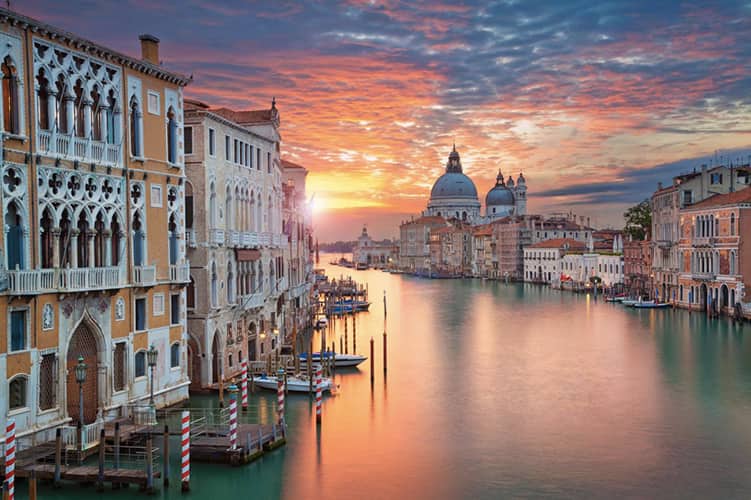 From Florence to Siena and the surrounding UNESCO beauties 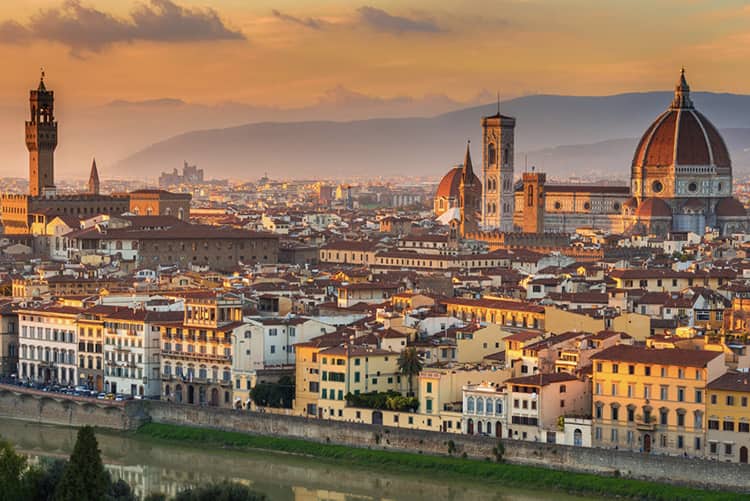 The journey continues towards the South to discover Florence and the refined art it preserves: you will visit the city centre, including the Church of San Lorenzo, Piazza del Duomo, the Cathedral, Brunelleschi's Dome, Giotto's Bell Tower, Piazza Della Signoria, Palazzo Vecchio and the Uffizi Gallery. You have always observed through a screen that will finally be tangible and observable (for real). From Florence, you will move towards Siena through the enchanting vineyards producing the famous Chianti wine and then reach the city's elegant medieval charm. You will not just look at the vineyards through a bus window, but you will be a guest of an organic winery for a suggestive wine tasting and a traditional Tuscan lunch. After lunch, you will leave for the charming San Gimignano, a small hilltop village with a coherent medieval Tuscan character and characterized by a historic centre declared a World Heritage Site by UNESCO, precisely like that of Siena and as the last city that will complete the small tour Tuscany day trip: Pisa, known all over the world for the so-called "falling tower" due to its unique and characteristic inclination, present in Piazza dei Miracoli, also declared a UNESCO World Heritage Site. 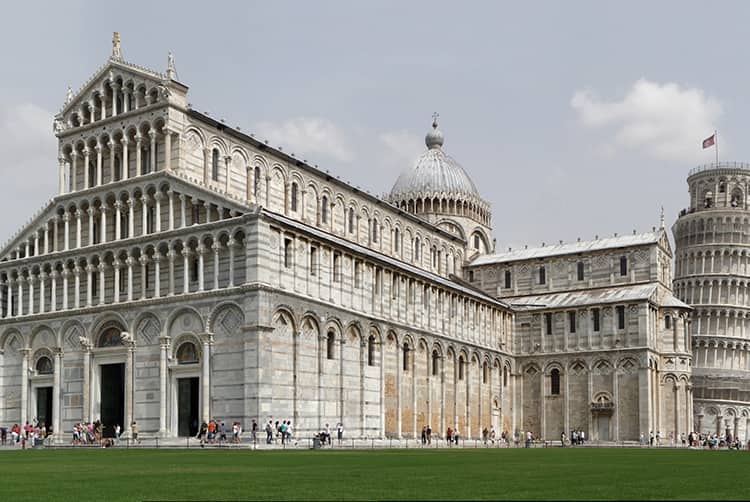 From Assisi to Rome to Naples and the island of Capri 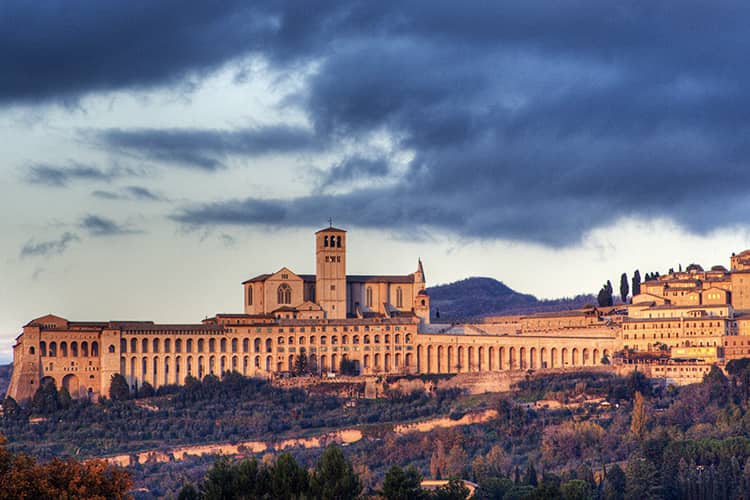 You will leave for Assisi, a town located in the green heart of Italy, famous for being the birthplace of San Francesco and Santa Chiara. Equipped with an unparalleled artistic, architectural and archaeological heritage, it is mandatory to include it in this great tour to discover Italy, dedicating a whole day to it before arriving at the eternal Rome, the capital of Italy. You will find yourself in an Imperial Rome passing through the Colosseum, symbol of the city and of Western history, and the related archaeological sites that surround it such as the Roman Forum, at the foot of the Palatine Hill. Let yourself be guided by the city passing by the Altare della Patria, the Pantheon and Piazza Navona, the Trevi Fountain and the nearby Spanish Steps, and then push yourself to the other side of the Tiber river to enter the Vatican City via Castel Sant' Angel. The following day you will go even further south arriving in Naples, which you will not visit immediately but from which you will leave to discover the island of Capri, the pearl of the Tyrrhenian Sea, a natural jewel set in the blue waters that surround it. During the visit you will cross an open-air museum path that overlooks the sea as if it were a balcony from which you can look out to admire the famous Faraglioni, naturalistic peculiarities of the island. You will have free time for a good coffee in the main streets of the island and to get lost in the small streets, noting the typical culture and traditions. 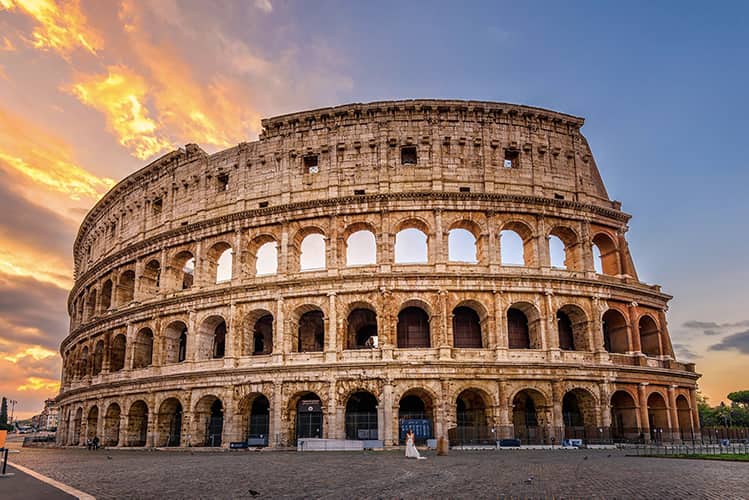 From Pompeii to Cosenza and from Tropea to Reggio Calabria After an early breakfast in the Neapolitan city, a bus will be waiting for you ready to take you to Pompeii: walking along streets dating back two thousand years ago, a tour guide will provide you with a 360-degree experience on the civilization that once resided, guaranteeing you a cultural and historical journey unique in the world. The findings of the archaeological excavations, begun at the behest of Charles III of Bourbon, are one of the best testimonies of Roman life, as well as the best preserved city of that time, destroyed by the eruption of the Vesuvius volcano in 96 AD. The archaeological park, together to that of Herculaneum and Oplonti is a World Heritage Site and the most visited after the Pantheon and the Colosseum in Rome. After more than two hours of visiting the archaeological site, you will head to Cosenza, a city in the north of the Calabria region, to explore the underrated medieval historic center that it retains characterized by enormous artistic and cultural interest. Your journey to discover southern Italy will take you to the Tyrrhenian coast of Calabria (called in this precise geographical area "Costa degli Dei"), to discover Tropea, one of the most beautiful and evocative seaside villages in Italy that this year competes for the title of "the village of villages 2021". Famous for the cliff overlooking the sea, for the Sanctuary on the promontory and the noble palaces of the historic center, it is the most visited tourist center in the entire region. The day will end with the arrival in Reggio Calabria, the Italian keeper par excellence of finds from Magna Graecia belonging to the famous national archaeological museum, which you will visit after observing the Strait of Messina from the city's waterfront. 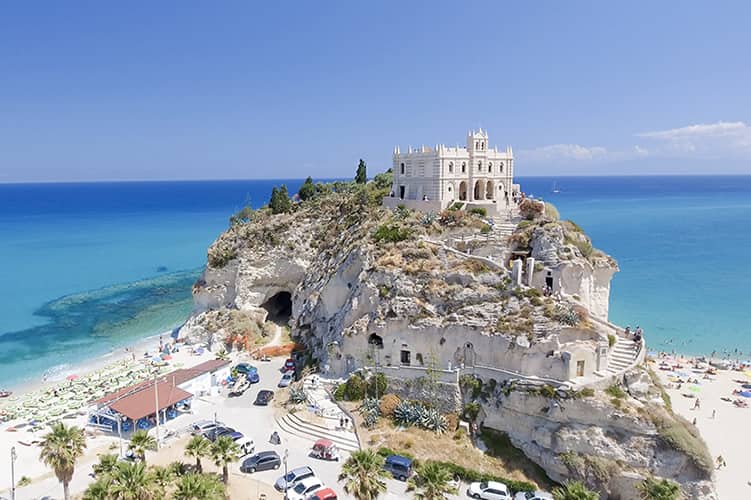 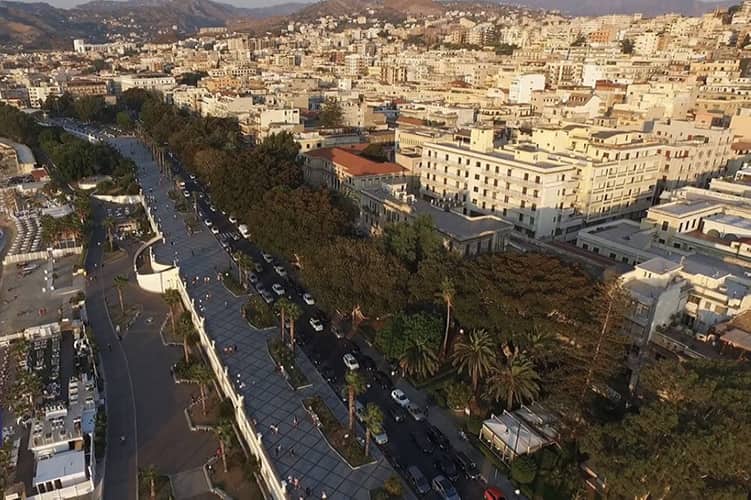 From Reggio Calabria you will move to nearby Sicily, spending two days discovering the most interesting places on the island, starting from Taormina: a place where a perfect mix of natural landscapes and historical monuments reigns, such as the ancient Greek-Roman theater, ranked as the second largest in the entire island. Characterized by a colorful city center rich in art, history and culture, you will not miss the opportunity to buy unique souvenirs of the area from the small shops. The journey continues towards Cefalù, located on the northern coast of Sicily. Belonging to the club of the most beautiful Italian villages in Italy, the town stands at the foot of a rocky promontory and is one of the most important seaside and tourist centers in the entire region. The third stop on the tour of Sicily will be Palermo, the capital of the island. Italian capital of culture in 2018 and geographically located to the west of the northern Sicilian coast, Palermo hosts a serial site declared by UNESCO as a World Heritage Site: these are nine artistic-monumental assets (two palaces, three cathedrals, four churches and a bridge ) of Arab-Norman architecture during the Norman period in Sicily, seven kept in the city of Palermo and one each in Cefalù and Monreale, a town bordering the Sicilian capital that you will visit to complete the rich tour of the island full of beauties to discover and observe. 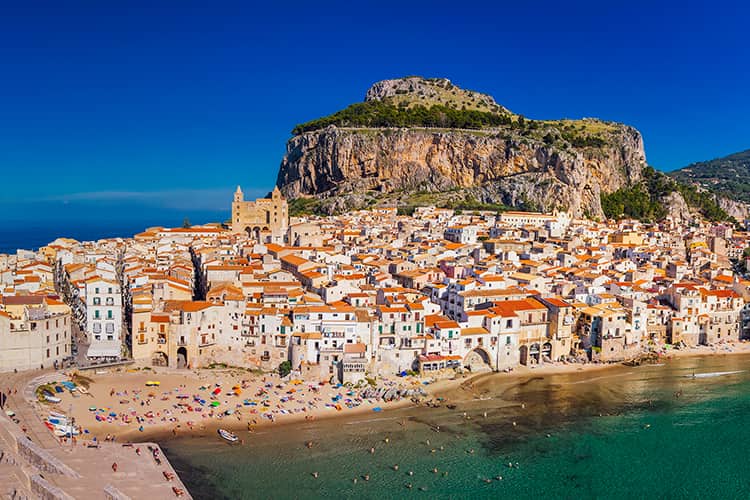 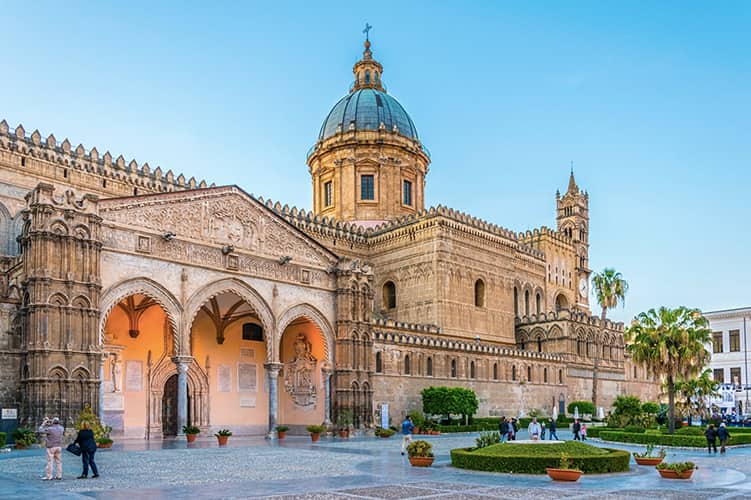 From Naples to Orvieto and from the Cinque Terre to Genoa 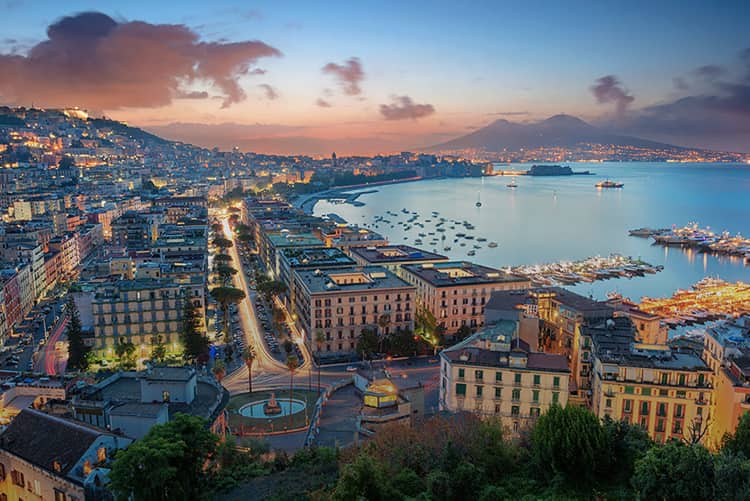 You will visit Naples starting from the symbolic square of the city: Piazza del Plebiscito, from which your pedestrian tour will begin passing through the historic center, from the Church of S. Chiara with the Cloister to the Cathedral of San Gennaro, and again from the artisan shops of S. Gregorio Armenian to the historical-monumental sites that surround them. The visit will not miss the Umberto I Gallery next to Piazza del Plebiscito, the outside of the San Carlo Theater, the Royal Palace and finally the Maschio Angioino. From Naples you will move towards the center of Italy, arriving in Orvieto, a village located on the top of a hill, at a height of about 325 meters above sea level. Orvieto is renowned for its civil architecture which is rich in the historic center, including the Cathedral of the same name, defined as an excellent masterpiece of Central Italian Gothic architecture, completed about 300 years after the start of its constructions, in 1591. The very high façade saturated with details, bas-reliefs and sculptures overlooks the square of the same name from which a historical-cultural journey begins for the entire historic center. From the heart of Italy you will move towards the Cinque Terre, a few kilometers from the border between the Tuscany region and the Liguria region. The Cinque Terre are a stretch of rugged coastline following the city of La Spezia and, in addition to having become a National Park over time, it has also become a UNESCO World Heritage Site of a naturalistic nature. The Cinque Terre places that you will not know the name of, but that you will surely have once in your life seen as, starting from east to west, Riomaggiore, Manarola, Corniglia, Vernazza and Monterosso al Mare belong to the Cinque Terre. Finally, you will move to Genoa, the Ligurian capital that conserves seventeenth-century buildings with an architectural style very similar to the English model. You will visit the historic center and then end the day by returning to where it all began, in Milan. 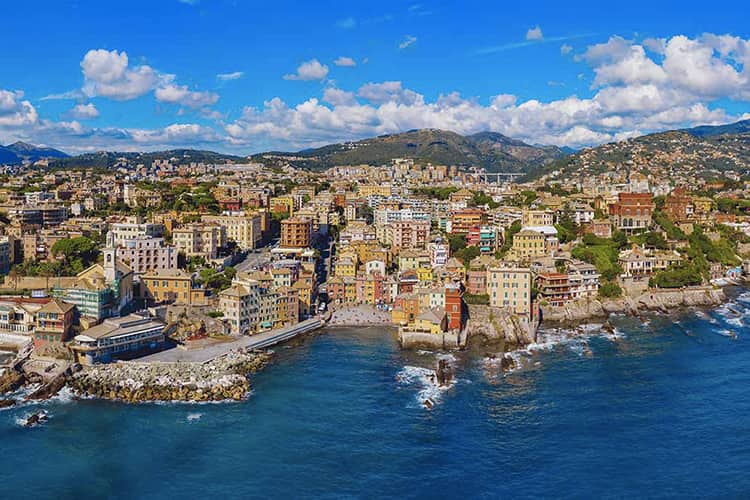