For over 2000 years the area of the Euganean Spas, immersed in the vegetation of the Euganean Hills, near Padua, has hidden the miraculous secret of its thermal treatments.

The Euganean Thermal Basin, which includes the five municipalities of Abano Terme, Battaglia Terme, Galzignano Terme, Montegrotto Terme and Teolo, with more than 130 establishments and about 240 thermal pools, is the largest and most important thermal pole in Europe. If you want to spend a relaxing vacation in contact with nature, the Euganean Spas are definitely the perfect destination.

The Euganean Spas and their origins 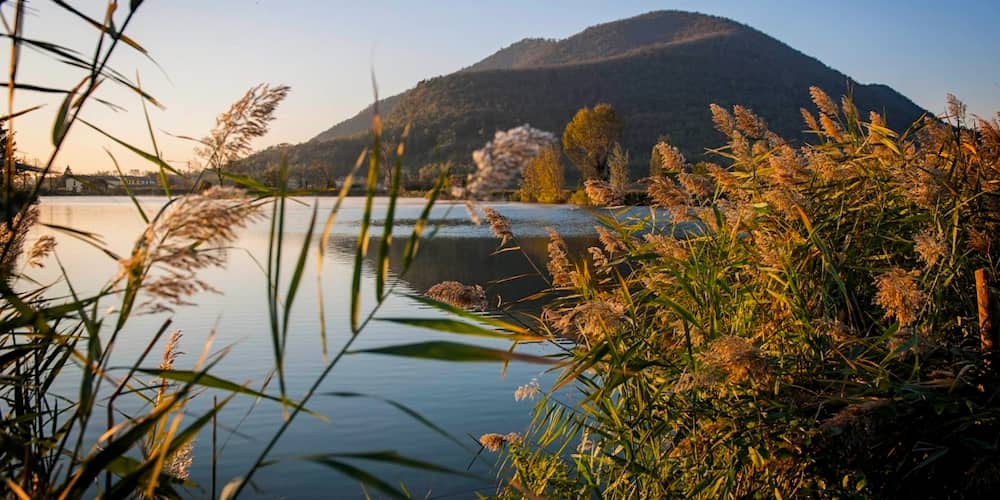 The Euganean Spas have ancient origins as since the eighth century BC in this area the ancient Venetians founded the village of Aponus. The name of the city would derive from the Venetian divinity that the ancient pagans believed lived in the thermal waters of the area, whose Latin name was, indeed, Aponus; the etymology of the word itself would be closely related to water, with the meaning of "the element that takes the pain away". At the time, the curative characteristics of these thermal waters were considered of divine nature and therefore attributed to the god Aponus, and many were the believers who gathered around a small circular lake that was present in the area, which must had been characterized by several natural hot springs collected in small lakes, to bring their votive offerings.

During the Roman Empire, the "patavinae waters" (waters of Padua) became a renowned tourist and health resort, a place to spend periods of relaxation, not only for their beneficial treatments, but also for pure pleasure and mental and physical well-being. Near the thermal springs structures for the reception and the leisure time, as theaters, libraries and villas were established. Despite the end of the Roman Empire, until the end of the sixth century the Euganean Spas continued to be very popular, then due to the Lombard invasions they fell into a long period of neglect. Only with the Republic of Venice the spa centers returned to their original glory; today the Euganean Spa, with over 130 establishments and about 240 pools, is the largest and most important spa centre in Europe.

Although the Euganean Hills are hilly reliefs of volcanic origin, any relationship between the hot waters and the Euganean volcanic phenomenon is excluded, as accurate studies have established that the waters are of meteoric nature (precipitation), which reach the ground in the pre-Alpine territory of the Little Dolomites from where they begin their slow descent between fracture systems of permeable limestone rocks, reaching depths of about 3000 meters, gaining temperature by geothermal effect (natural heating of the earth's crust as it descends towards the mantle). When they return to the surface, in the area of the Euganean Hills, they have an average temperature of 75°C and numerous mineral salts deriving from the melting of the rocks. 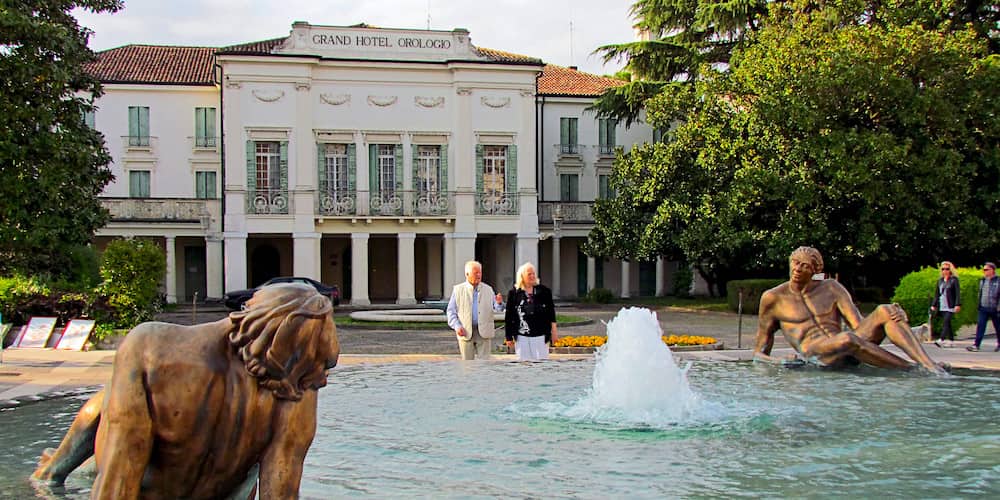 Abano Terme, the ancient Aponus mentioned above, is the most important and ancient center of the Euganean Spas and also the most renowned thermal center in Europe. It is located at the foot of the Euganean Hills, not far from Padua, and is surrounded by some of the most beautiful villages in the Veneto region. The thermal waters of Abano, known for their healing properties since ancient times, are the main attraction of the city, which, however, having been founded in the eighth century BC, is rich in both historical monuments and more contemporary works, such as its many fountains.

During your relaxing vacation in Abano Terme, between one thermal bath and another, take some time to visit the center of this beautiful town. The historic center is developed around the Cathedral of San Lorenzo, which preserves works of art of great value, and in this area there are also many patrician villas, such as Villa Bassi Rathgeb, today seat of the Municipal Museum, and Villa Trevisan Savioli, today seat of the International Museum of the Mask. Other historical buildings worthy of note are certainly the Grand Hotel Orologio and the Hotel Trieste & Victoria, seat of the Italian Supreme Command during the First World War. An important historical evidence of the ancient thermal baths of Aponus is the archaeological area of Colle del Montirone; this small hilly park during the Roman Empire was rich in thermal springs that flowed naturally at a temperature of 80°C, around which later they built villas and spa facilities. Today you can still admire its stone basins and the monumental Corinthian colonnade, of the early twentieth century, at the entrance of the park. The pedestrian area of Abano Terme, on the other hand, is the heart of the most modern Abano; it extends from Piazza Fontana to the Montirone Gardens and is the true center of the city's entertainment, full of stores, hotels and clubs. This street of the city, as well as many squares, is characterized by the presence of several fountains, symbol of the strong connection between Abano and water.

Near Abano, it is instead possible to visit several historical villages, including Arquà Petrarca, Este and Montagnana. Other places not to be missed are the Praglia Abbey and the Monumental Garden of Valsanzibio.

Spa treatments and where to stay in Abano Terme

A vacation in Abano Terme means a vacation of total wellness and self-care. The many hotels in the area, each with its own in-house spa, offer mud therapy, massotherapy, inhalation treatments and other wellness treatments. In addition to the cozy wellness areas, there are over 240 indoor and outdoor thermal pools where you can relax in the warmth of the hot waters. All spas, annexed to each hotel in Abano Terme, use Thermal Medicine, which makes use of mud and thermal water, for the treatment and prevention of a wide range of diseases, and are equipped with numerous relaxation areas, gardens, SPA, gyms and swimming pools, all accessible from your room in your bathrobe in total relaxation and privacy.

The perfect place to spend your relaxing days relaxing is in Abano Terme: Park Hotel Terme. This oasis of serenity will gently take care of you thanks to its two communicating thermal swimming pools, the Jacuzzi whirlpools in the indoor pool and the cervical jet, the Kneipp Path, two tennis courts, gymnastics courses in the thermal waters, a wide range of massages, mud-balneotherapy sessions and many other spa treatments. Located just a few steps from the historical center of the city, from here you can easily visit all the beauties of Abano. You just have to book your next vacation in this paradise of the Euganean Spas, to spend relaxing days in a special atmosphere in contact with nature.

CLICK HERE TO BOOK YOUR HOLIDAY AT PARK HOTEL TERME❯