Valentine's Day at high altitude: an experience that will make you “fly”

The story of the Valentine's Day: from its origins to the celebration of love in one of the most incredible places in the world, over 2000 meters high.

Valentine's Day: from the origins to the celebration of love

Valentine's Day is upon us: like every year, the anniversary of the celebration of lovers falls on February 14, during the cold of mid-winter that will be warmed by the love of your partner. But where does the party of lovers we know today really come from?

From 13 to 15 February in Ancient Rome it was inevitable to celebrate the "Lupercalia", holidays dedicated to the god Faun, during which the cycle of death, purification and rebirth of nature was celebrated. One of the peculiar practices of the entire festival involved women being hit by young men armed with branches, alluding to the ancestral and divine condition of free sexuality: thanks to this rite, women received a blessing that propitiated their fertility. Over the years, these rites were defined as deplorable and, from the celebration of sexuality and fertility, we moved on to the celebration of love, in a romantic, fertile sense and without explicit references, ideally associating it with the protection of Saint Valentine. The legends about the birth and evolution of the festival that we know today are many, but the connection with the fauna and flora is almost certain: the days of mid-February belong to the second half of the winter months, and consequently the first signs of "awakening" of nature, given the approach of spring; in the Middle Ages it was believed that on that date the mating period of birds began, and this event reinforced the idea of ​​considering February 14 as the feast of lovers.

The faithful love of the peregrine falcon 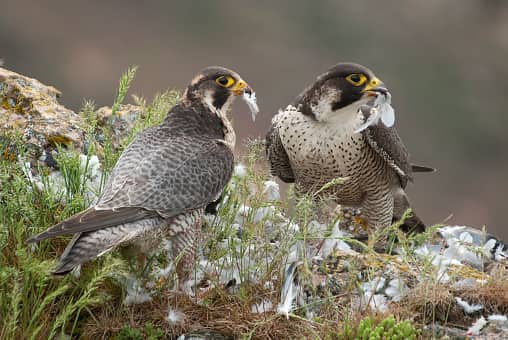 It's said that the peregrine falcon, a bird of prey found all over the world, is one of the symbols of the feast of Valentine's Day or, more generally, of the celebration of love. Called "pilgrim" for its dark color of the feathers reminiscent of the "hood" of pilgrims, it takes this name also for its wild tendency to roam the continents, given its presence everywhere except the Antarctic and several oceanic islands. Despite the love for adventure and exploration of the globe, there is one thing that the peregrine falcon would never abandon: his partner. Once they have found their soul mate, the pair of peregrine falcons will remain together for life: it's the only exception that is part of their rapacious nature. The moments of the peregrine falcon with its partner are unquestionably important, so much so that they always return to their nesting place as a sign of the highest fidelity towards the place shared with the better half and the family. 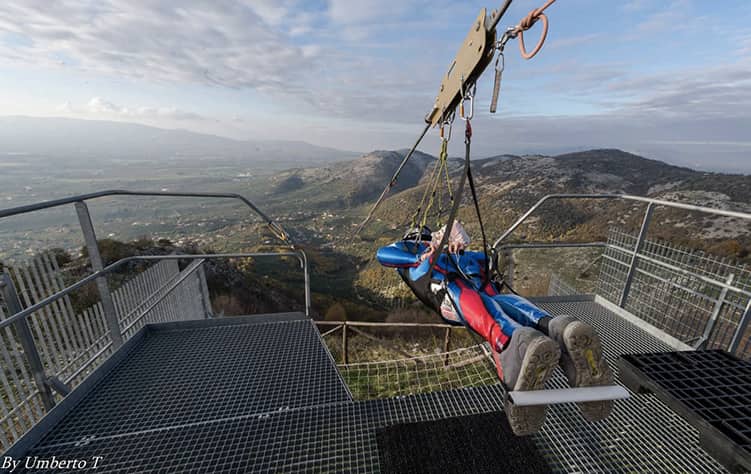 At Monte Sant'Angelo, within the territory of the Monti Aurunci Natural Park, the peregrine falcon finds a home: sunny and interesting for its caves, ravines and high overhanging rocks, the peregrine falcon nests undisturbed, and finds large valleys on which to fly in total freedom near the Castelli Romani, a group of small villages located on the Alban Hills, just south of Rome. It's here that you can experience a high altitude experience, as if you were flying with your partner exactly like a peregrine falcon. Flying in the Sky - The flight of the peregrine falcon is a zipline facility inaugurated in September 2014 that will allow you to experience the thrill of flying into the void in complete safety. Made up of a steel cable supported by two 2,225 meters long pylons suspended at a maximum height of over 300 meters, Flying in the Sky is the longest and fastest zipline in the world; exactly like the peregrine falcon, which holds the record of the fastest living animal with a maximum speed of 385 km/h that it can reach in a dive. Give your partner an unforgettable couple experience, a liberating feeling at a height of hundreds of meters, whizzing at a speed of over 150km/h; and in case you are afraid, don't fear: you will have the hand of your soul mate ready to shake yours.
It could be a good idea also for Saint Valentine or other events! 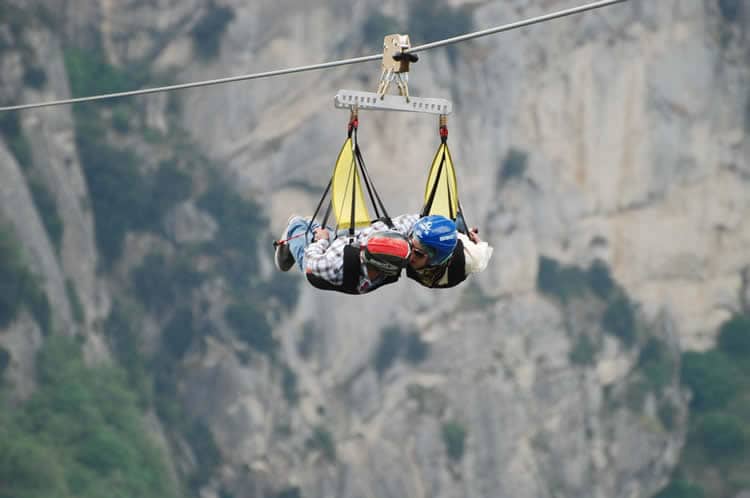 How to reach Flying in the Sky

Coming from the North: A1 Valmontone exit, direction: Artena, then Giuglianello and finally Rocca Massima;

Flying in the Sky also guarantees a car transport service from any railway station, with advance notice and equal to an expense reimbursement cost.

Discover Flying in the Sky❯