Tropea, the pearl of Calabria

Winner of the 2021 edition "Borgo dei Borghi" national award, Tropea is the most beautiful village in Italy for its crystal clear sea, breathtaking landscapes, history, culture and excellent cuisine.

Calabria is still a piece of Heaven on Earth

Tropea and the Coast of Gods 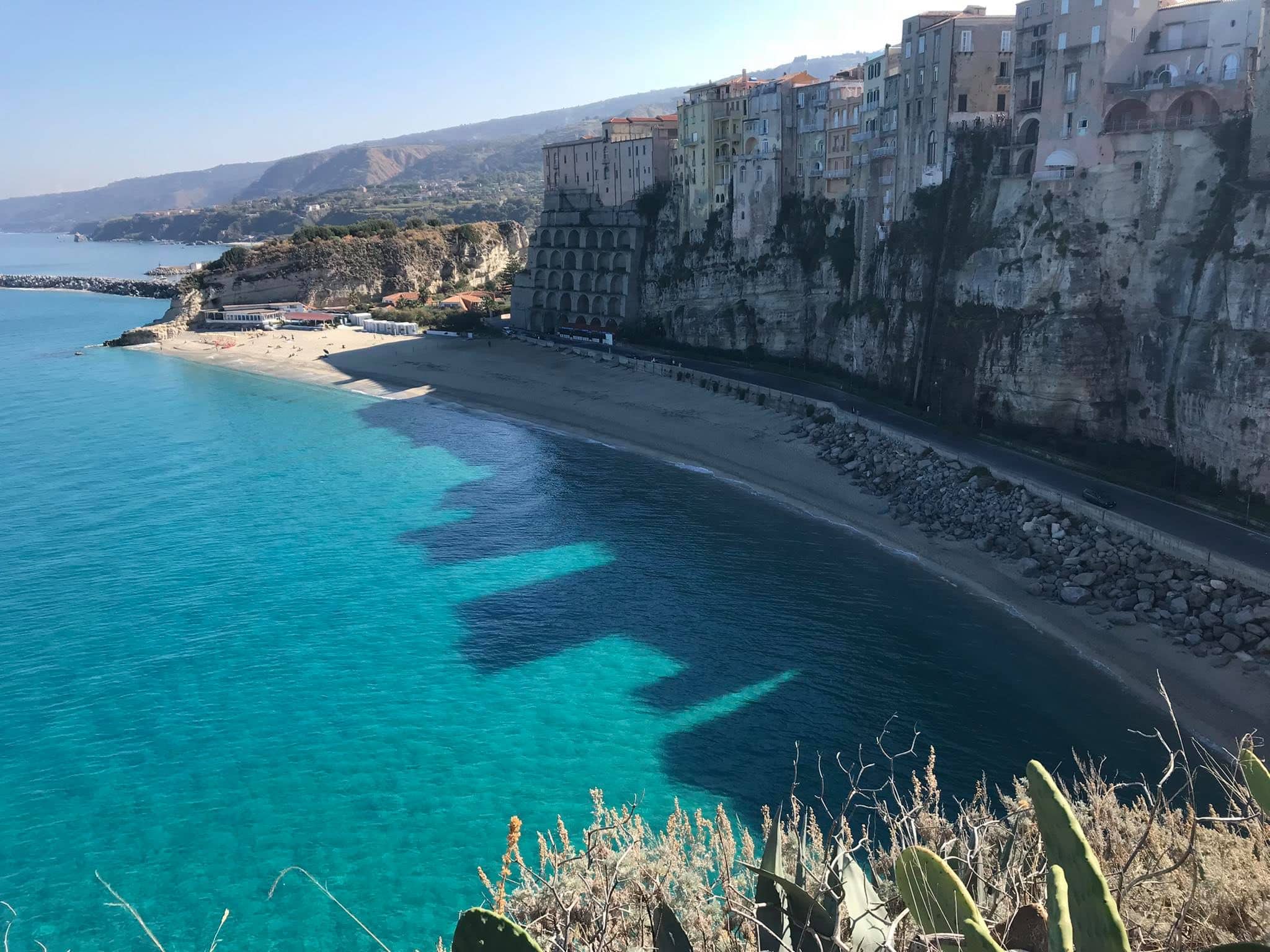 Considered the "pearl of the Tyrrhenian Sea" par excellence, Tropea is a coastal town of Calabria standing on a promontory in the province of Vibo Valentia,  embedded between the Gulf of Sant'Eufemia and the Gulf of Gioia. Located in the Tyrrhenian Calabria, which is the side lapped by the Tyrrhenian Sea, like all southern cities, it welcomes visitors with its warmth and 5-star hospitality. It is the main centre of the famous Costa degli Dei (or Coast of the Gods), which stretches from Pizzo Calabro, through Vibo Valentia, Briatico, Zambrone, Praghelia, Ricadi and Joppolo, to Nicotera, winding its way along around 55 km of coastline characterised by a  multifaceted morphology. From this stretch, we can enjoy a spectacular view of the Aeolian Islands, one of the jewels of nearby Sicily, which are only 32 nautical miles away.

Between history and legend

According to legend, Tropea was founded by the Greek hero Hercules who, on his way back from Spain, stopped at the Coast of Gods (also known as “Costa Bella”, which means beautiful coast) and turned it into one of Hercules' Ports.

However, the first traces of human settlements date back to the Neolithic period.

From the Greek historian Thucydides, we learn that the territories dominated by the three Greek cities of Ipponion, Medma, and Lokri and the territories around Tropea came into contact with Greek civilization around the 4th century BC. Indeed, the name Tropea itself has self-evident Greek origins: the term 'tropaia' (trophies) derives from the construction of celebratory monuments, which were clearly visible from the sea, in honor of Zeus Tropaìos. From the evident remains of the Roman presence (including the villa with its bath complex in nearby Parghelia), we can state with certainty that the Romans took over from the Greeks in the 3rd century BC.

Thanks to its strategic and dominant position on the promontory on which it stands, the town played a crucial role during the Roman domination, but as well as in the Byzantine era and during the Saracen occupation. However, following the conquest by the Normans the town experienced a period of flourishing development, a condition maintained even during the Aragonese power.

One thing for sure is that our "pearl" is the result of millennia of history and civilizations, and from the dawn of time, has come down to our days in its authentic splendor.

The town offers a wide range of opportunities through artistic-cultural, landscape, naturalistic and gastronomic itineraries that will not disappoint even the most demanding visitors.

The town consists of two parts, the upper and older part, which towers over a tuff rock overlooking the sea and reflected in it, and the lower part, located close to the sea and the port.

Undoubtedly, one of the symbols of Tropea is the Sanctuary of Santa Maria dell'Isola, characterized by its unique position perched on the sandstone cliff bearing the same name in front of the town. Of uncertain date, however, we know that this small island was inhabited by Greek ascetic monks and hermits, that for many years it belonged to Brazilian monks and that in the 11th century Benedictine monks lived there. It really hogs the limelight, attracting the visitor thanks to the charm of a place enveloped at the same time by both its mystical character and the colors of the sea.

There are numerous churches dating back to different periods, including the Romanesque Cathedral of Maria Santissima di Romania (12th century), which houses the sacred image of the Madonna of Romania.

The Church of Jesus was built by the Jesuits in the 17th century following the demolition of the Byzantine Catholic Church. Among its treasures, we can admire the high altar made of polychrome marble and the painting by the Calabrian painter De Matteis depicting The Circumcision of Jesus, the Nativity by Grimaldi, a well-known painter from Tropea in the 17th century, as well as paintings depicting Ignatius of Loyola and St Francis Xavier by the 18th-century Calabrian painter Pascaletti. Furthermore, the Church of Santa Maria della Neve, known as the Church of Michelizia too, also deserves a visit. As a matter of fact, it contains the Crucifixion by the aforementioned Grimaldi and a fine wooden altar. The church has been deconsecrated for years and often hosts concerts and cultural events.

Other places of worship of considerable interest are the Chiesa dell'Annunziata, in Gothic style and with its numerous ancient frescoes, and the Church of San Francesco d'Assisi, dating back to the 13th century, also containing remains of 14th-century frescoes.

The historical centre between noble palaces and craft traditions

The city centre is very interesting and here we can admire numerous well-preserved 18th and 19th-century noble palaces with their balconies overlooking the sea and their precious entrance portals, resulting from the work of expert craftsmen. A labyrinth of alleyways leading to small squares that, suddenly, overlook the sea and offer some truly enchanting views.

In this magical atmosphere, we enter the heart of an itinerary to discover craft traditions and the pleasures of gastronomy, a matter of no little importance to the food and wine traditions of Tropea and Calabria in general. Shops where master craftsmen sell their wooden, iron and terracotta artefacts, as well as fine fabrics and wicker baskets. Dulcis in fundo, it has to be said, we will discover authentic Calabrian flavours. The extra-virgin olive oil, excellent wines, the famous spicy salami called 'Nduja or the red onions from Tropea GPI - which are used to make jams and other gourmet products - are the undisputed stars.

Other traditional Calabrian specialities include “seafood delicacies”, which are fish dishes you can taste in the best restaurants and, for those who are in Tropea in July, during the Bluefish and Red Onion Festival (Editor's note: due to Covid-19 pandemic, we always suggest to check the information on the corresponding official website).

Crystal clear sea and white beaches are the ideal locations for water sports including snorkelling, diving and canoeing. Awarded the Blue Flag by the FEE (Foundation for Environmental Education) in 2020 for its wonderful turquoise sea, breathtaking coastline but especially for being one of the seaside cities that, with its virtuous behaviour, respects the criteria of sustainability of the territory and environmental protection. But that's not all, it's not the only record that Tropea can boast: first in the top 20 of the most beautiful beaches in Europe in 2007 according to the Sunday Times and winner of the 8th edition of RAI -the national public broadcasting company "Il Borgo dei Borghi" award in 2021, Tropea is a tourist destination on an international scale.

Tropea also has a modern tourist harbour, a stone's throw from the historic centre and very well equipped, from where you can set off to discover other places of the coast such as Capo Vaticano, Parghelia, Ricadi, Briatico or Zambrone.

Sun, sea, beaches, breathtaking views, history, art, culture and gastronomy ... get enchanted by the most beautiful village of Italy!