Italy is beautiful to look at in every corner from the big cities to the small villages perched on the mountains, every corner of the Belpaese brings together centuries of history and tradition that alone could be worth the ticket price. His art, architecture and culture are unique throughout the world and here I am ready to show you some of the best attractions to visit in Italy.

The Dolomites, also known as the Pale Mountains, are a part of the Eastern Alps and expand into the territories of Trentino Alto Adige, Veneto and Friuli. They are among the most beautiful mountains in the world thanks to a natural phenomenon that makes them unique: the enrosadira, which turns the peaks of the Dolomites into colours ranging from orange to purple, passing through pink when they are hit from the rays of the setting sun.

The Dolomites have several mountain complexes that offer unique beauties, from the valley to the lakes to the ski resorts.

Riomaggiore, Monterosso al mare, Corniglia, Manarola and Vernazza are the places that make up the Cinque Terre, the most pristine and beautiful place in the whole of Liguria.

The Cinque Terre coast is full of enchanting beaches and coves with wonderful breathtaking views, with a hinterland characterized by beautiful medieval villages and sanctuaries of any kind.

In Florence in the city that belonged to Dante, there is a bridge that probably even the great poet has crossed: the Ponte Vecchio. First, and for many years the only bridge that allowed to cross the Arno in Florence and which was initially enriched by butcher shops that were replaced by goldsmith shops, probably because of the Medici who wanted to make their walks more elegant.

Dominated by the corridor of Giorgio Vasari which united the Palazzo Reale with Palazzo Nitti, passing through the Uffizi Gallery, the Ponte Vecchio was built for the first time in 1177 and rebuilt at alternate ages due to floods and wars. The current configuration dates back to 1345 by Taddeo Gaddi. The Ponte Vecchio today is one of the most particular attractions to visit in Italy with its depressed arches that seem to lean gently on the river.

BOOK HERE YOUR TICKETS AND GUIDED TOUR FOR UFFIZI GALLERY❯

A stone's throw from Naples, there is a little corner of paradise: the Amalfi coast. Hundreds of breathtaking views of villages that branch out along the jagged coast that overlooks the Gulf of Naples in front of the island of Capri.

From Sorrento to Amalfi, passing through Praiano, Positano, Ravello and Maiori and Minori, all offer a bridge between the history and culture of the entire peninsula and the natural beauties that find free rein here: caves on the sea, nature trails, valleys and rivers, green areas and large protected parks.

6. Valley of the temples

In Sicily, there is a site that appears to have remained at the time of legends and gods, the Valley of the Temples. An archaeological area in Akragas, in the original core of Agrigento, characterized by a series of important Doric temples of the Hellenic period and their exceptional state of conservation.

Today it is a regional archaeological park and since 1997 the whole area has been included in the list of UNESCO World Heritage Sites and with its 1300 hectares, it is the largest archaeological site in the world.

Venice is the city built on water, so much so that it seems suspended and resting on the water, with the Grand Canal running through it all and connecting the city in various points on which gondola trips are on the agenda. Symbol of Venice, it is Piazza San Marco, known as the living room of Europe. Rich in many noteworthy works: from the Basilica of San Marco to the homonymous bell tower, to the Palazzo Ducale.
The whole square is an example of local artistic contamination to be visible even in the architecture of the city, such as the cathedral of San Marco, which represents the legacy of Roman, Byzantine and Venetian culture. The Campanile is one of the architectures to which the Venetians are most attached. 99 meters high, it offers a beautiful view of the entire lagoon and the Murano islets. Book here Tickets for St. Mark's Basilica: Skip The Line + Guided Tour❯

Among the beauty of Tuscany, there are unique landscapes, besides Florence, there is Pisa with its beautiful field of miracles. The famous square of Torre Pendente, an icon for Pisa and all of Italy, is the bell tower of the cathedral of Santa Maria Assunta, 57 meters high with blind arcade turns and six floors of loggias in a completely Romanesque style. The slope is due to a failure of the ground. In addition to the Tower in the field of Miracles, there are other works of art and architecture unique in its kinds, such as the cathedral and the baptistery, which still today are true examples of Romanesque and Gothic architecture.

BOOK HERE YOUR EXPERIENCE FOR THE LEANING TOWER ❯

3. The Duomo in Milan

Milan Cathedral, called Duomo, is found on the square of the same name and is an icon of the city of Milan. A stone's throw from the Galleria Vittorio Emanuele II it was built, as we know it, in 1386 and completed about 500 years later, the Cathedral stands in a sacred place, that is where the ancient temple of Minerva stood.

Given that the works lasted about 5 centuries, the Duomo does not react to a precise style, even though it mostly approximates a neo-gothic style, with its facades entirely covered in white marble and surmounted by dozens of spiers on the highest of which is the famous sculpture of Madonnina, totally covered with gold, overlooking Milan and is the symbol of the city. 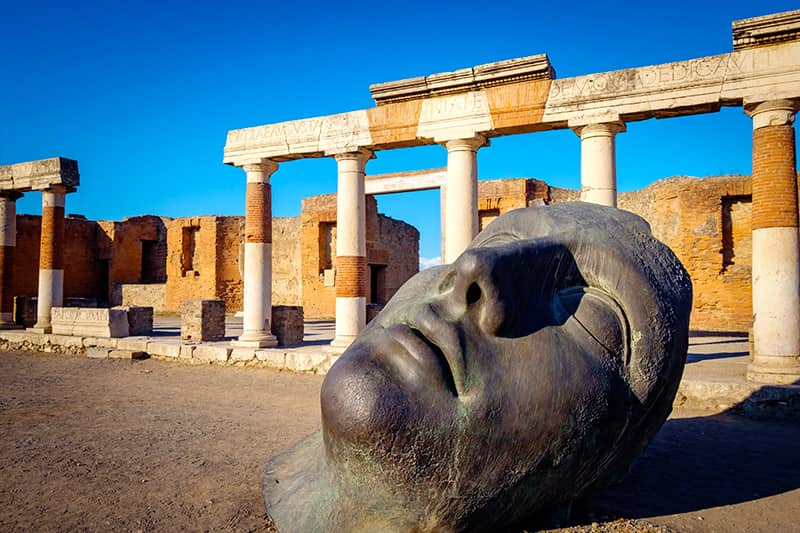 A few kilometres from Naples there are two giants of world archaeology: Pompeii and Herculaneum, two boundless cities buried under the ashes, which kept them for two millennia and made sure to get them to the present day.

Pompeii is the largest open-air archaeological complex in the whole south that already during the Roman era was a large city with an active cultural and political life. Still, today visiting the excavations you can experience the Pompeian life through its architecture.

Herculaneum, on the other hand, was a city full of wealthy villas and buildings that are still buried under the new city. 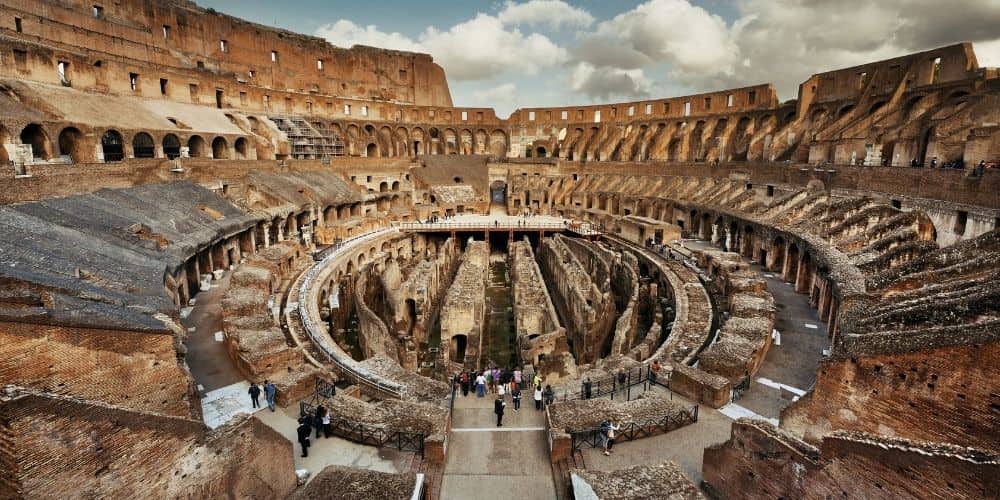 The Colosseum, an example of the glory and grandeur of the Roman Empire and symbol of the whole of Italy in the world, is the largest amphitheatre ever built in antiquity and which still today rules Rome over almost two thousand years.

It was built during the empire of Vespasian, and has the capacity of a modern football stadium. Built over 10 years on the remains of Nero's Domus Aurea, it consists of 4 rings of overlapping arches initially covered in travertine for a total height of 50 meters and a maximum width of 188 meters. Since the 1980s it has been part of the UNESCO world heritage site and since 2007 it has been included in the new seven wonders of the modern world.

BOOK HERE YOUR TICKETS FOR THE COLOSSEUM ❯