The Thermal Baths of Pré-Saint-Didier: wellness in the mountains of Aosta Valley

The hot springs of Pré-Saint-Didier were already known to the ancient Romans; a first spa was built in 1770, but the structure we see today was built only in 1834. The healthy waters, which gush near the famous Orrido waterfall, are an authentic cure-all for tourists and the view of the the majestic Mont Blanc that you can enjoy from the outdoor thermal pools is just incomparable.

The municipality of Pré-Saint-Didier is located in the autonomous region of Aosta Valley, precisely in the Valdigne, the upper valley of the Dora Baltea. The hot springs of Pré-Saint-Didier were already known during the Roman Empire, when the village was called "Arebrigium", but they were not exploited until the second half of 1600. Instead, the historic resort was constructed in 1834 and for more than 150 years the hot springs had been one of the main attractions of the Italian royal family. Due to the two great World Wars the thermal baths of Pré-Saint-Didier lost their popularity and in 1976 the resort was definitely closed. After about thirty years of inactivity, in 2005, the building was restored and reopened, increasing the number of tourists and enhancing in this way the local economy.

The history of the thermal baths 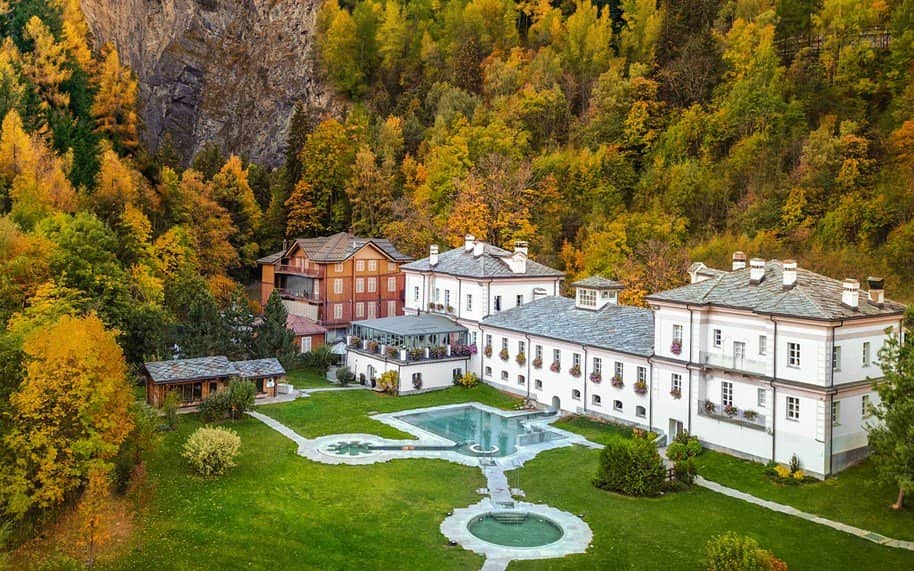 Pré-Saint-Didier is situated at the point of confluence between the La Thuile Valley and the Dora Baltea Valley. The glacial erosion, which dates back to ten thousand years ago, resulted in the formation of a majestic waterfall that over time wore away the rocks creating the gorge of the Orrido di Pré-Saint-Didier; the hot springs flow out naturally from the gorge at a temperature of 38°. The heat makes mineral salts, which are contained in the rocks, melt giving the water important healing properties.

The benefits of the hot springs were already known during the Roman Empire; indeed, it seems that in the area between the current resort and the public swimming pool, in the past, they had found ruins attributable to ancient Roman thermal baths. Anyhow, the first written proof is a document that dates back to 1560 concerning the concession of a fief by the duke Emanuele Filiberto of Savoy to Claudio di Léaval, heir of a noble and ancient family originating from Morgex and owner of the hot springs since 1400.

The first resort dates back to 1770, when the management of the thermal baths was under the control of the Conseil des Commis, the main administrative organ of Aosta Valley at that time, and it was located near the gorge, just over the bridge. Later on, in 1834, they constructed a new spa resort near the village that was more functional and well equipped: the historic resort that is present even now. This building then became property of the lawyer Perrod di Pré-Saint-Didier until 1887, when the Societá Generale Anonima Termominerale Italiana acquired it, giving lustre to it through many extension works and the construction of a small casino realized in Art Deco style, with dance halls, pool halls and a restaurant; nowadays this latter building is part of the new thermal structures.

The two World Wars put a stop to the vacations of the noble families linked to the Italian royal family at the thermal baths of Pré-Saint-Didier and, although the region of Aosta Valley acquired the resort allowing it to remain in business for about twenty years more, in 1976 the resort shut down. After, approximately, thirty years in a state of abandon, in 2005, the resort was restored, although sticking to the original structure, and reopened, starting a new chapter for the thermal tourism of the region.

The hot water, coming from the Dora Baltea, is rich in iron and mineral salts, such as silicon, arsenicals, iron oxides and calcium carbonate, which have different benefits, softening your skin, increasing your circulation and allowing freer movement. The thermal baths of Pré-Saint-Didier offer to their guests several offers. Three outdoor thermal pools, various whirlpool baths of all kinds (waterfalls, to relax the back muscles and the shoulder muscles, whirlpool tubs to tone up the back and the glutei, and water jets to increase the microcirculation), saunas and steam baths, sensorial tubs, music therapy tubs, Kneipp water therapy path, Vichy showers, footbaths and different relaxing rooms. What clearly characterizes and makes unique this resort is the breathtaking view of the Mont Blanc that you can enjoy from the outdoor thermal pools.