The Seriana Valley and Gromo, one of the most beautiful villages in Italy

In the heart of the Alps, there is a small ancient village in the beautiful setting of the Val Seriana: Gromo. This enchanting village is one of the most beautiful villages in Italy. Let's find out why.

Gromo is a beautiful mountain village nestled in the rock that offers visitors many unique views and glimpses throughout the valley. Compared to other Alpine valleys, the Seriana Valley is extensive, a perfect choice if you want to admire a majestic mountain landscape that stretches as far as the eye can see. Gromo, in particular, as well as being a characteristic place, is also the perfect starting point for exploring this magnificent valley. Let's set off together then for an exciting bird's-eye view over the Alpine peaks, starting from Gromo and climbing up to the high mountain pastures and finally landing beyond the confines of the world, in a magical place that goes by the name of Santa Claus Village! 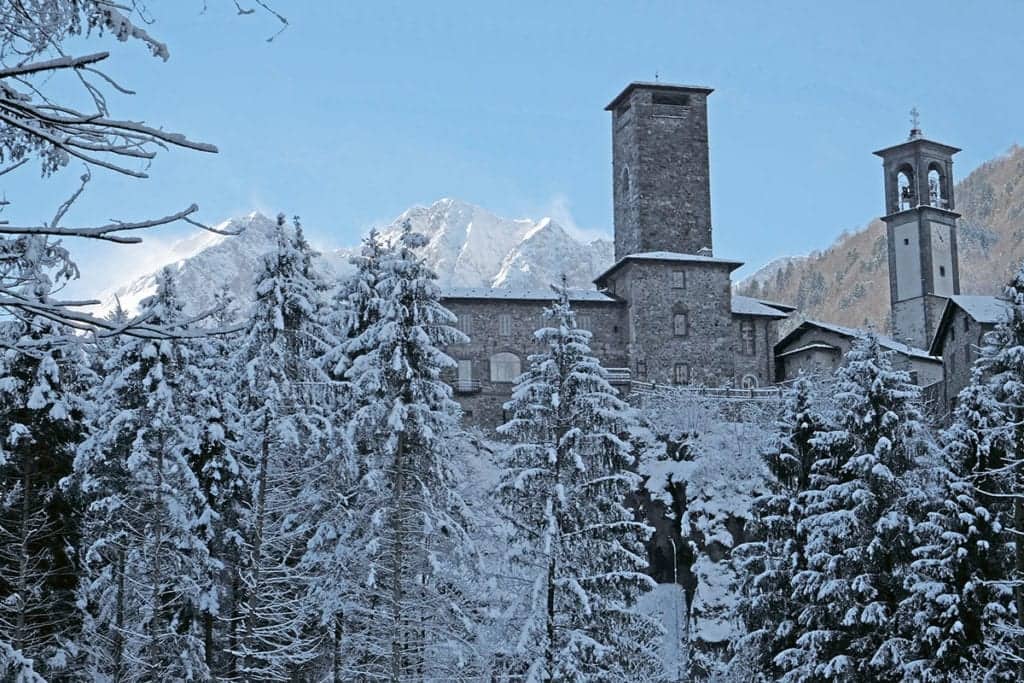 Observing Gromo from above, we immediately realise that it is a typically medieval village. Among its alleys, we can see numerous handicraft shops in the places where the ancient workshops once stood. The blacksmith's forge has given way to an ironmonger's shop: in this place, in ancient times, were produced white weapons of the highest level, so much so that Gromo is compared to the Spanish city of Toledo. Today we can visit the White Arms Museum, an ancient legacy of that era, and the interior of Palazzo Milesi, where in addition to the weapons, there are historical parchments.

Flying over the streets of Gromo, we immediately notice that it is characterised by rustic grey stone: the buildings are essential, majestic, and on the mountainside, there are princely villas with gardens populated by statues and colourful flowers flourish.

We glide over the church of St James and St Vincent, where we marvel at the delicate 16th-century frescoes in the chapel: a spectacle of elegance and colour. We realise that our wanderings have taken us close to Piazza Dante, the old market square, where the majestic Ginami Castle stands. We fly over it. 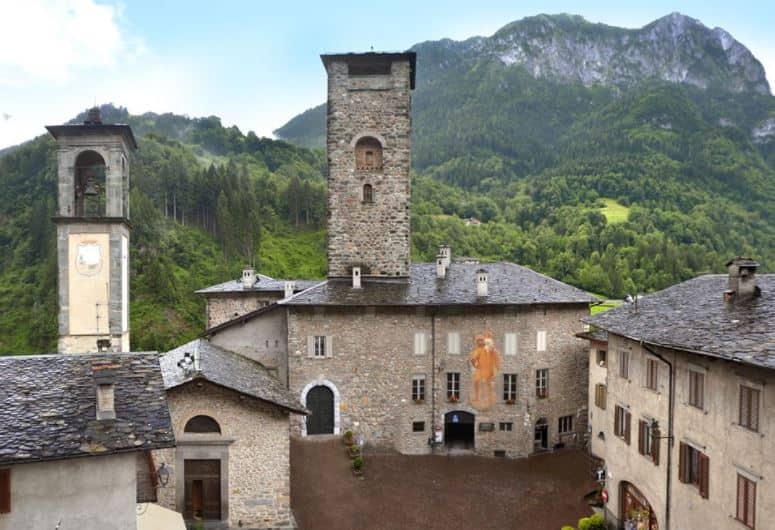 The first thing that jumps out from the noble Castle is the gigantic armoury tower that towers imposingly into the sky, a reminder of the military past of this place. The massive fortress is from the 13th century by the Buccelleni family to protect the neighbouring silver mine. Looking at the Castle from above, we can fully appreciate its unique position: perched on an impregnable rocky spur, saved to the east by the escarpment that ends in the Serio river and to the west by the mighty drawbridge. On the façade is a giant painting of St Christopher, probably painted to conceal some damage done to the walls.

All this flying and flying over the beauties of Gromo has made us hungry: fortunately, in the restaurant at the Castle, we can refresh ourselves with a generous plate of Casoncelli, the local speciality, and a good glass of Nebbiolo. Refreshed after the rich meal, we leave Gromo and continue our overflight making a diversion eastwards to climb in altitude and reach the Spiazzi del Gromo, a place where fun is guaranteed! The Spiazzi becomes a beautiful ski slope in winter with modern ski lifts leading up to the Vodala hut. All that remains is to decide what to do: snowshoeing, bobbing or snowboarding! What if the cold weather passes and spring arrives? Don't worry! Gromo's Spiazzi is home to one of the most beautiful Adventure Parks in the whole of the Alps, with routes for both adults and children. If we find ourselves in that romantic autumn, the Spiazzia di Gromo becomes the ideal setting for a walk in the woods, surrounded by colourful leaves and fragrant mushrooms. Let's sharpen our eyesight; we might catch a glimpse of some deer!

After these intense hours dedicated to fun, all that's left to do is continue our adventure of discovering the Seriana Valley, heading north To continue our flight over the Seriana Valley, we must first retrace our steps on the main route up the valley. Arriving at around 900 metres, we come across a village called Valbondione: this is where our trek starts to reach the waterfalls. The Serio waterfalls do not flow all year round; they are only open during the summer months for five events, four of which are during the day and one at night. To reach the optimal viewpoint to admire the spectacle of the opening of the waterfalls, you can take the CAI 305 path (an easy mule track) or the easier CAI 332.

When we arrive at our destination, we land on a beautiful meadow in front of the rock face. Suddenly we hear the sirens going off, signalling the opening of the falls: the emptying of the dam starts slowly, and we see the water coming down slowly, almost without haste, as if we were in a film and this was a key sequence shot in slow motion. The roar of the water descending is overwhelming and makes us feel part of the immense force of nature that expresses itself in all its unbridled beauty. Continuing along the road that crosses the Seriana Valley, we climb further up to get to the bottom of the valley, right in front of Pizzo Coca. Here we feel as if we have landed inside a cartoon, particularly that of Heidi, the little girl who lives a thousand adventures in the company of her goats, trotting with them up and down the mountains. The meadows are emerald green, the cows graze peacefully, and the goats play with each other. The Serio river flows merrily through the valley, leaping happily from one boulder to another, still young and unconscious, with little water to look after. And there, at the bottom of the valley, is the destination of our flight, the fantastic alpine hut! Here, on weekends during the summer months, we can visit the Alpine soldiers. They spend their days cooking grilled meat, drinking bitters made from mountain herbs and preparing the famous Bergamo polenta in traditional copper pots. During these unforgettable days, the air is filled with music and the scent of typical mountain food, the children run merrily across the meadows, and the mountains sing with joy, showing themselves at their best. Rattles jingle, children clap their hands happily, and the air is filled with that unmistakable laughter that at this time of year can only mean one thing: Father Christmas! Have we had a magically flown to Lapland? Perhaps on the back of a reindeer sleigh? Of course not! We have just returned to Gromo to visit Santa's House of Bergamo!

In its fourteenth edition, this fantastic initiative is located in Palazzo Scacchi Filisetti, an ancient patrician building in the centre of the town. Among its rooms, still decorated with the original centuries-old furniture, we find the home of the Elves who help children write their letters to Santa Claus. All along the way, the children are given lots of Christmas-themed presents, which makes us desperately want to be little again!

We look out of the window and WOW! The whole village of Gromo is dressed in Christmas theme, the streets are full of Christmas markets, and lights illuminate the streets of this beautiful village, definitely one of the most beautiful in Italy.