The most beautiful villages in the hinterland near the Riviera Romagnola

With its unmistakable seafront, lively nightlife and festive aura, the Riviera Romagnola is one of Italy's favourite holiday destinations and holds a rich tradition of history, art and culture. Here you will discover timeless borghi and the genuine and friendly hospitality of the locals. Check out our selection of the most beautiful villages

Venture back from the Riviera romagnola, and you will discover gentle hilly landscapes and charming old towns where time seems to stand still. Among them is the imposing and majestic San Leo. Situated 35 kilometres far from Rimini, this fairy-tale village stands on a rocky cliff overlooking the surrounding valley. Reaching San Leo by car, you will probably have the feeling to be in a wonderfully familiar place. Its mighty fortress, perched on a limestone cliff 583 metres high, gives this village the unmistakable silhouette similar to some fantasy book illustrations. A land of conquest for many feudal powers, San Leo boasts a past as the capital of Italy (under Berengario II’ kingdom) and over the centuries has welcomed (and sometimes imprisoned) illustrious and charismatic figures of Italian history, like Dante Alighieri, St Francis of Assisi, the legendary Count Cagliostro and the revolutionary Felice Orsini. Passing through the town gate of Porta di Sopra, you can walk along a maze of stairways and cobbled streets. Look around and admire the beautiful Romanesque and Renaissance buildings that populate the borgo, the Church of the Madonna di Loreto, the Pieve di Santa Maria Assunta (the oldest religious complex in the Montefeltro area) and the Palazzo Mediceo. Near the Duomo di San Leone, the Parco Belvedere is an excellent vantage point where you can enjoy the view over the surrounding valleys. After a visit to the village, reach the Fort on foot or by shuttle bus. You can enter the interior and visit the weapons exhibits and the cells of its most famous inmates. A taste of the local cuisine is a must. Also, try the local herb liqueur traditionally attributed to Count Cagliostro.

West of Rimini, in the heart of the Marecchia River Valley, stands a beautiful medieval town with an ancient and fascinating history. Verucchio is a significant centre of the Villanovan-Etruscan civilisation and is also known as the cradle of the Malatesta: it was the first place where the powerful noble family established its rule. Numerous finds dating back to the Iron Age have been brought to light around the area and are now on display at the Museo Civico Archeologico. The elegant Piazza Malatesta is the centre of the old town: from here, you can wander through narrow streets and alleys and reach the Collegiate Church, which houses valuable works of art, and the Rocca del Sasso, where you can enjoy a view over the villages of Passerello, Sant'Andrea and Sant'Antonio. Other points of interest are the Rocca del Passarello (a former military fortress turned into a cloistered convent), the Romanesque Parish Church of San Martino, and the Franciscan Convent with its centuries-old cypress tree planted -- according to lore -- by the saint of Assisi. As for food, taste the excellent extra-virgin olive oil from the Marecchia Valley and the typical "Veruccese", a red wine produced from an ancient local vine. Ideally, you should plan your visit for a clear day, the best condition to fully appreciate the view embracing the Marecchia Valley and the Rimini coast.

A City of Art since 1984, Santarcangelo di Romagna is a village ten kilometres from Rimini that we recommend you visit not only during the summer. This medieval town is an alternative to overtourism and a pleasant destination to choose for getaways and mini-breaks throughout the year. The village stands on the Colle di Giove, a mysterious mountain crossed by suggestive caves dug into the tuff, whose origin and use are still uncertain. Perhaps cellars, perhaps places of worship, it is now possible to visit some of these rocky ravines. The maze of narrow streets and steps that unravel from the town centre run through a village rich in architectural treasures: the 1777 triumphal arch built in honour of Santarcangelo's Pope Clement XIV, the Torre del Campanone, Piazza delle Monache, Porta Cervese, the Collegiate Church, and the Parish Church of San Michele. The imposing fifteenth-century Rocca Malatestiana is the perfectly preserved residence that dominates the borgo and characterizes its profile. As for the surroundings, Poggio Torriana is a short distance from Santarcangelo. Highlights include the 13th-century noble mansion of Palazzo Marcosanti, the mills of Valmaricchia, and the Rocca dei Guidi di Bagno, where the ghost of Azzurrina (the feudal lord's little daughter who mysteriously disappeared in 1375) is said to haunt the rooms of the castle. 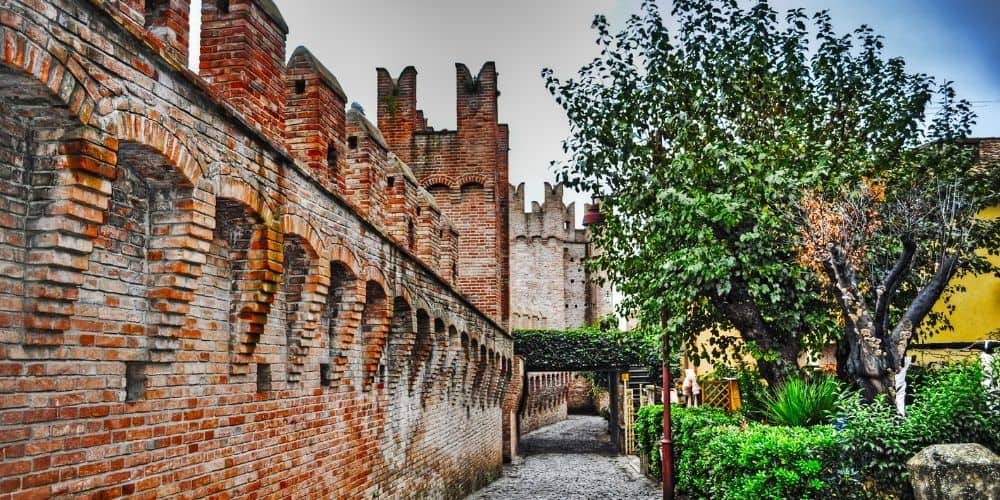 A few kilometres from the Riviera Romagnola, Gradara is one of the most beautiful villages in Italy and has been an Orange Flag town (a recognition of tourist-environmental quality awarded by the Italian Touring Club) since 2004. This town in the Marche region was the setting for the love story between Paolo and Francesca narrated in Dante's Inferno. Laying on a 142-metre hill, Gradara stands out for the grandeur of its two perfectly preserved town walls. The outer ones host the ancient Ronda walkways and run for about 800 metres, alternating 14 crenellated, square and inner-crowned towers. The powerful De Griffo family realized the 12th-century keep, while the Malatesta built the castle and walls between the 13th and 14th centuries, buildings that strongly marks the current appearance of Gradara. While the Fortress is the best known and most visited point of interest, there are many monuments and corners of the town that are worth a visit: Palazzo Rubini Vesin, with its fine halls rich in stuccos and frescoes; the Church of San Giovanni Battista, which houses a valuable 16th-century wooden crucifix, the Olive Garden; the Museo Storico and the Bosco di Paolo e Francesca. If you want to taste the local cuisine, try Tagliolini con la Bomba, a traditional recipe whose unusual name refers to its preparation. Not far from Gradara, in the Park of San Bartolo, lies the archaeological area of Colombarone, where excavations have brought to light a late antique villa, the Christian basilica of S. Cristoforo ad Aquilam, a cemetery area, and a parish church.

Don't miss a visit to the oldest republic in the world. San Marino, a Unesco World Heritage Site since 2008, is only 20 kilometres away from Rimini and can be easily reached by bus. There are many things to do and see immersed in the medieval atmosphere of its streets overlooking the Adriatic coast, including castles, museums, monuments, shops and characteristic markets. The main entrance to the city is the Porta di San Lorenzo, from which you can start your tour of the historic centre. Proceed along an uphill street to Piazza del Titano, where you can visit the Museo di Stato. From here, continue to the scenic Piazza della Libertà, the centre of the political life, dominated by the Palazzo Pubblico. The principal sacred building of the small state, the Basilica del Santo, preserves the remains of San Marino, the founder of the community. Among the most evocative and impressive landmarks, the three towers -- the Guaita, the Cesta and the Montale-- are a must-see. These fortresses feature the super panoramic Sentiero delle Streghe, which is an unmissable path shrouded in mystery. According to legend, young witches in feline guise used to run through the trail that links the castles. Another way to reach San Marino consists in taking the scenic cable car near the P11 car park, which will give you a spectacular view above the hills below. Before leaving, treat yourself to a taste of the typical cuisine. Piadina, Polenta, and Strozzapreti are excellent here, and for dessert, try the Pagnotta, the Bustrengo and the Torta tre monti.

Where can you stay to visit these marvellous villages?

The hinterland of the Riviera is a land rich in art and culture that will amaze you not only for its authenticity and beauty but also for the friendly and relaxed atmosphere of its villages and landscapes. It is a territory that has not altered its noble and proud soul, a legacy of its past as a protagonist of Italy's history. To make the most of your journey and live the famous Romagna hospitality, find the right place where to stay and chose comfortable facilities just a few steps away from the sea, such as those provided by the Bianchi Hotels in Valverde di Cesenatico, San Mauro Mare, Gatteo, Bellaria and Igea Marina. The Bianchi family has been involved in welcoming its guests for four generations with passion and professionalism. They will gladly help you to enjoy your holiday, whether you are planning a quick "escape from the city" or want to allow yourself a few more days to explore the beauty of the Riviera Romagnola. Bianchi Hotels offers its guests various packages to meet the most varied needs, from relaxing holidays to sports and business tourism, with excellent value for money and all-inclusive packages with beach service. More than 30,000 families have already chosen the Bianchi Hotels for their holidays, relying on the enthusiasm and competence of the Bianchi family.