The most beautiful towers in Tuscany

Towers are one of the most characteristic aspects of Tuscan architecture. During the Middle Ages and the Renaissance, in many Italian cities were built towers and bell towers, both for military or public purposes,as well as a symbol of wealth and nobility. In Tuscany there are some so famous that they are symbols of Italian art all over the world. Let’s take a look at the most particular ones.

Giotto’s bell tower is one of the symbols of Florence. It testifies to the development of the Gothic architecture in 14th century. It is located in Piazza Duomo and is the bell tower of Santa Maria del Fiore, that is the Cathedral of the city. Its construction began in 1298 and from 1334 Giotto started working on it. Despite the death of the great master only 3 years later, his design was respected until the completion of the bell tower in 1359. The exterior decoration in Giotto style makes it an almost pictorial work and, according to many, makes it the most beautiful bell tower in Italy. 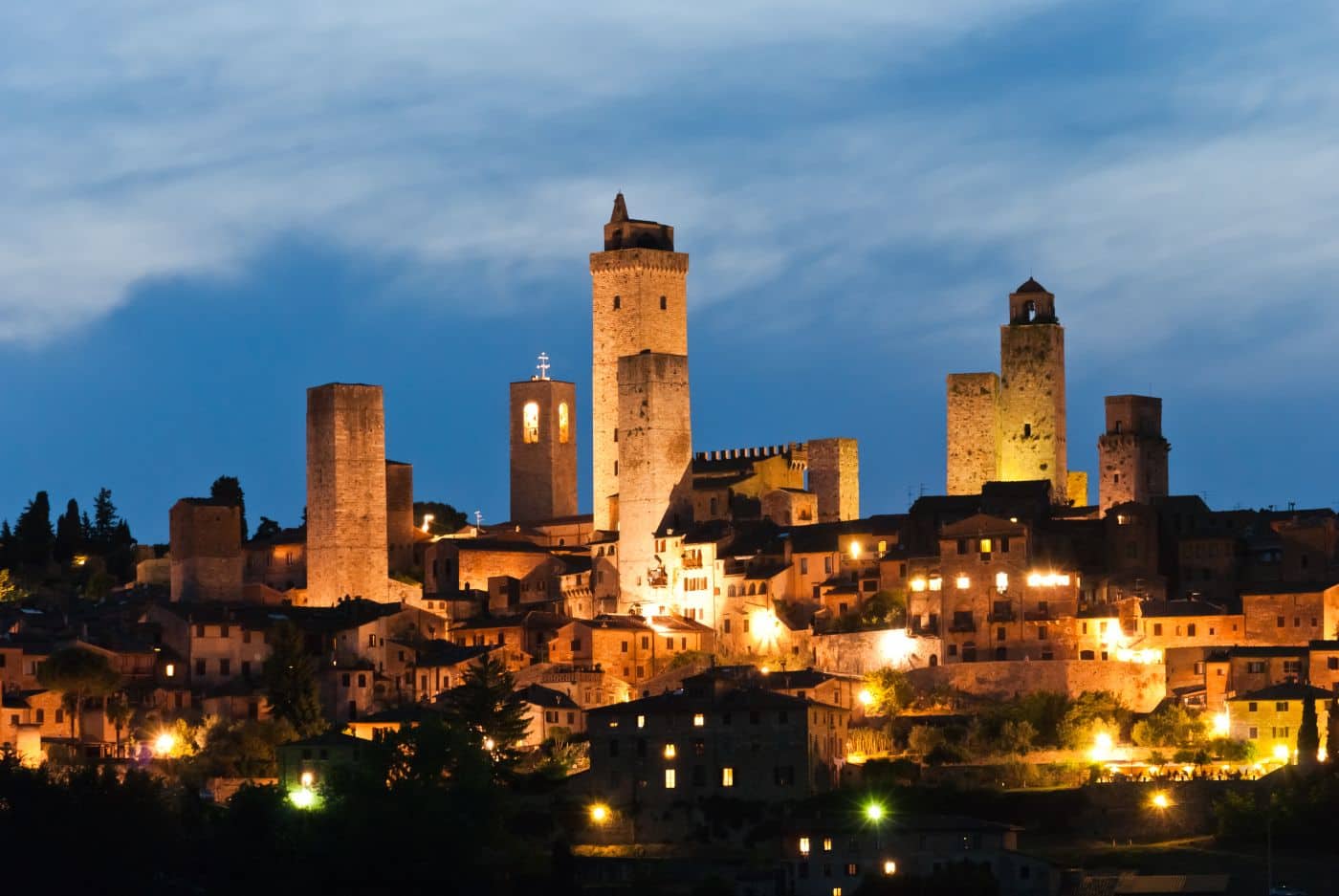 San Gimignano is a beautiful village in the province of Siena, famous for its towers. From the Middle Ages the wealthy families came to build up to 72. Today there are only 14. Torre Rognosa, dating back to 1200, is the oldest one, also known as Clock Tower. While the highest is Torre Grossa, with its 54 meters. The most characteristic ones are the Twin Towers, built by the Salvucci Guelph family, to rival the pair of towers of Ardinghelli family. By walking you can discover many more towers fused inside the modern buildings.

Monteriggioni is a tiny Tuscan village that has remained unchanged over time. The medieval structure is intact, as well as the walls, remained basically the original ones. In fact the city was never expugned. And almost all the defensive towers are still standing. They are 14 and surround the entire perimeter of the citadel. Through the route of patrol you can visit them, by walking on the walls and overlooking the watchtowers to enjoy a beautiful view. The village has been made famous all over the world thanks also to the video game Assassin’s Creed. 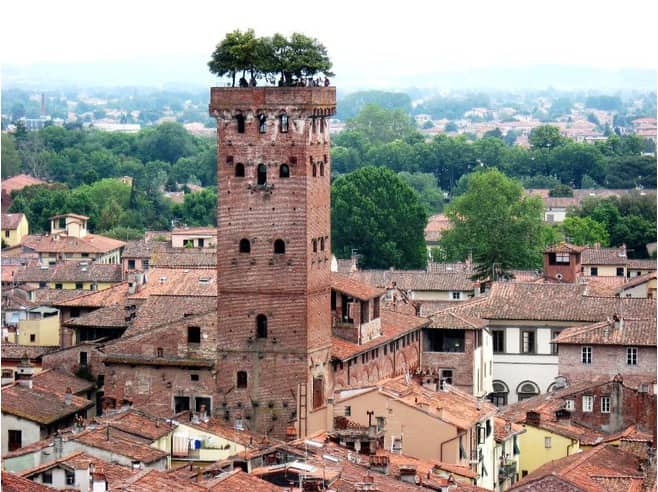 Guinigi tower is the most characteristic tower of Lucca. It is part of a building realized by the Guinigi, a rich family of merchants who dominated the city in the 14th century. It is the only remaining of over 250 private towers erected in Lucca during the Middle Ages. It is built of stone and brick and is more than 44 meters high. On its top there is a roof garden, where large oaks were planted, now secular. You can reach the top by climbing over more than 200 steps, to enjoy the beautiful panorama of the village and the hills of Lucca.

The Leaning Tower of Pisa needs no introduction. It is one of the symbolic monuments of Italy in the world. The inclination of almost 4 degrees, due to land subsidence, is what makes it famous. It is basically the bell tower of the Cathedral of Santa Maria Assunta, 57 meters high and built starting from 1173. Its fascination is increased by the legend according to which Galileo Galilei used it for his experiment on the "falling bodies", which in reality never happened. But the tower has never ceased to amaze and that is why it was proposed as one of the Seven Wonders of the modern world. You really never took a picture pretending to hold it? 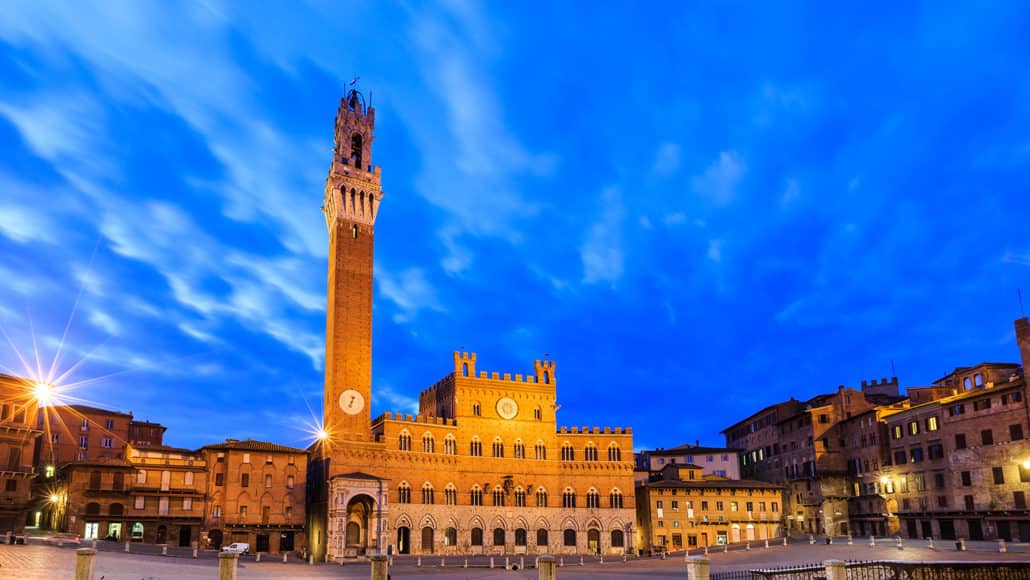 Mangia tower is the civic tower of the City Hall of Siena which is located in Piazza del Campo. Started in the 14th century, it is one of the oldest towers in Italy. It is about 88 meters high, with a square base and is made of brick, while the final part and the battlements are in marble. Its name comes from a singular character: Giovanni di Balduccio, one of the first bell-ringers marking the hours (before the installation of the automatic mechanism of the clock). He was called il Mangiaguadagni (the “Gain-eater”) or simply il Mangia (the “Eater”) for his famous expensive passion for food. He was also honoured with a statue that, lost for centuries, was found and restored and is still visible today in the courtyard of Palazzo Pubblico.