A walk to discover the most beautiful towns in Basilicata between history, food and tradition.

Basilicata is one of the most mysterious inland regions of Italy and on its Apennines, halfway between its largest provinces, Potenza and Matera, hides a world made of villages and small municipalities with a century-old history.

From the Ionian to the Tyrrhenian sea, Basilicata is a chest full of treasures. Let's discover a part of these treasures together!

The Sassi of Matera: the land of culture

The first round is probably the most famous place in Basilicata: the Sassi of Matera. They have the shape of a medieval village, but the Sassi are two districts of Matera, the Sasso Caveoso and the Sasso Barisano, formed by a particular type of buildings and houses created into the rock of the Matera Murgia.

The Sasso Barisano is particular for its road decorated with coats of arms dug out of the same rock of the houses and it is so-called because it was built along the road leading to Bari. The Sasso Caveoso, on the other hand, owes its name to the disposition of its buildings which reminds the cavea of ​​a Greco-Roman theatre. Populated since ancient times, they are no longer inhabited since the 1950s.

Separated from the Civita and the white cathedral of Santa Maria de Idris, they compose the historic centre of Matera. Since 1993 Sassi have been registered in the UNESCO World Heritage Site.

Pisticci: the land of lovers

After the famous Sassi di Matera, Pisticci is one of the most beautiful villages in the whole region. It almost seems to remember a small town in Andalusia with its white streets and reddish roofs. Pisticci, however, has nothing to envy to the other villages, being unique, it extends from the Lucanian Apennines to the Ionian coast, but what makes it unique is its historic centre, located on a hill and composed of a pile of white houses surrounding the ancient castle of San Basilio, built as a fortified farm around the seventh century, which became a castle with the construction of the central tower.

Pisticci is often chosen by lovers for romantic weekends for its scenic places that stage a unique bucolic landscape. Among these places, there is undoubtedly the walk on the arches of Terravecchia and the terrace of the pomegranate.

Craco is a splendid ghost town in Basilicata. In the sixties, the town was abandoned following a landslide, but today it is possible to visit it. The view of Craco is that of a medieval village where time seems to have stopped.

Despite the landslide and being uninhabited, Craco remains an enchanting place to visit so much that it has often attracted the attention of the world of cinema.

Calciano - The town of olive trees 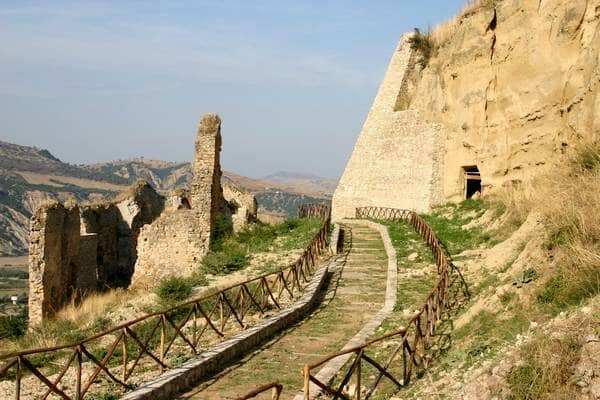 Along the small Lucanian Dolomites, a Norman village with bucolic features stands: Calciano. The small centre is considered the gateway to the Regional Park of Gallipoli Cognato and the Piccole Dolomiti Lucane and is a tourist destination for its history and typical cuisine. Among the typical specialities, there are the Lagane with beans or chickpeas and the "Gnummridd", famous lamb and kid rolls, certainly stands out.

But among the large areas of the landscape of the Lucanian Dolomites, olive trees are also the leaders, and right here in Calciano, in the Basento valley, there is one of the most important ancient oil mills in Basilicata, l'iAntico frantoio il Chiastrone. Here surrounded by centuries-old olive trees, different types of oils are stored, using traditional techniques, with delicate tastes to more intense ones. Thanks to the climatic comfort, the cultivations do not require special treatments and the oils can be genuine and pure. Passing through these areas and stopping to admire the beauty of the millenary olive trees and try the goodness of these flavours is priceless.

Pietrapertosa: the heart of the Lucanian Dolomites 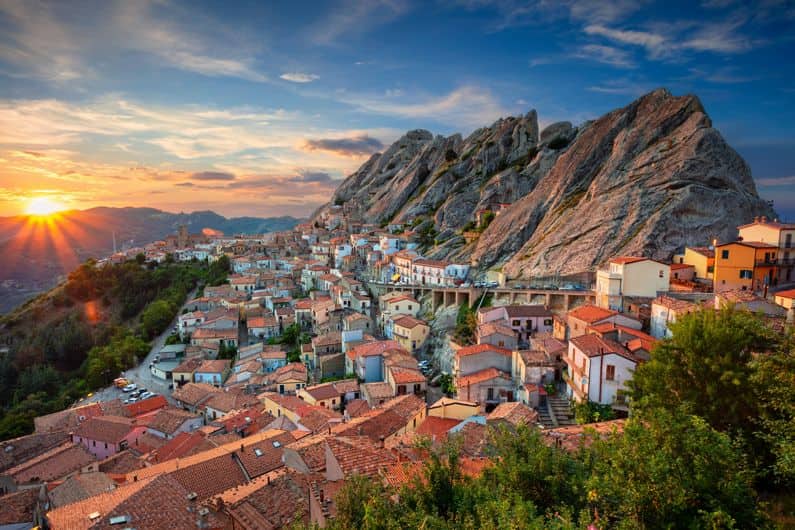 Last, but not least, the beautiful town of Pietrapertosa. Located on the heights of the small Lucanian Dolomites, they are environed by these rock banks, known as the badlands, which draw the surrounding landscape.

Pietrapertosa has been included among the most beautiful villages in Italy. Its particular shape is due to the whole town is built and nestled in the rock of the Lucanian Dolomites. The whole village is perched and branches off around a single main street that leads to the Norman-Swabian Castle on which stands a natural arch that served as a watchtower.

These are just some of the most beautiful villages in Basilicata, but there are dozens more moving towards the sea like Metaponto or moving towards Puglia with the beautiful Venosa, the city of the poet Horace and Aglianico del Vulture.

Basilicata is one of the most underrated regions, but it hides priceless treasures. What are you still doing there? Come to Basilicata and enjoy its beauties.