The hospitality culture on Capri island

Capri island has always been a destination where the traveller could feel at home. In our article, you will find out about its hospitality history and more!

Capri island is a real jewel of the Mediterranean Sea which offers a privileged view of the Gulf of Salerno, Sorrento and Naples.

In Capri, you can taste the scent of the sea from everywhere. You can go beyond the imaginary by discovering the poetic Grotta Azzurra, you can make an excursion to see the legendary Faraglioni so closely you feel you could touch them. In Capri, you can be admiring the sunset from the top of Mount Solaro and then go down among the rocky coves and dive in the extraordinarily transparent waters. You can see the whole island turning in a boat and then go for a walk in the famous Piazzetta and get lost among the alleys of the historical centre.

Capri also named two of the tastiest dishes of Neapolitan cuisine, now famous throughout the world. The Caprese salad is a typical meal made with fresh mozzarella cheese accompanied by seasonal tomatoes and seasoned with olive oil, salt, oregano and basil. The name is deceptive as it can make you think of a dish made of vegetables, but the sense is to enjoy a full meal that gives the same freshness as a salad. It is both a tasty and refreshing meal, perfect after a sunny day spent at the beach or around the wonders of the island.

The Caprese cake, a typical dark chocolate and almonds dessert, was born from the bizarre tale of a cooking mistake. It seems that the cook of a small Capri workshop in vogue in the 1920s forgot to add flour to the dough he was preparing, but when the disaster resulted tastier than he expected, he began to propose the wrong recipe. And the rest is history.

Capri architecture has its roots in ancient history. Touring the island, you can find medieval and Renaissance buildings as well as old Roman estates. The oldest building is the Certosa di San Giacomo, committed by Count Giacomo Arcucci. It was built in 1371 and has now become a high school. However, the island continued to fascinate its visitors throughout the centuries to come. Among the most recent buildings, visitors can find Villa Lysis (1904) committed by the Count of Fersen in voluntary exile on the island. Villa Lysis became an assembly point to all the artists who, after visiting the island, began to write and talk about its beauties.

In short, there are several experiences to do and places to visit on Capri, which is why impeccable hospitality is an indispensable business card for the island.

A brief historical journey about feeling at home on Capri

Capri history tells us of distant, even prehistoric times, in which its pristine and wild places were the cradle and refuge for many civilizations.

Emperor Tiberius decided to voluntarily exile in Capri, away from the pressing political life conducted in Rome. He was so fascinated by the island that he decided to stay here until his death at Villa Iovis (also known as Palazzo Tiberio). Today, it is one of the places to visit on the island. However, he was not the only ruler to appreciate the landscapes and the quiet life of Capri. Several Roman emperors commissioned estates construction on the island because they felt at home away from the chaotic capital life. Today, Capri hosts twelve of them.

In the 19th century, the romantic artists found in Capri an authentic refuge. They were enchanted by the evocative sceneries offered by the majestic landscape and the rupestrian and uncontaminated life of Capri. On the island, they found inspiration, so they could do anything but tell about its beauties.

Capri charm was so impressive that the island became one of the Grand Tour destinations. This itinerary began a century before, and it was born from the then embryonic idea that travelling was a source of personal knowledge of the world. Thus, all the young people of the aristocratic houses of that time took trips around Europe to satisfy their hunger for knowledge. Alongside many major cities such as Rome, Florence and Venice, Capri island earned its place as one of the Grand Tour destinations.

During the 1950s and 1960s, Capri transformed into an appealing destination for prominent people from all over the world. The Caprese dolce vita is remembered as the golden age for the island. In the post-war era, the richest avant-gardes could not wait to forget the horrors they had just experienced. Dancing all night long, eating delicacies and living in lust represented the hard-won freedom, and Capri was the perfect place to live a free and thoughtless life thanks to its well-known hospitality.

2 Pini apartments, a place to feel at home on Capri 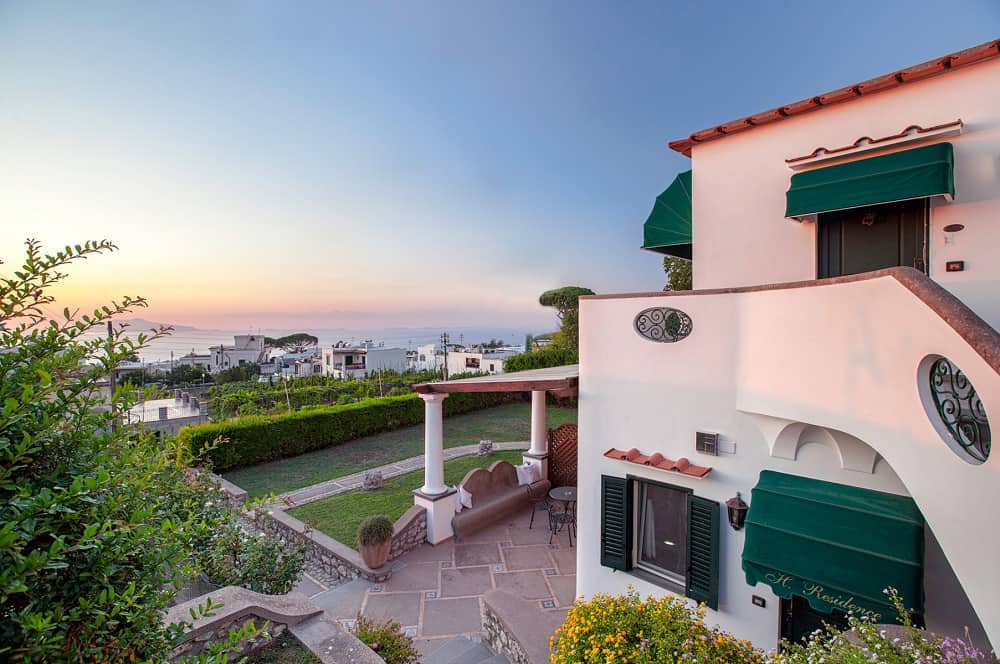 Starting from the middle of the 20th century, Capri began to figure out how to develop its economic growth. The island economy has progressively changed from purely agricultural life to massive tourism improvement.

The remarkable characteristics its visitors had found during the centuries progressively became the island economy strong point, and tourism is now the island primary economic driver. Today, it is enough to name Capri to evoke spectacular landscapes and a luxurious and carelessness lifestyle. In short, its reputation precedes it. That is why every structure on the island aims to make visitors feel at home.

Located in Anacapri, 2 Pini is a structure that fully represents the renowned island hospitality. A stone’s throw from Piazza Vittoria,  2 Pini is a 7-apartments complex surrounded by greenery. All accommodations are fully furnished and equipped with a private terrace that offers a breathtaking view of the Gulf of Naples. Also, the hotel has an outdoor swimming pool with Jacuzzi and a solarium.

2 Pini history dates back to the 1950s when it was still a small bar that offered travellers refreshment from the heat of summer days. Surrounded by centuries-old pines, the bar was a delight for those thirsty and exhausted tourists who stopped from long but pleasant summer walks to discover the island beauties. Then, since Capri economy progressively transformed, the bar has gone from a simple temporary refreshment point to an accommodation facility. The principle is the same, so somehow the family tradition is maintained.

2 Pini exceptional location is a perfect place for a pleasant stay. The structure locates in the centre of Anacapri, a stone’s throw from the historic centre and all the essential services such as public transport and shops.

The structure does not offer accommodation only. At 2 Pini, you can book guided tours on the island and boat tours. Also, you can enjoy typical dishes and island delicacies at the Restaurant Due Pini.

As you can see, it is a place to feel at home on Capri indeed.